I see fixed gear freestyle bikes all over the place these days. Being on the fringe of that movement (I like riding BMX, and I like riding fixed gears, but I haven’t really taken the plunge into building up and riding a bike that does both) I find it interesting that FGFS bikes are beginning to look much more like 26″ freestyle BMX cruisers. It is a major shift from their initial starting point as a track bike. What sets FG bikes aside from BMX bikes is the lack of a freewheel, but it also means you can’t manual the bikes, which also happens to be one of my favorite things to do while cruising around. Or whenever I’m on a bike for that matter. It could be that is why I decided to take a closer look at the 26″ BMX Cruisers from SE Racing. I saw one of these rolling by the other day on the streets of Oakland and I began to wonder how these would work in place as an urban commuter.

Looking at the geometry, other than the seat tube running on the short side for an urban transportation application, the 71º/73º head and seat tube angles are right inline with classic MTB angles. With a long seat post, riding a giant BMX bike to work as a daily driver certainly appears possible. However, if you were thinking of running it in place of a single speed urban machine, with a high post, the 29″/ 700c Big Ripper version might be a better choice. 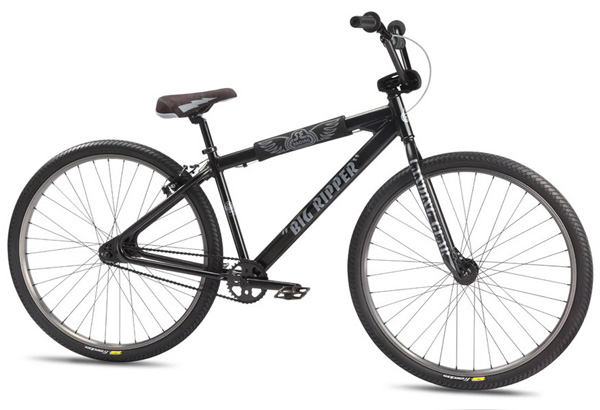 In fact, assuming you don’t have a long inseam, it is entirely feasible that one could, with the swap of a few components, modify this machine into a ridiculously fun commuter that wants to not only bunny hop every pot hole in town, but also take the path less traveled on the way to the office. (not to mention play in the dirt and on the track on the weekend) In fact, the more I look at this rig, the more the gears in my head keep turning. A smile forms as I see myself coasting a long manual down Valencia Street as the other riders envy my ability to hold the front end up and coast. (do that with your fixed rear hub!)

A complete bike will set you back a measly $699. She comes in a bit on the portly side at a listed 28.4lbs., but a few component changes could easily shed some weight. SE Racing also offers it in the classic Quadangle Looptail if you want it in steel, with its retro eye catching lines.