We’re huge gear heads here at Bermstyle. Especially when it comes to packs. This year alone I acquired three new packs and bags to carry gear in. We’re always looking for the right tool for the right job, and with backpacks, it’s no different.

At the time this item was purchased, I was commuting 5 days a week via motorcycle to Marin from San Francisco. I had a waterproof messenger bag that was doing the job just fine for carrying stuff when I just needed a few things, but after several years of toting messenger bags around full of stuff, I made the switch back to backpacks for larger loads. Try carrying a messenger bag around Interbike for three days full of crap, and after suffering subsequent neck and shoulder pains, you’ll see what I mean. Yes, messenger bags are great, and hip, but they just aren’t suitable when it comes to carrying for example, a full load of groceries on your bike. As my current back packs weren’t waterproof there was a need for a bag that was. Enter the Chrome Roll-Top Pack.

The pack’s low profile makes it handle well at freeway speeds, as well as around town. Photo: Inga Beck.

I was hesitant at first, as these bags don’t come cheap at $200 retail. In addition, I was uncertain of what size pack to go with. I was planning to use it while riding bikes around the city as well as the motorized sportbike at freeway speeds, so the bag had a few requirements: 1. Be water proof. I wanted to be able to put camera gear in the bag, and not have to worry. 2. Stability: it couldn’t shift around while riding, and be somewhat aerodynamic at freeway speeds, as well as be secure. 3. Well, at the time, that was about it. The waterproof bag was really what I was focusing on at the moment, and while I had never owned a pack or bag from Chrome, I was fond of their asthetics, and thought they had a good looking product, so I called them up and went with the Ivan, their medium sized Roll-Top pack.

The medium sized Ivan is quoted at 1680 cu. inches of stuff. That sounded like enough space to do some shopping on the way home, and at 20 x 14 x 6, wasn’t too big. I went with a brown one, as it was this year’s color for me.. cause come on, brown is the new black! Plus, I’m fond of gear that looks good after I’ve dropped it in the dirt. Gear is meant to be used.

roll top pack in use

view of the roll top pack

As you can see from the images, the pack sports a low profile unlike many other packs. This unique shape (in addition to the roll-top feature) is what really sets this pack apart from other cookie-cutter back packs. Instead of sticking out, the pack sits a bit wider, much like a messenger bag. The shape and profile of the bag also allows for carrying unique loads securely that conventional pack can’t, like handle bars or suspension forks. It also works great for carrying groceries. Because the bag can be carried open while riding a bike, it’s possible to fill the bag to the rim and ride a bicycle from the grocery store home, with a loaf of bread sticking out of the top.

Chrome roll-top bag packed with a Totem Suspension fork, about to head to the Post Office.

This pack works great for shopping. One grocery basket’s contents will fit in the bag well if packed right.

There are two main compartments that enable you to separate your gear; one has a water-proof encasing, while the other is parallels it. The main compartment is close-able by rolling it top down- hence the name “roll top pack.” The sub compartment features a zipper enclosure and is a bit smaller.  Slightly below that is an additional compartment that is also weather proofed, with a flap that hangs over it to protect it from the elements. A water proof zipper also aids in this. This compartment fits a laptop very well. There are also two external pockets on the outside that are closed by flaps. An inovative buckle is used to close and cinch them tight. Housed between them, are a number of daisy chain lash points where one could mount a reflective light or blinker.

Mullet Cycles: all in on mixed wheel sizes 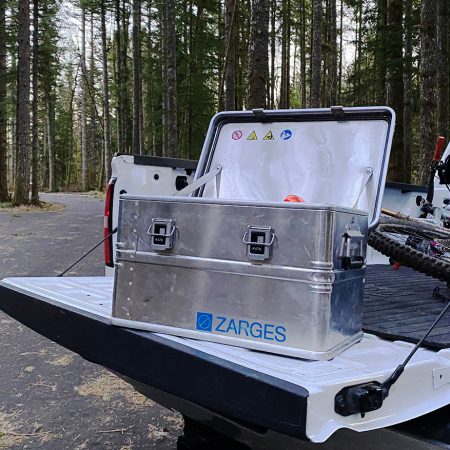