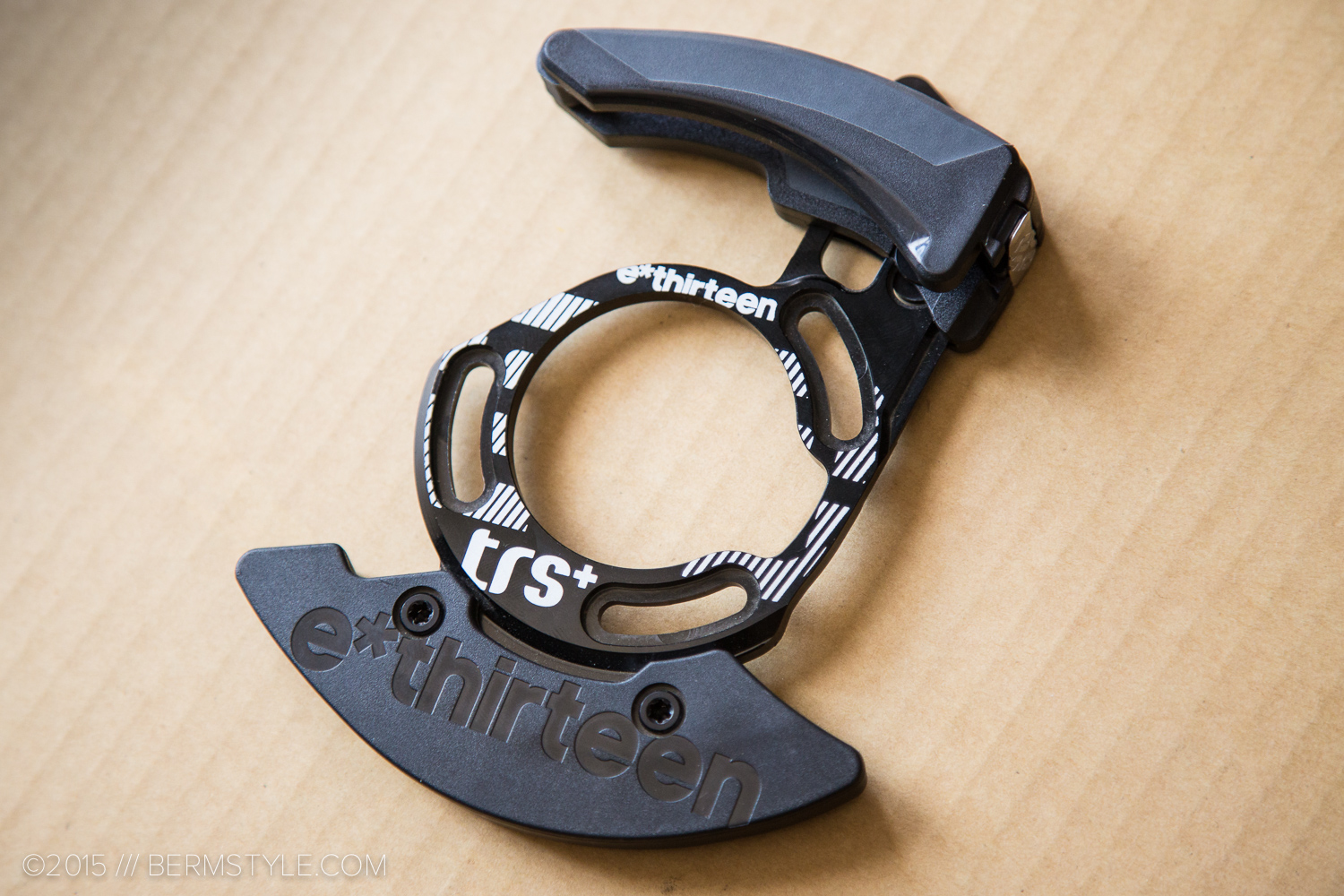 One-by drive trains used to be limited to the downhill set. Our 6″ travel bikes were heavy and had 8, then 9 speeds, but we pedaled everywhere on them anyway. That is, until they evolved into 8″ travel, 45 lb. behemoths. And unless you wanted to end up on your face when sprinting out of the saddle, a chain retention device was mandatory.

We’re still riding bikes with 6″ of suspension travel these days, but they weigh much less than they used to, and with the advent of the wide range drive train, 1x drive trains are more common than ever. 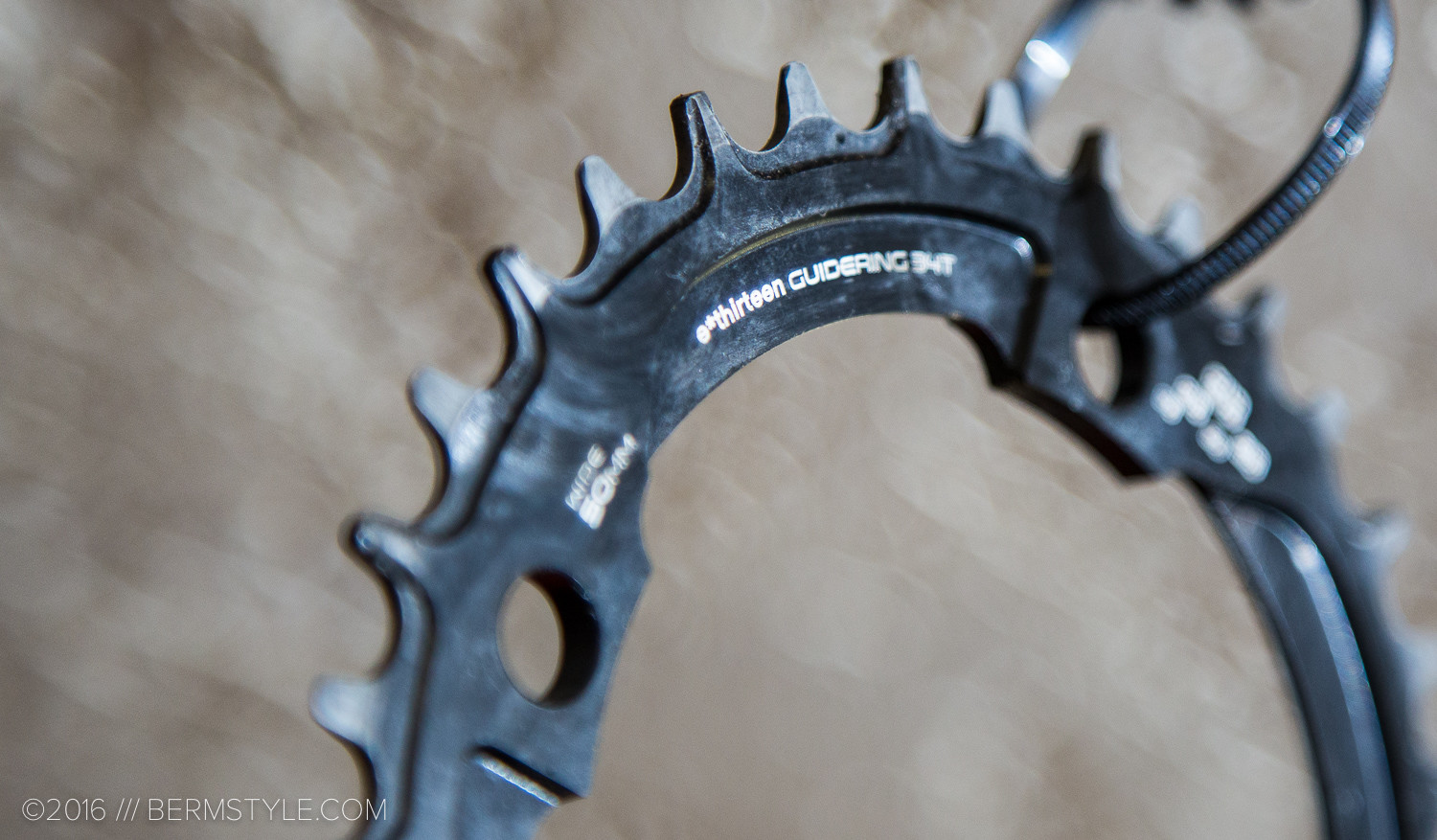 A closer look at the E*thirteen Guidering teeth.

There was a time when I wouldn’t be caught without a chain guide, as some of my biggest injuries were a result of chain derailment at inopportune times. I’ve been running E*thirteen’s Guidering (paired with a Shimano XT clutch derailleur) for over a full season without a guide on my Santa Cruz Highball XC hardtail, trusting in the retentive qualities of the E*thirteen Guidering, and it’s done a fantastic job. 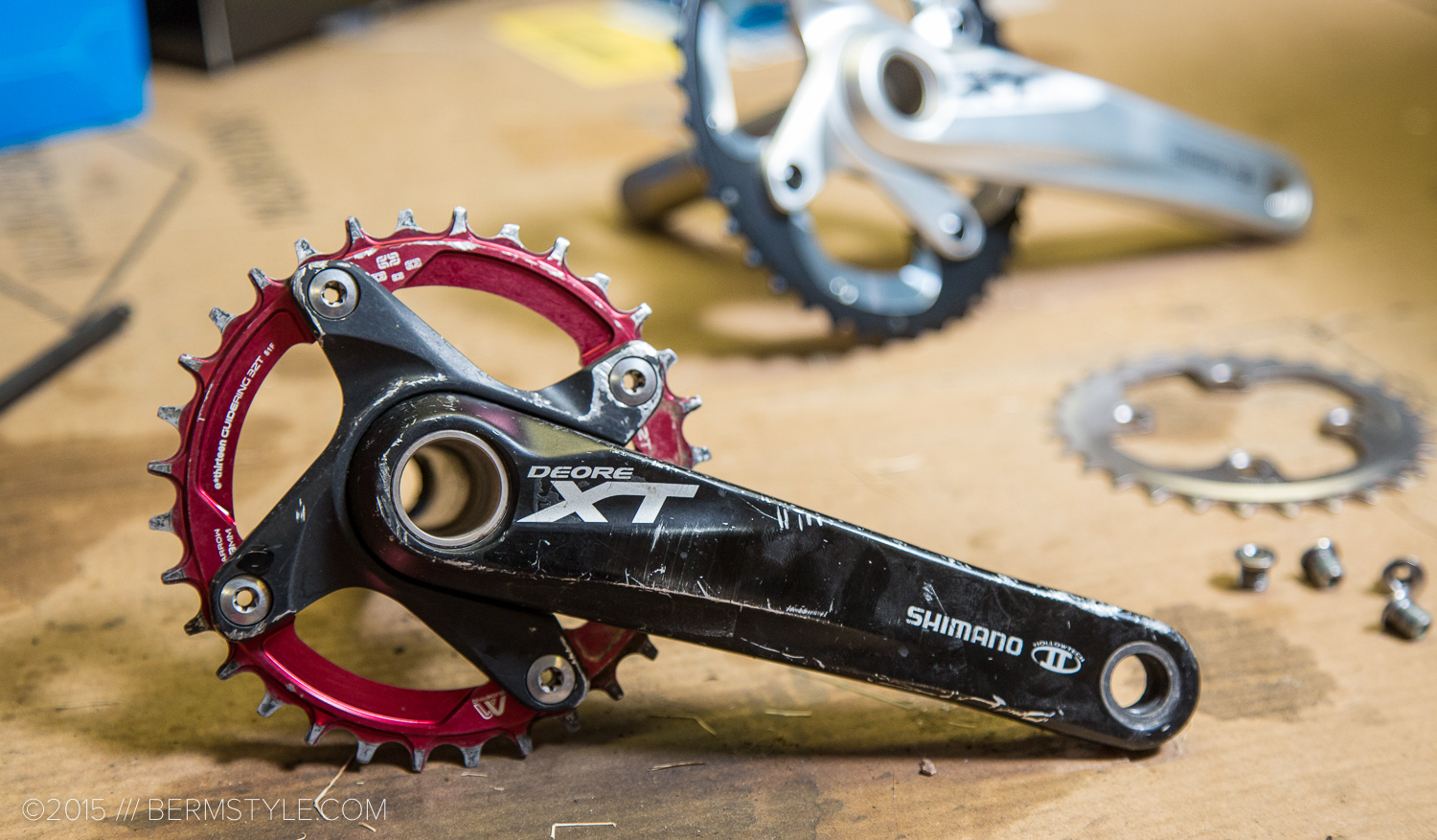 After a season of use, the red Guidering (and XT crank) are showing signs of wear.

Guiderings are compatible with 8,9,10 and 11 speed drive trains and available in 3 different colors, with ring sizes ranging from 30-38t. They also feature a flip-flop design that allows you to choose a 49mm or 50mm chain line. Like the other rings I’ve used in the past from E.13, they’ve been reliable and long wearing. After a season of riding, the hold of the teeth aren’t quite as tenacious though, so adding a lightweight guide like their XCX is a nice bit of insurance for those wishing to squeeze extra miles out of their ring. 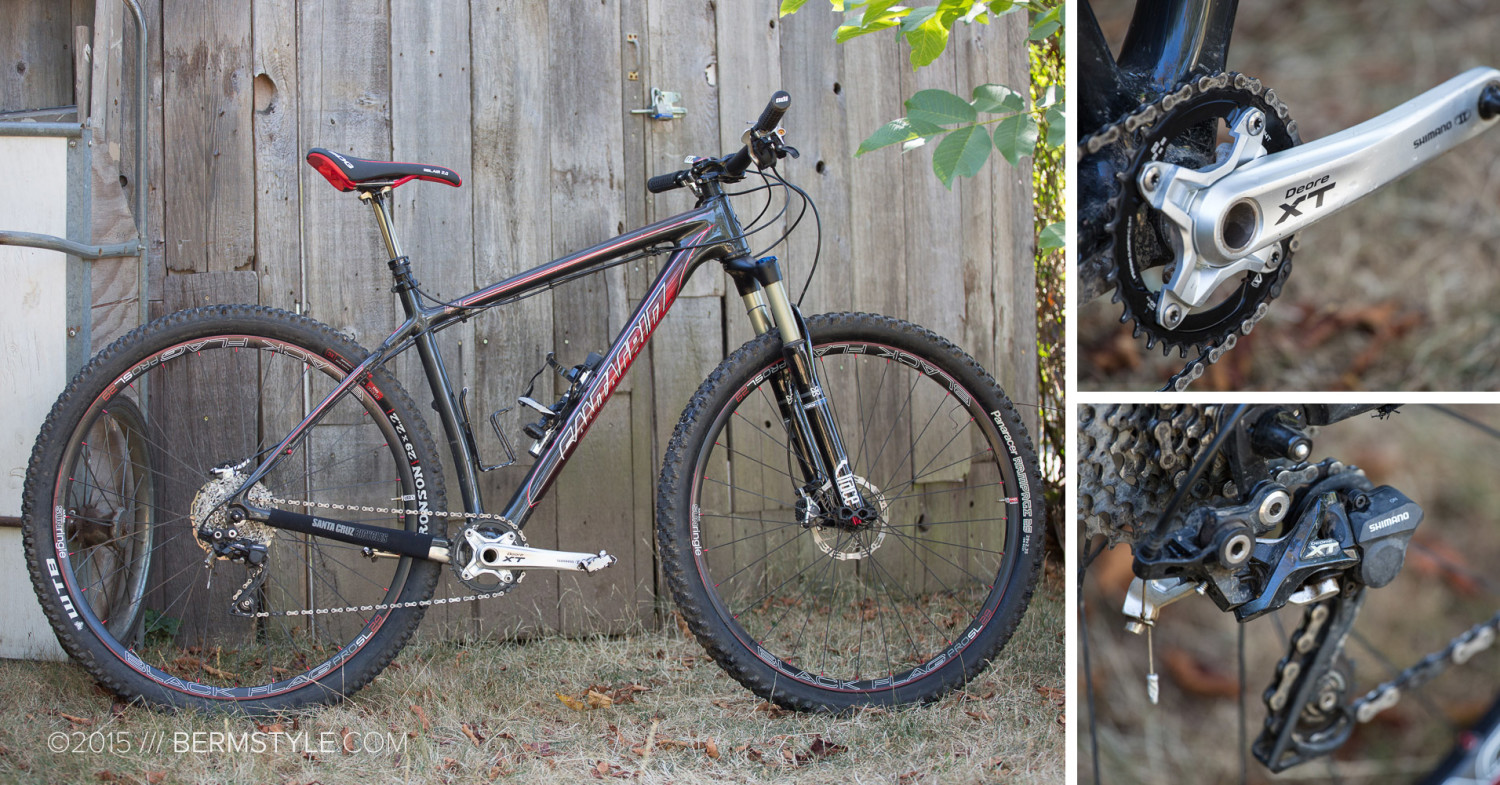 The E*thirteen Guidering worked so well on my Santa Cruz Highball (in conjunction with the XT clutch derailleur) that I have left off the top guide. 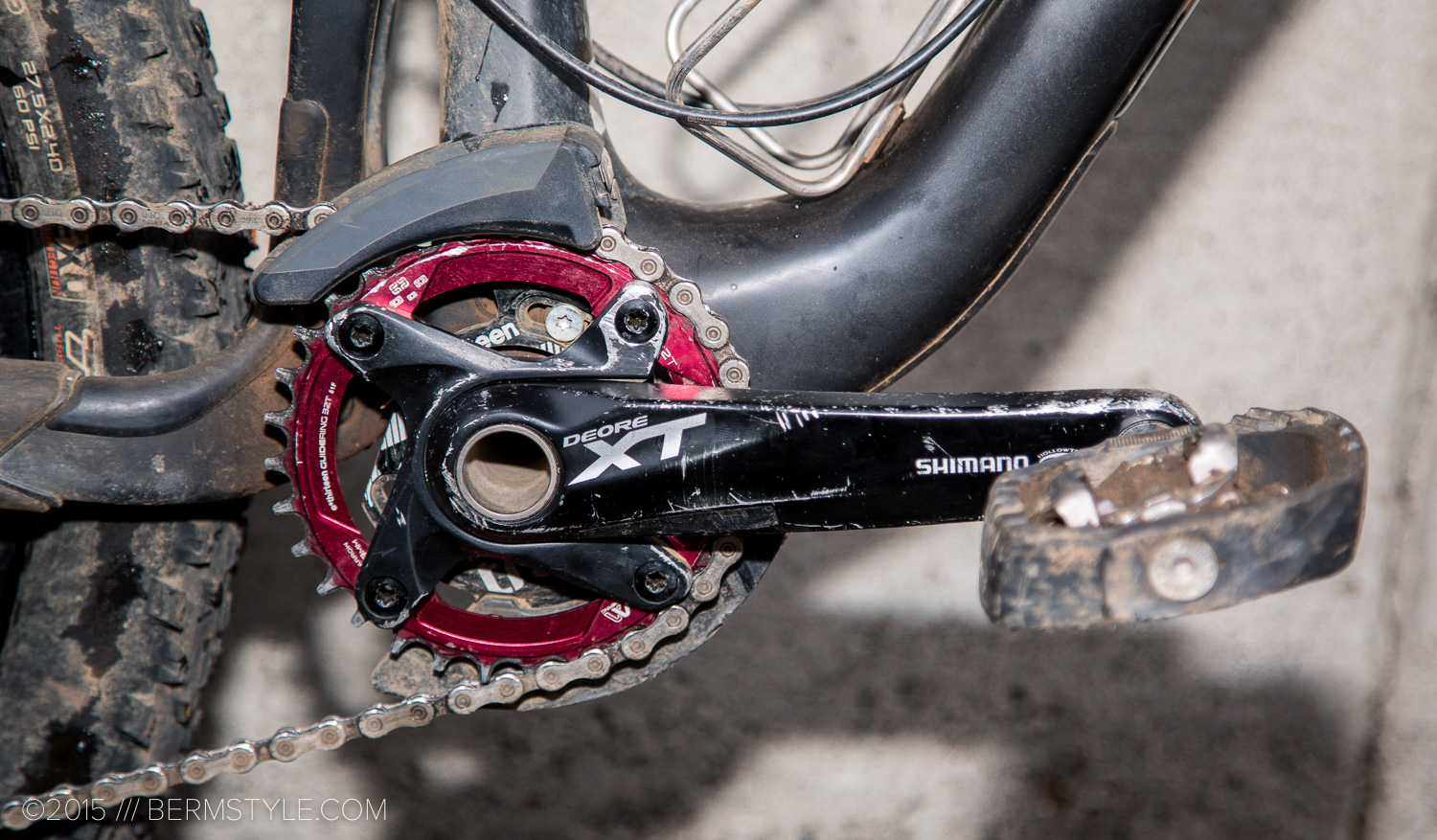 Guidering and TRS+ mounted on my Santa Cruz Nomad.

The Guidering has been a solid component of my chain retention strategy, but when it comes to charging down the mountain, I’m not willing to take chances.

Though I’ve grown to have a lot of faith in that chain ring, (they work great when you’re riding in a straight line, especially when they’re new) I’ve never once gone without a chain guide on my Nomad. With 6+” of travel and go-fast geometry, I go a hell of a lot faster than I do on that hardtail. I’m chucking drops and attacking root and rock filled turns at high speed, braking late, and pedaling furiously out, conditions where losing a chain becomes a possibility.

Take the following image for example: 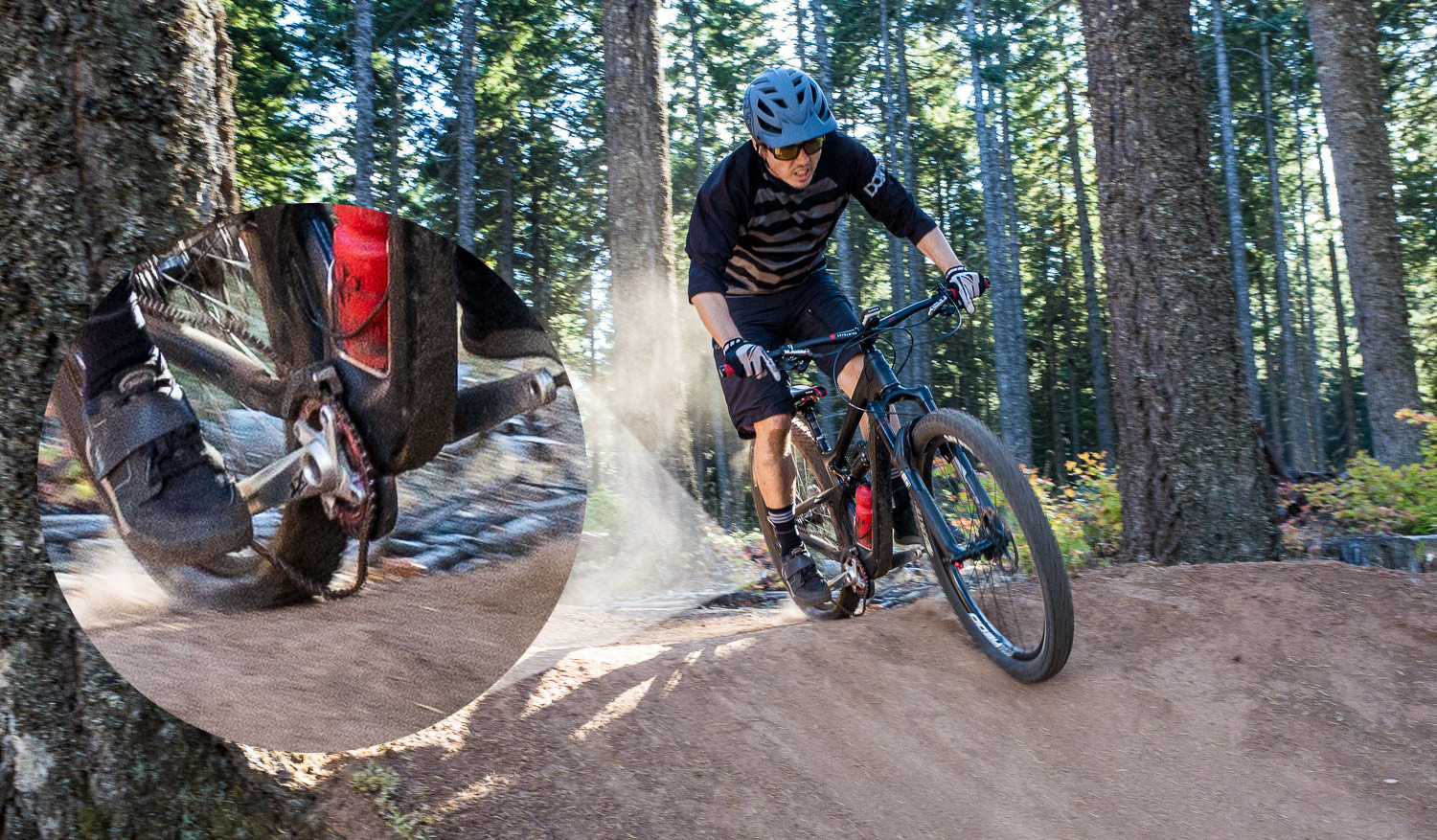 When the rear suspension is fully loaded — even with a clutch derailleur — things can happen.

When we go into corners hard, the suspension fully loaded, even with the clutch, we’re still creating slack in the chain. Add some side to side movement, some pedaling or back pedaling and you’ve created a chain drop scenario.

When I initially built up my Nomad, I ran  light security, the E*thirteen XCX guide. It’s lightweight and provides security. Without the security of a bash guard though, I was avoiding lines that could result in damage to my chain or ring. 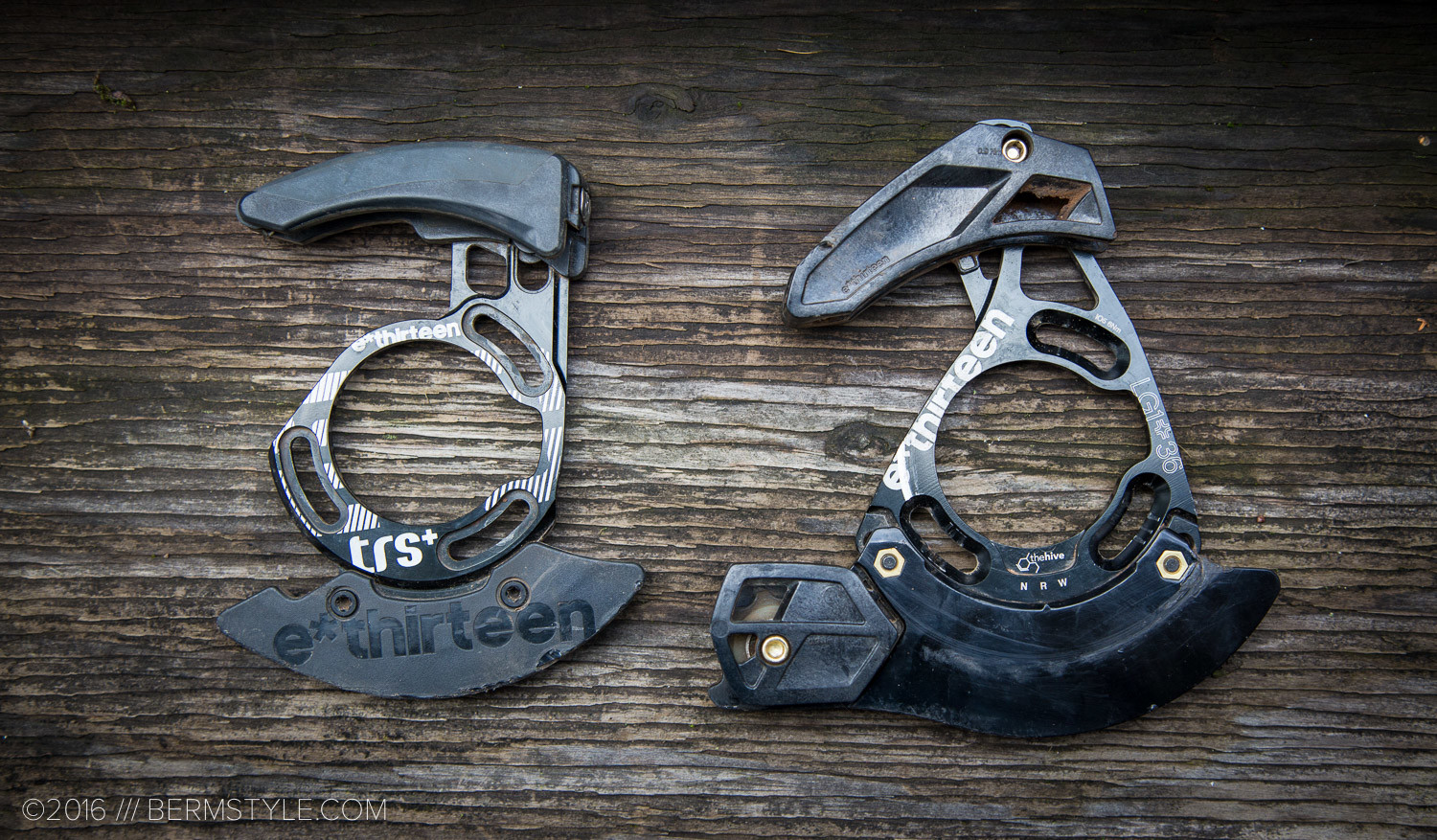 That’s why I was elated when Chris at E*thirteen sent me a TRS+ (Trail Security) Guide to try. The TRS+ single ring guide is essentially a pared down enduro specific version of the popular LG1+ DH chain guide. The TRS+ drops the lower slider, relying on the clutch derailleur to do the duties of keeping tension on the chain. Designed for enduro and aggressive all mountain use, in addition to the top slider, it features a bash guard and the ability to get rambunctious on trail features without the fear of walking home with a bent ring or snapped chain. 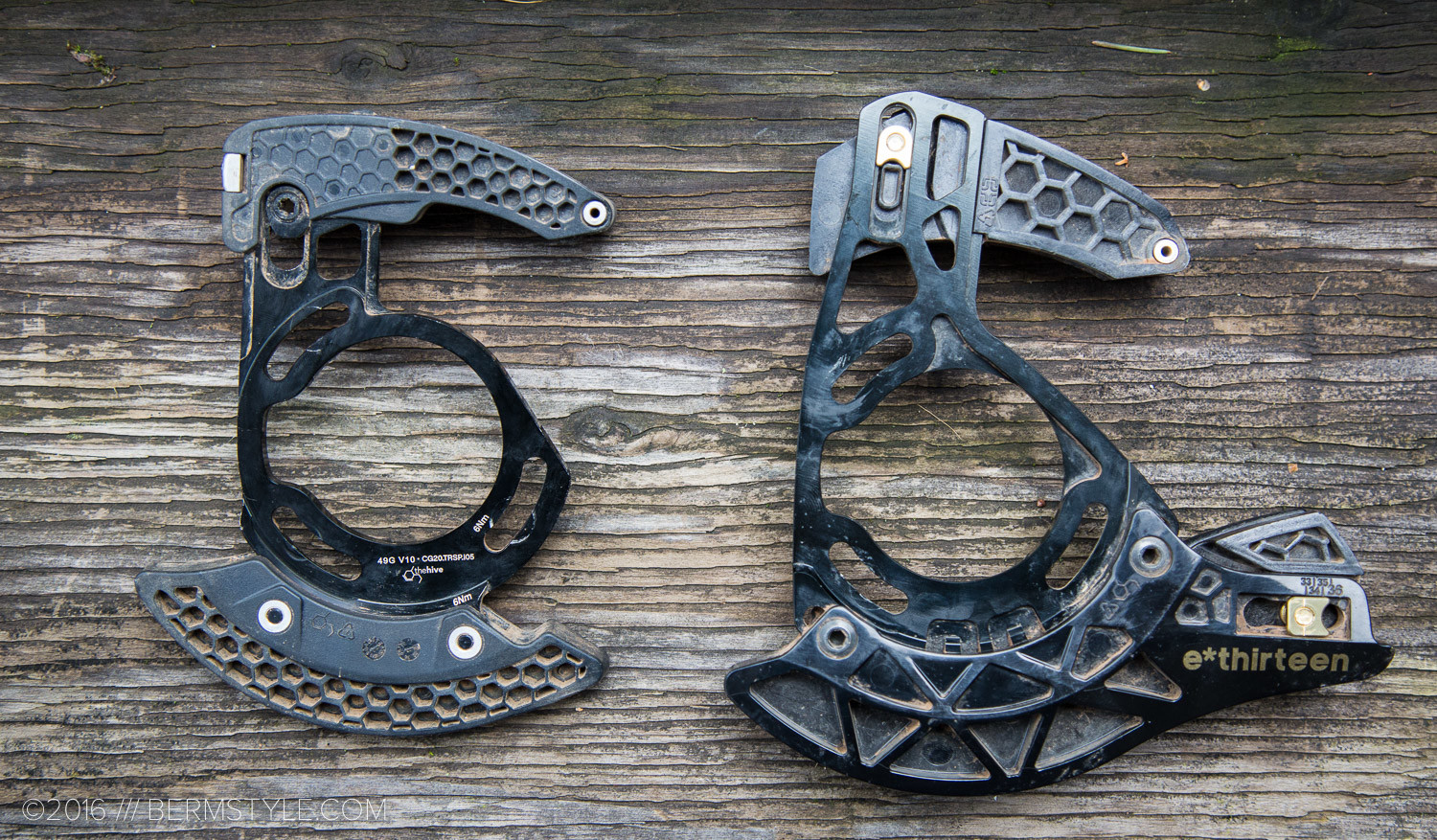 The upper slicer can be opened without tools for servicing the chain or removing the cranks. With this iteration, the upper slider was redesigned with a co-molded rubber interior, which adds durability and reduces noise. (the previous polycarbonate parts was known to become brittle over time after exposure to lubes and cleaners) 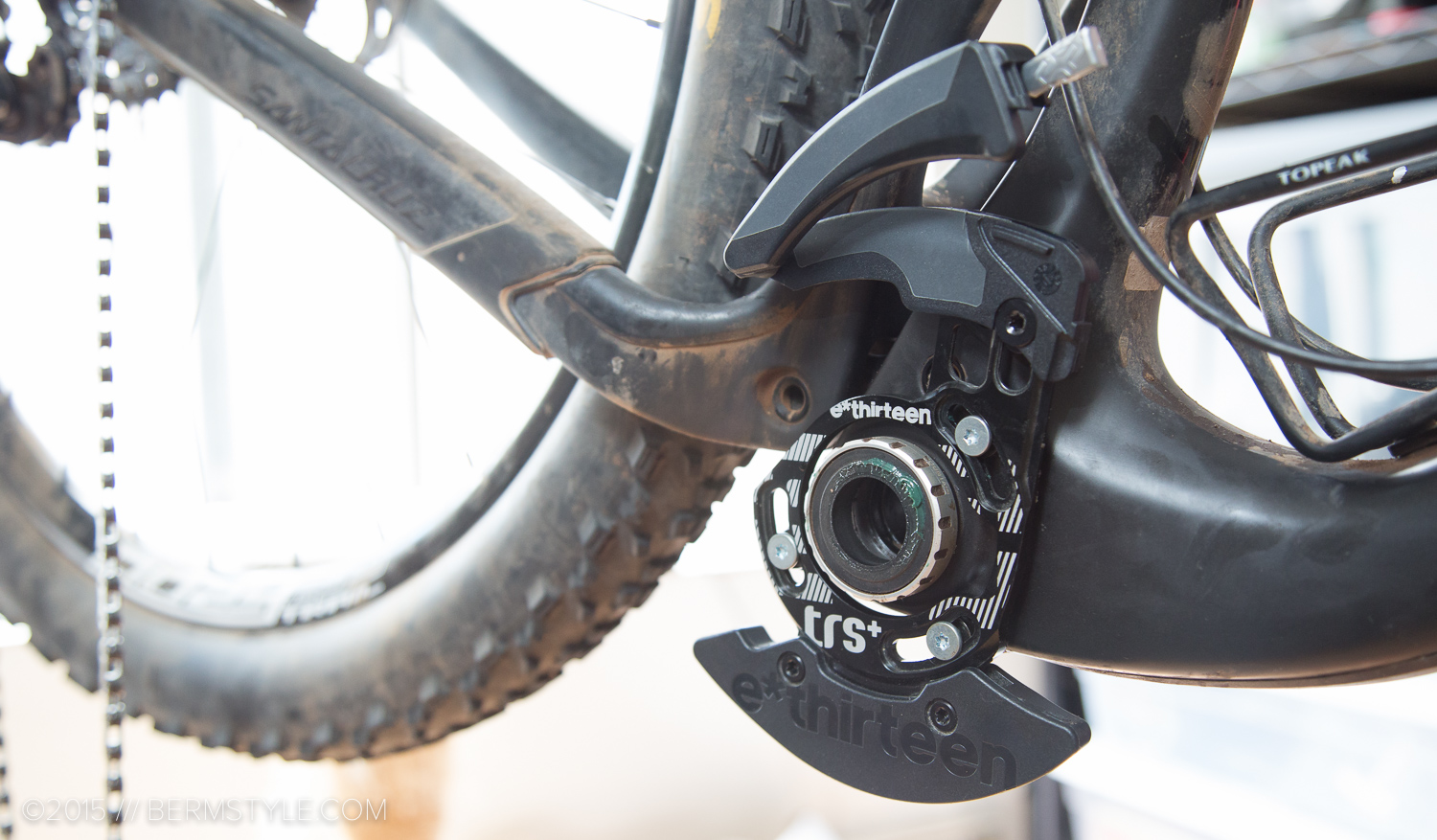 Installing the TRS is straightforward, though there are a few variables involved. Our goal is to have good chain line to avoid undue wear and tear on our chain, or rubbing on the guide. The Guidering can be flipped on the crank to adjust the chain line, and the TRS+ includes a number of washers to use when dialing in the spacing. Being able to open the upper slider and rotate it up is especially helpful during the installation process.

Once you’ve sorted out the chain line, the upper slider worked best at the lowest setting possible that doesn’t rub on the crank. All the bolts are a torx head, which is especially nice. 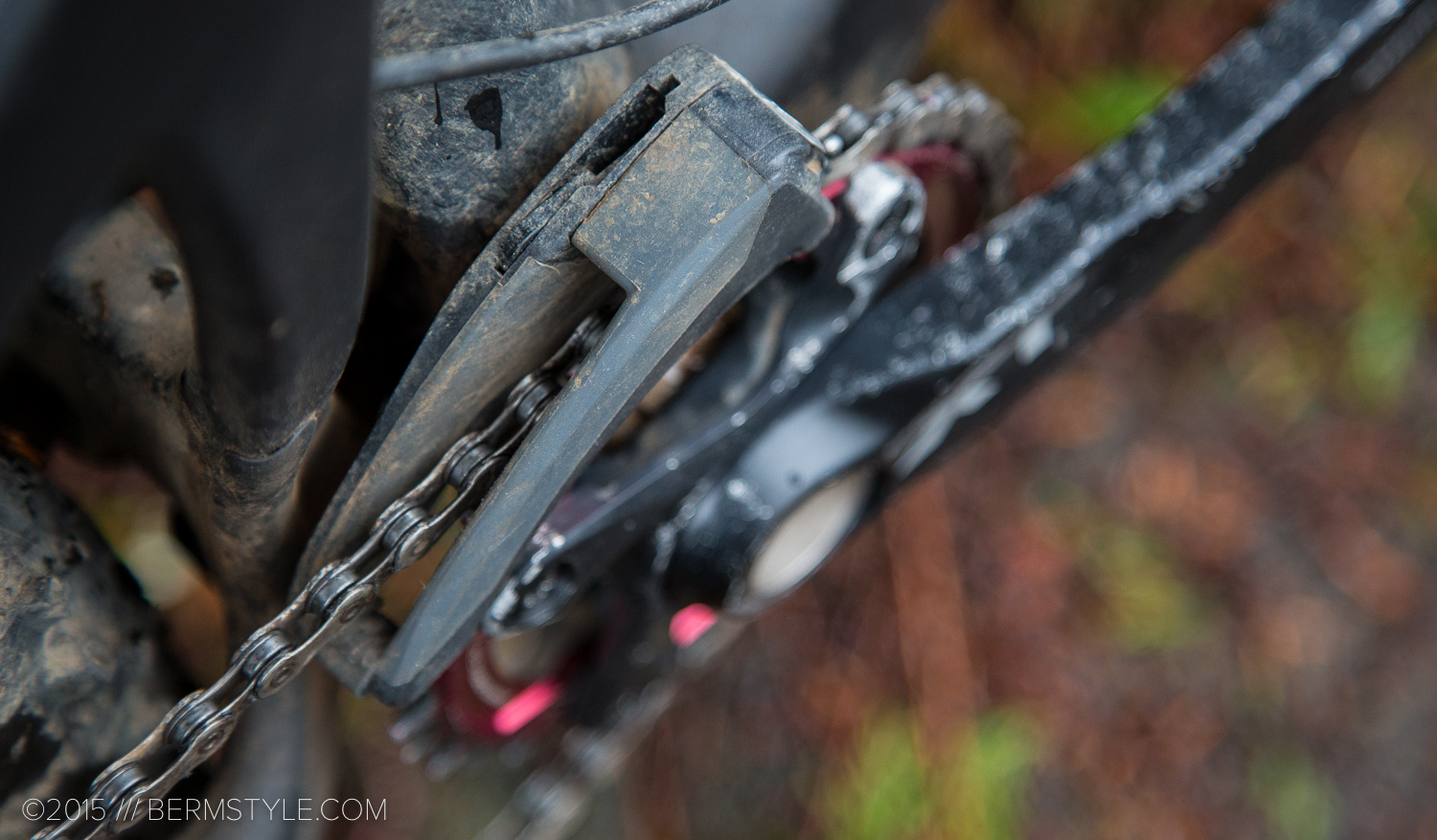 The TRS+ has been drag free and without noise.

The ability to open the guide without tools is useful on the trail as well as in the workshop. Though I rarely had issues with E*thirteen chain retention systems, (I had been moving back and forth between the XCX and LG1 before I had the TRS+) there is specific a section of trail at Demonstration Forest where I’ve dropping chains on multiple occasions. It’s a rough and fast straight that shoots into a root filled turn where I bottom the suspension, then crank hard to get back up to speed for the following climb.

The chain came off when I back pedaled to set up for the turn, jamming in the upper guide. With the new tool-less top slider, removing it was as easy as popping the clip open, placing it back on the ring, and clipping it shut.

On one occasion though, it appeared that the top guide had popped open of its own accord. Turns out I unclipped while drifting into the turn, and kicked the guide open with my foot. Adding a washer to the pedal looks to have provided enough clearance to eliminate the issue, as it’s only happened once since then. If you run wide shoes and platforms and like to move your feet around on the pedals, it may be worth adding an additional pedal spacer for clearance. 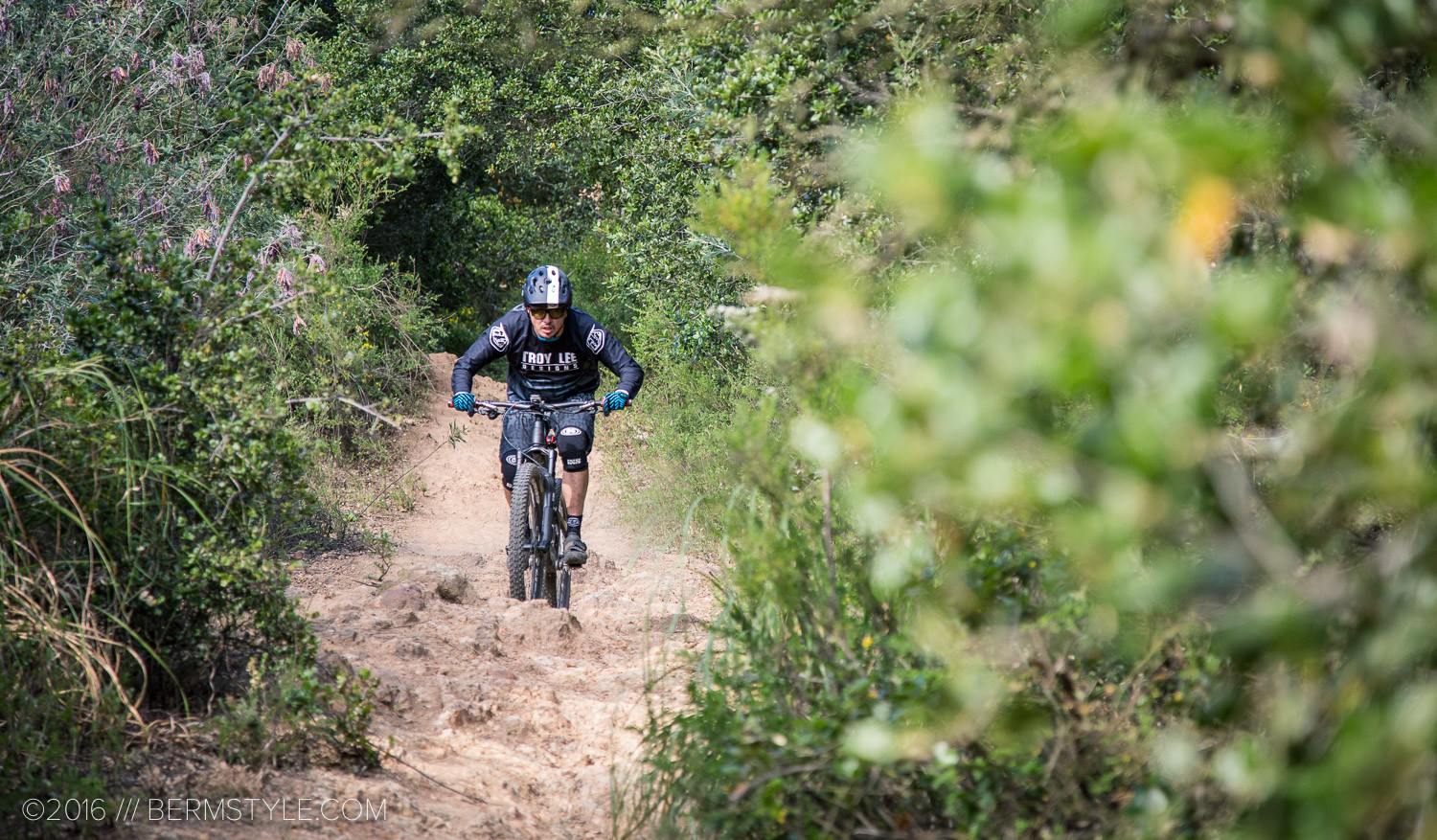 The additional weight of the bash guard is more than worth it for aggressive riders.

E*thirteen is aware of potential issues with the clip and have since redesigned it to be more robust, so this issue is unlikely to happen with models currently for sale. (our sample was from the initial production run) Other than that one section of trail, the guide has proved reliable, and the additional the security of the bash guard offers peace of mind when hopping up rock ledges or logs. I’ve had more than a few rocks fly up towards the bottom bracket while charging rock gardens, and other than a few small dings in the guard, blasted through unscathed.

The cool thing about the mount is you can choose from one of three sizes of bash guards based on your chain ring size; the TRS+ ships with 3 bash guards sized to fit a 30, 34 or 38t ring. 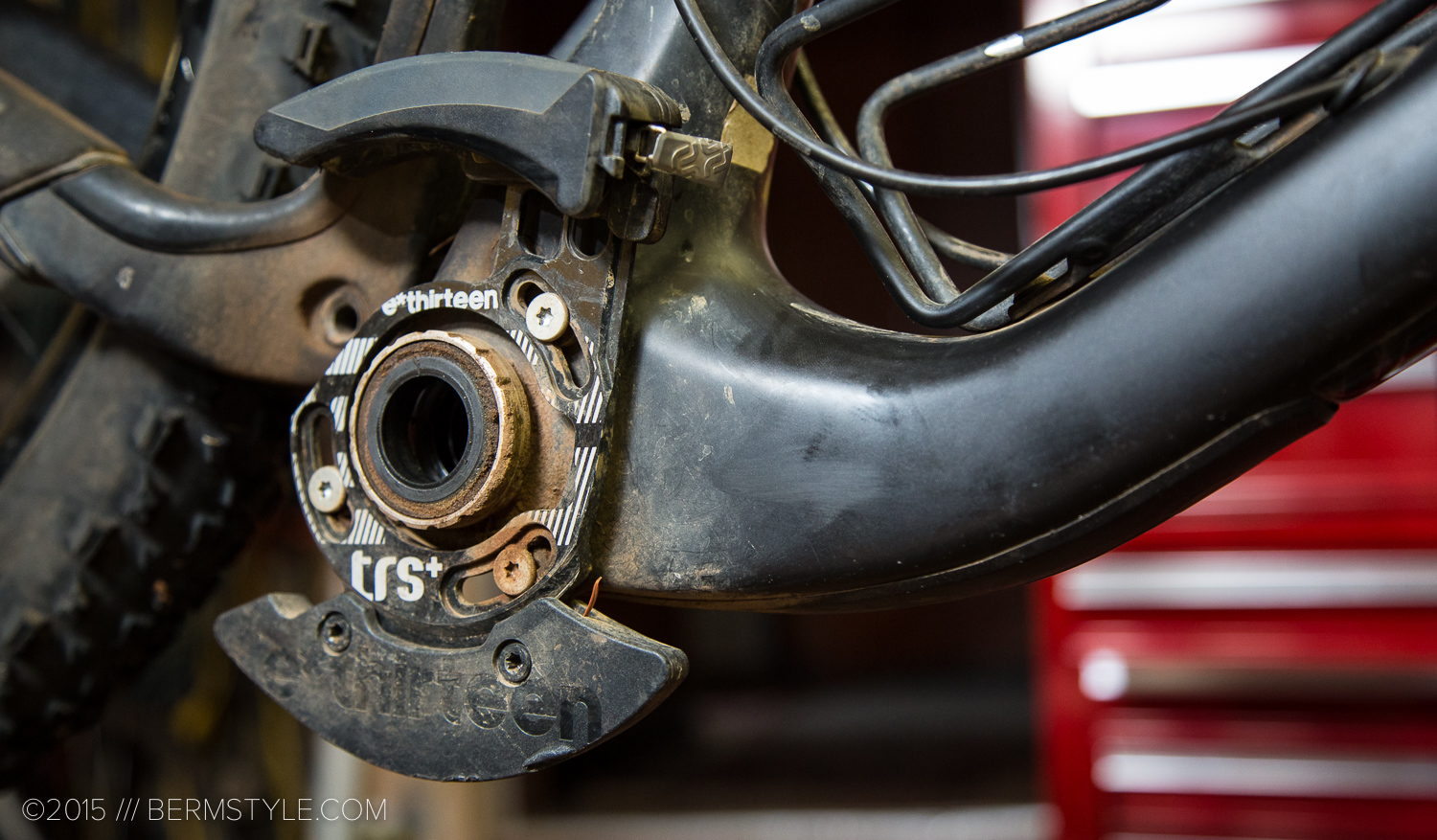 Inspecting the TRS+ during some bike maintenance. Note the impact damage on the bash guard. Better the guard than my chain, ring or frame!

Running the TRS+ in conjunction with an E.13 narrow-wide ring and a clutch rear XT derailleur has performed almost flawlessly to retain my chains, regardless of conditions or riding style.

The E* thirteen TRS+ chainguide runs $109.95. Check it out at BytheHive.com 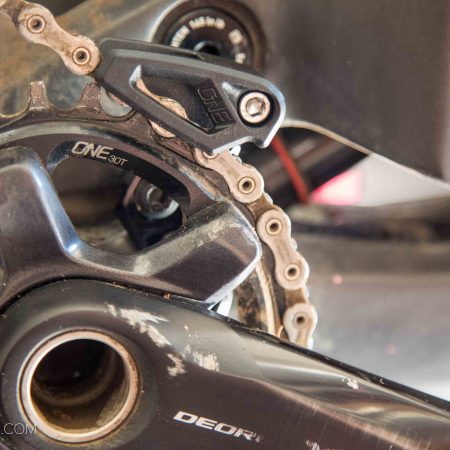 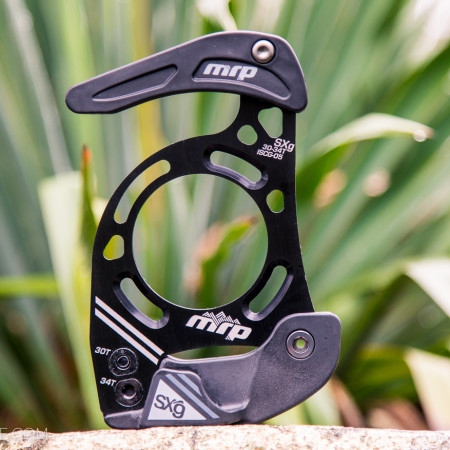 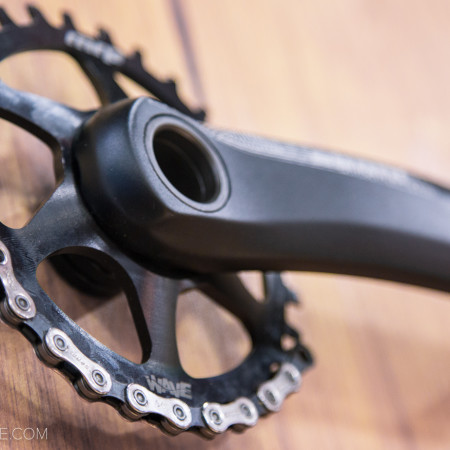 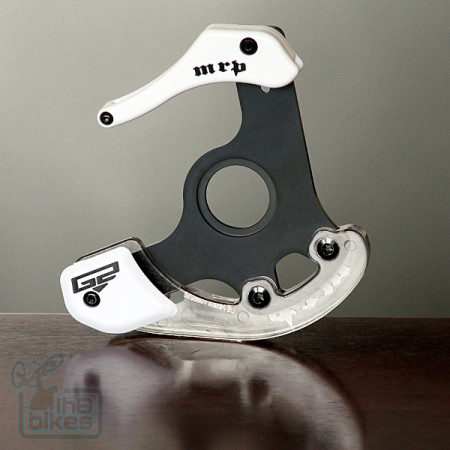