Fans of Black Market bikes were undoubtably stoked when Carter Holland of Black Market showed up at Interbike recently with a new prototype all mountain frame. Taking a few design cues from their first full suspension release, the Killswitch, with a decidedly DH/FR take on the all mountain concept, the new 5.7″ frame will feature a 66º head angle, and a pedaling friendly 72º seat angle. While the hammerlink is still being utilized, the Roam features a single pivot design with a significantly higher pivot point than the Killswitch SS/DJ bike. The BB height for the proto is currently 13″, with 17″ chainstays.

We ran into Carter at Southridge Park in southern California this weekend where he was competing in the 4x race. Currently the only prototype, the first model was made an XS to see if it would work with the existing design. I got to take a quick spin on it, and while it definitely felt small, I was able to get a general idea of what the handling would be for it. Like the other Black Markets, expect the Roam to reflect a BMX approach to riding trails. With a 72º seat angle, it looks more than pedal friendly, and looks to be extremely promising for those that are concerned with handling first and foremost. For my ride, the suspension was definitely set up stiff, but my first thought is that it remind me a bit of a Corsair Konig. It is hard to get a real take on a bike that doesn’t fit right, and didn’t have proper sag set up, but knowing Black Markets, the bike should be wicked fun if your local pedal session includes lots of jumps.

A look at the shock mount from the bottom. For NW riding, a cover will definitely be key.

The head badge makes me think of Guns N’ Roses.

The Roam and a Killswitch

While I’m personally not a fan of front derailleurs, to be considered seriously as a trail bike, the Roam will need to be front derailleur compatible. This model was set up more gravity oriented, with a chain guide, but if you look closely you’ll see provisions for a front derailleur- cable stops. Carter has already discussed several changes for follow up mules- a different top tube, and a different head tube bearing are two changes in the works.

Also of note, at the moment the Roam and Killswitch appear to share the same drop out design- a bonus if you are the kind of rider that likes to stay in the family of bikes. Black Market offers a number of different drop out options, from vertical to single speed friendly rear slotted, and a maxle compatible dropout.

Bonus: first ride on a Killswitch

I also had a chance to finally throw my leg over a Killswitch and pedal one around briefly. It wasn’t enough time to decide I needed to have one, but I was impressed by how good it felt. The bike I rode was Carter’s, and it was set up stiff, as he had raced it at a local BMX track the night before. As he was about to head up and do the MTX, it was still set up stiff, with clip-in pedals. My first impression is that it felt good, and can’t wait to get some extended time on one to see if it lives up to the hype. The big sell of the Killswitch is that it was designed to ride essentially like a dual suspension or soft tail version of their popular Mob hard tail jumper. Having owned both a Mob and a Riot frame, (I currnently run a Riot for my DJ/ pump track shredder and love it) I felt right at home throwing a leg over one. The big question to me personally is this: exactly how versatile is this frame really? $1400 frame only for a jumper is not cheap, and while I think this bike is just the ticket for the extra confidence to roll up to the start hill at the Aptos dirt jumps, or at the Ranchstyle Slopestyle course next year, the suspension would need to be handy enough to be run on some bumpy, jump filled shuttle runs as well in order to justify the cost. Because $1400 for a dirt jump bike is pricey, no matter how you spin it. (a lot of jumpers consider their equipment disposable and replace it regularly as par for the course)

Carter Holland of Black Market Bikes doing a bit of product testing on the mountain cross course at Southridge Park.

I’m hoping to get some extended time on one as soon as I’m healed up, as I am definitely in the market for a bike like this myself. 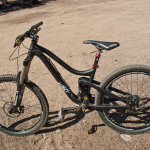