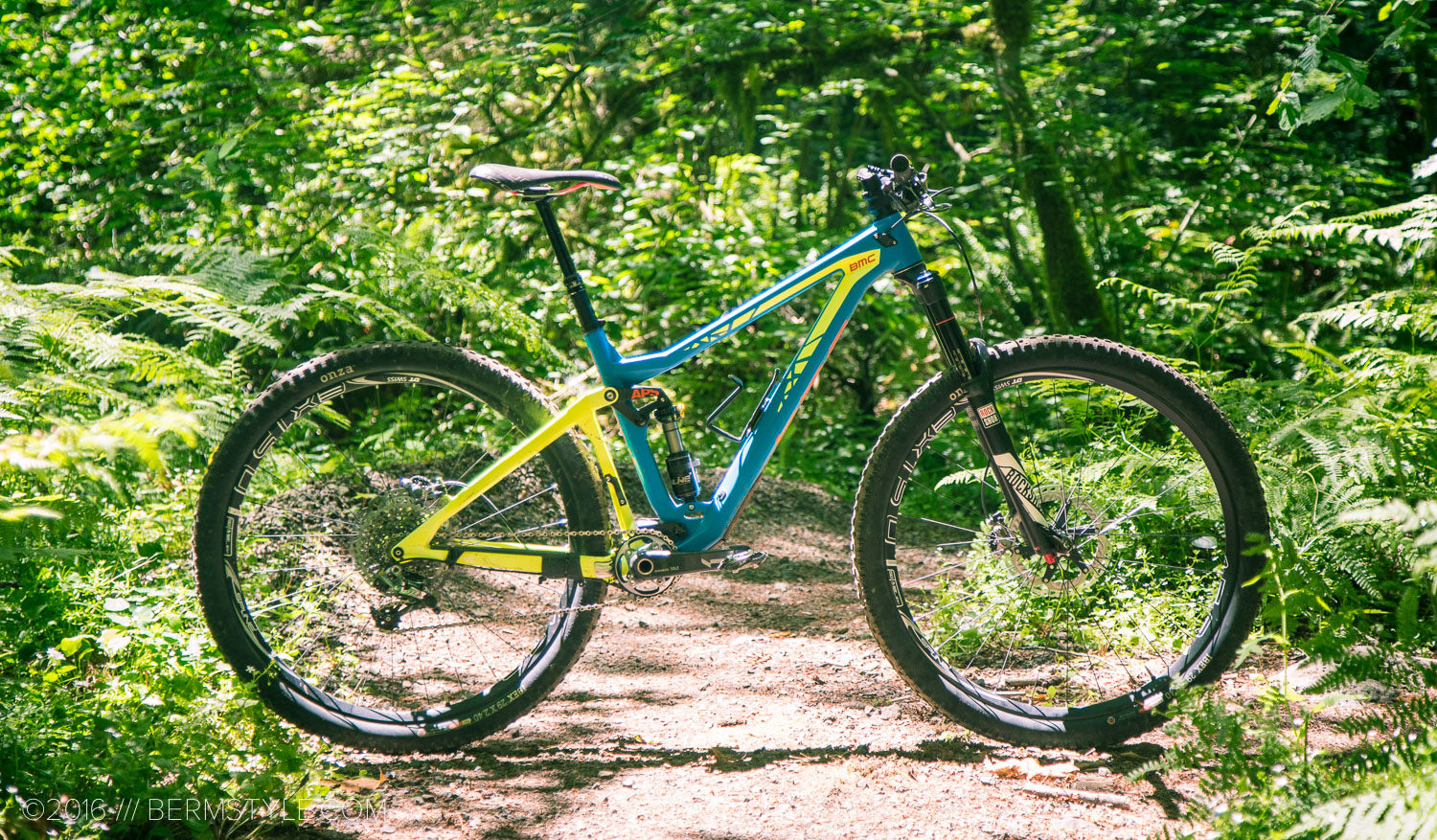 The BMC Trailfox is the enduro-specific model from the Swiss bike brand utilized to contest the Enduro World Series by the BMC Factory Trailcrew. Many of the team members are former downhill racers and after logging saddle time on the BMC Trailfox 01, you can see their influence on the design of this bike. It’s straight up designed to crush burly terrain most of us would prefer to ride on a full blown DH bike. 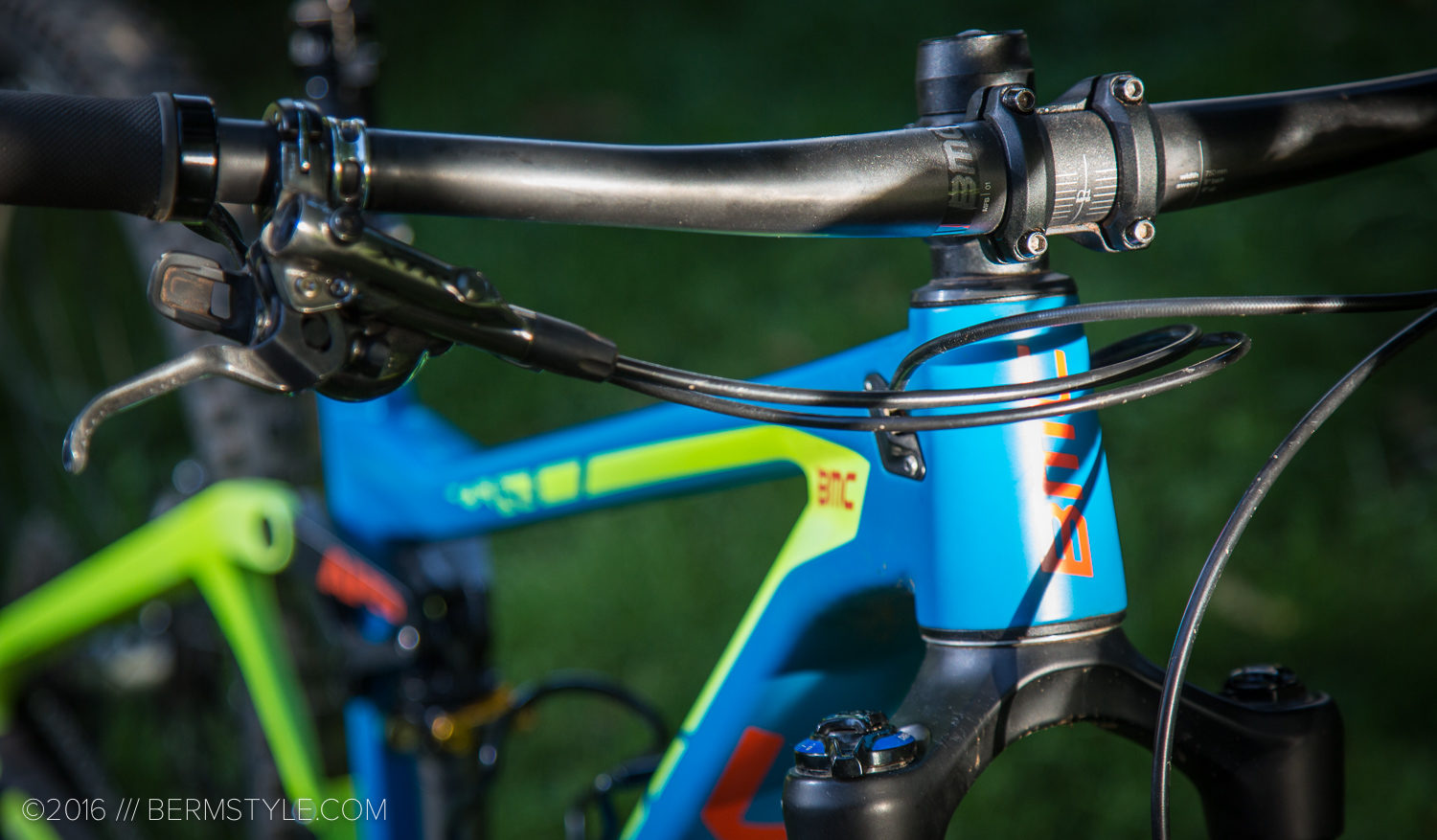 Flat carbon bars put the height of the bars at the right spot.

Many 29ers I’ve logged hours on carried straight line speed well, but the Trailfox charged the downhills while ripping the turns as well. Though I haven’t always been a fan of big wheels, I have a whole new appreciation for them as this bike brings a whole new level of kickass to the table. 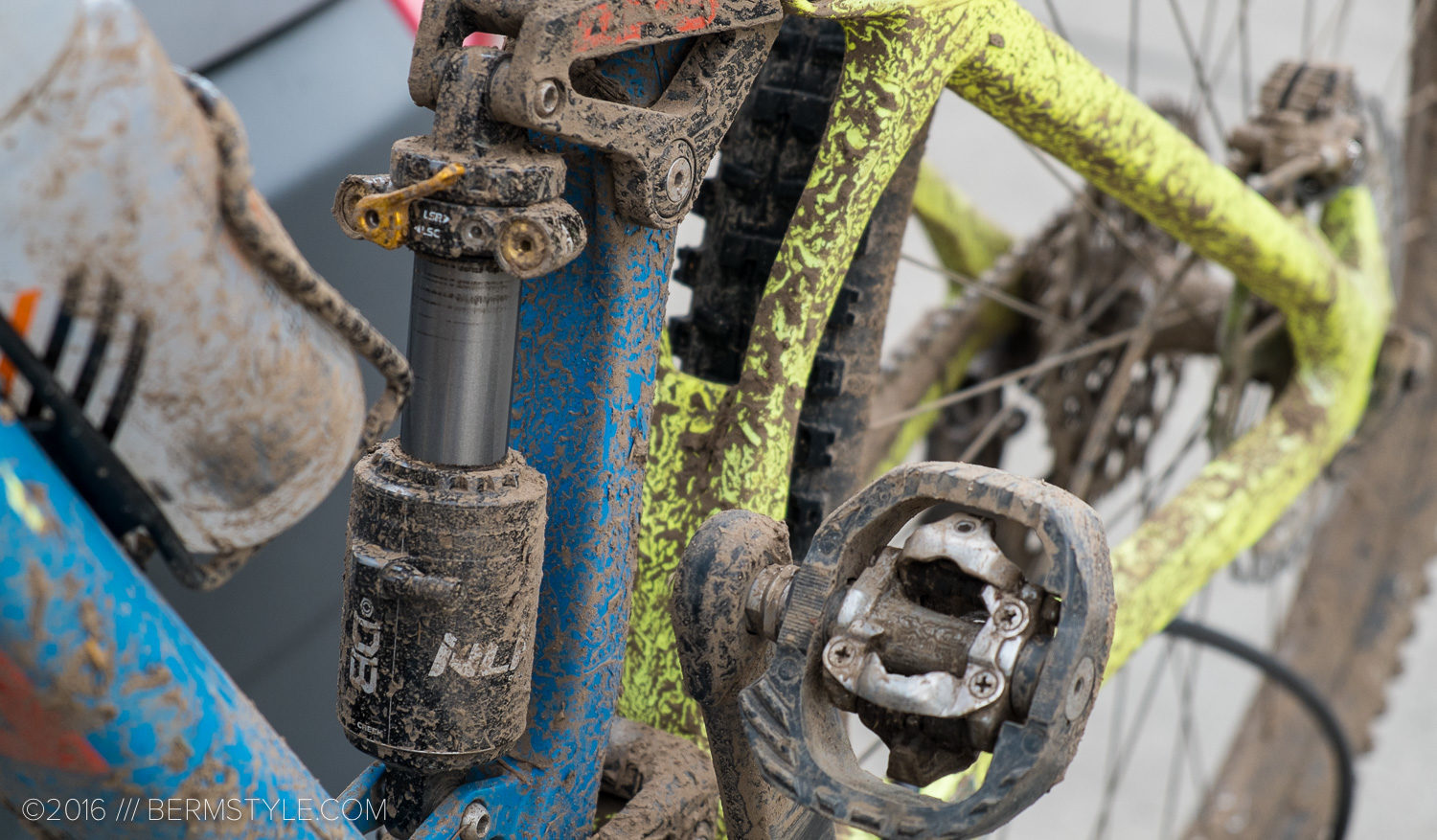 Highlights of the Trailfox frame include the BMC APS suspension design. Short for Advanced Pivot System, the suspension is a unified rear triangle linked to the main frame by short links. The system is not unlike that of other short link designs offered by other manufacturers like Santa Cruz and Intense, DW-Link models from Ibis and Pivot or Giant’s Maestro.

Our loaner/demo model looked like it had a good number of hours on it, so there was a bit of stiction in the Double Barrel shock initially. Other than that an a bit of a creak we were good to go. 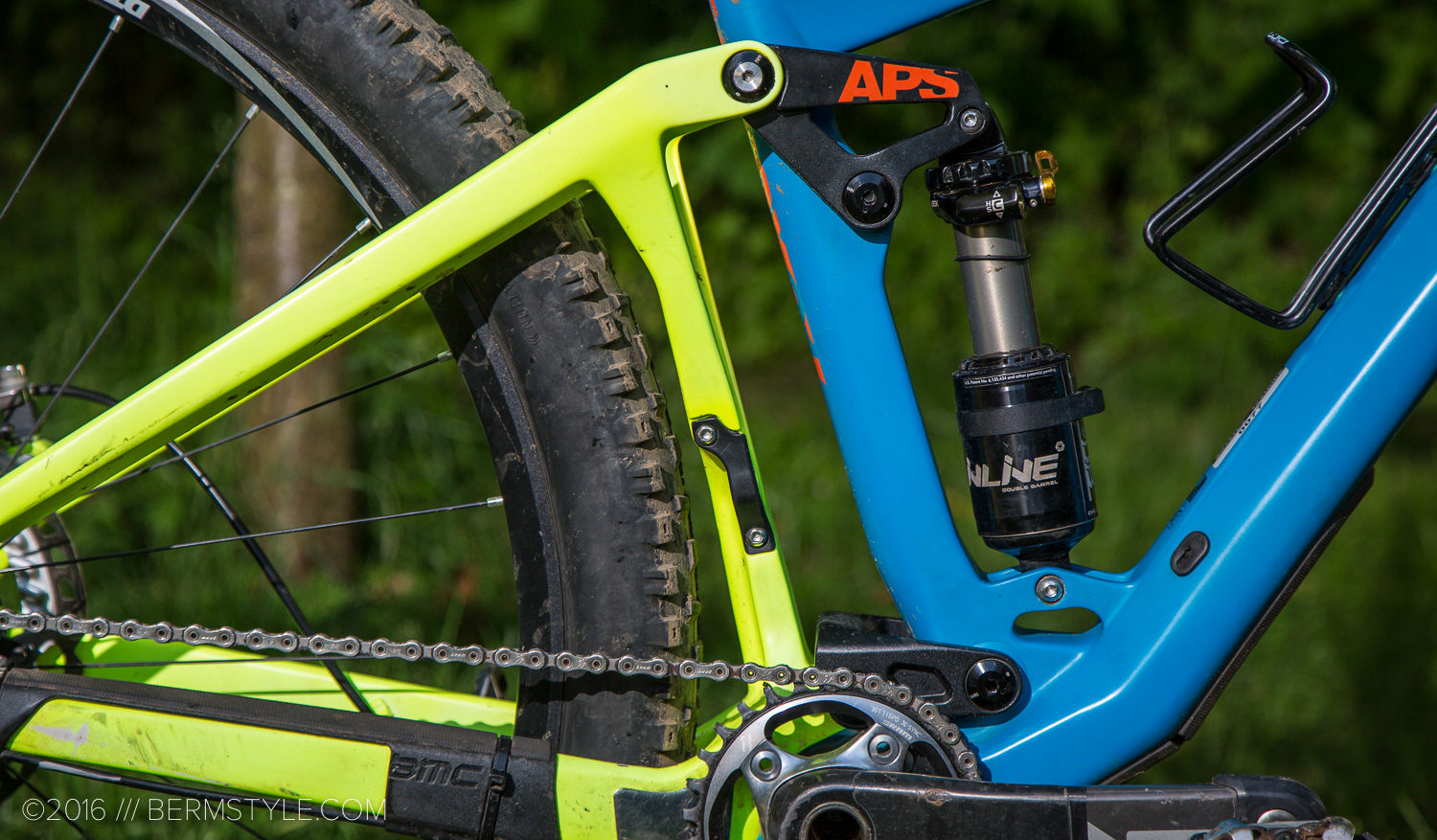 The geometry of the Trailfox was spot on with both of our personal preferences. Based on the numbers, I was expecting a ride not too dissimilar from my Nomad, though with bigger wheels I was expecting a bump in traction in the loose stuff. The cockpit felt super comfortable from the start, with the 50mm stem hitting our favorite sweet spot in reach.

First rides on the street were inline with expectations, though it felt more like the pedal-able DH bike than I thought it would, and I found myself feeling out the high volume Onza tires by plowing up and down curbs seated. This was going to be fun. 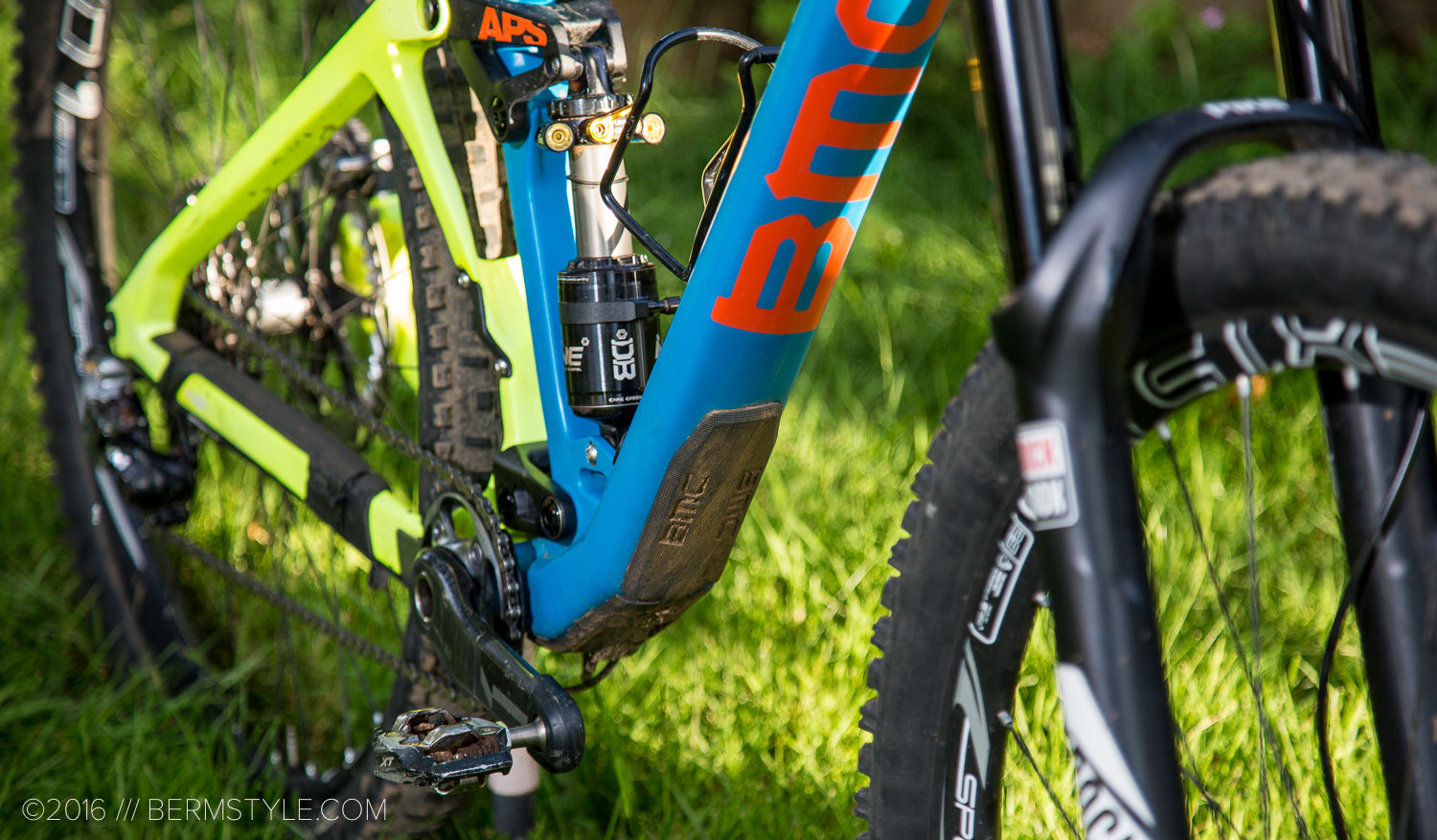 Between the large volume tires, low tire pressure and heaping mounds of suspension travel, trail chatter is dimmed down substantially. The usual banging through rooty rock gardens was replaced with a low brrrrrmp-bummp sound as the tires and suspension completely damped both the trail and sound. As expected, straight line speed was easy to achieve. The bike quickly gets up to mach 10, which made our testers happy for the large rotors the bike is equipped with. 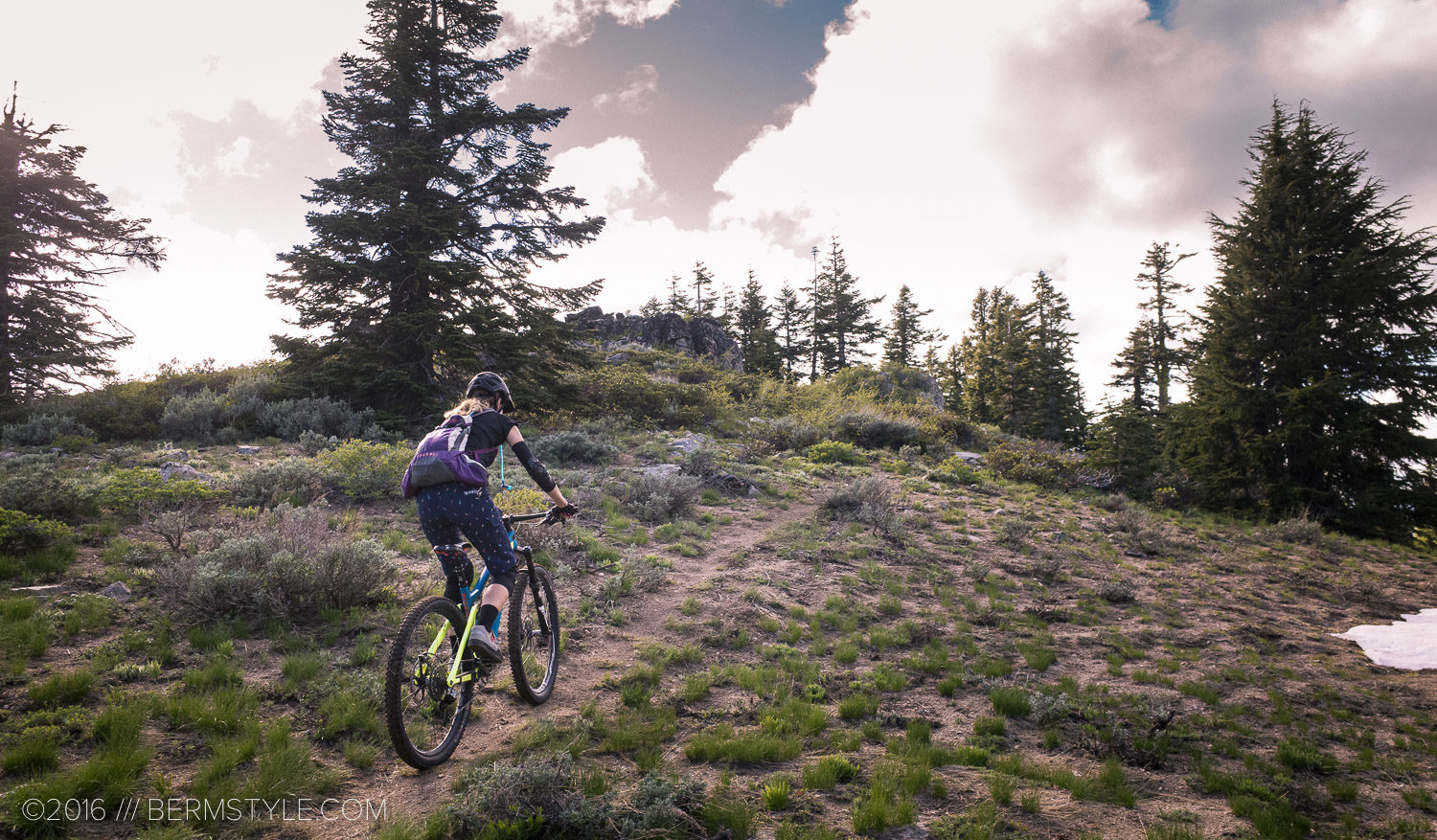 Climbing to the top of Timewarp, in Ashland Oregon

On my first ride I pedaled up the road at Sandy Ridge, heading straight for the trail Rock Drop, which is the closest thing we have to bike park trails here. (outside of full blown bike park) Full speed on the jumps first run through, no problem. I had no problems taking to the air, as the Trail Fox is as stable as hell, and again reminded me of riding a DH bike. Except this ‘DH bike’ can cruise up hills no problem.

That said, that’s certainly relative. The Trailfox is not the bike for slow speed technical trails. Though it climbs decently for a bike in with 6″ of travel and big wheels, it’s definitely a lot of bike for a one bike quiver — unless you’re the kind of rider that is used to pedaling a 40lb. behemoth everywhere. 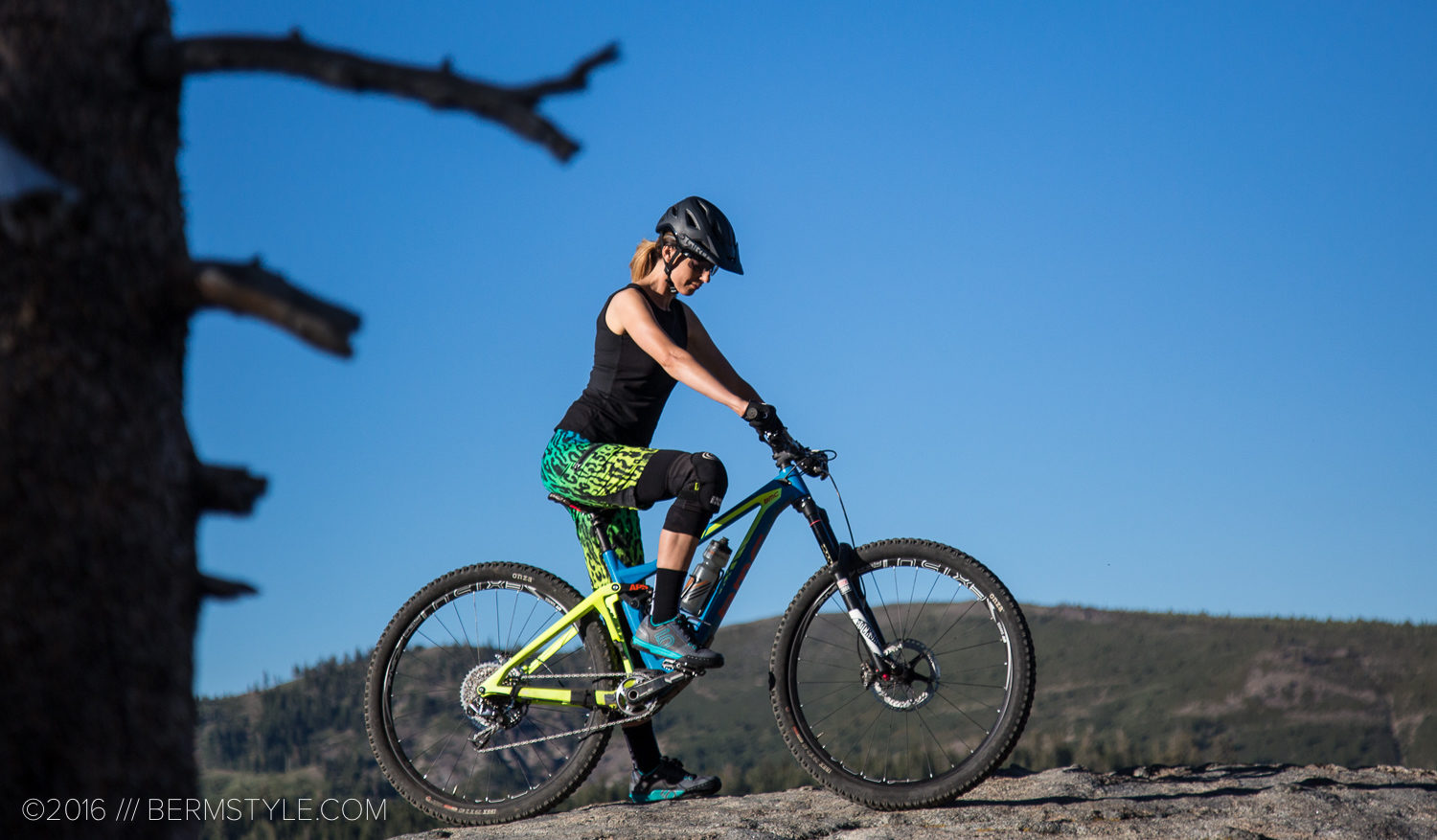 A moment of reflection in Tahoe.

It took Inga a good amount of saddle time to get comfortable on it, but getting it set up properly with the full allotment of sag went a long ways towards dialing her in. It’s definitely not jibby or playful though at trail speeds, (although it could be on the right trail, like say, Crank it Up) this thing is designed to go fast and carry speed down the trail. Cornering the Trailfox best meant taking a nice wide apex and ideal lines regardless of what stood in the way, and plowing through whatever you were pointed at. 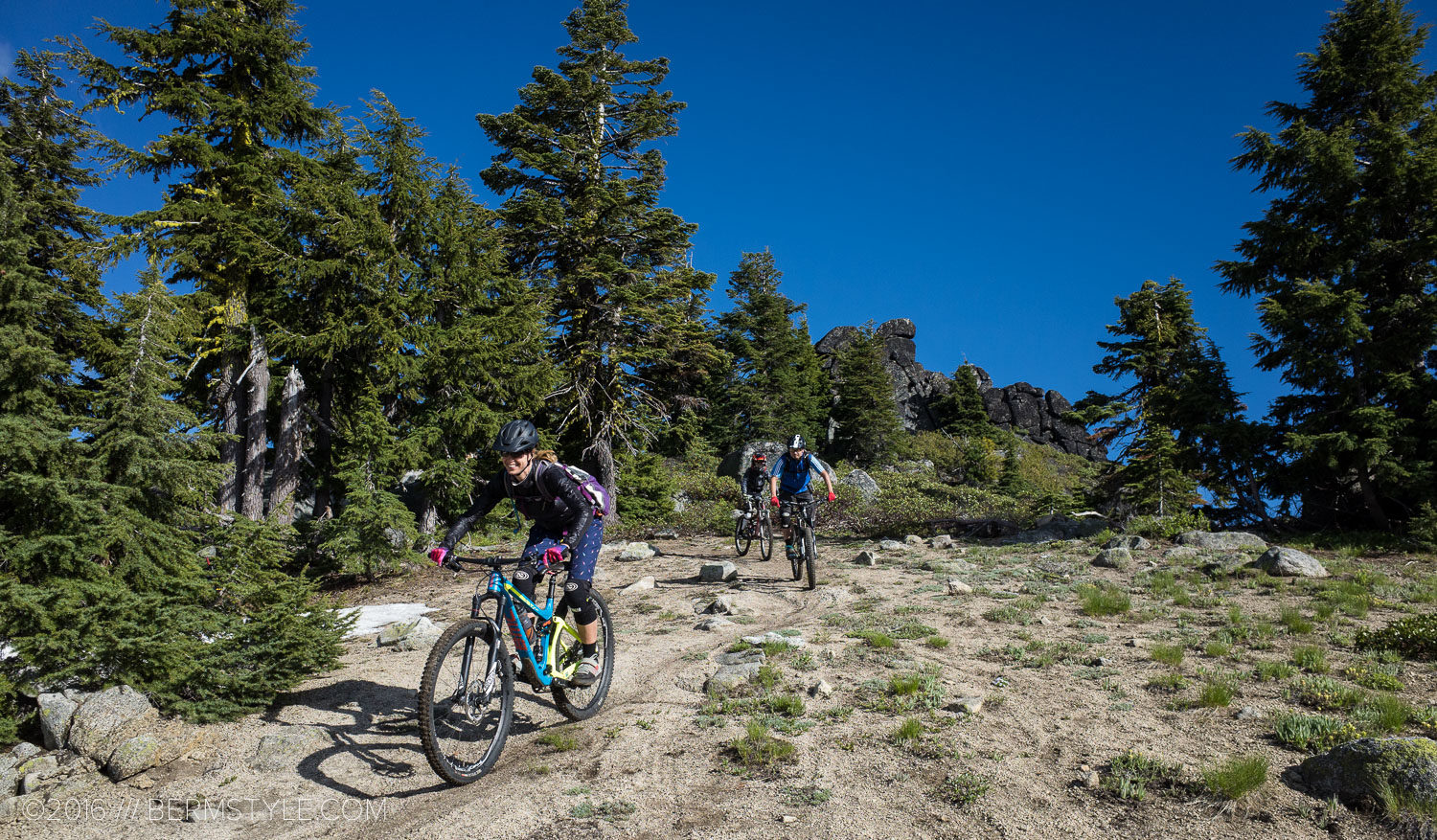 I had a lot of fun on the Trailfox, much of which I attest to the chainstay length. I’ve heard criticism on this bike for how it corners, but compared to a number of other 29ers I’ve ridden I thought it was solid. Much of this can be attributed to the decently short rear center.  The Trailfox features 435mm chain stays, which equal out to 17.12″ inches. Admittedly, they’re not the shortest in the category. The well-received Specialized Enduro 29″ features stays measuring out at 430mm, making it the category leader when it comes to short stays and long travel. (Although we’ve spent a bit of time on the latest iteration of the 650b Enduro, we haven’t made it onto the 29″ version.)

I wouldn’t want to spend all day on this bike riding groomed single track on long miles as it only comes alive when pointed down. When riding this rig, you’re pedaling it up so you can unleash it on descents. 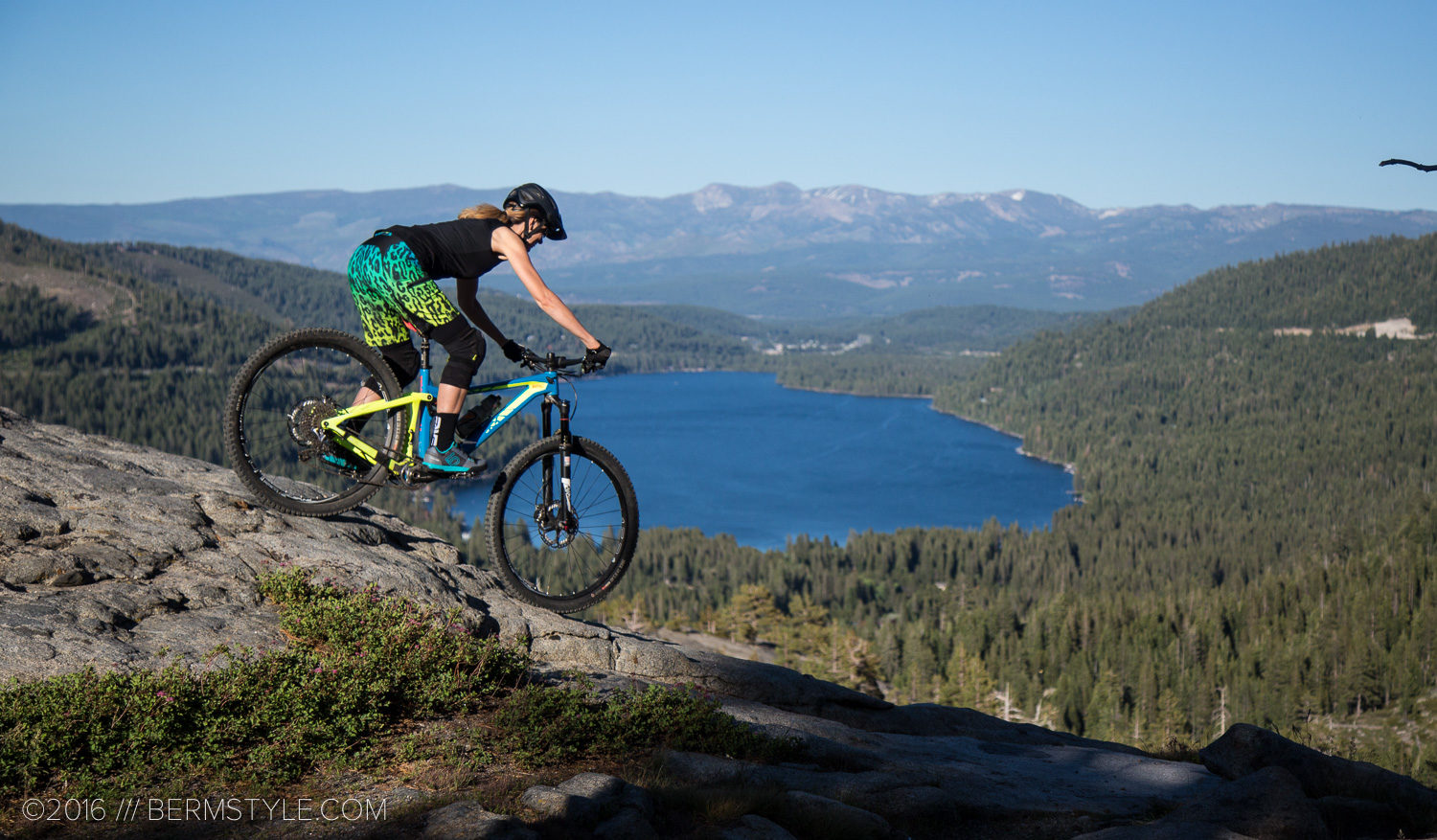 Ride with a view of Donner Lake.

Fortunately, our options for trail riding are significantly more diverse here in the Pacific Northwest compared to our previous stomping grounds in the Bay Area. If you like going fast and smashing down the trail, its obvious that at some point I’ll be adding a 29″ bike to the quiver, as the stability and speed combined with traction in the turns was a ripping combination. Though I’ve complained about big wheels in the past, with the improvements in geometry, these days its less about wheel size and more about the specific riding experience each bike brings to the table. My dream bike has always been a bike that descends like a DH bike and climbs like an XC bike, and its clear to me that a 29″ will be a part of that equation. For flow trails with lippy jumps, rollers and snappy turns, 650b makes sense. (but so does 26″ when you think about it) 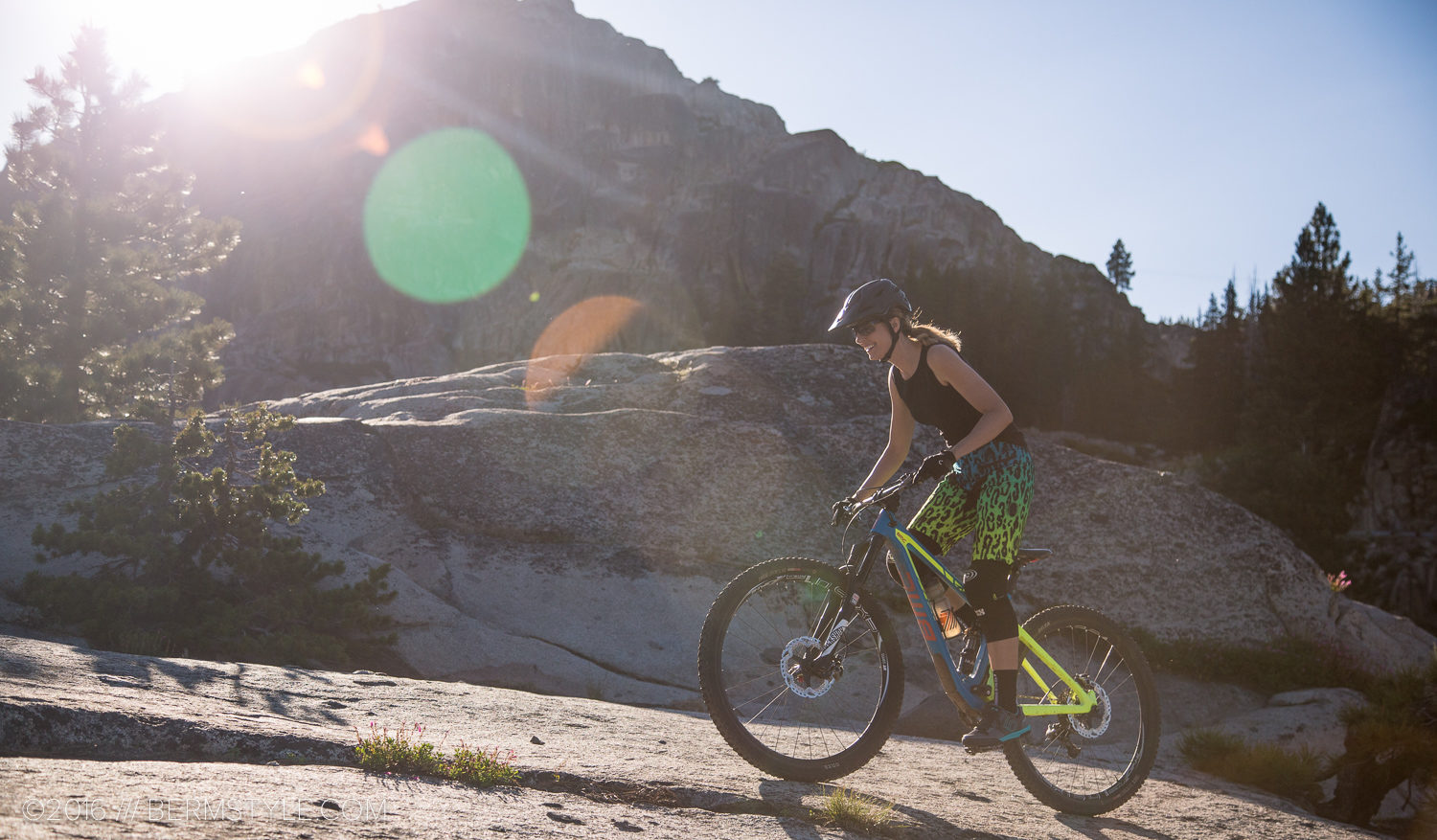 So knowing this, what did we think about the BMC Trailfox? I’ll say this: this beast is straight up enduro-ready. If you’re a former downhiller looking for that holy grail of a trail bike that “descends like a DH bike and climbs like an XC bike”, the BMC isn’t quite there. I’d say its more like a “descends like a DH bike and climbs like an all mountain bike”. Though it felt downright sluggish on pavement climbs, once it hit dirt that feeling disappeared and we climbed just fine. On the downs though, man, that’s where the BMC got interesting. Rock gardens and baby heads? Braaaaaap. I was pedaling the entire time, and couldn’t go fast enough.

Maybe that’s not the best way to communicate how this thing descended though. It was more of a lower toned ‘brrrrrrrrrrrrup’. The large volume 2.4 Onza tires, while slow moving on pavement, allowed low tire pressures that damped trail chatter. Seeing as how the Onza treads are basically High Rollers, nothing to complain about here. 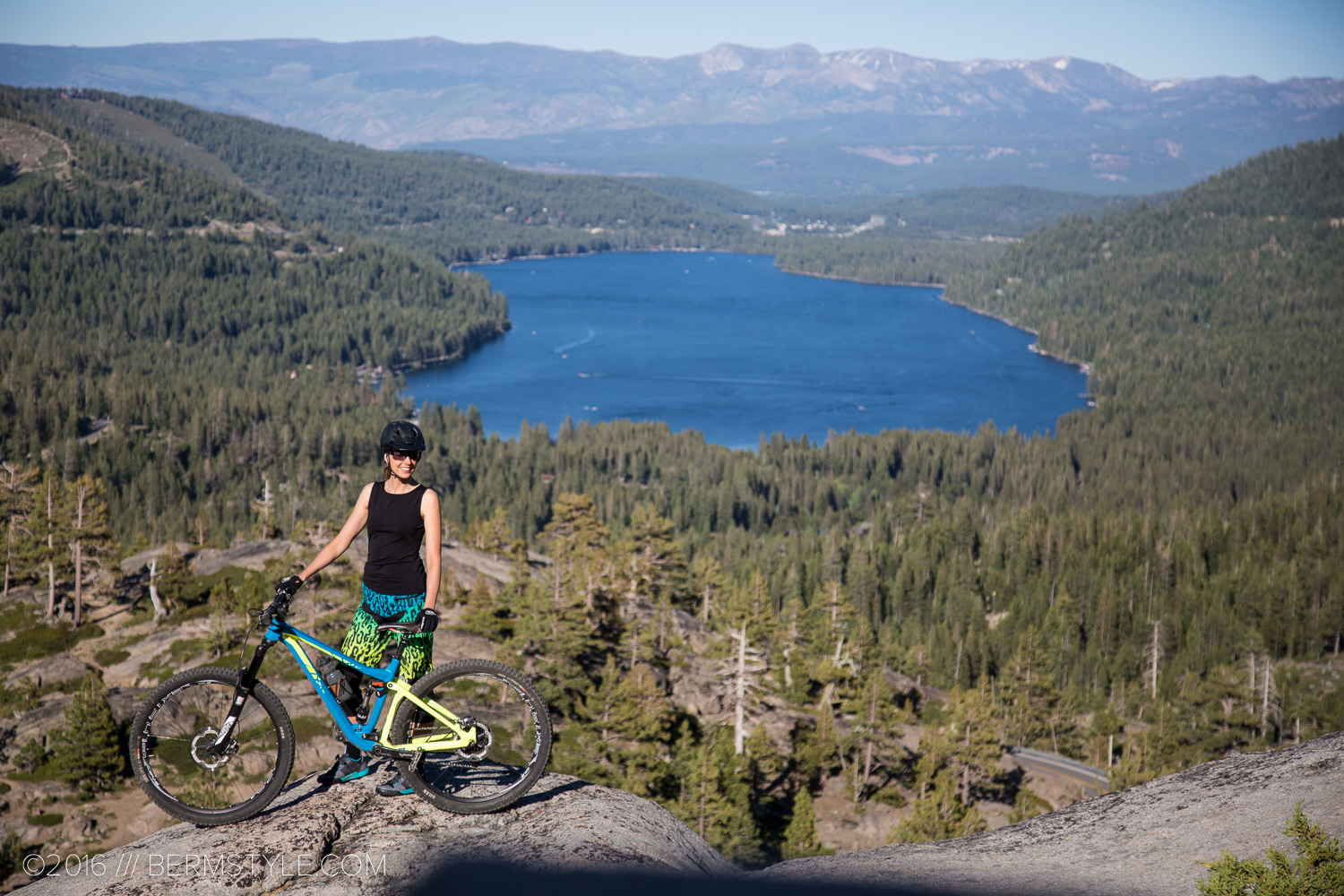 Truckee has some sweet viewpoints.

Back to cornering? Yes, just make sure to go as wide as possible and commit, pointing those hips and dropping that shoulder. This bike needs to be pushed hard to work well, but an aggressive riding style is rewarded. Whips? Sure, but think about hitting bigger DH style jumps before you start unleashing them.

That said, it pedaled like it was what it was. A long travel trail bike with slow rolling tires. If the BMC was in our quiver for the long term, we’d probably consider trying out a slightly faster rolling tire in the rear. 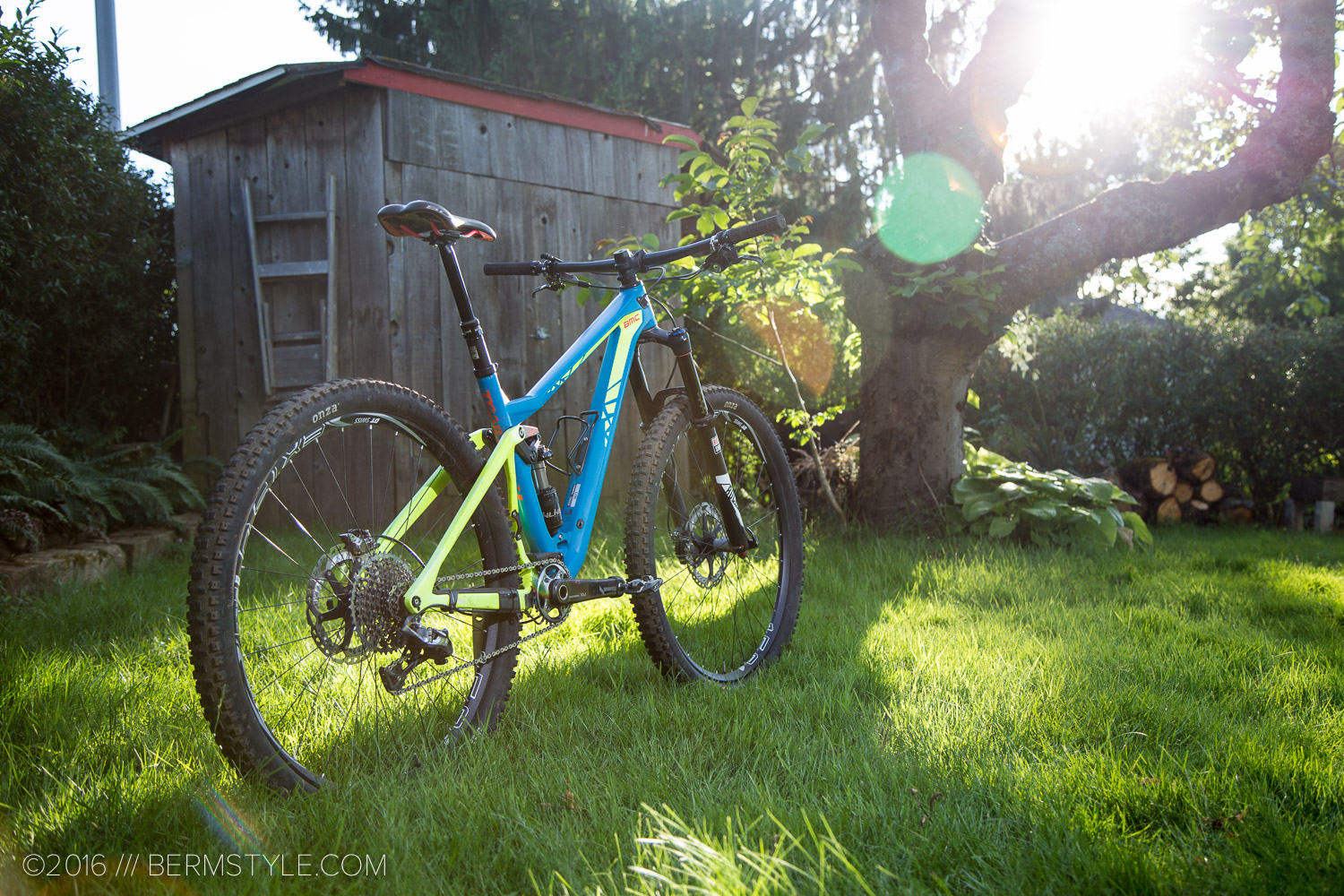 The BMC Trailfox is a bike for hitting it hard.

Let’s talk about the bad with this bike: the aesthetics. While we can all agree to disagree and everyone has its own personal preferences, both our testers were initially appalled by the color palette. We’re not fans of frames that use a completely different color for the rear triangle, and the color palette looks like it was pulled from a 1980’s snowboard video. The frame, fork and wheels appear as if they came from a different bike build. Maybe we’re used to seeing much more put together color schemes and graphics, but when you spend this much on a high end bike, you’re going to want a color you can live with. No wait, scratch that- a color you’re really psyched on. That said, the color palette has started to grow on us, though if it was our bike, we’d pull the decals on the fork so it matched at least a little better. 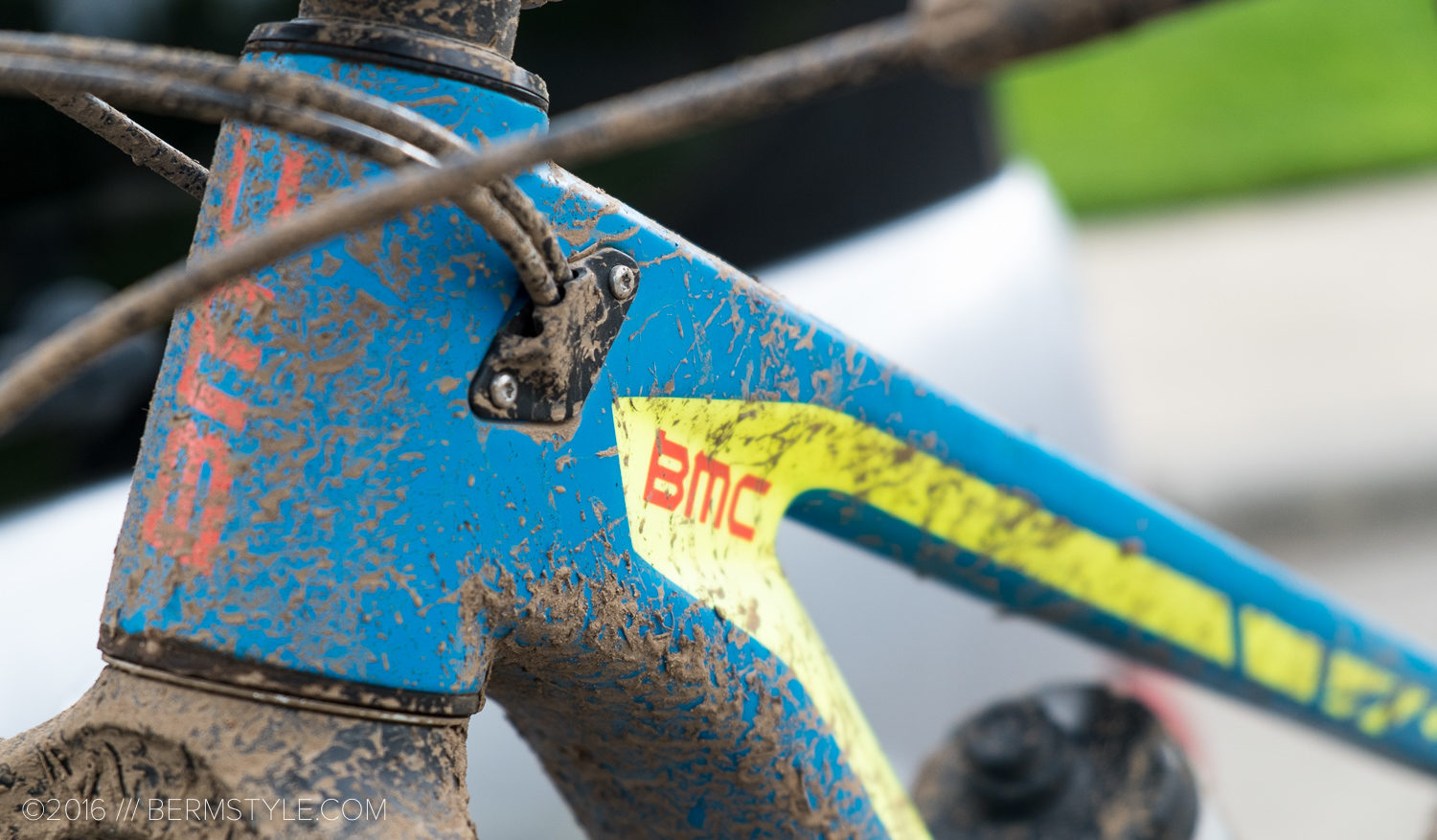 A closer look at the cable port.

Also a bit strange, the 750mm wide bar seems a bit narrow for a 6″ travel enduro rig, especially when combined with the 45mm stem. We also both detested the narrow grips, which were cramp-inducing on descents. They were quickly swapped out to our favorite grips by SDG.

The price of the BMC as well as the singular focus will put this rig out of the reach of most riders. Though it comes with a solid spec, mixing SRAM XX1 with Shimano XTR brakes and DT Swiss wheels, but also includes sticker shock with a price tag listing in the $9k range.

Check out the BMC All Mountain Trailfox at BMC-Switzerland.com