Like a lot of our fellow riders we’ve taken to using Strava to record our rides. First on our smart phones, then biting the bullet and picking up a $150 device that does the exact thing. (but doesn’t run out of batteries mid ride.) We’re both running the Garmin Edge 200, a bar mounted GPS unit that is basically an expensive cycle computer and offers zero functionality in the event you get lost— which is why we still need our smart phones with us, (preferably still charged) The irony is that they only get slightly better reception than our phones.

This post isn’t about the GPS unit though- plenty of folks have written words about them, and the bottom line is that we like being able to track how much we’ve been riding, and see how we rank up with our friends and n0t-friends. The stock mount that comes with these units kind of sucks though, so after we saw a fancy alloy K-Edge mount, we were like, “damn— that’s expensive.” At  $50, there was no way I was getting one for my trail bike, road bike and all mountain bike, so after a quick bit of research we found two alternatives that were much more wallet friendly: the SRAM Quickview Mount, and the Bay Fly Garmin mount by Tate Labs.

Halfway through writing this post, Tate Labs released two new follow ups to the 1.0 mounts; the 2.0 and 3.0 edition, so we scooped up one of each to add them to the mix.

The mounts fit 31.8 bars, and allow you to move your Garmin unit off the bar, clearing up space and cleaning up the look of your cock pit. More importantly, it frees up room for my lights come night riding season. As the computer can now be mounted in a center location in front of your stem, it also makes for increased visibility of the computer. Since we run short 50mm stems on our trail bikes, this was significant.

I’m not sure if my computer is safer on the stem or in front of the bar, but at $20-$30 for each mount, if one breaks in the event of a sudden impact with the ground, I’m still in a better spot. I’d much rather have my $20 mount break off than have to replace a $150 GPS unit anyway. I wish I could say the computer does better in the event of a crash. We’ve both dumped our bikes once riding with the mounts in the forward location, and that shiny new Edge 200 is looking a bit worse for wear. (see photo below) 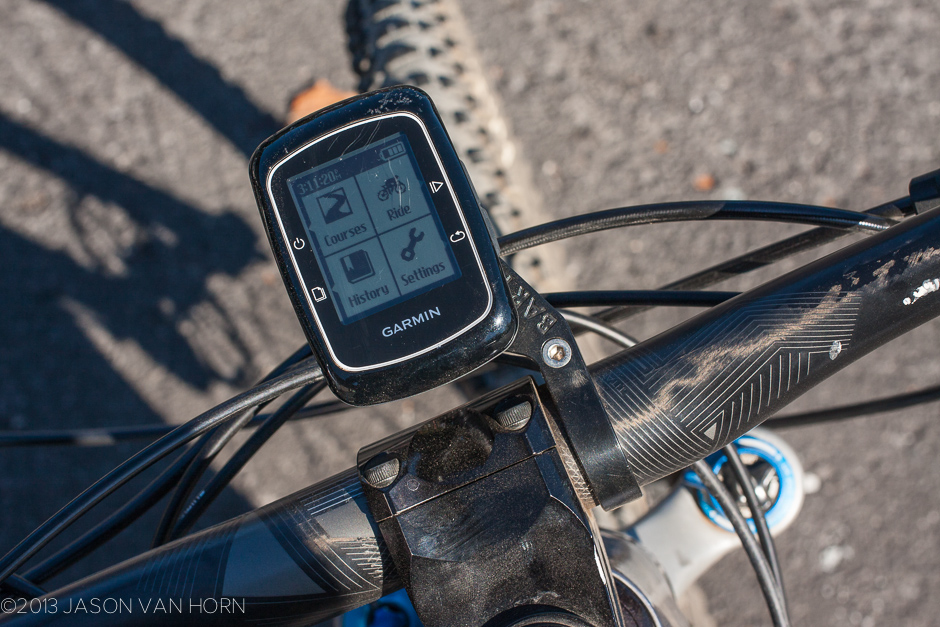 The Bar Fly is compatible with the 200, 500 and 800 model Garmin models and created from delrin plastic. The unit is light and simple, with a single bolt attaching it to the bars. We weren’t aware of it until recently, but it has the added bonus of being a local company. (we always prefer to support the little guy if possible) The mount we went with is actually their first unit; apparently there is now an MTB mount as well, although I’m not sure I’d want to put a computer in that location, as I tend to flip the bike upside down during trail side repairs.

We started with the OG version of the Bar Fly; while it should be carbon safe, it doesn’t have the crash replacement (listed at least) that their other models advertise. It works well, but I gave mine to Inga preferring the rounded organic shape of the SRAM Garmin mount. Everything else on my bike has flowy organic lines, and I’m all for consistency. 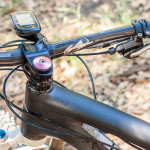 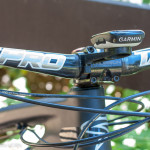 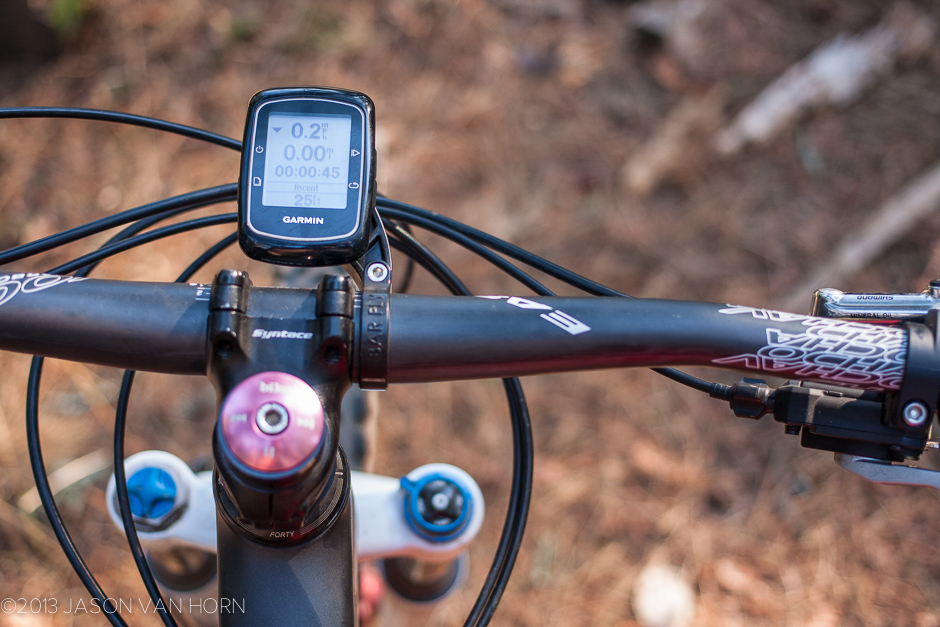 A few weeks into our foray with the aftermarket computer mounts, Tate Labs released a new and improved version of the original Bar Fly. With an MSRP of $25, the mounts are relatively inexpensive, and impulse buy friendly. Since Inga didn’t want to give back the Bar Fly 1.1, I had her buy me the 2.0 version to try out on my all mountain bike. I liked it more than the SRAM model I was running and it quickly was shifted to my the flagship of my quiver, my trail bike.

Like the 1.1 version, it’s made in the US from plastic resin and fits 31.8 bars. It offers two mounting points, but what I like most about the newer and improved model is the lower profile. Initially my thought was that I could do without the second mounting point, as I feel I have to be a bit more careful installing the Garmin to ensure I don’t damage the tabs on the Edge Computer. That said, the Garmin tabs are also plastic, so being careful installing and removing the computer head is prudent. Now I’ve used it for a while, I don’t mind the two points. In fact, I’ve started running it in the rearward position. It’s a bit closer to the bar, feels slightly more secure, and hopefully a bit less prone to impact. (which I don’t plan to test on my TRC any time soon— I prefer my bits of carbon in unscratched pristine condition)

The new mount also addresses my aesthetic gripe about version 1.0, and doesn’t feature the straight lines. It also appears to be stronger, and Tate Labs has a “Buy one you’re done” lifetime warranty and crash replacement guarantee. The newer lower position does bring the computer in a bit more, and it looks to be a better spot to have the computer in the event of a crash or get-off.

Tate Labs was a vendor at the SF Mountain Bike Festival, and had a booth in the expo area with their mounts for sale. Not surprisingly, by the end of the day we saw them on a ton of bikes. The 2.0 mount is available in additional colors, and Inga just had to have a blue one to match her grips and saddle, so I bought one to swap out the 1.0 version on her bike. I’m currently running the 2.0 on my Blur TRc full suspension trail bike, and am a fan. The location of the computer makes for a clean looking cockpit, and I’m able to run two LED lamps for night riding in my ideal mounting locations.

It’s also worth noting Tate Labs is developing a safety light (blinker) that will mount to the bottom of this mount, adding additional functionality to the unit. It is also compatible with electronic shifting modules. 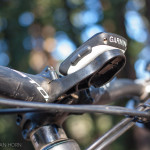 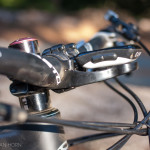 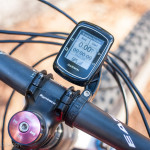 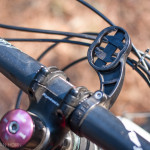 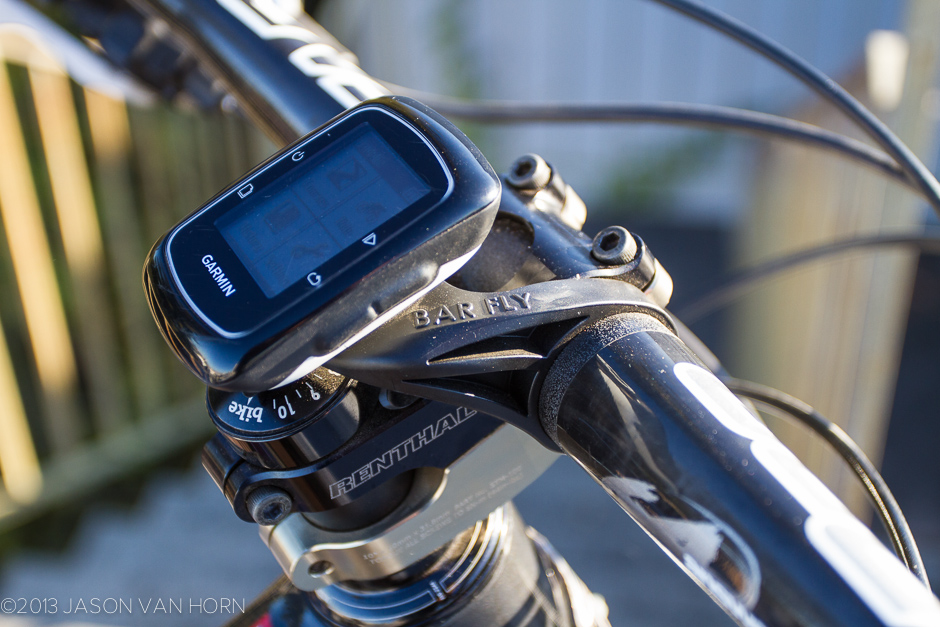 After chatting with the fellas from Tate Labs at the SF MTB Festival, they also sent me home with their newest, the mountain bike specific 3.0 mount to try out. While the other mounts suspend the computer directly in front of your stem and in front of the bars, the 3.0 mount positions your computer above your stem. To be honest, I’m not sure if it’s actually a better position to place the GPS in. It’s well though out though, and the unit is solid like the other offerings. Being shorter and more compact, it’s probably stronger. It also features their lifetime crash replacement. The unit is inexpensive at $25, but I’m a lot more concerned about my over priced GPS/ cycle computer. I’m currently running mine on my Santa Cruz Highball with a short, 50mm stem. If you ever flip your bike upside down, the computer is the first thing that will come in contact with the ground, so if you end up doing a trail side repair, you’ll want to remove the computer, or hang your bike from a tree branch to facilitate repairs.

It’s also worth noting it’s the lightest mount of the bunch. I like being able to look at my fancy shiny stems, and it does cover it up, so there’s your downside to this unit. If you run more than 20mm of spacers on top of a short stem it wouldn’t quite work out either. 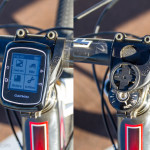 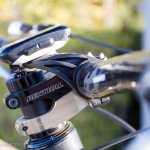 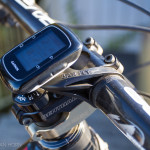 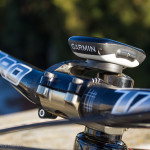 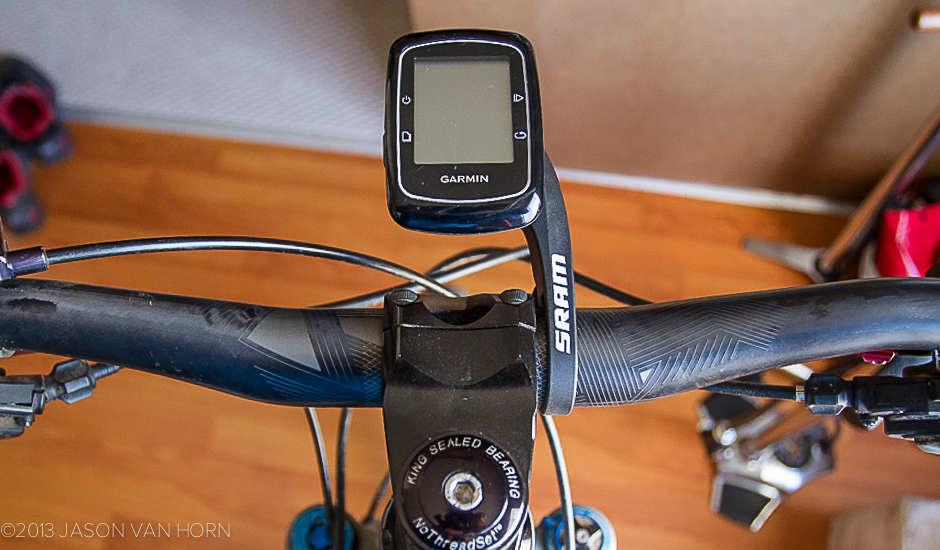 The SRAM mount is a clean looking unit with appealing lines that positions a Garmin in a centered position out in front of your bars and stem. It gets the job done, and like the models from Tate Labs, installation is quick using one bolt. Like a number of other Avid products, it uses a T25 Torx bolt. It positions the computer head at the same height as the original Bay Fly. It initially was my preferred mount of choice, but since Tate Labs improved upon their initial offerings, the SRAM mount has been downgraded to use on my road bike, and currently sees the least amount of use.

I also prefer the more subdued look of the Bar Fly logos as well. However, it isn’t anything a bit of steel wool won’t fix. 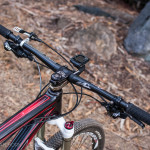 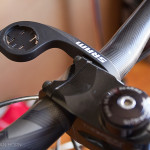 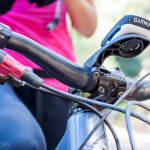 We’d recommend any of the above after market computer mounts as an upgrade from the stock mount that is included with a Garmin computer. While the stock Garmin mounts do an acceptable job holding the computer in place, the rubber bands aren’t really confidence inspiring, and are known to break periodically, especially if you’re changing the mount from bike to bike like we were. (at this point we’ve got a dedicated mount for each bike we’re using computers on)

Unless you’re running a stem with an appropriate length and girth, the stock Garmin mount takes up real estate on the bars. All the after market mounts tested are inexpensive alternatives to the stock mounts and position the computer in a more optimal position; they were all carbon bar friendly as well.

Of the four models tested we prefer the Bar Fly 2.0 and 3.0. as they position the computer in what we felt were the most optimal locations. In the event of a crash, there really isn’t a good spot for the computer to escape unscathed, but we felt they were the best options currently available, and the plastic tabs seemed unlikely to break the wings of the Edge computers. (unlike the more expensive alloy options offered by K-Edge.) 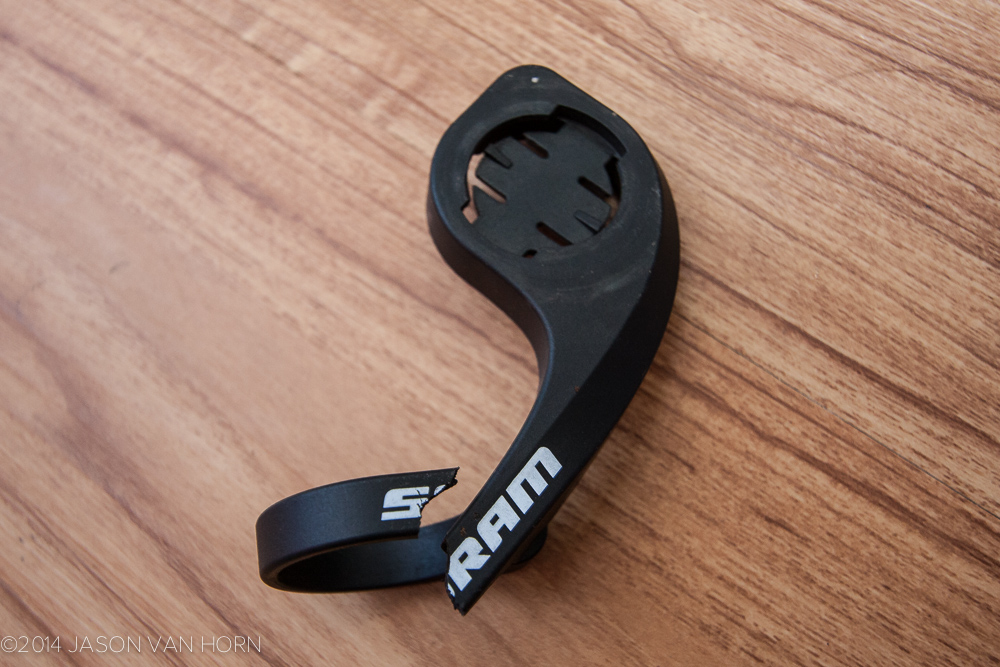 Update: Our SRAM Garmin mount is out, after Inga laid her bike down in a turn at Boggs.

After Inga laid our 29er down in a turn at Boggs a few weeks ago, the SRAM mount is out of commission. Turns out the location in front of the bars isn’t so optimal for mountain biking. No word on whether or not a warranty is offered. As Bar Fly offers a free crash replacement, we’ll be replacing it with another one of those units. (Obviously I should have left it on the road bike) 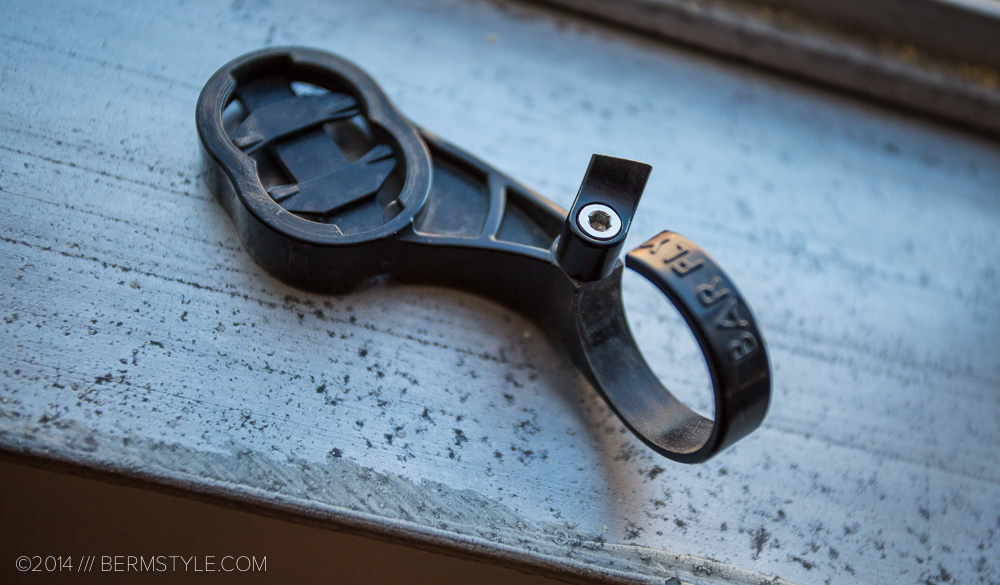 Update: Broken Bar Fly mount. The computer is totally fine, other than some scratches. 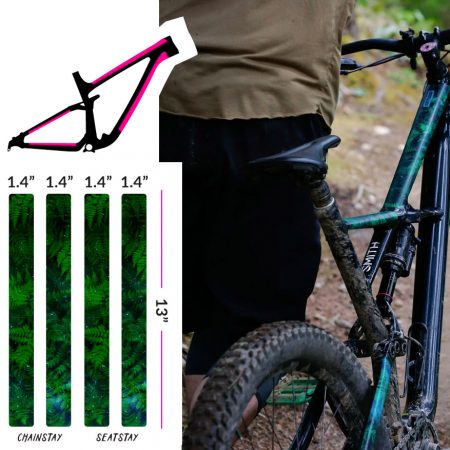 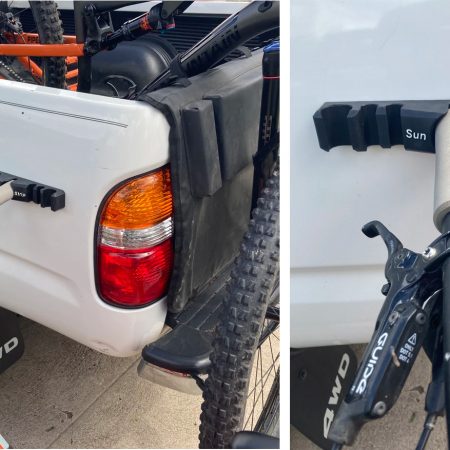 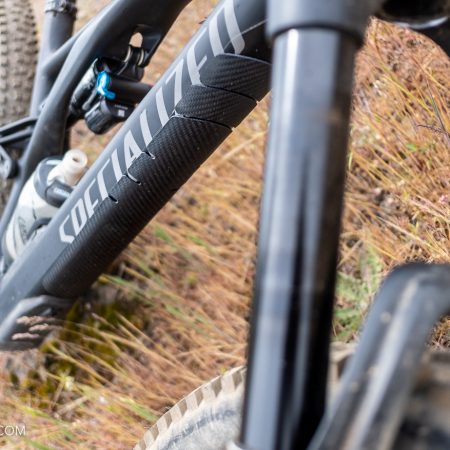 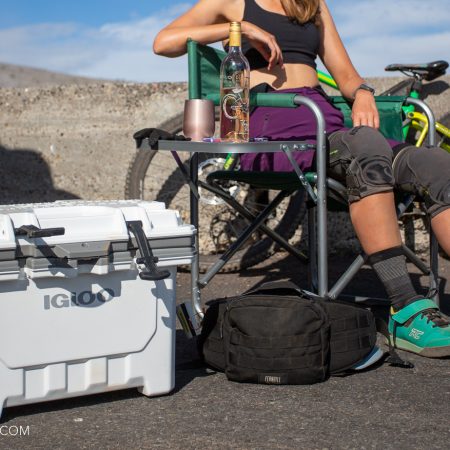