If you own body armor or protective gear you don for your mountain biking exploits, the name 661, AKA Six Six One is undoubtedly known to you, as they have become synonymous with protective gear for bikes- both motorized and non. This southern California company has made a major name for themselves manufacturing good quality protective gear, offered at price points your average rider can afford. While the Italian company Dianese occupy the higher ends (and price points) of the spectrum, brands like 661 and Fox Racing are what you see on the majority of rides at your local bike park.

With the 2010 season looming, most of this gear can be currently found for extremely good prices at the moment. 2010 promises to be the year armor and protection focuses on light weight evolution of the materials. However,  while some of this gear is being discontinued, that doesn’t mean it isn’t good stuff anymore. 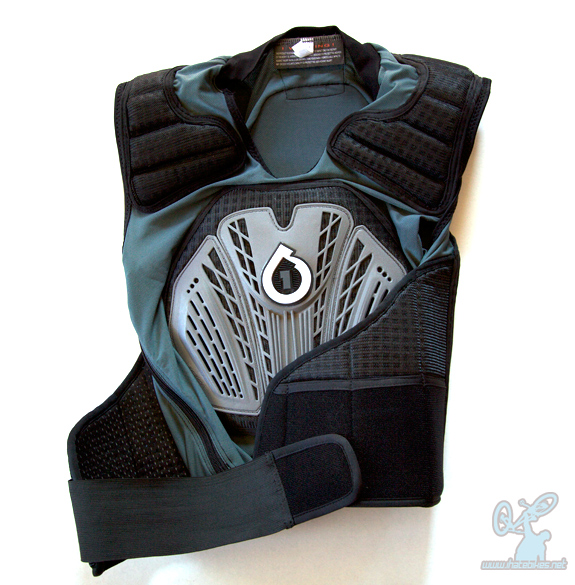 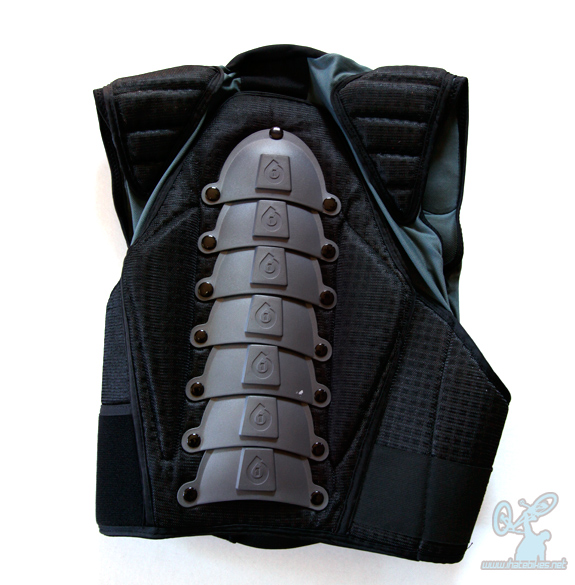 Starting off, let’s take a look at the 2009 Six Six One Core Saver. We all know that wearing body armor is the safe way to go. So why are my friends still ending up in the hospital, when many of the injuries could have been avoided if they had just worn one of these?

The things people complain about most when it comes to actually donning their armor are weight, mobility, and body temperature. If this is you, you might take a look at this product. The Core Saver was aimed at someone that wanted to keep the important parts protected, while maintaining mobility. By ditching the shoulder and forearm/elbow pads, 661 has done just that, while still keeping lower internal organ coverage- not to mention that without sleeves, you won’t get as hot. In addition, unlike the other impact jackets here, it was specifically designed to be compatible with the new popular neck protector,  the Leatt Brace- the top three armor plates snap on and off for use with all neck braces. 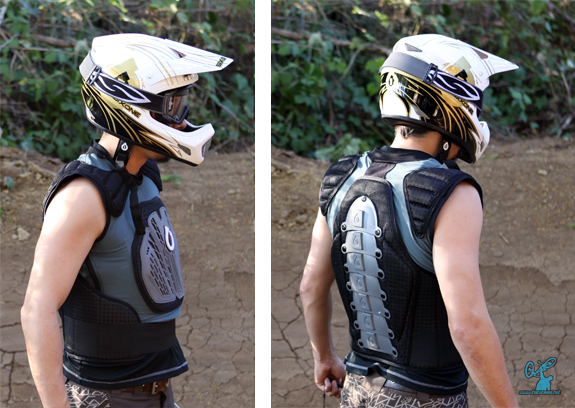 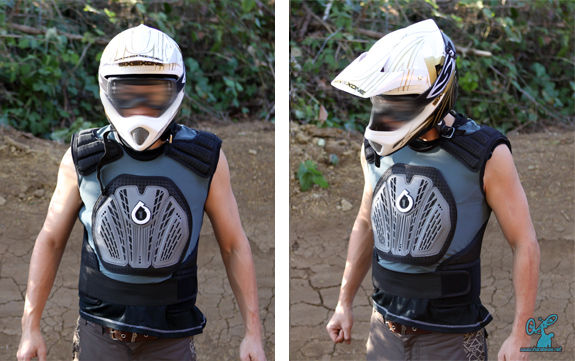 661 Coresaver. Front and 3/4 front view. Pictured with the Evolution Helmet

It’s lightweight and comfortable to wear. In fact,  the only issues I had with it personally were aesthetic. From the back, it looks svelte and low profile. On me however, from the side the chest plate protruded at an strange angle just above the solar plexus.  (see image above) The armor looks better over your jersey than poking through from underneath. As wearing armor as an outer layer is a bit of a faux-pas, this was a deal breaker for me personally- though I liked the idea of being able to hide something under a hoody while dirt jumping. For now, I’m sticking to the full jacket.

Pictured with the Core Saver above is the 661 Evolution helmet in white. I’ll admit, picking up this helmet was an impulse buy. (curses to Chainlove! It was too good of a deal to pass up!)  A step down from their flagship MTB model in Carbon, it shares the same shape and look. The Evolution series is a nice helmet though, and I was happy to have another. (my last one was retired after one too many kisses with the ground) It’s light for a fiberglass helmet, decently ventilated, with a great aesthetic.

Choosing a helmet generally comes down to a few things- fit and the look of it. Making sure the helmet you choose fits the amount of protection you require should be a given as well. This model meets STM, AnSI, CPSC, and CE Bicycle helmet standards, so it’s fine for your DH and Freeriding, but for really high speed courses, you might consider looking at a lightweight DOT model.

Like many DOT helmets, it features D-Ring style straps, which in my opinion are the way to go. They’re a bit trickier to get fastened with gloves on, but you can’t break them in normal use. It features a crash replacement policy, but like a lot of this gear, the prices on these are so good right now you could just pick up two.

It appears that for 2010, 661 has updated this helmet with new graphics, so like the rest of this gear, deals can be had on any remaining stock. Currently the best deals on the Evolution are on Chainlove.com. Also see HuckNRoll, and BackCountryOutlet.com.

The 2009 661 Pressure Suit is a step down from their top jacket, the Pressure Suit Pro. There isn’t much lost for the price. While the plastic impact shields lack the additional venting the top jacket has, the vents do help. The bottom line though, is that you’re wearing an armored jacket- you’re going to pull the thing off after a session drenched with sweat anyway. 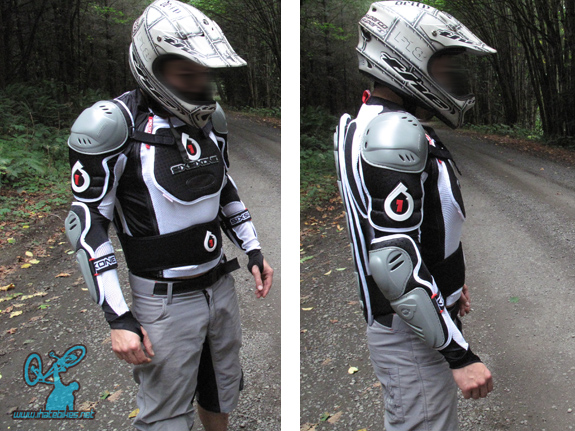 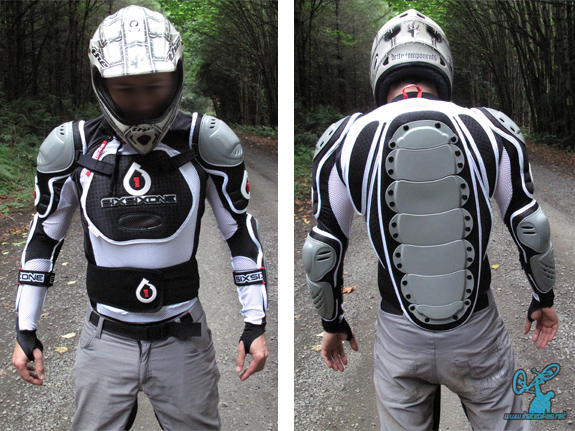 The Pressure Suit is designed to help take the impacts associated with downhill racing and aggressive freeriding. Not only does the Pressure Suit provide excellent protection it is versatile and comfortable with a removable breast plate and a new wider articulated spine armor pad. It basically is a low cost version of the Dainese Gladiator Jacket, and bang for the buck, it can’t be beat. Props goes to 661 for evolving these jackets over the years. My brother has a version of this jacket that is a few seasons old, and the fit on the current model is so much better than the older one, they can’t even be compared. A few key features off the 661 site:

This jacket fits pretty well, and I’ve been putting a lot of time in with mine on our local DH trails- on wet & slippery days where I’ve clipped the occasional tree, it’s been a life saver. The only thing I’m not crazy about is the weight of the spine protector. It not only feels a bit big and bulky, but it adds a considerable amount of weight to the jacket. I actually like the spine armor from their entry level jacket that I sampled better. It is removable, but for me the whole point of wearing all of it is to have the spine protection. The one thing I did remove was hard plastic chest plate- it seemed overkill in addition to the padded piece. Maybe if I was wearing it on a dirt bike I’d keep it in. 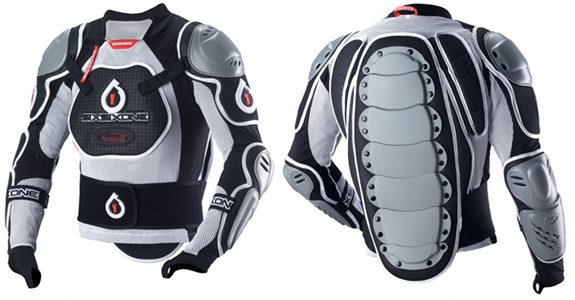 Overall, its not as nice as the Dainese models, but for a fraction of the price, it offers a lot of value. For the price I paid (around $80 or so plus shipping) it’s pretty badass, and I recommend it.

Currently can be found for $89 at JensonUSA. 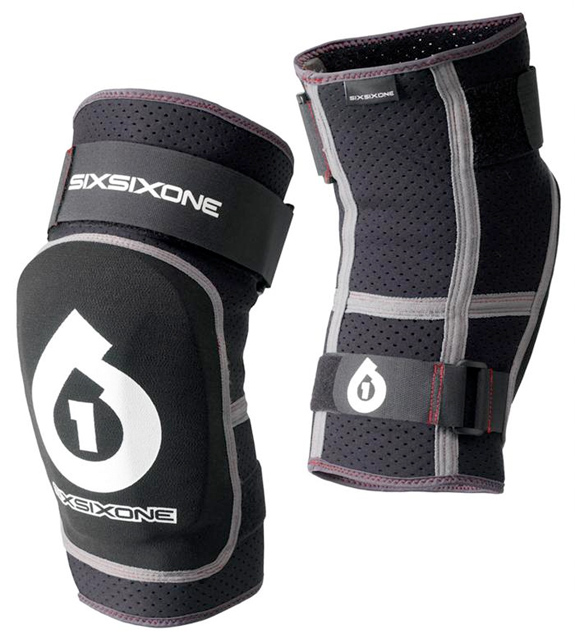 The Tomcat is a really comfortable knee pad with a good amount of protection. Made of vented airprene, I never had major issues with slippage due to the pull-on design. It moved a little bit, but stayed put for the most part. Like the Kyle Strait model, the main issues with this knee pad are durability. One good crash and your new pads are hosed. I actually sewed these pads back together a few times to keep them going. The knee cup is considerably larger than the Strait pads, but because of the larger size, not only feels like it offers more protection, but it took the hits better as well. With the shift to knee pads using EVO protection, these pads can be found at for extremely good deals at the moment.

Like the Strait, the Tomcat has obnoxiously bright logo placement. I’ve seen riders that avoid the billboard look mark over the logo with a sharpie. Fortunately, many of the current DH/FR shorts cover most of it up. 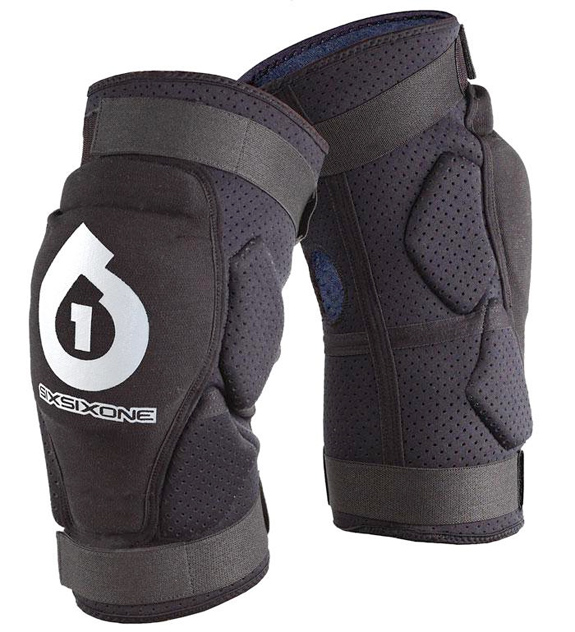 These were my favorite pads for quite a while. Lighter and lower profile than the Tomcat, they don’t offer quite as much protection, but are less noticeable. Designed to be worn under pants, the low profile that doesn’t get in the way while pedaling, and they were my favorite knee pads for all mountain rides for some time. The side padding for the insides of your knees was a big feature for me, and why they became my go-to pads for a few seasons. There are two major drawbacks to this pad: the inside of the knee was made of a rather abrasive material that ended rubbing the skin there raw. Since my favorite trick, suicide no-handers involve pinching the seat, I started having issues with it. It got so bad I started wearing knee warmers on the insides of these pads. It isn’t an issue anymore, as the second drawback of this design put these pads into retirement. The vented neoprene isn’t very durable, and after ripping these pads apart and sewing them back together a few times, they completely blew up. This is also an issue I had with the Tomcat model.

Like the Tomcat, the Strait has obnoxiously bright logo placement. The low profile keeps much of it out of the way, and there is always that sharpie. The low profile is good pairing with lower length DH/ AM knickers. You can always wear them under your jeans as well.

The Bomber short is the basic short from 661 featuring impact protection. Close-cell EVA foam is sewn into the shorts in the hip and thigh areas to ward off damage from impacts. I found these shorts similar to heavy boxxers (that breath considerably better) and they are a welcome addition to my DH/ Freeride wardrobe. They’re light and low profile enough that I wear them for dirt jumping as well- and I don’t like to look like I wear pads when I dirt jump. Devoid of any quality chamois to speak of, the “padded crotch pad” offers minimal amounts of comfort- avoid wearing these shorts on rides were you plan to do a lot of sit down pedaling. The basic Bomber model is carried over in the line for 2010 without any changes. 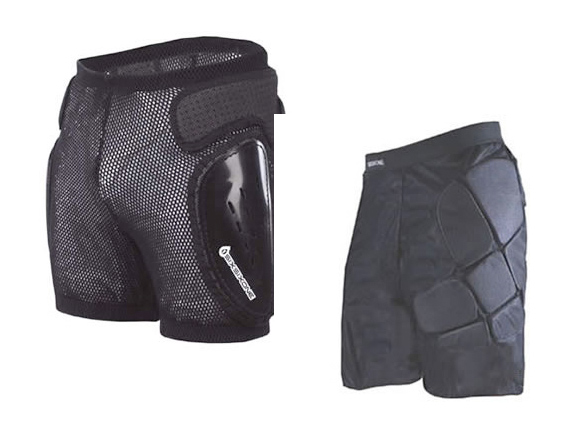 The Pro Bomber short offers considerably more protection than the basic Bomber model. Vented ABS molded impact plastic protects against impacts on the thigh and tail bone, with padding on the hip area as well. The short is constructed of an open mesh for breathability. However, while it offers more protection than the less expensive Bomber Short, I prefer the more basic lighter weight model. Like the Bomber, this is definitely not an all mountain short, as the chamois is practically non existent- I would save these for the DH shuttle or park days.

The Pro Bomber doesn’t appear to be continued into the 2010 model year, with the Elite to be offered in it’s place.

That’s it for the gear round up- these guys are putting out some really nice looking stuff that looks considerably lighter. While I blew up a lot of this gear and was more than a bit bummed about the durability, the bottom line is that I avoided major injuries this season, in no small part because I was wearing the gear. If you look at protective gear as a disposable item, being able to score this stuff at killer prices is a no-brainer.