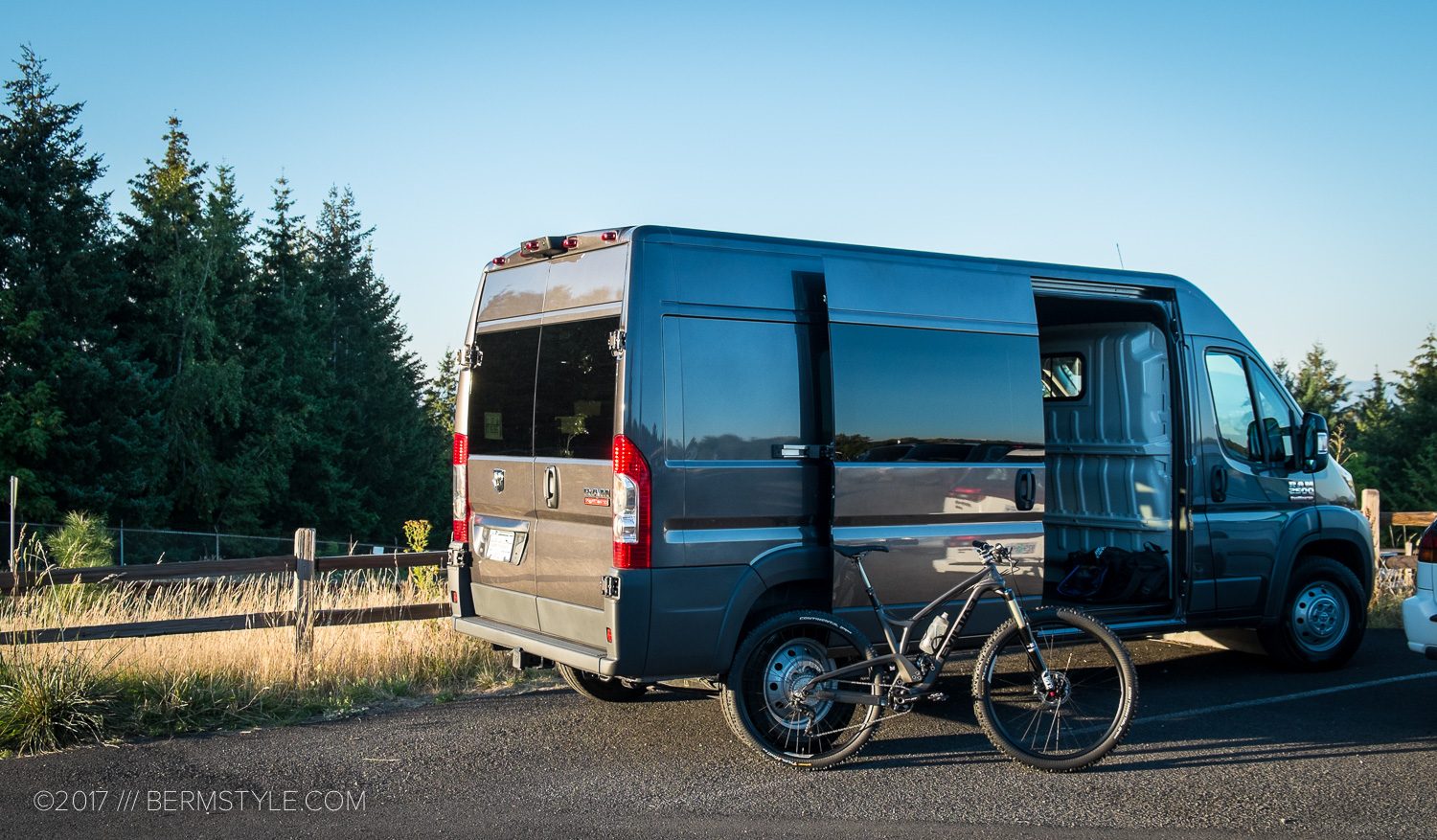 First day out with the new Dodge Promaster Van.

After relocating to a new space with an actual garage and workspace of my own, it was time to begin the build out we’d be rolling in for the foreseeable future. First though, the online research continued. During this time, an observation was made. There are a lot of different types that make up the van community, with builds and layouts varying based on primary activities, but relationship status also pops up as a design factor. We’ve observed three distinctive styles of van life to date:

Many of the builds observed are essentially tiny homes on wheels. As much as the concept appeals to us, we can’t seem to break away from a 9-5 lifestyle, and where would we put all the treasured gear we’ve accumulated? Instead, the goal with our build is the role of the mobile adventure base, which I’ve come to realize means I have a bit more design flexibility and we don’t need as many creature comforts … right away at least. 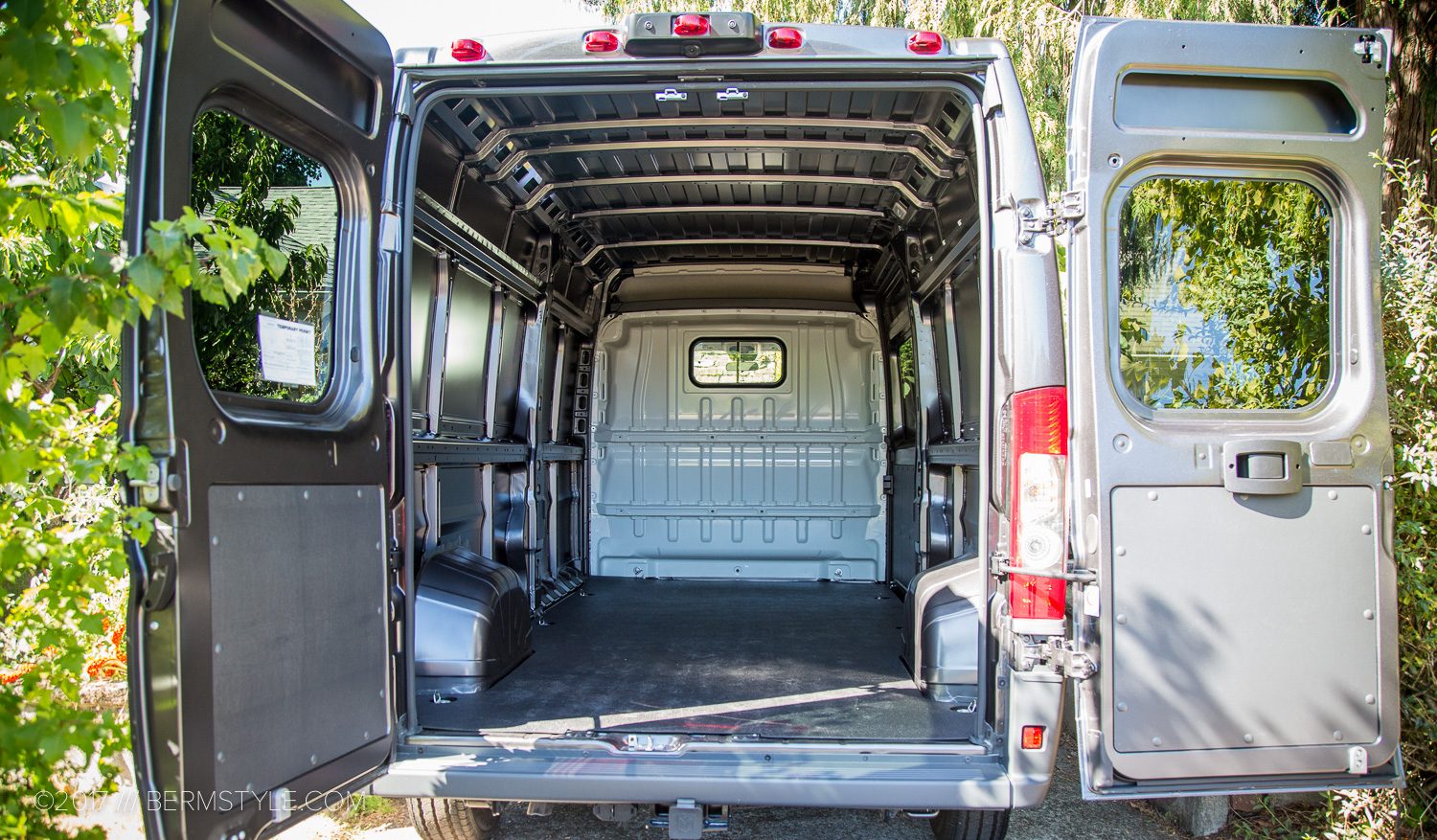 Our Promaster came with a partition which I removed and sold on Craig’s List.

The research continued… once you dive into the rabbit hole of researching do-it-yourself vanlife, prepare to lose hours of your life researching other DIY van conversions. There are a lot of builds posted online, with layouts varying substantially based on lifestyle and primary activities of the owners. As mountain bikers, we were primarily interested in builds utilizing an elevated bed platform as the heart of the design. Elevating the bed allows storing bikes and gear inside the van and adds a significant level of security and discreteness on the road.

I’d never consider locking our trail bikes outside of our home overnight, so why would I be willing to take that chance every weekend in random locations? 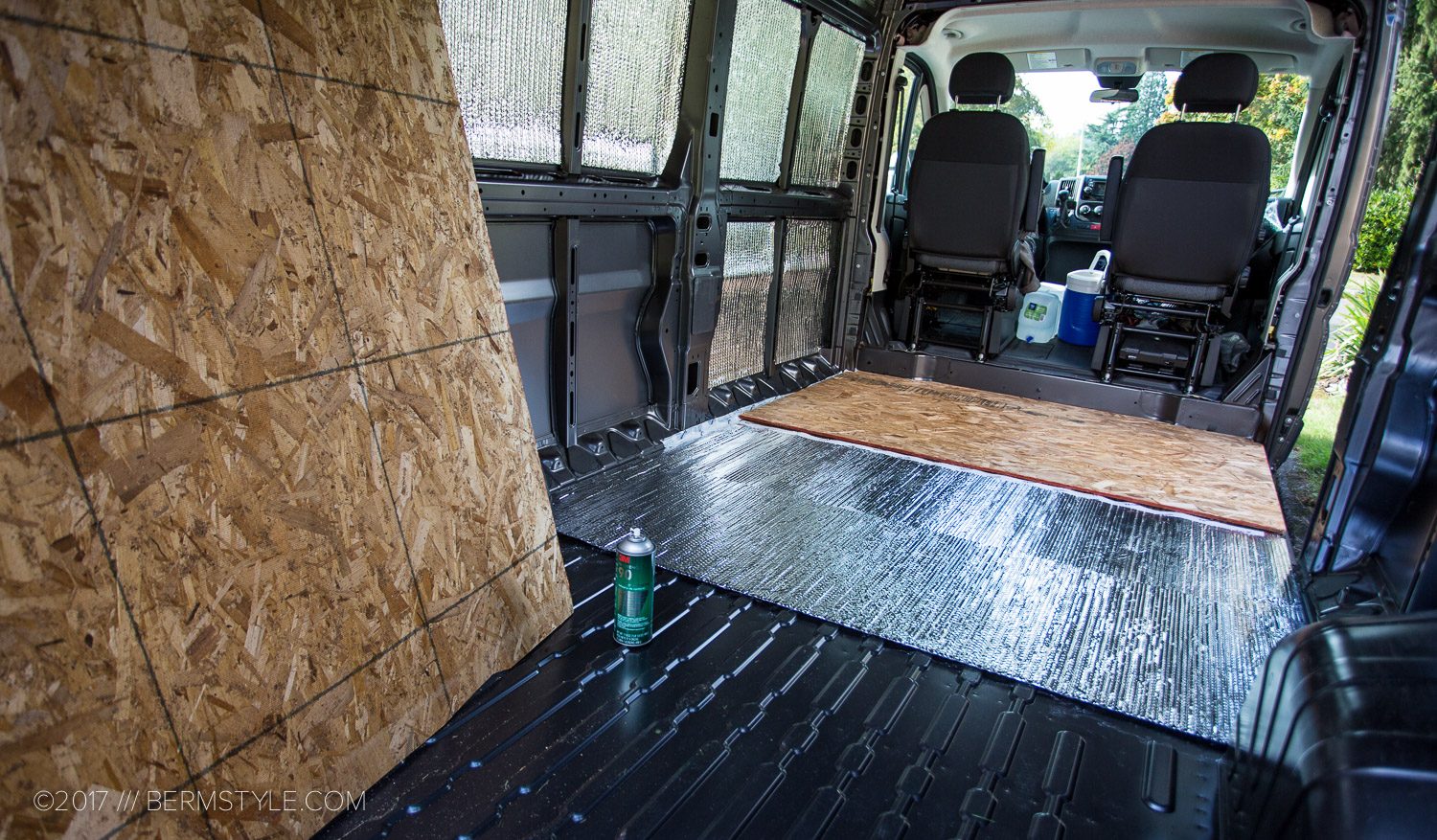 Laying down the floor. Our van came with a rubber mat, which I used as a template for cutting the plywood floor. It is easy to clean, so we’re keeping it for now.

The builds I kept coming back to for inspiration were: 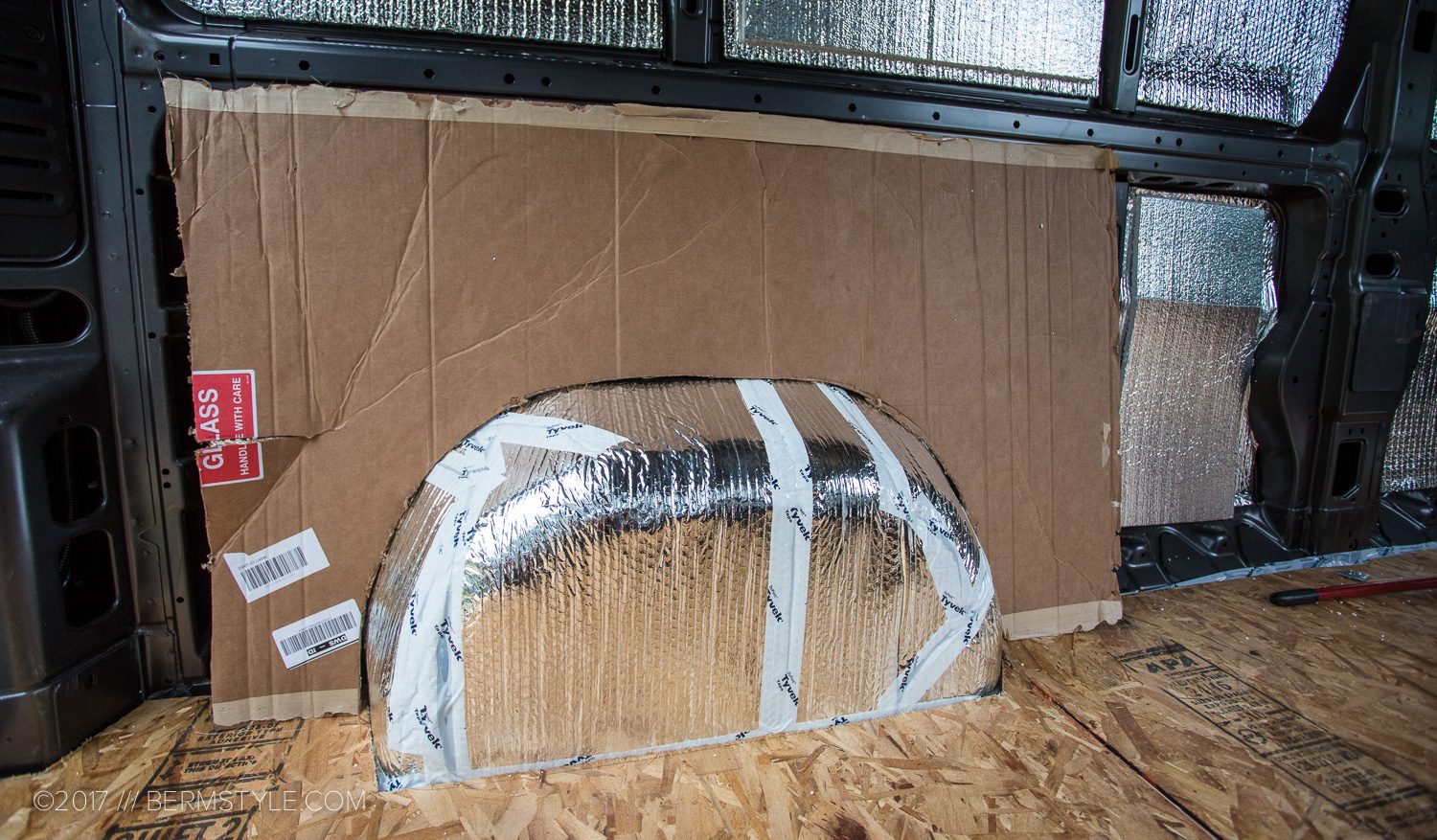 Creating a pattern for the wall panels using cardboard.

Other builds I frequently referenced included:

I learned quite a bit reading up on various builds, and found that others have the same, with quite a few blogs referencing other builds. I wasn’t familiar with pocket screws or plusnuts, and those are two interesting solutions for joining things. As our goal is to travel with up to 5 bikes covertly as possible, builds utilizing an elevated platform were my initial inspiration.

The Build Out, part 1: Insulation

Last summer I threw a temporary bed platform in the van, so to start I had to remove it. In the fall I began the process of adding insulation.

I used Reflectix based on the ease of installation as the first layer. Like others I used spray adhesive to mount it directly to the walls. From my understanding, Reflectix is designed to function best with an air gap, which is why most people use a second layer of insulation before installing paneling. On the upside, cutting stuff and gluing it to the walls is easy, and better than nothing. I decided I was going to hold off on building the ceiling for a while; I wanted to decide on a solution for power as well as the installation of a fan. Gluing silver bubble wrap to the ceiling and walls? That would only take a day. 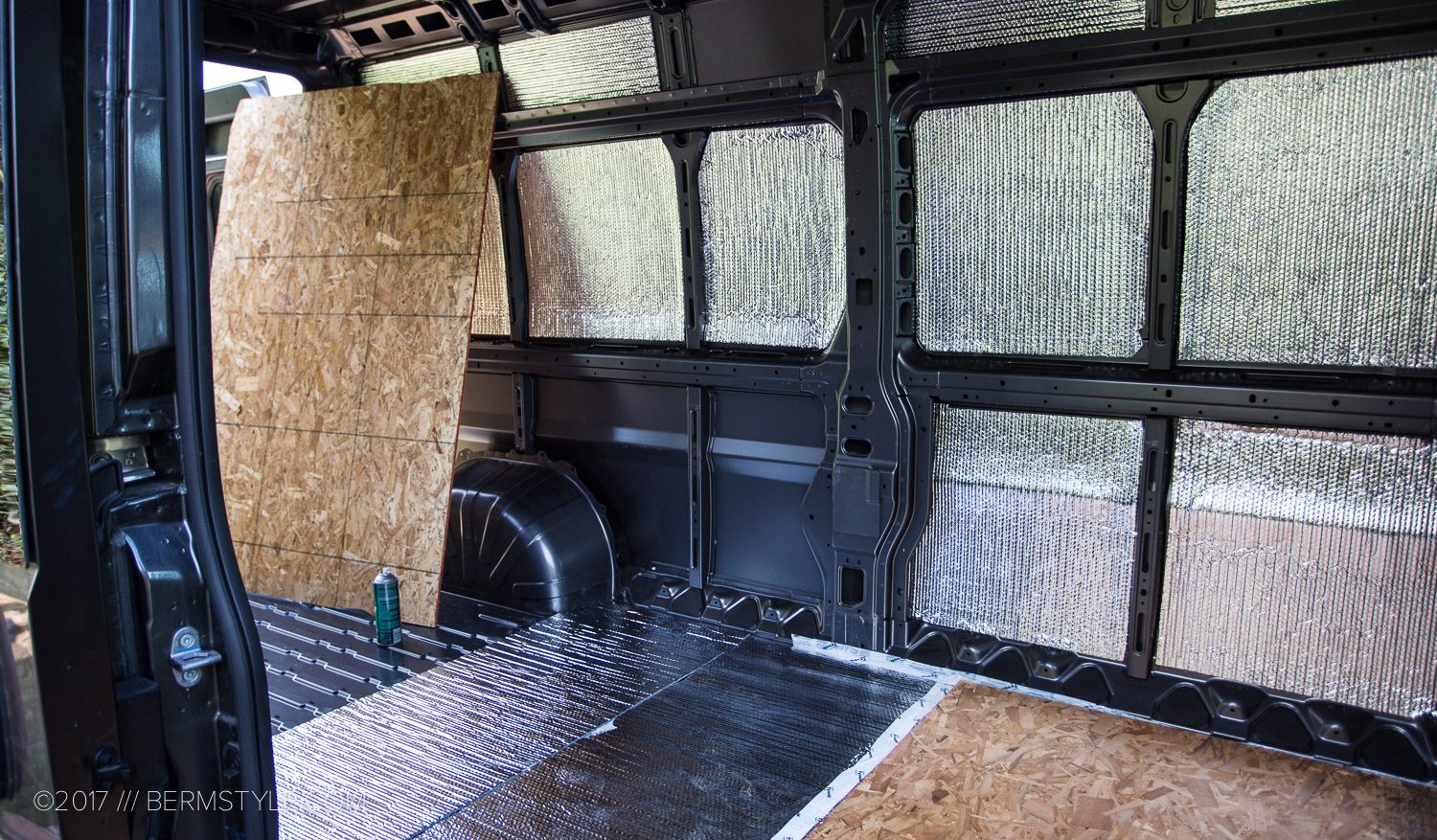 Probably not the best method, but easily accomplished with time.

It took a lot more than a day. That said, now that I’ve done it, it would go faster next time. (Provided I did it the same way next time) I used around three rolls of Reflectix, but didn’t have enough left over to cover my windows, so I purchased one more for a total of 4 rolls. I used 3m Spray Adhesive 90 to glue it to the walls, spraying a layer on the walls as well as the Reflectix and let it sit a minute before pressing it into play. I tried the 77 version in addition to the 90 strength; that was a bad idea. Going cheaper meant having to redo the job. Lesson learned.

Further research revealed this is probably not the best solution, but it has gotten us rolling. The upside: the amount of heat coming through the walls is noticeably less with a layer of Reflectix on the wall. 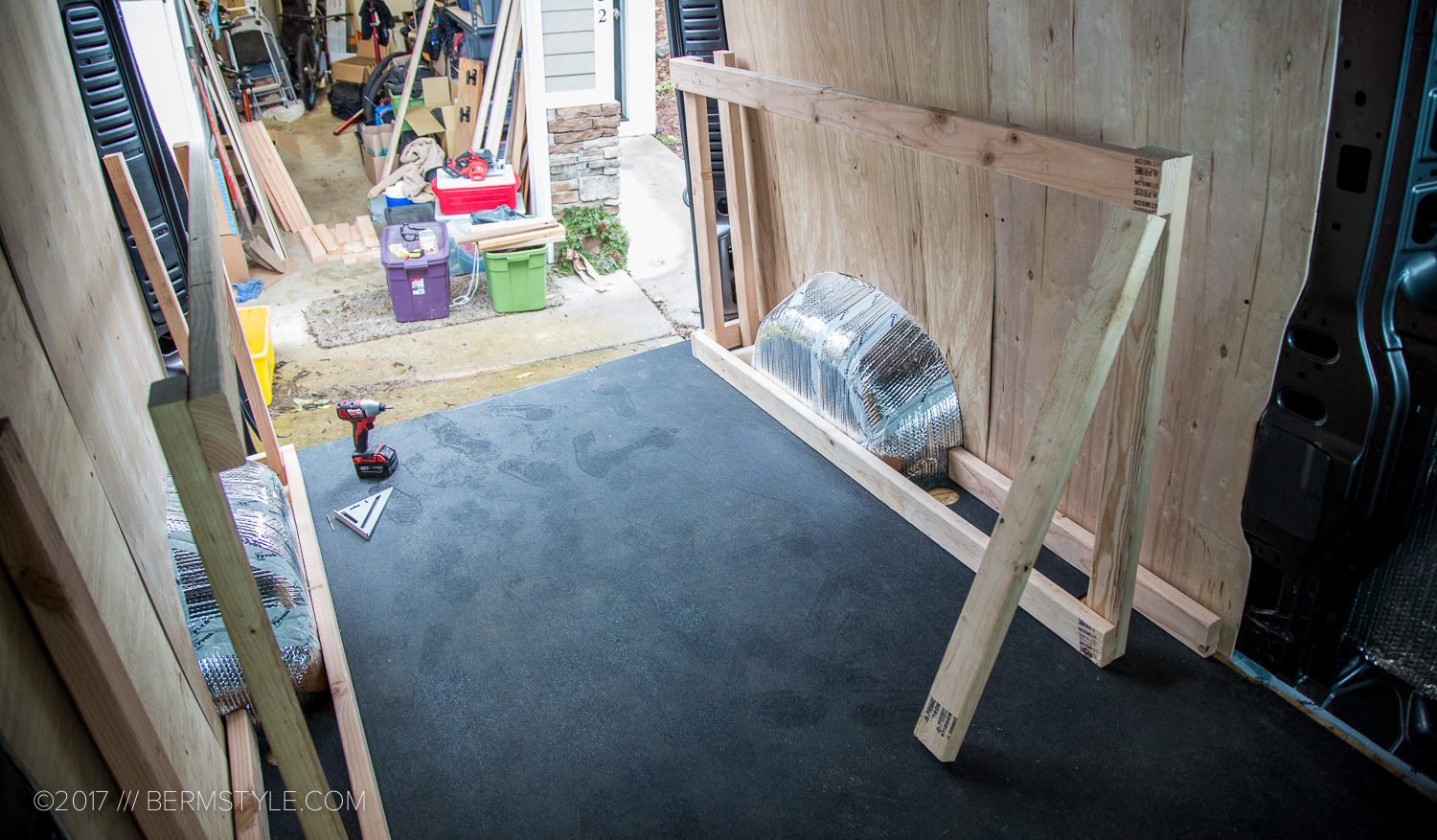 Getting walls up so I can start the bed platform.

The initial goal was to get the first layer of insulation up throughout the van and put down a floor. My van included a rubber mat as flooring, which made things easy. I would simply place it over plywood and trace the outlines. Some people lay down ribs to create a pocket of air, but I took the simple route and put down a layer of the Reflectix, and plywood over that.

I had debated using flooring from Home Depot and creating a finished floor. The living room in our house has this flooring, and I even picked up more. However, the rubber mat made a lot more sense for the bike storage area, and I already had it. I considered cutting it down but elected to run it as it was, as the ease of cleaning was hard to resist.

I added a second layer of R-Tech insulating sheathing and tacked up some plywood for walls. Ideally I think I’d add some thinsulate as well, as there is still space remaining under the plywood, but as the budget is currently still tight I elected to skip it for the time being and move forward. To mount the plywood to the walls I used self tapping screws to affix some basic ribs, which I would then use to screw paneling to. 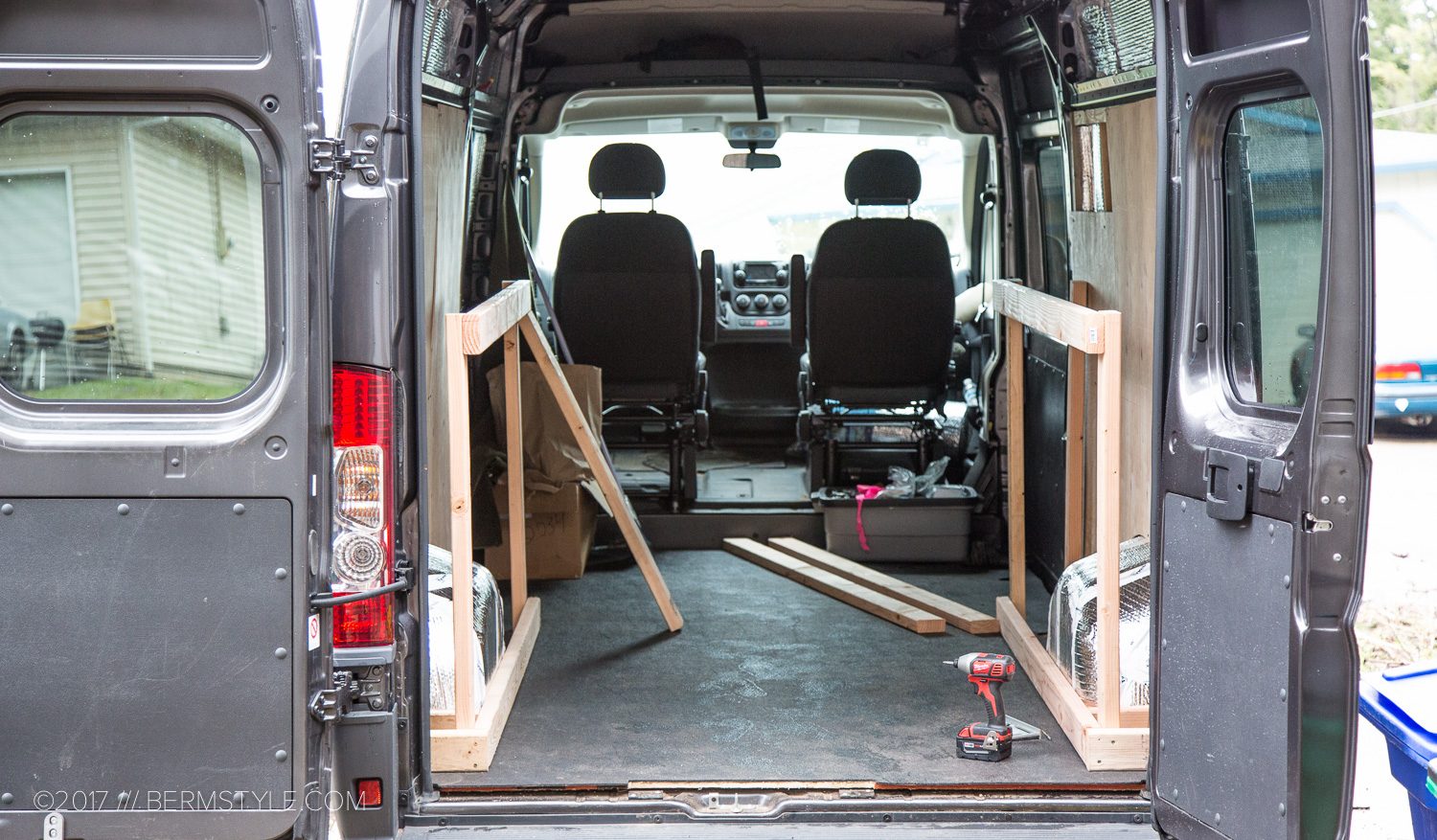 Starting on the bed platform

I have extremely limited woodworking skills, but years of wrenching on bikes and building legos means I’m great at following directions and pick things up quickly. Unfortunately I’ve never taken the time to properly dive into woodworking. Ideally I would have had someone fabricate a metal framed bed and helped me install it in order to maximize space and minimize weight, but since lumber is easier to work with, I headed back to Home Depot for more wood. The bed design from Sprinter Van Diaries, referenced a design on Instructables, that looked sturdy and simple enough to construct, so after scribbling a number a variations I started with my own take. In order to maximize cargo space, I moved my framing as wide as I could towards the wheel wells, as we really liked having the space when we were moving. 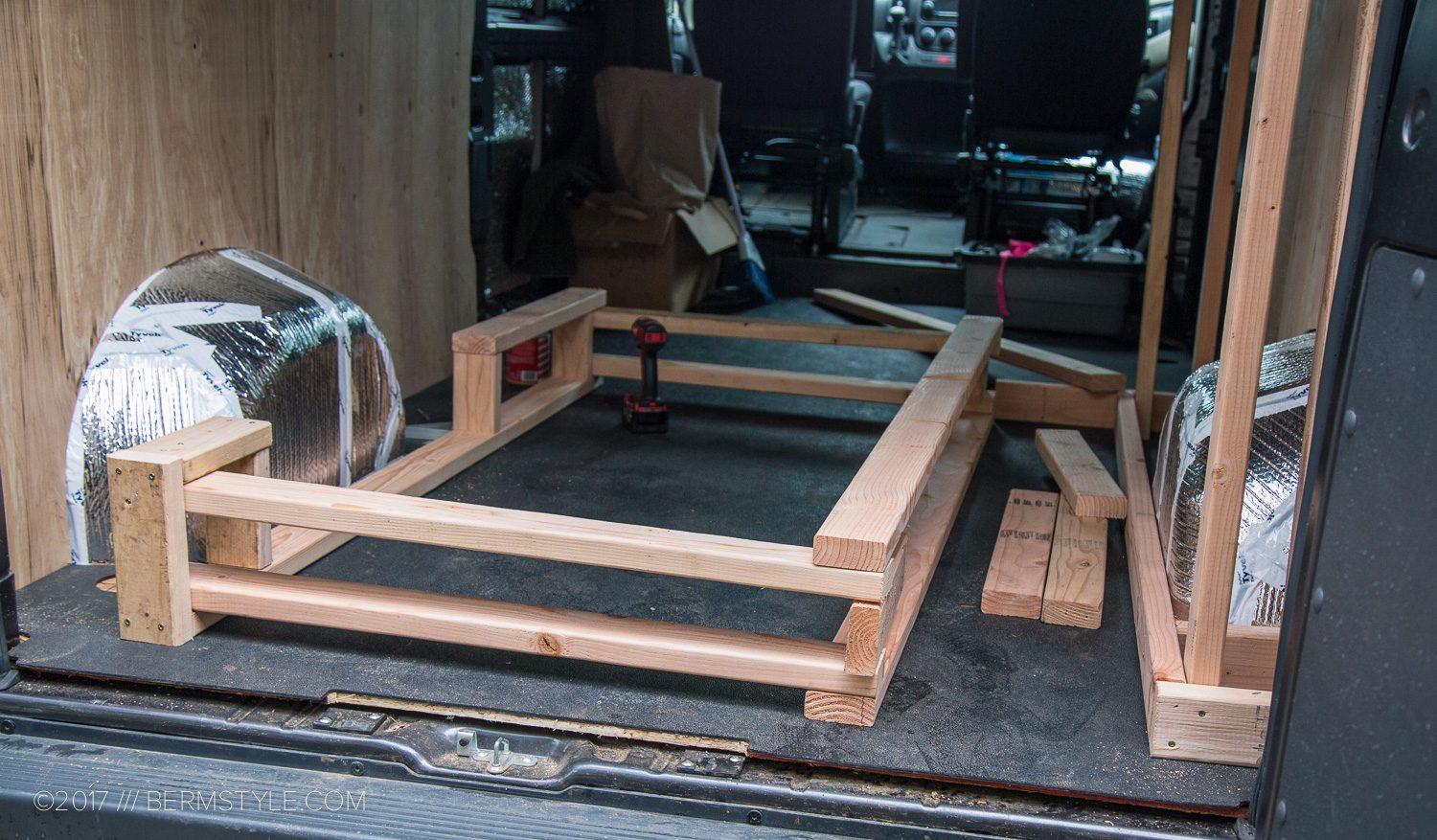 When framing up the supports for the bed platform, for some reason I went with 2x4s. In hindsight, my platform is far more overbuilt than it needs to be. On the upside, since I already had 3/4″ sheeting for the top, (from the 1st platform iteration) I used 2x3s for the ribbing. 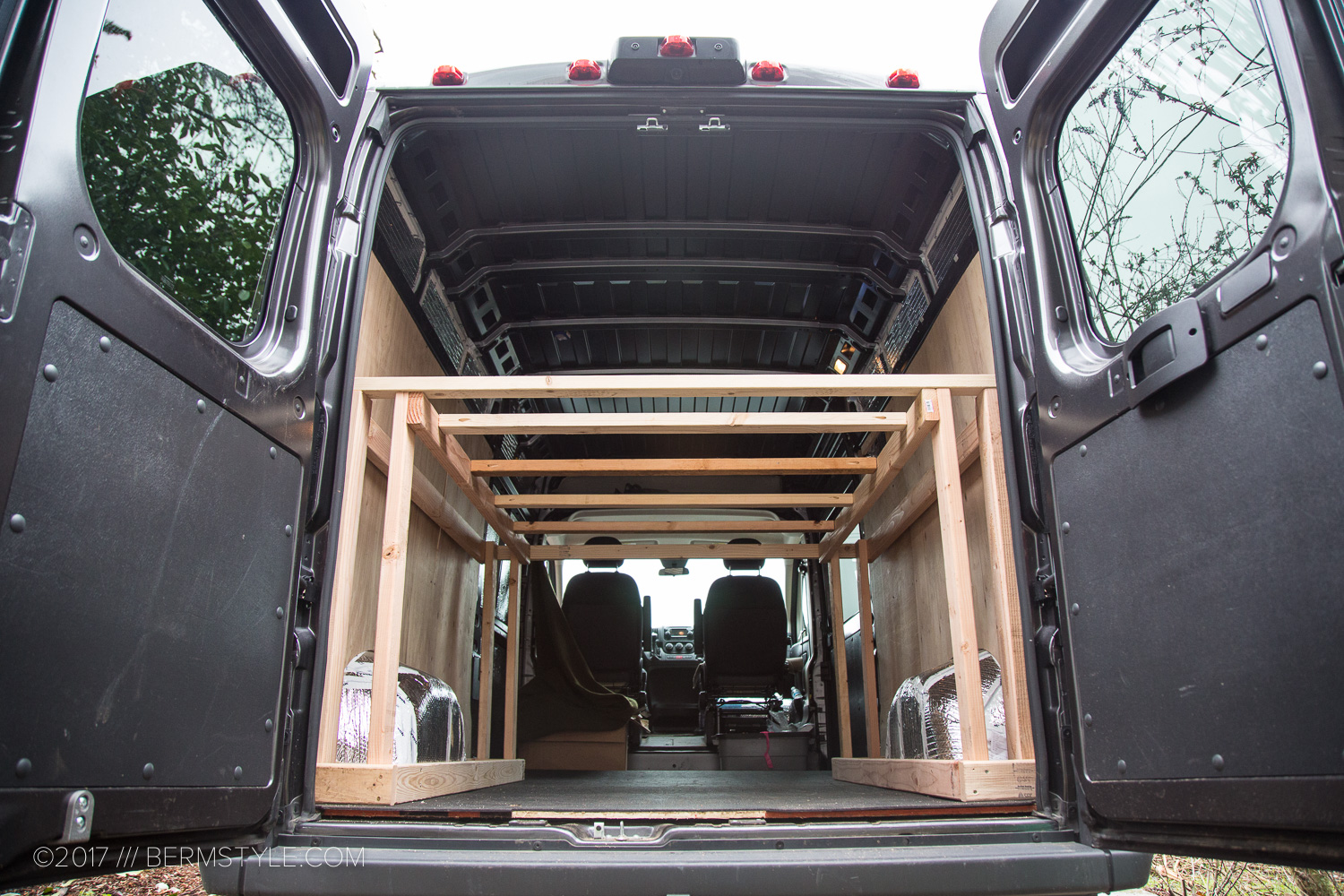 Ready for the top layer

I used pocket screws to attach the ribs, and to save time measuring where to place screws, placed a number of the ribs horizontal instead of vertical. I may add hinges and a secret storage space later, but as I have been thinking of adding a DH bike to the stable down the road elected to maximize vertical space, and the 3/4 ply is rock solid. 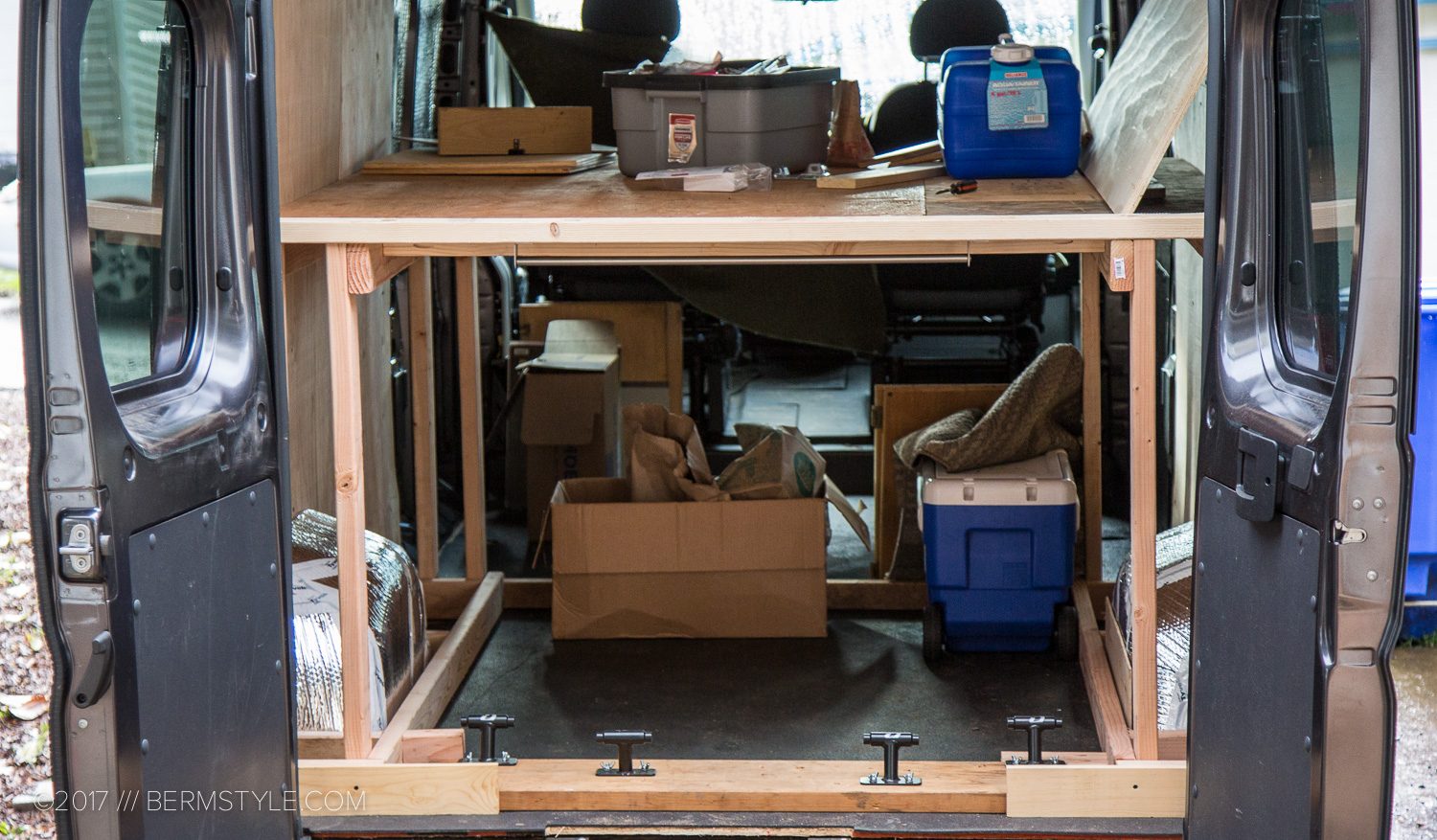 The bed platform is heavy but it’s rock solid. Ideally I’d have something lighter fabricated, but it more than fulfills our needs. The bottom clears 40″ which should fit a DH bike, but once I add the second layer of ceiling insulation and the ceiling, the over head space will lose a few inches.

We needed a way to carry bikes, so I bolted Kuat fork mounts to a 2×6, with some board tacked in to hold it in place while driving. I’d like to find a more elegant solution, but the nice thing about this quick job is I can pull the rack out to haul stuff. 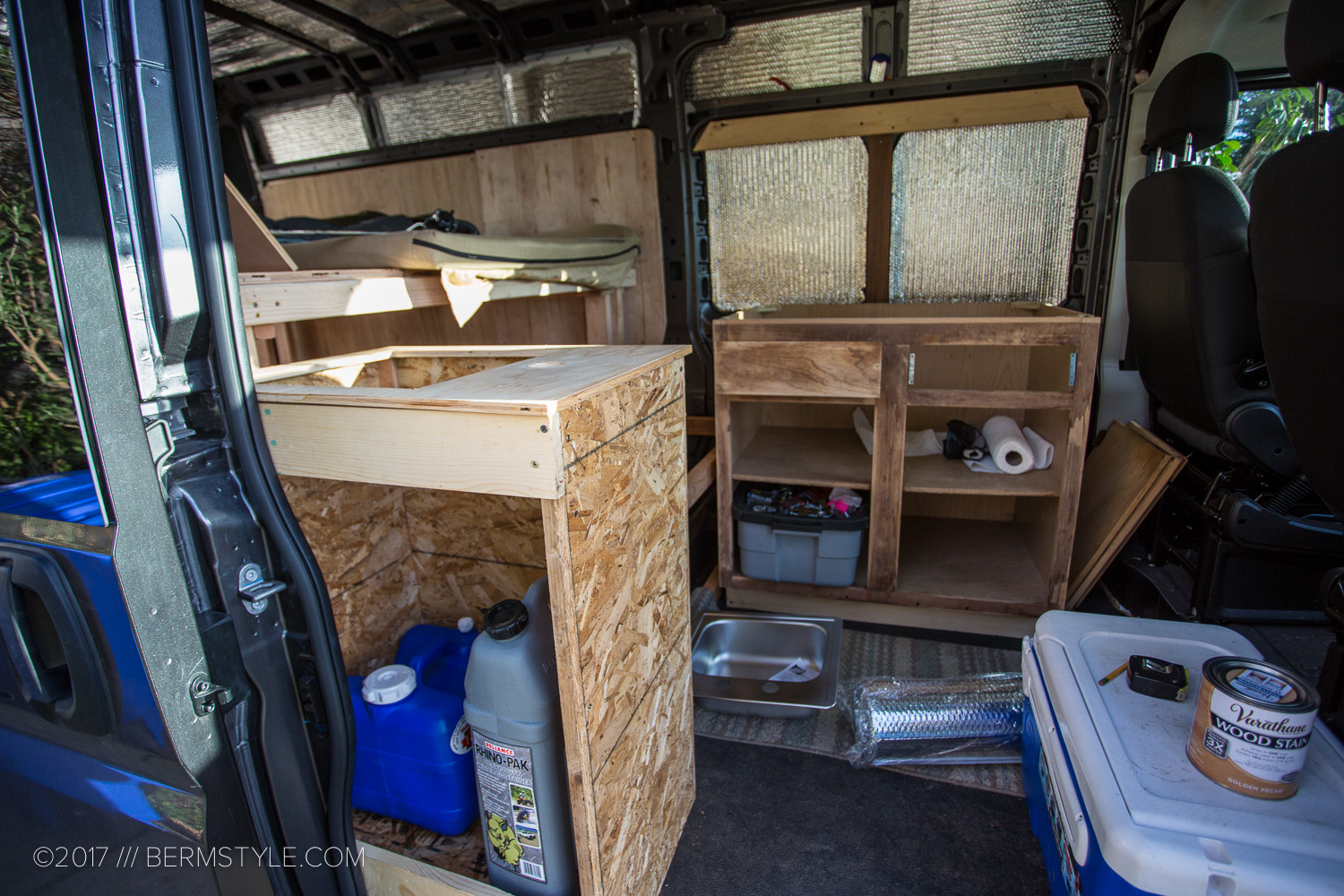 Having traveled extensively and lived out of gear bags, we were going to want somewhere to stowe gear as well as a sink and food prep area. I didn’t really want to get into woodworking at the moment, much less cabinet making due to a complete lack of free time, so I started looking into off the shelf cabinets. I passed a free cabinet on the site of the road a few days later that was the exact dimensions as one I had my eye on at Home Depot, and quickly ran home to pick it up with the van. It needed some work, so I went to the hardware store, bought a power sander and cleaned it up. It’s a bit deeper than I’d like ideally; I also had no idea how I’d make the water jugs fit so I ended up using it as a template and building a cabinet after all. 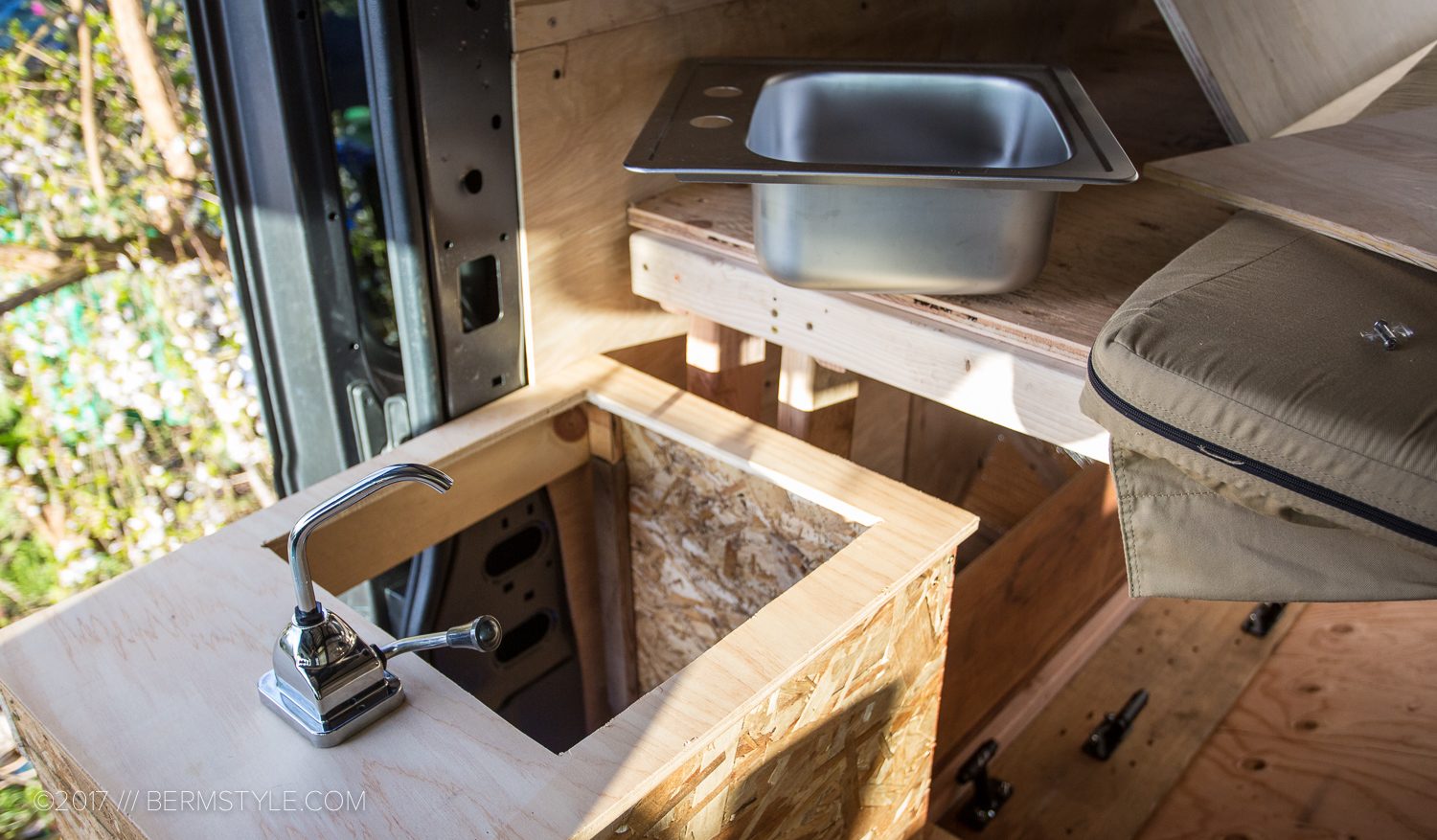 The plywood I had didn’t look very nice, and since we didn’t want slivers I figured I’d toss a few coats of paint on it to spruce it up a bit. 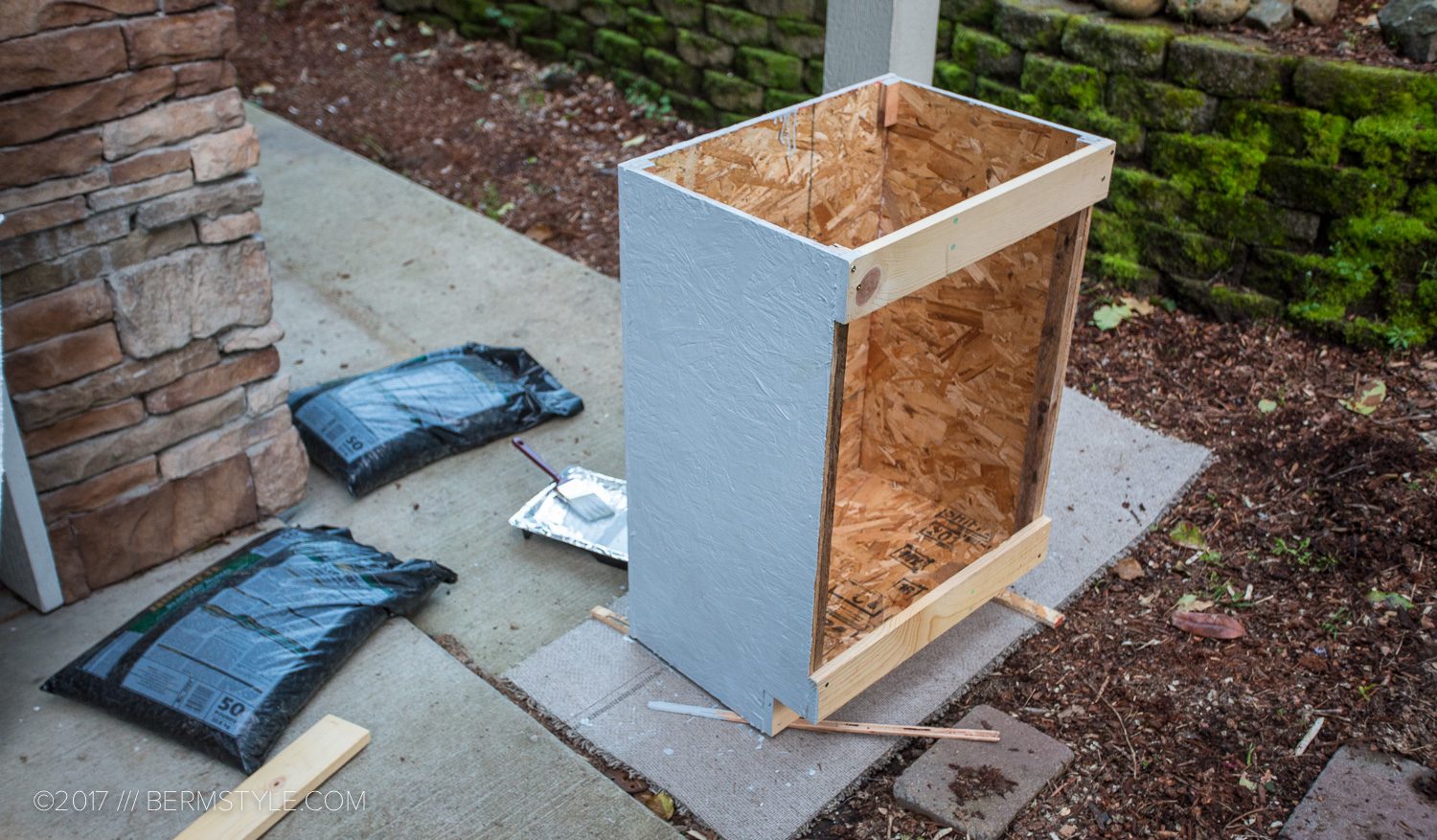 Lipstick on a pig

My deadline for our first trip was coming up quickly, and we were about to be living with whatever I could come up with for over a week on the road, so it was time to sort out more storage. My recycled cabinet was hogging a lot of space, but it fit the storage tubs we currently have so it would definitely work for the time being. 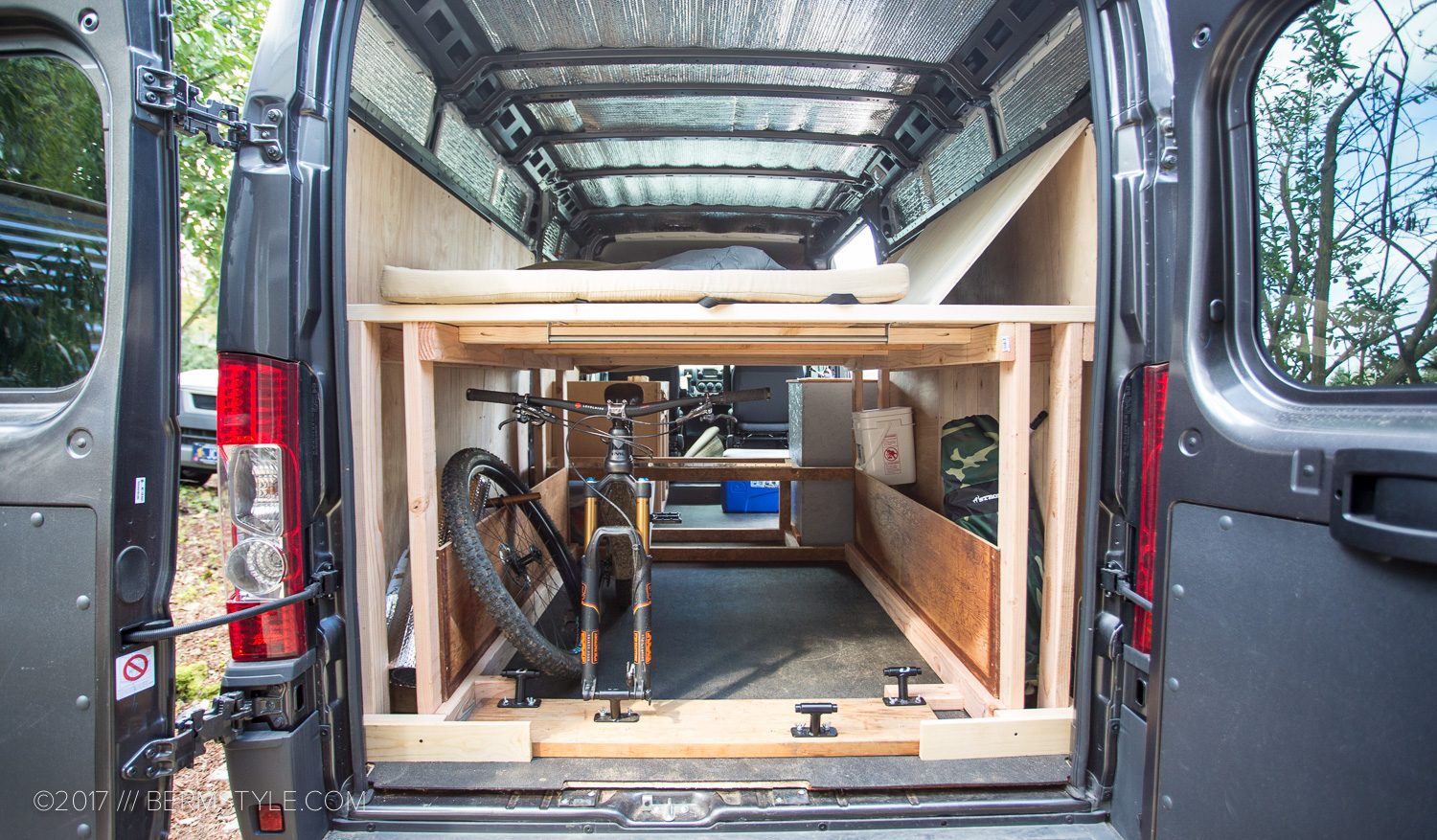 I wanted somewhere to sit though, and we’d also need an easy way to get onto the bed, so I framed up a basic box for a bench, sized to fit two more of our storage tubs, attaching the lid with a piano hinge. 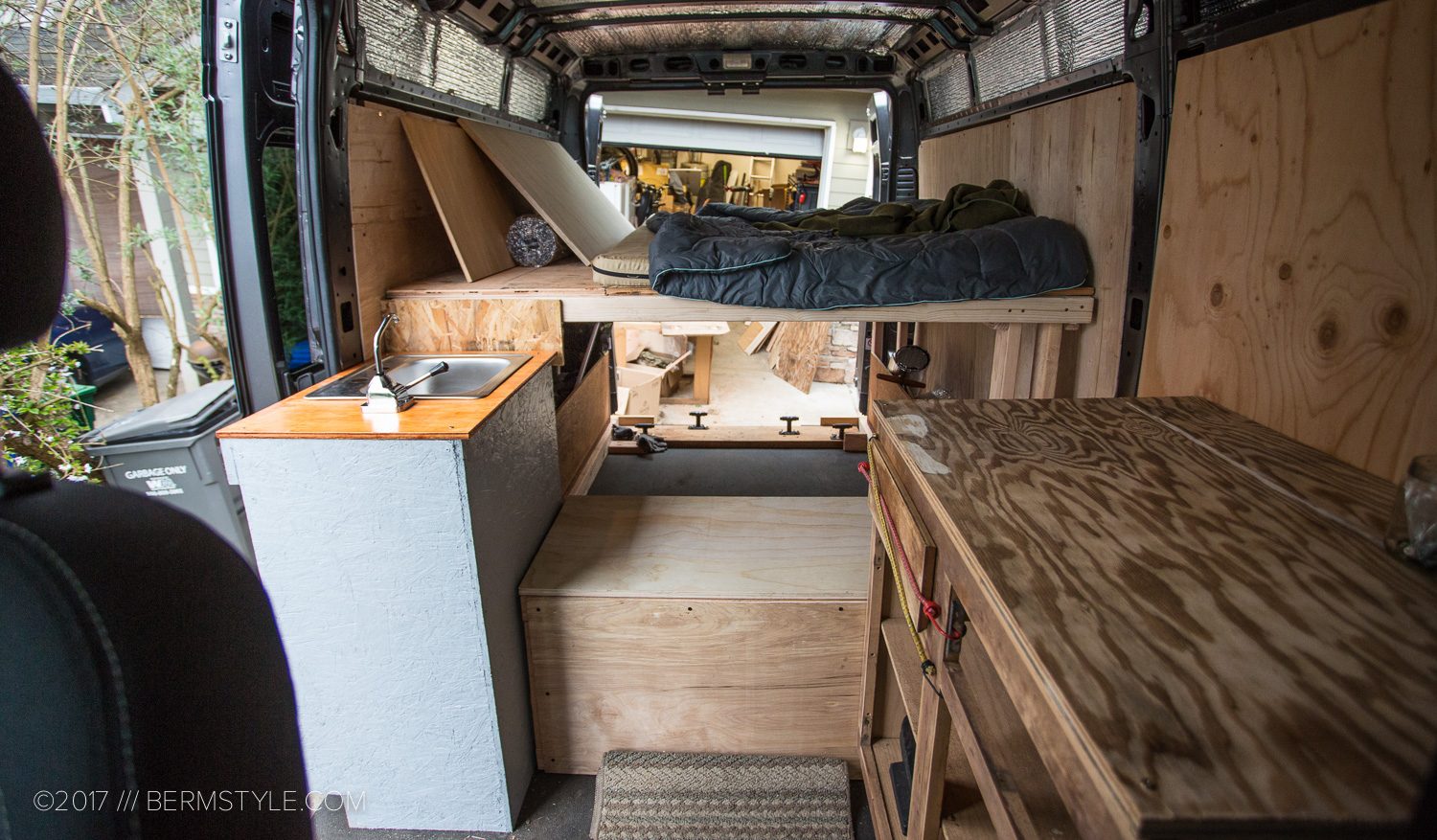 And now we have a bench with more storage.

I wasn’t going to get power sorted out before big trip #1. I had considered straight up purchasing a Goal Zero Yeti, but they’re not very affordable, and I wasn’t sure about its ability to fill our long term needs.

Finish work was going to have to wait until after trip #1.. or two or three. It was time to test things out and see what worked and what didn’t for us.

NEXT: Part 3: Living the #VanLife