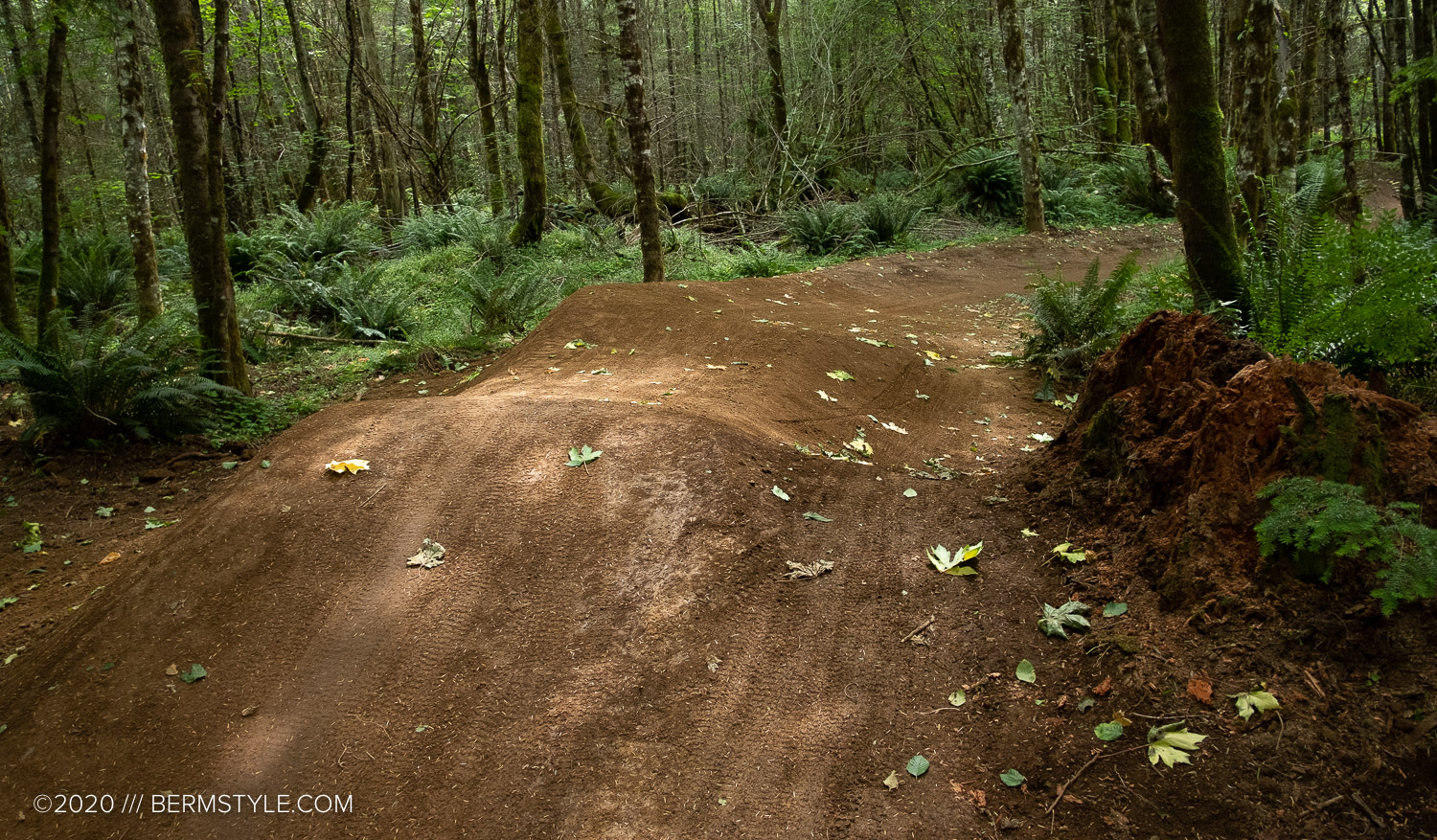 After: the lower jumps have been filled in and made more friendly to riders looking to progress their jump skills.

On June 18th, 2020 it was announced that trail contractors were to begin improvements at Sandy Ridge:

Eager to view the long-awaited updates, we headed to Sandy to take a look at some of the improvements to one of our favorite jump trails, Johnny Royal. 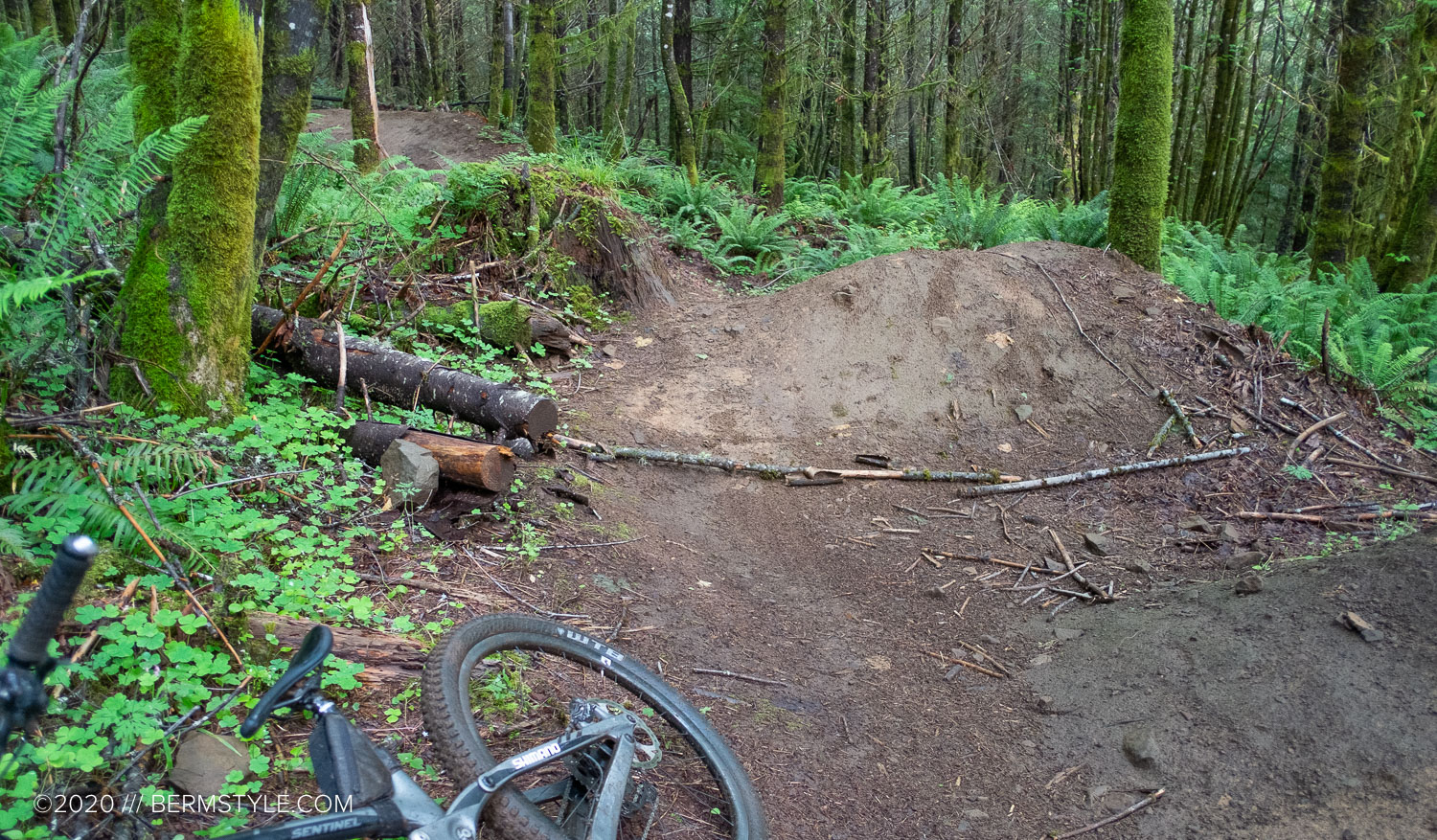 Before: this jump would often have branches and logs placed in the gap, which could present a liability concern. June 17, 2020.

The first round of work focused on the lower section of the trail. It had never officially been completed; not only did the smaller jumps feel significantly different from the larger upper features, but many of them were not rollable, with some of them even containing placed logs and debris. As the rest of the trail was rollable, blind features populated with hazards could lead to precariousness. 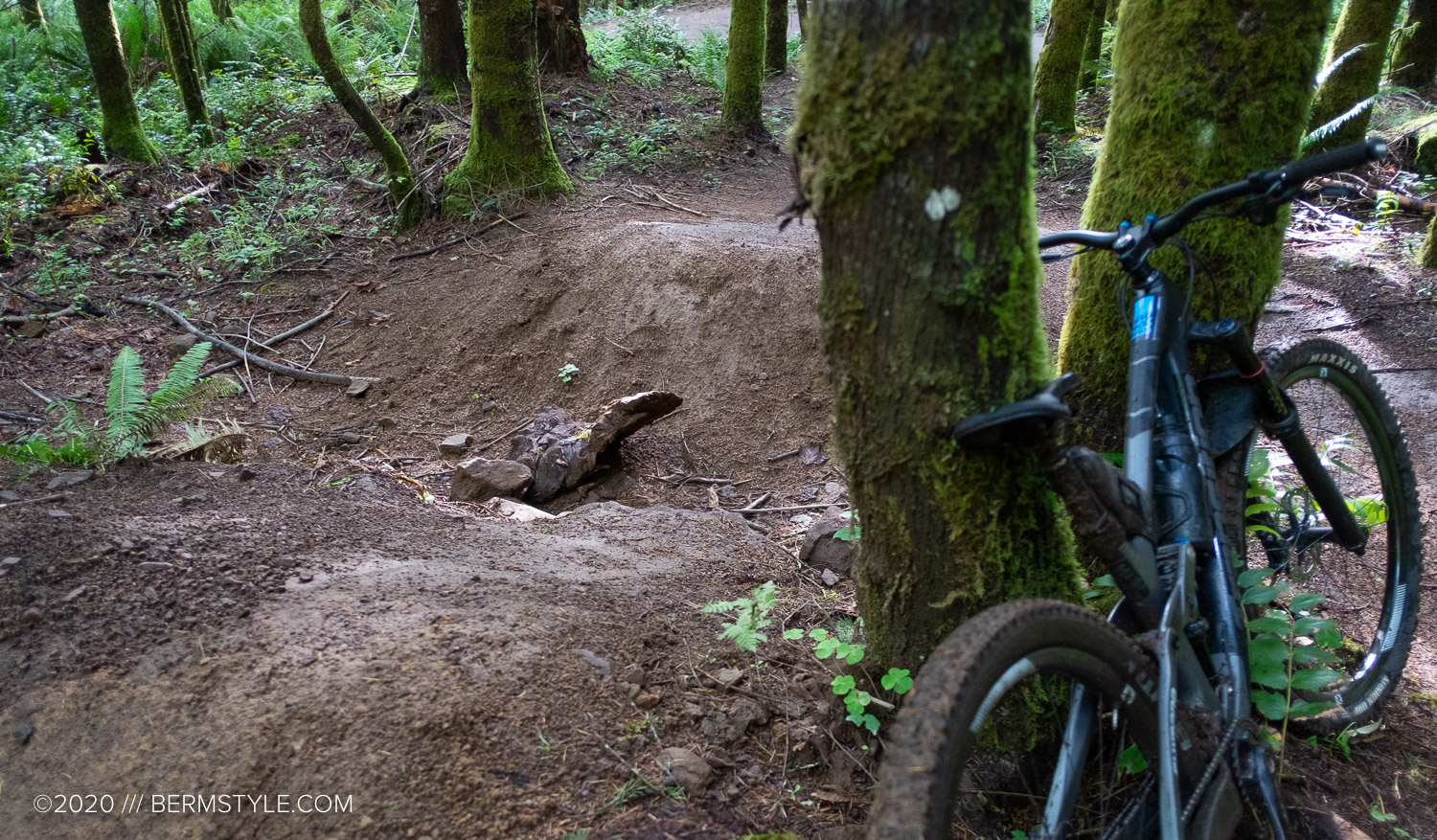 Any rider crash as a result of placed logs could justifiably have a legal case had they caused an injury, which has been a cause for concern. 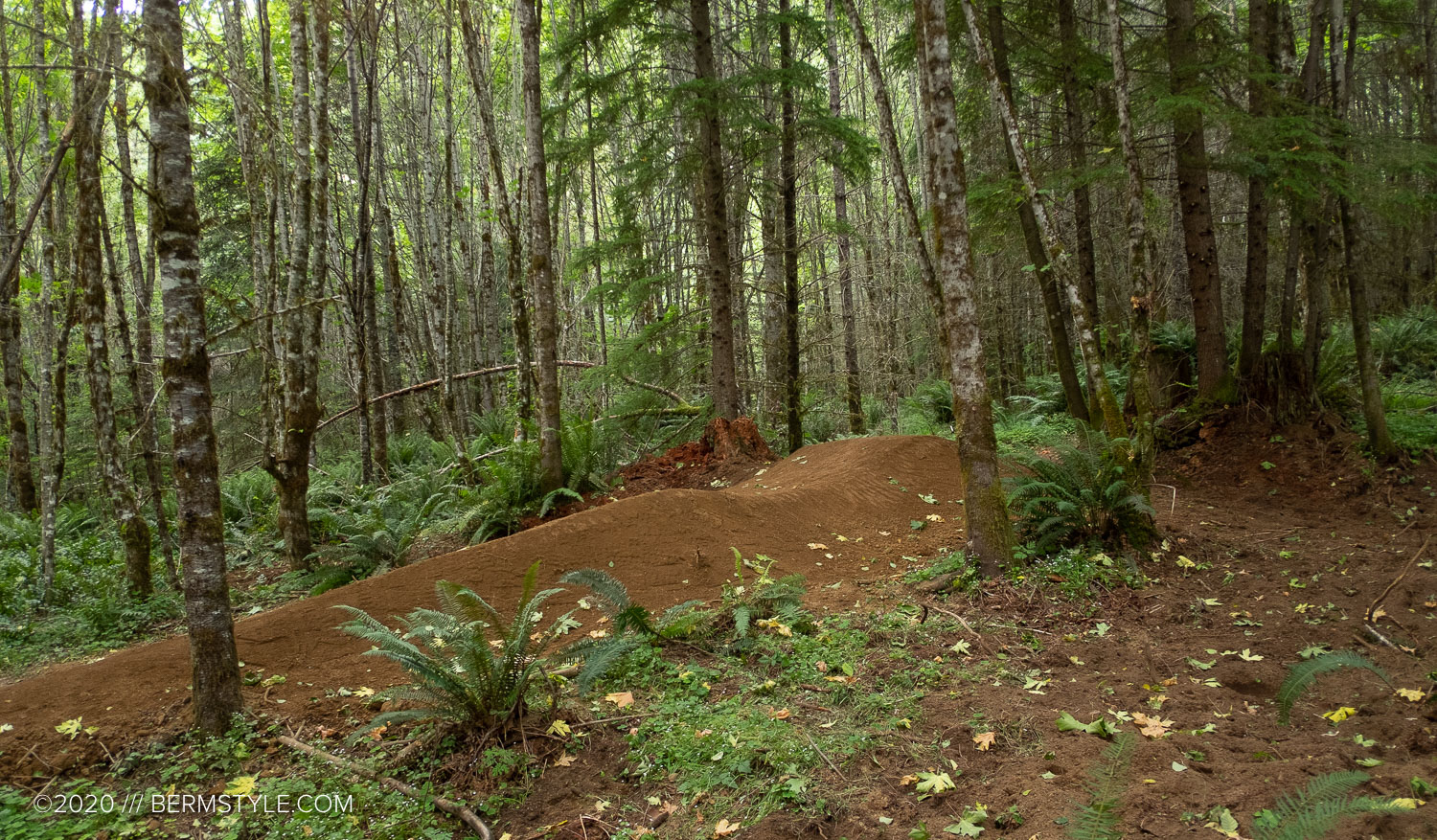 After riding the revamped trail, it was clear the flow and experience remained the same, while removing the hazards. The trail had been substantially improved with a number of upgrades to the features as well. 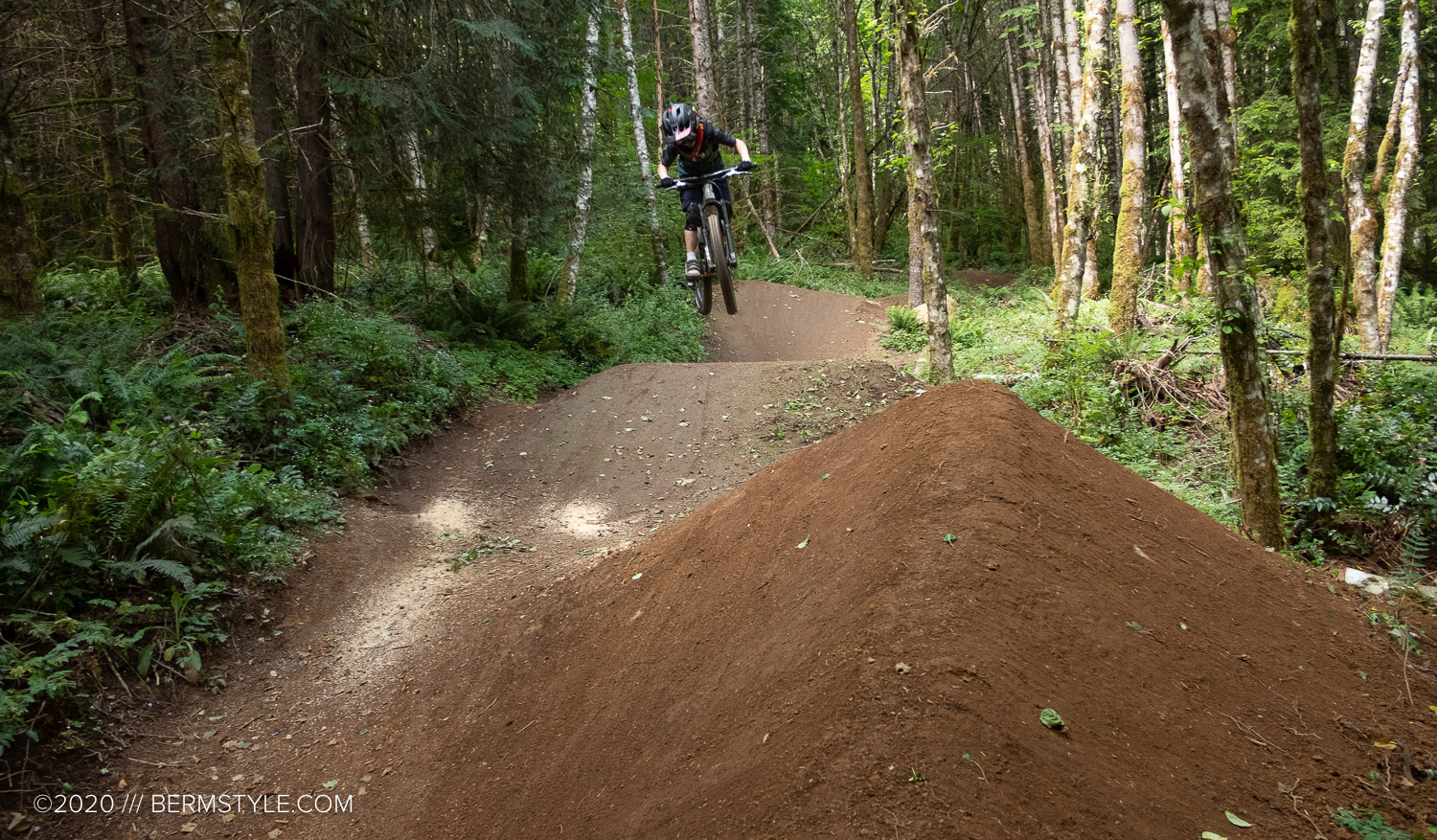 Some of the lips and landings were built up, making it easy to carry momentum and improve flow. 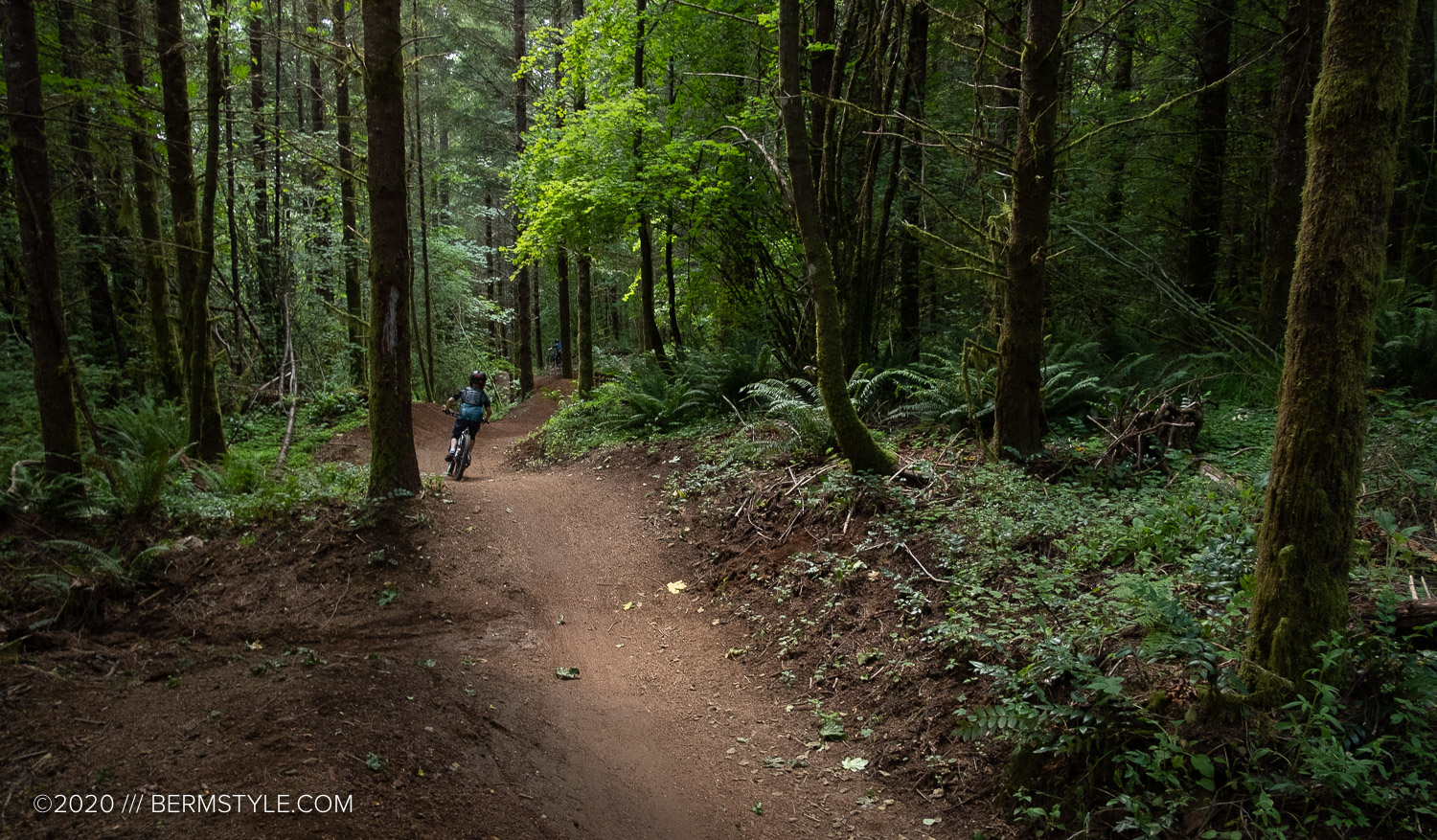 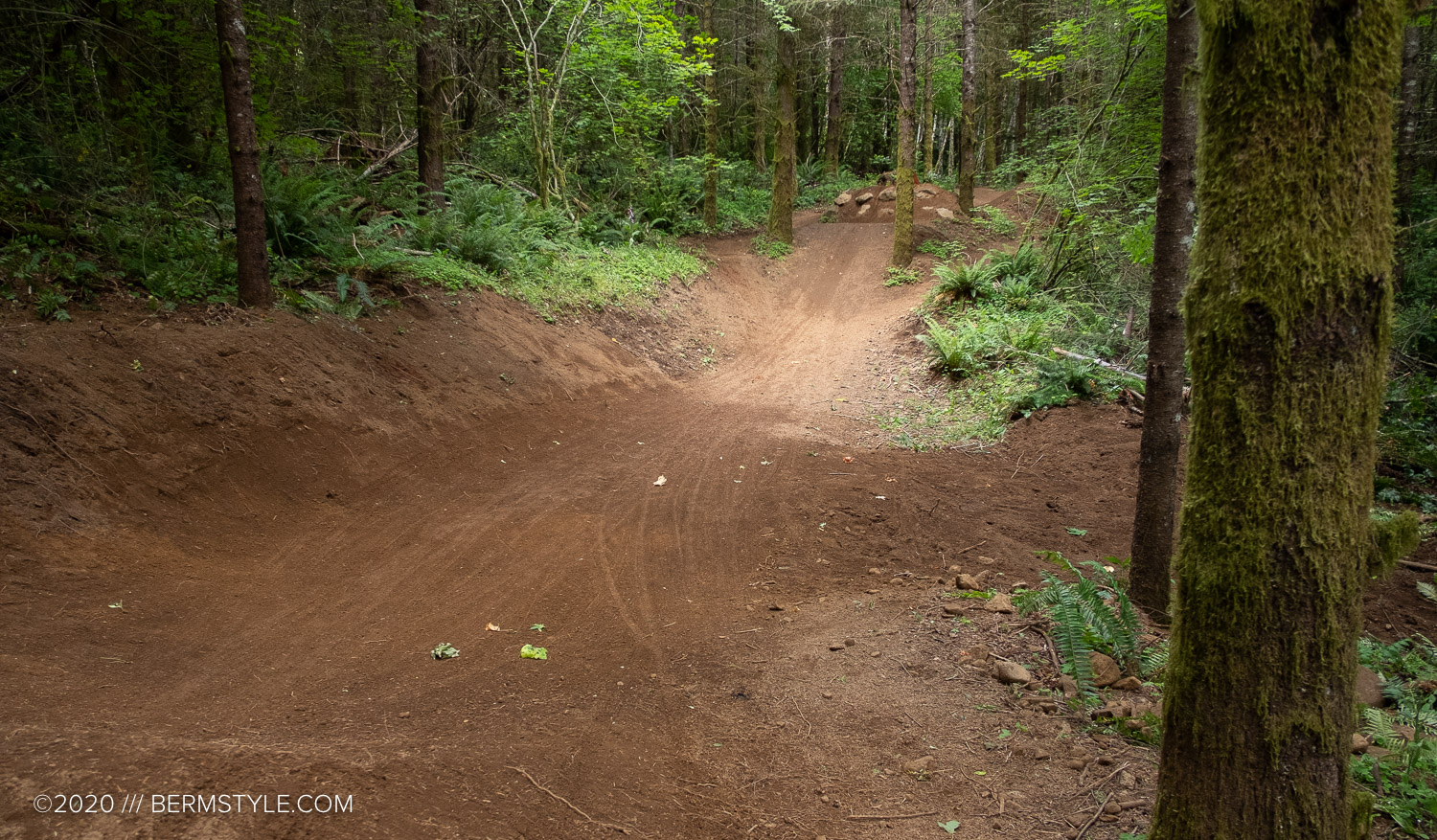 We spotted a number of cleared drains, some of which appeared to be new additions. 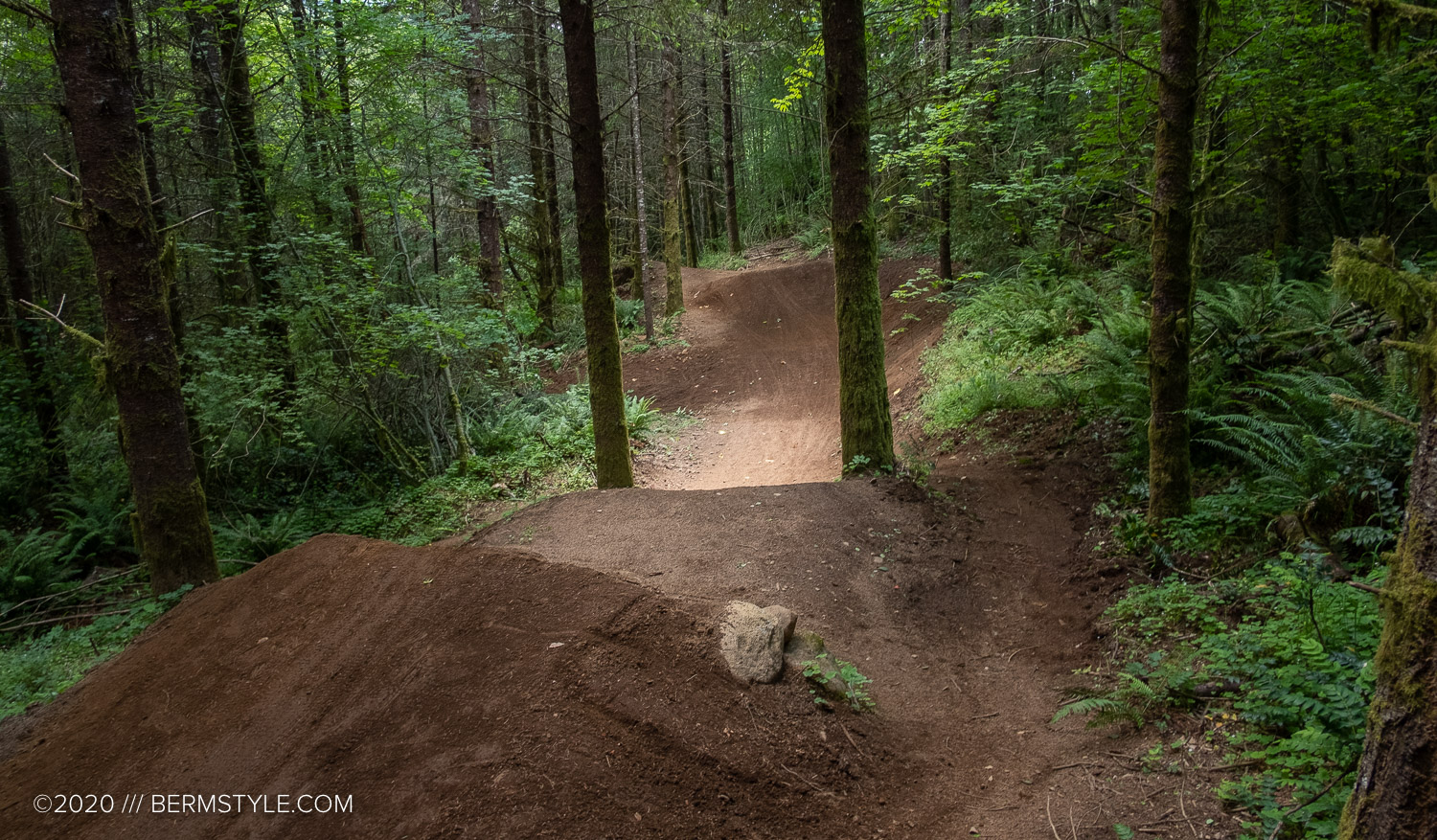 The above step down received a small increase in height making it even more fun. The lip of the hip jump that followed it was improved, and the go-around was given some love. 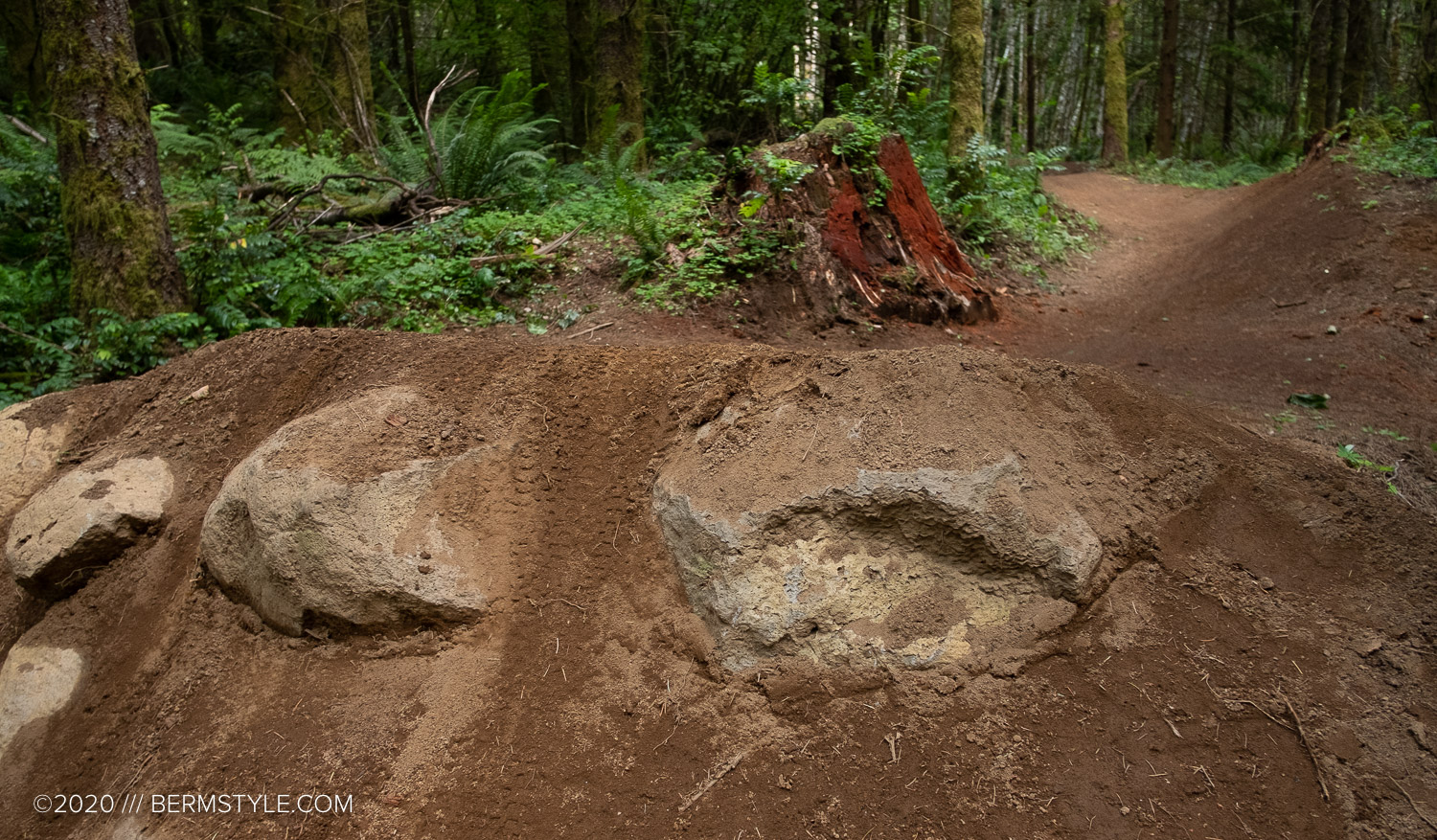 Unfortunately, within a day of the trail work, it appears a number of the lips have already been rolled. While it’s to be expected, it presents a cause of frustration to the riders that can ride the trail as intended as it breaks down the take-offs. 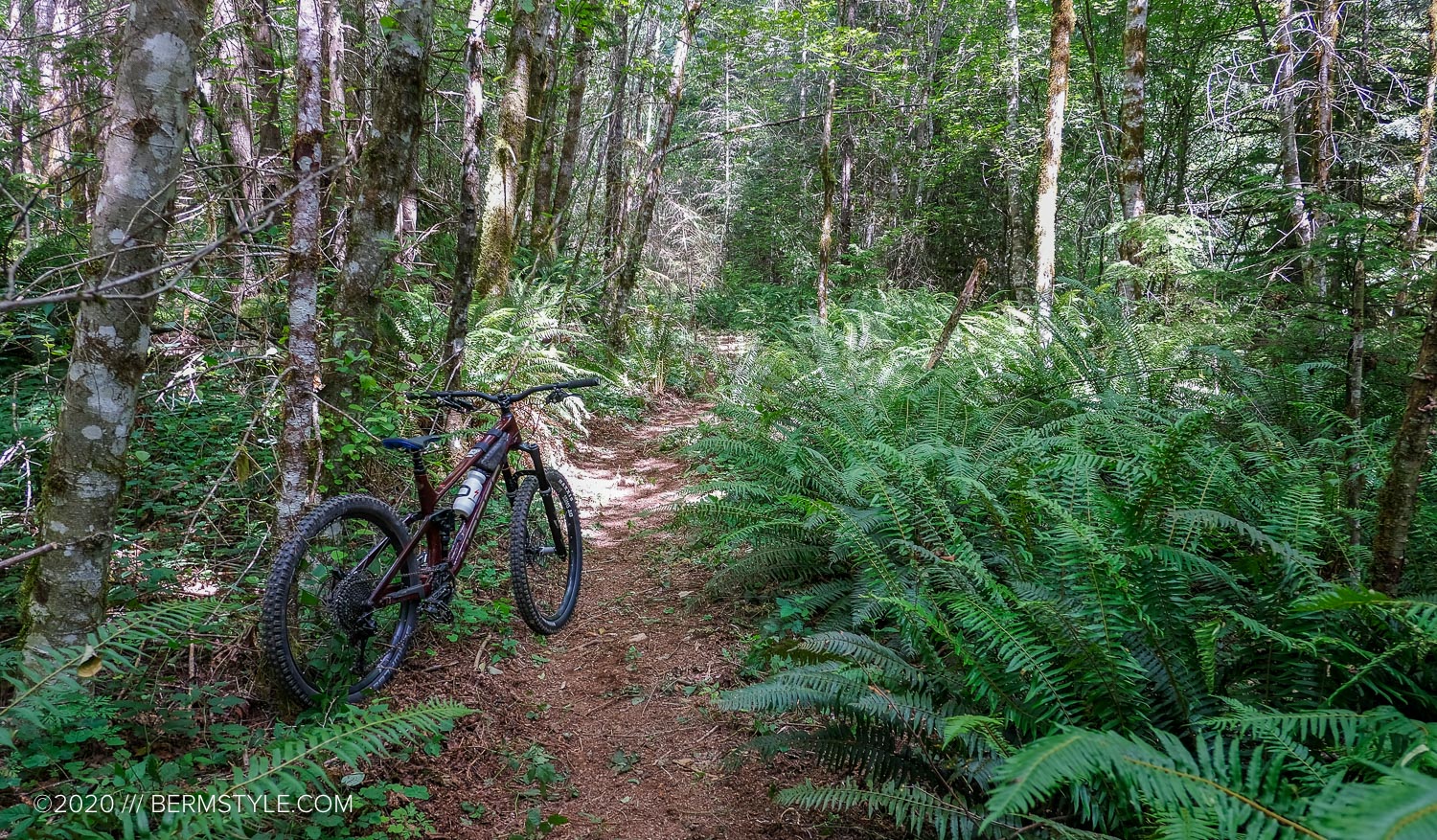 The other item we discovered was a new climbing trail that allows access to the lower section of JR. It’s now easier to access and session the lower segment. 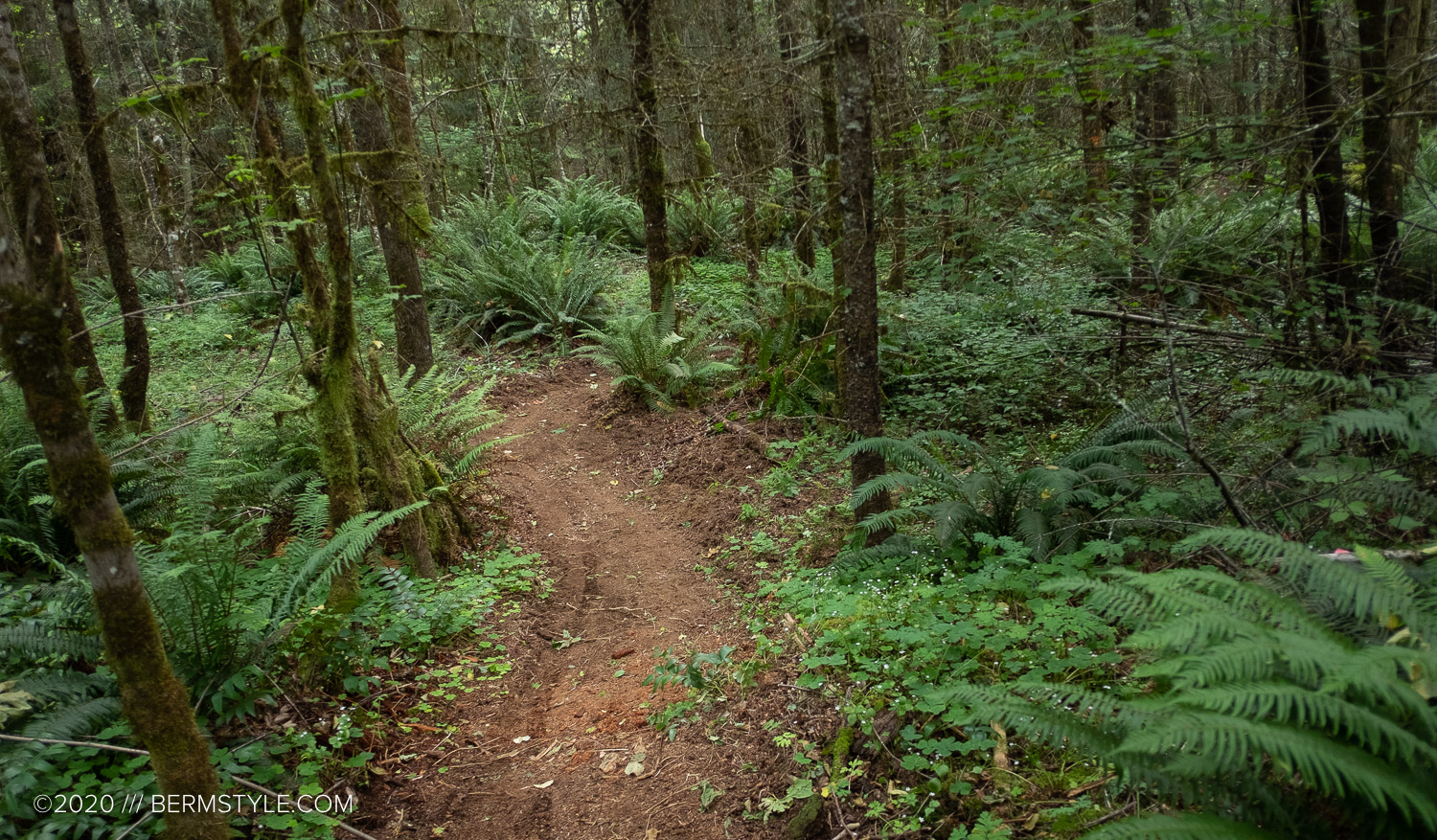 We’re keeping our fingers crossed that the upper segment will receive upgrades as well. The step-up at the top has a rather short landing that is easy to overshoot.. which can be rather harsh. We’re hoping the landing is extended at the very least – that would allow riders to err on the side of going faster.

Quid Pro Flow is also on the list to receive attention.  As fans of this trail, we’re hoping it receives some machine love. It’s a great alignment but the berms have eroded; we’d also love to see some alt lines on the jumps that lengthen them. Ideally, some of them could be modified to be like a JR-junior type flow.

We’ll update this post as we receive updates on Portland’s favorite MTB destination.