One of the best days of riding I’ve had this summer was during my trip to the northwest. I’ve been hearing all sorts of good things about a new trail in the Camus area in southwest Washington. Camus is a town a short drive away from Portland, a city known for being bike friendly but lacking in off road riding opportunities. Although there aren’t places to ride in town, there is a strong and tight knit gravity scene, and there are sweet trails in almost any direction away from the city, provided you spend an hour or two in the car getting there.

If you’re a fan of fast and flowy DH trails littered with jumps, berms and turns like we are, the trail has everything one could hope for in a sweet shuttle-friendly package. Runs down the entire length run 7-10 minutes on average, and the shuttle truck was always there at the bottom ready to haul us back up. Over the course of the day we did at least 6 or 7 runs down the mountain, and I spent more quality time on my new Driver 8 in one morning than I have to date. (I know, kind of sad) 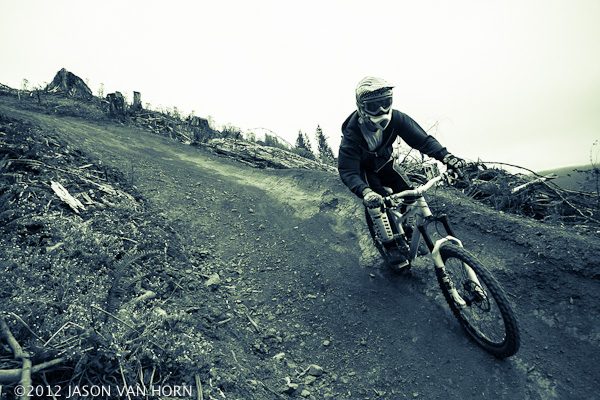 The fast, wide open sections of the trail made me long for slacker angles on my bike and a dual crown fork, but anything with 6″+ of travel and DH tires is fun on this trail. One of the more exciting parts of the trail is a set of three jumps at the end of the clear cut section, where the crew was able to get permission to build some rather sizable table tops with a machine. I found it took me a run or two just to get used to the amount of speed required to launch the sets successfully- googles required. 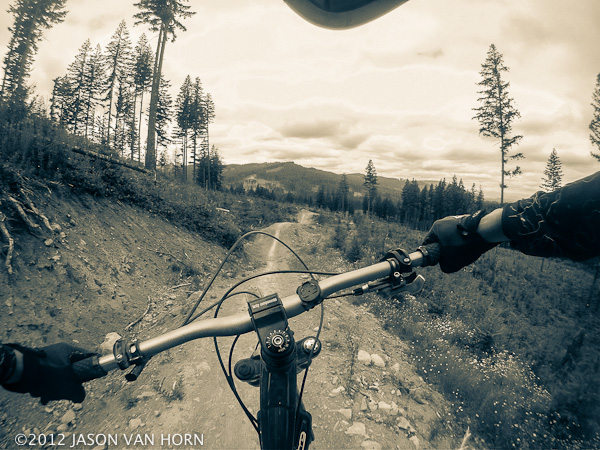 Mid-air on the first set on the big jump section on Thrillium.

Once comfortable with the amount of speed needed (pedaling out of the berm into the first set made boosting them much easier) you’re rewarded with some feel-good hang time.

The new trail isn’t an ordinary trail build. According to Joseph Rager, one of the riders at the heart of the movement to get legal DH trails built, its the first of its kind on Washington State Land. A DNR Sanctioned, legal and user specific, one-way trail on public land, designed for gravity riding and shuttling.

Here’s an abbreviated story of how it all came together via Max Miller, AKA Maximum Radness, that outlines some of the challenges they faced in building the line:

JR had been contacted to build the DH line, due to his activity in the race, FR and home jump scenes. After he GPS’d his ass off, he realized he needed a lot of help. He asked me and about four other guys, some of them legendary illegal trail builders, to join in. This was done in an effort to consolidate the illegal activities on the mountain and to get those dudes outta the way, and into the fray!
We banded together under his liaison role, and under the instructions and sanctioning of CCMTB to build one bad ass muther. We tried to stay on the ridge, that way we would have no uphill. We failed, but battled tirelessly within and without to get it right.
We did okay.
We got permission to use machines on sections of trail, and that led to a bike park like flow and feature size and style; which, incidentally, is the only thing that could withstand the traffic. We have had numerous build days, and lots and lots of help form all kinds of MTB’ers. Three years later, many friendships destroyed and rebuilt and new ones found, we have finished—kinda. The trail grows in popularity everyday and traffic is getting very, very heavy. We’re foreseeing Sandy Ridge numbers or better. Which leads the DNR to secretly admit that they will approve future trails when traffic and trail usage indicate it is necessary — stoked!!
For now, we are having a grand opening event, not unlike MTBO where we will guide the AM and XC trails in the zone, and shuttle the shit outta the AM and DH trails in the cold creek drainage and have an epic multi run dh-enduro race on sunday, on Thrillium —you’re invited.

The official opening ride and shuttle party is this weekend. I’m super bummed I won’t be there.
For more info on the Cold Creek Mountain Bikers, Thrillium and the ride event visit ColdCreekMTB.org 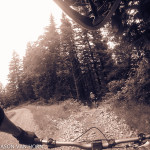 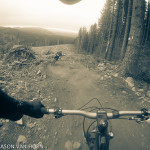 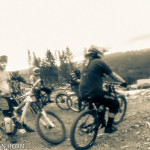 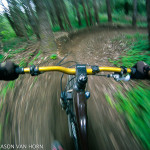 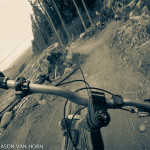 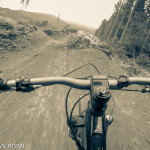 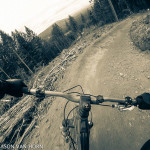 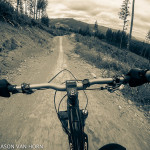 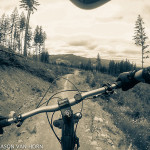 Mid-air on the first set on the big jump section on Thrillium. 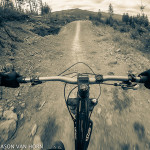 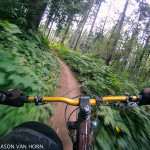 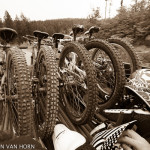 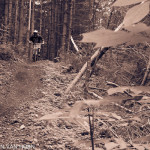 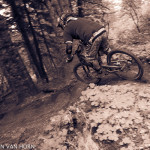 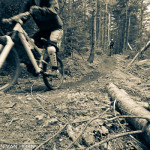 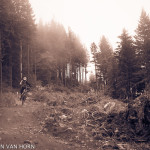 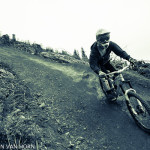 Special thanks to Victor and the Crew at Universal Cycles in Portland for the shuttles and guided tour of the trails. Not only are they a rad group of riding fools, they also have one of the best selections of riding gear around. If you’re in town, check out their shop.