UPDATE: We removed this post 3/20/15 when our webhost informed us that we had been accused of libel/ defamation. Our web host informed we needed produce documented evidence from the courthouse to produce.

Sometime later, on 10/17/15 David Simon emailed us the documents in question. Due to the propaganda currently being published by individuals like John Miller or Mike Vandeman, I felt compelled to update and republish this post with the court document. See item 5(a). 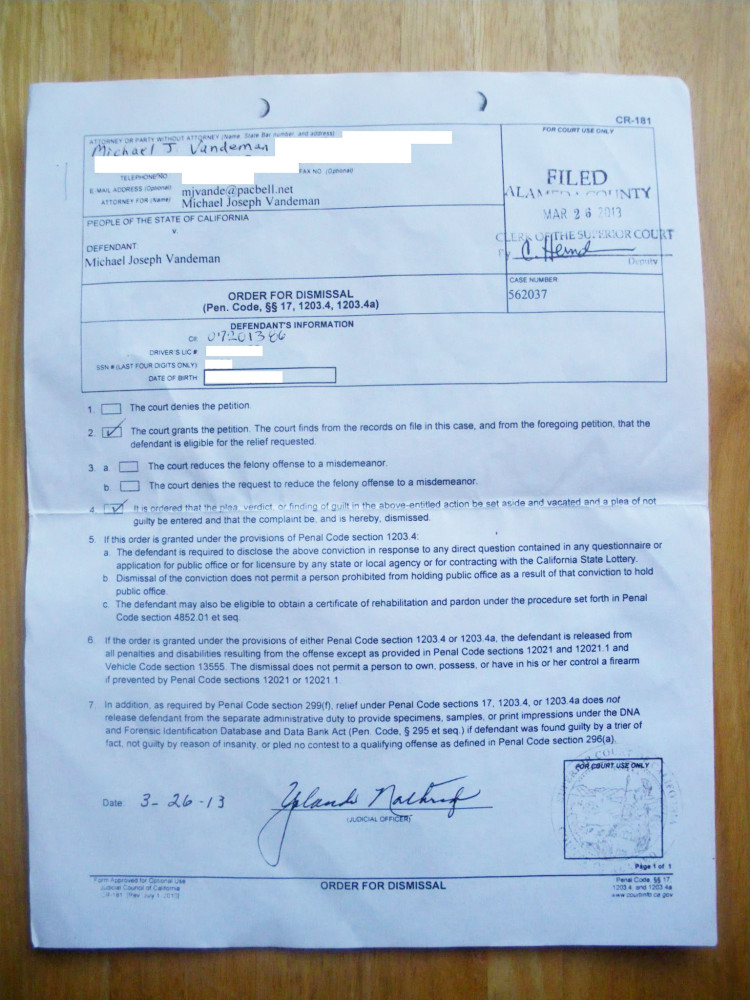 Mike Vandeman is a name that floats around mountain bike circles with a hint of distaste. A long-standing anti-mountain bike crusader, Vandeman has apparently made it his life’s mission to oppose mountain bike access to single track in the Bay Area and beyond. Although he is anti-car and utilizes a bicycle for transportation, he makes it clear that he feels that the mountain biking user group should be restricted from enjoying the single track trail experience.

People with similar viewpoints holding management positions in East Bay Parks are the reason that Bay Area riders seeking the mountain bike recreation opportunities are forced to drive upwards of an hour to ride single track trail— a bitter irony when there are miles and miles of off-limits to bikes single track just minutes away from mountain biking residents in the east bay.

It is even more ironic that these individuals refer to themselves as environmentalists, knowing their actions directly result in additional carbon emissions due to requiring motorized travel for recreation.

The question we present to them is this: Is it your desire to limit localized recreational opportunities, and require mountain bikers to drive their cars thousands of miles daily to ride bicycles in the context of the desired user experience? People that are simply seeking an escape from the stress of daily life are burning fuel and utilizing natural resources when many could simply pedal from their home to local parks and green spaces – public land that should be managed for all users whose taxes support these uses a few short miles away. Let’s be straight on this: your logic and arguments are horribly flawed.

(I realize that I don’t speak for all mountain bikers, but I hate that I am forced to drive my AWD vehicle regularly to ride my bike and get the trails experience I crave. Inga and I both utilize public transportation and our bicycles as much as possible, and the primary use for our vehicle is for driving to trails. Obviously, access to mountain bikes is an emotional issue for both sides, and multi-use trails, while generally a good practice, may not be the solution everywhere here in the Bay Area)

The reality of the situation in the Bay Area has cultivated a culture of disobedience that has grown to include two generations of mountain bikers. Not all mountain bikes are willing or able to drive this trek to ride their bikes. On the dozens of mountain bike forums and websites, there is a “don’t ask/ don’t tell” policy with illegal trail riding. Even notable local mountain bike advocates, when asked off-record, will admit to knowledge of illegal trails. It is the bitter reality of an administration that refuses to address the needs of a major user group.

This fight for access to single track made news headlines again recently when Vandeman allegedly attacked two riders with a handsaw. Peter Frick-Wright, a writer from Portland, is currently in Oakland covering the trial and contacted us with an update on the proceedings:

I’m headed to Oakland this weekend to attend and cover Mike Vandeman’s criminal trial. Surely you know Mike and that whole story, but if not, Vandeman is an anti mountain bike advocate long known for his online screeds against off-road biking.

Then, in May of last year, on a trail near the UC Berkeley campus, he allegedly attacked two riders with a handsaw.

I’m working on a magazine story about Vandeman, but I’m also doing some online coverage of the trial, basically just transcribing my notebook into complete sentences at the end of each day in court. Two weeks ago, the proceedings were called a mistrial after two witnesses, but things restart this week with testimony on Tuesday.

You can follow the coverage at Peter’s website. (www.peterfrickwright.com/trial) Peter’s coverage is extensive, and while he is planning to condense it for submission to the mags, I’m finding the backstory and his personal experience fascinating.

A few details of the trial and the case I’m finding personally interesting:

While it is unclear what the effect this trial will have on bike access in the Bay Area, at least the attention it draws to this issue is a positive note. And I’ll be unlikely to get attacked with a saw if I ever take a wrong turn in the woods.