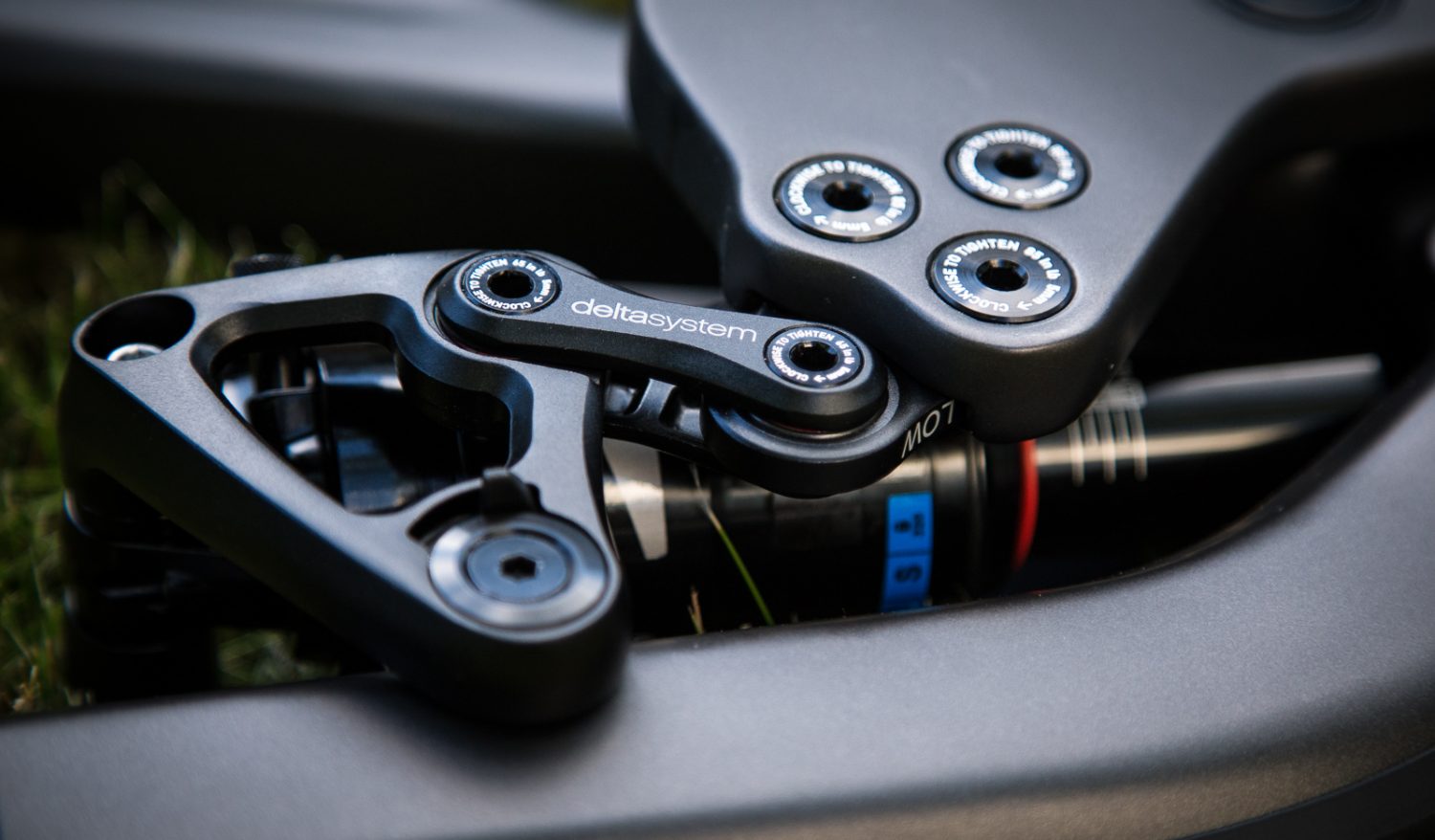 Evil’s Delta system looks complex, but places the weight low in the frame.

The synopsis: when it comes to 29″ wheels, I’ll admit to being a bit of a hater in the past. However, I’ve found the recent crop of big wheels and tires to be significantly more fun than previously anticipated. Going all in on the big wheels, I decided it was time to build one up for myself, with the goal of putting together the most fun riding trail bike possible.

Will I sell it in a few months and run back to my “fun-size” or “squid-size” wheels? Or will I join the chorus of those singing praises of “roll-over” and traction?

As a certifiable gearhead, I’m on a continual quest for that “one” bike — the bike that “descends like a DH and climbs like an XC bike”. And while I’m able to justify having more than one mountain bike, I still want a short travel trail bike that’s as fun and playful to ride as my all mountain bike for all day excursions.

Which is why my trail bikes have utilized 27.5″ for the last few seasons. The 29ers we’ve ridden were efficient and got the job done, but weren’t versatile enough or didn’t quite hit the mark for us in terms of our desired riding experience.

I had a chance to throw a leg over Evil’s The Following recently, and it was clear this was a different beast. While I’ve read the glowing reviews and have been intrigued for some time, until I actually rode one I had remained a skeptic. Featuring 120mm of rear wheel travel and geometry usually reserved for longer travel all mountain rigs, Evil refers to it as the bike with “Monster Truck Wheels with sports car handling.”

It took less than 3 minutes of rolling around the parking lot to convince me I had to acquire a Following. 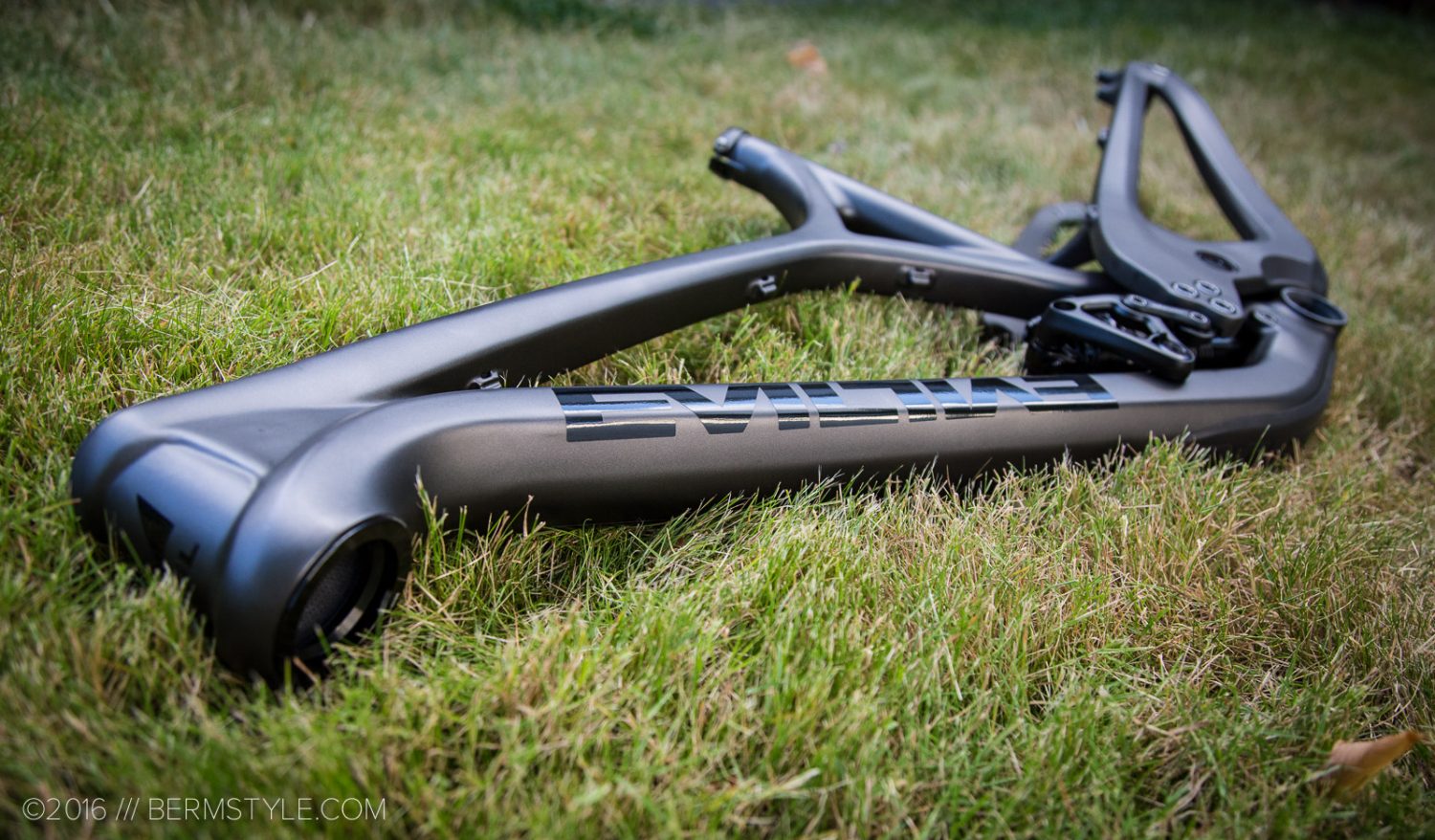 Plastic in the grass

I now had an aesthetically pleasing compilation of plastic and resin staring at me from the couch, and some decisions to make in regards to what parts to source for the build. Here’s what I assembled:

The best part of a frame-up build is the opportunity to play product manager. My goal: assemble a complete bike that would perform without compromise, while maximizing value and not breaking the bank. 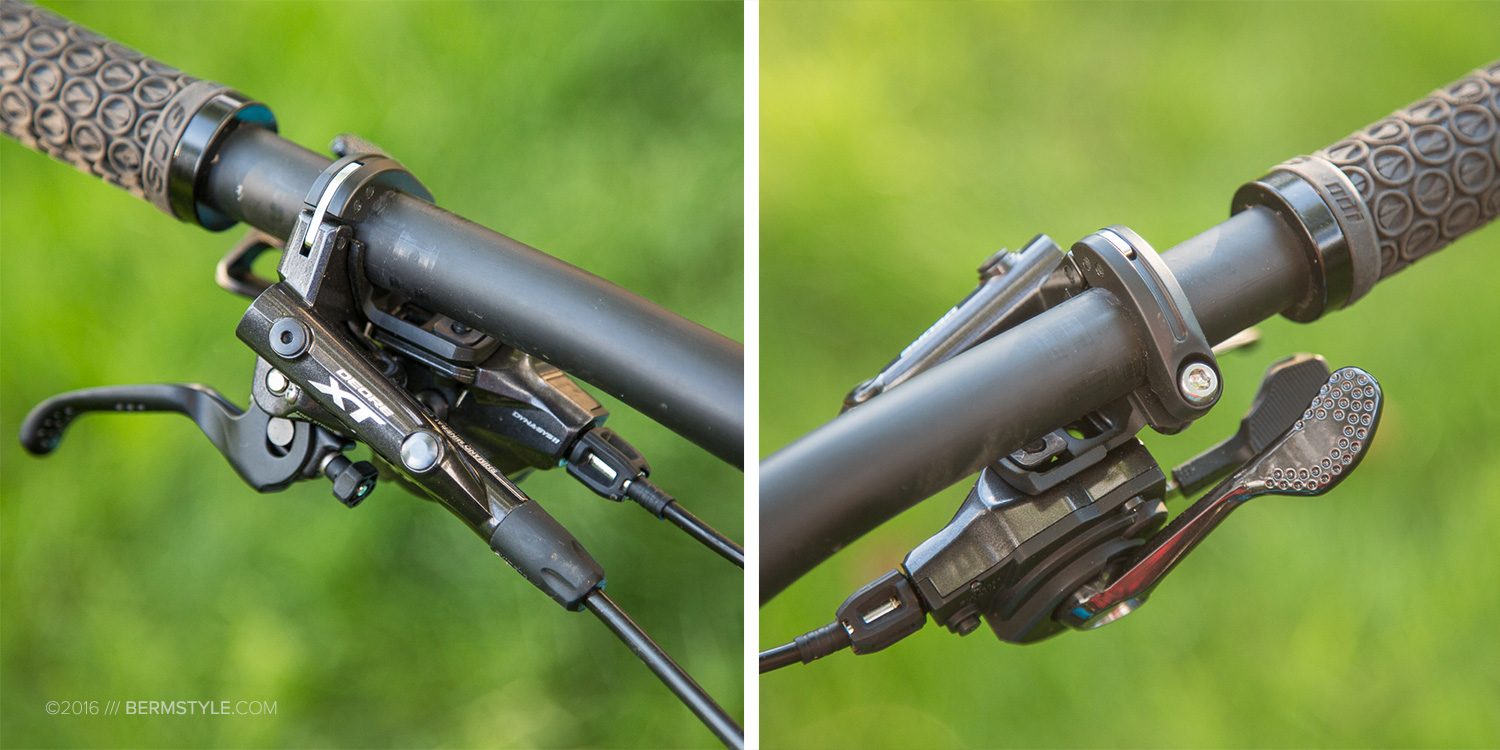 The new Shimano levers and brakes are now integrated into one bar clamp called I-Spec.

When it comes to brakes and drive train components, we’re biased towards Shimano. Full disclosure – we receive support in the way of product for our activities as mountain bike coaches with Bikeskills.com. That said, I can run whatever I want on my non-coaching bikes, and my go-to for years now has been Shimano XT. I’ve had nothing but positive experiences with the components. Interestingly enough, I rarely if ever, spring for the top level pieces preferring XT over XTR, with the exception being the shift unit.

If I was really penny pinching, I’d swap out cranks and possibly brake levers for SLX units. For this build I sourced a full 11 speed XT M8000 component group in the 1x configuration. 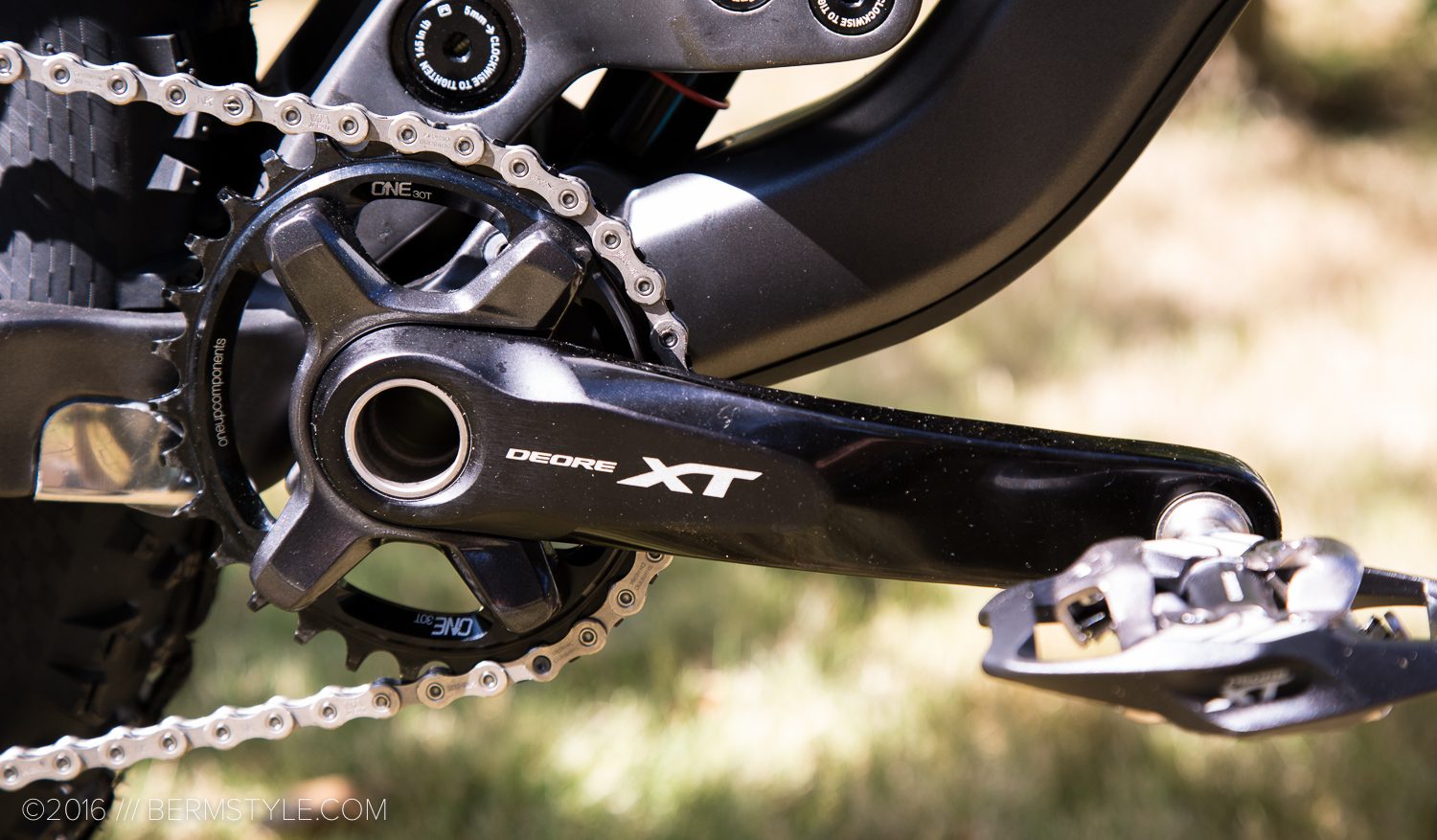 We’ve been riding with this group on a number of bikes and the stuff just works, and works well. My favorite part of the newest iteration of XT though is they’ve finally added the dimpled texture on the shift paddles and brake levers previously limited to XTR.

This is also my first personal bike with the iSpec mounts, and I’m digging the clean look on the bars. 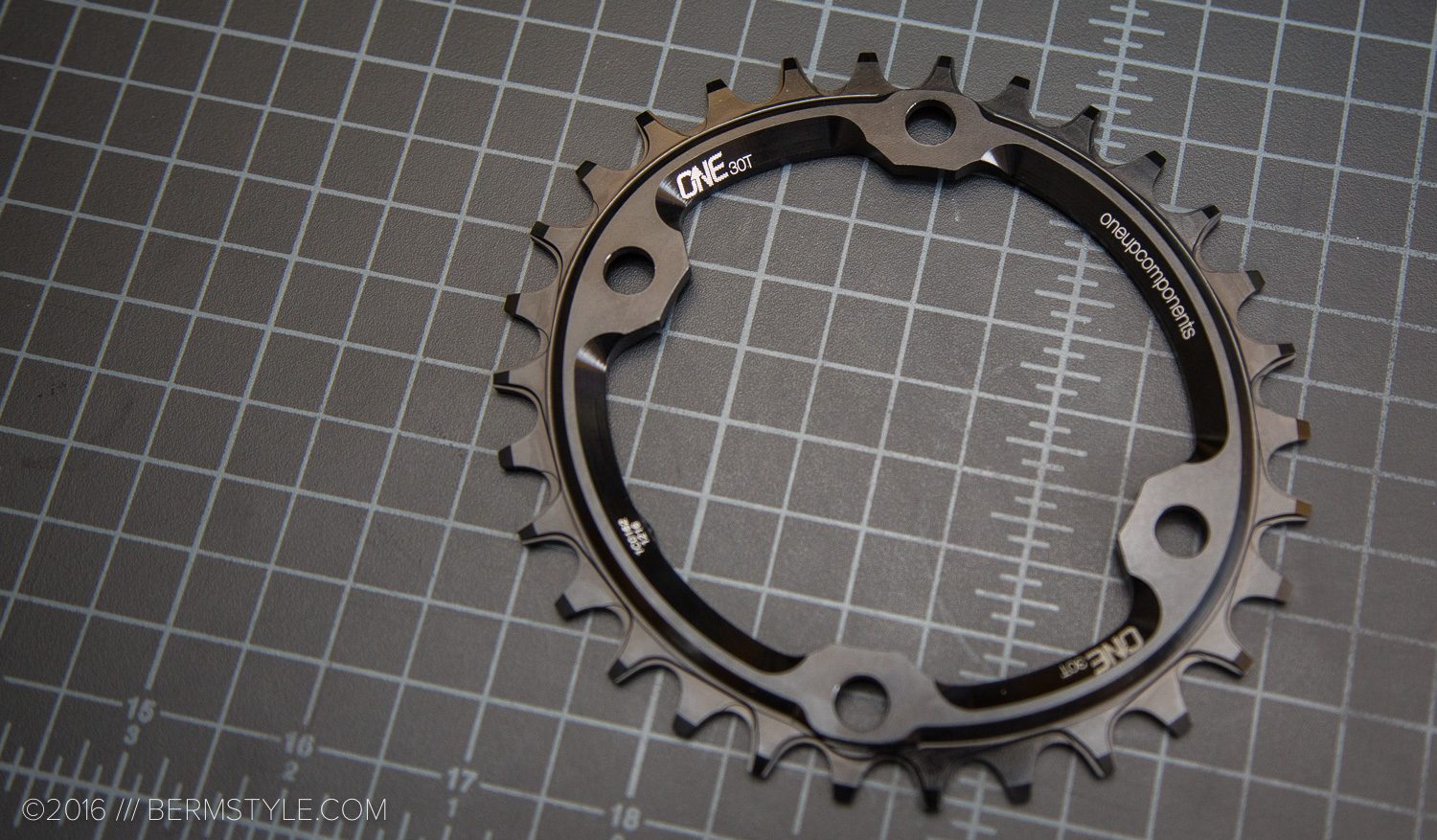 I swapped the Shimano 32T ring on the XT cranks for a oval 30T ring from OneUp Components for a range better suited for local trails. I reviewed a 32T OneUp Oval ring in a previous post, and was very pleased with its performance.

The OneUp XT M8000 Traction chainring 30T features 12% ovality which makes it feel like a 28-32T ring, and features a Narrow Wide tooth profile to minimize chain drop. I also sourced a OneUp ISCG05 Chain Guide for when the ring wears down.

I’d spent some time riding an Ibis Ripley last year decked out with the wide Ibis 741 carbon hoops, and the amount of traction was amazing. Though the Ripley only had 5″ of travel, I found myself descending at speeds typically reserved for bikes with more travel. 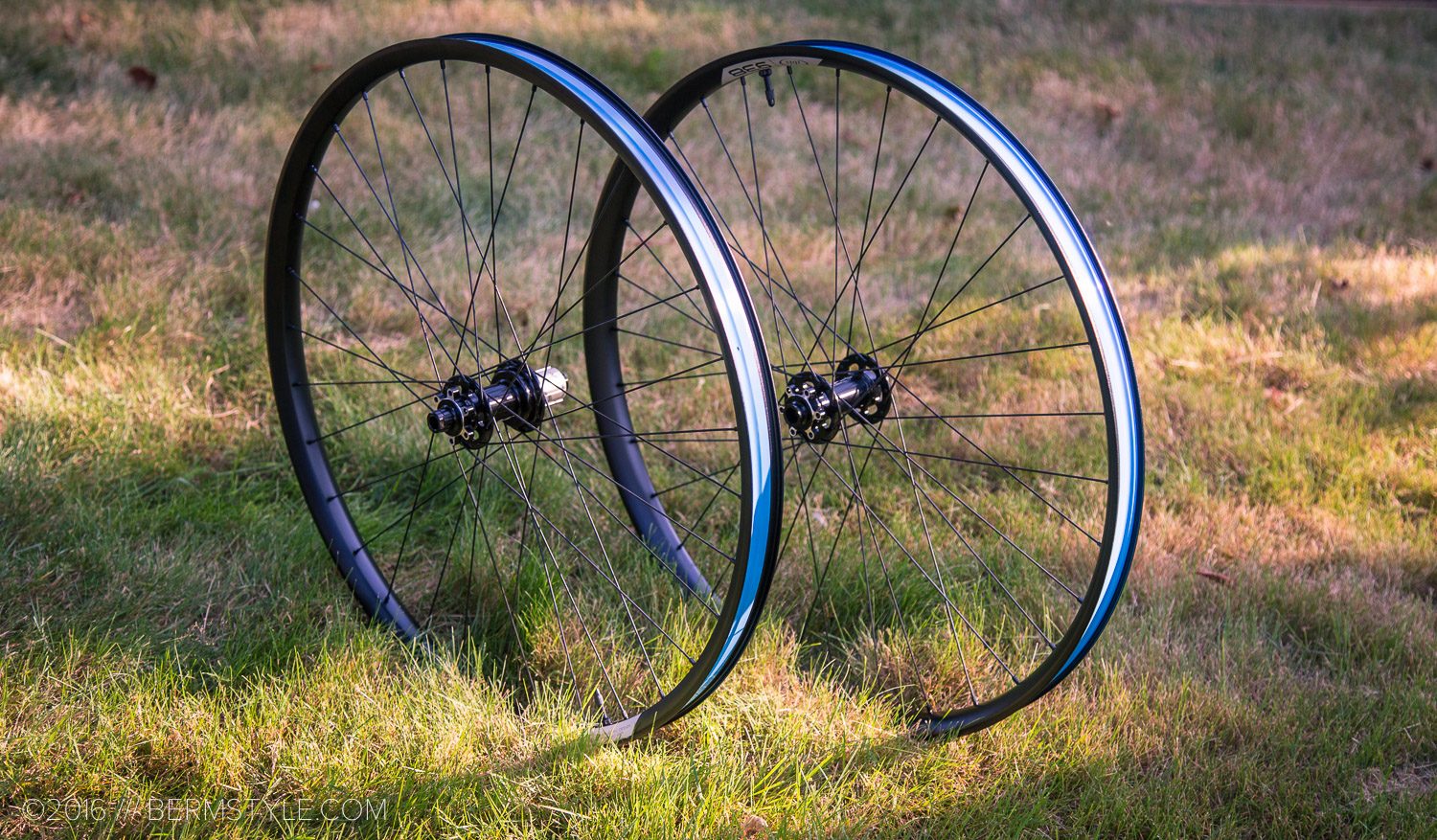 The 938 wheelset from Ibis is their entry level model but packs a ton of bang for the buck.

Ibis recently released 4 new wheelsets in carbon, with 2 models in aluminum. The new 735 carbon comes in at a very reasonable (for carbon) $1799.00, but it was the 938 aluminum wheelset that stood out. At $549.00, the wheels are $100 less than many other wheels in the category, while coming in at a respectable 1935 grams. Ibis also has been doing wide rims for much longer than many of the other labels that are just now releasing wider rims, so they’re still setting the pace. 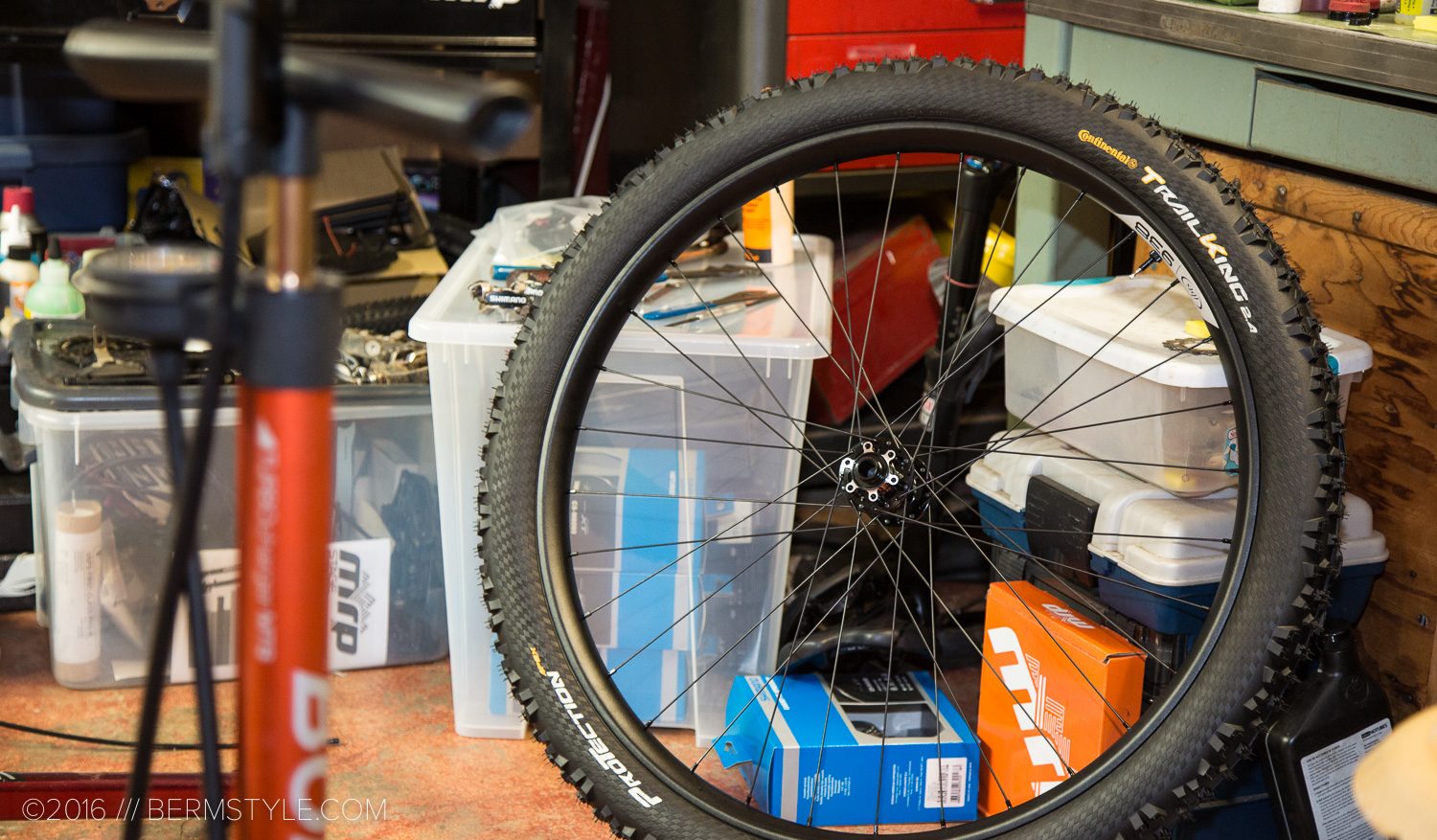 Mounting tires on the Ibis 938 wheels

The Ibis rims are so wide that they’re often mistaken for plus sized, due to the massive tire profile when mounted up. Because the width of the rim alters the shape of the tire so drastically, choosing the right tire is critical. Unfortunately, our favorite go-to tire, the Maxxis Minion wasn’t available at the time, so I decided to try the Continental Trail King 2.4″. 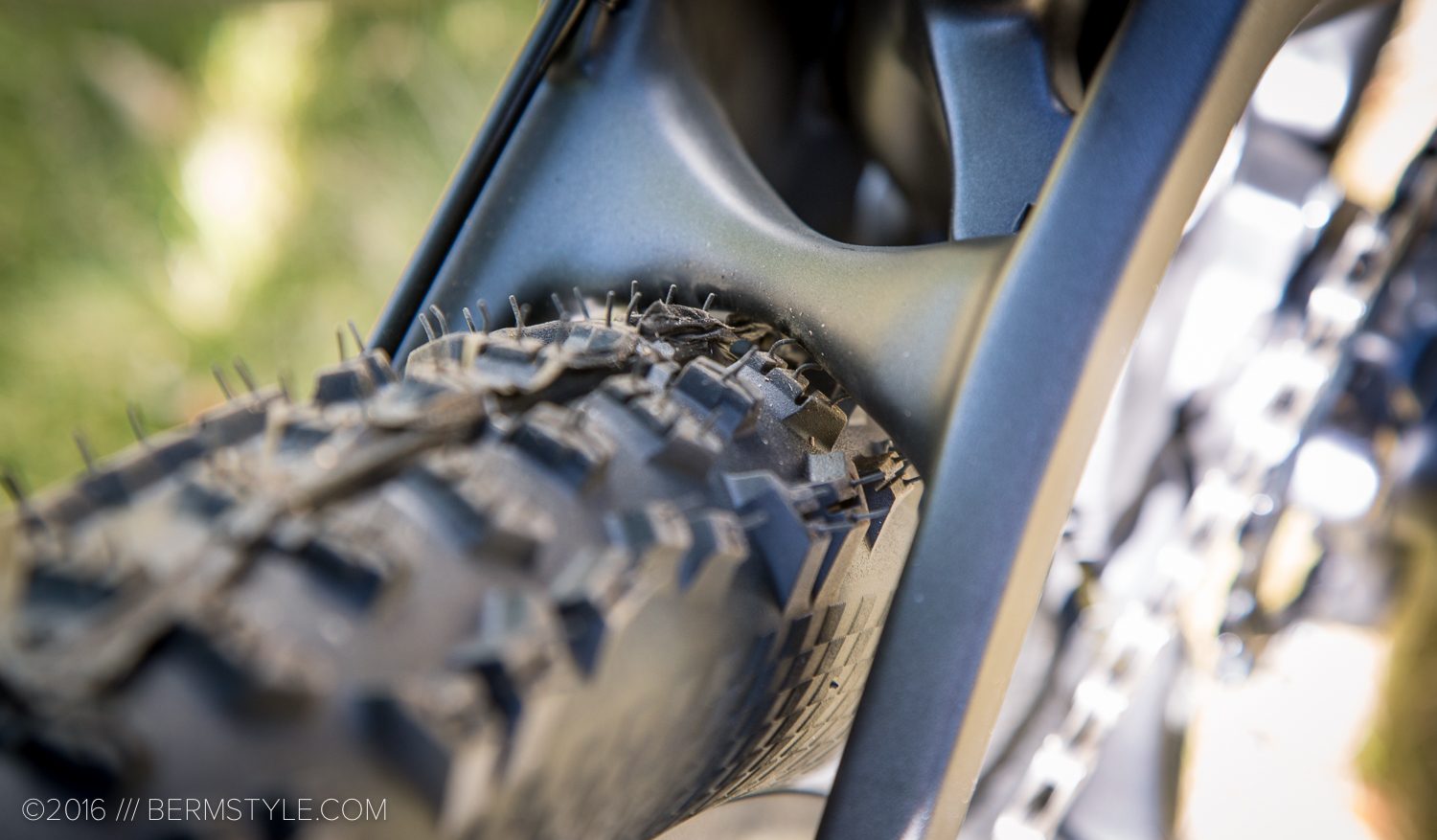 Mounting the Trail King Tires on the 938s went smoothly. I wasn’t sure how it would go with the wider rims but they sealed first try using our Bontrager high volume floor pump. It wasn’t until I mounted them on the Evil that I got my wake-up call. The 2.4″ casing was huge when combined with the 34mm internal width of the Ibis wheels. Huge tires/ wheels and uber short chainstays equaled a no-go, with the tire actually contacting the frame. This was definitely a bummer, and held up the build until I could swap the rear tire for a 2.2″, which clears. 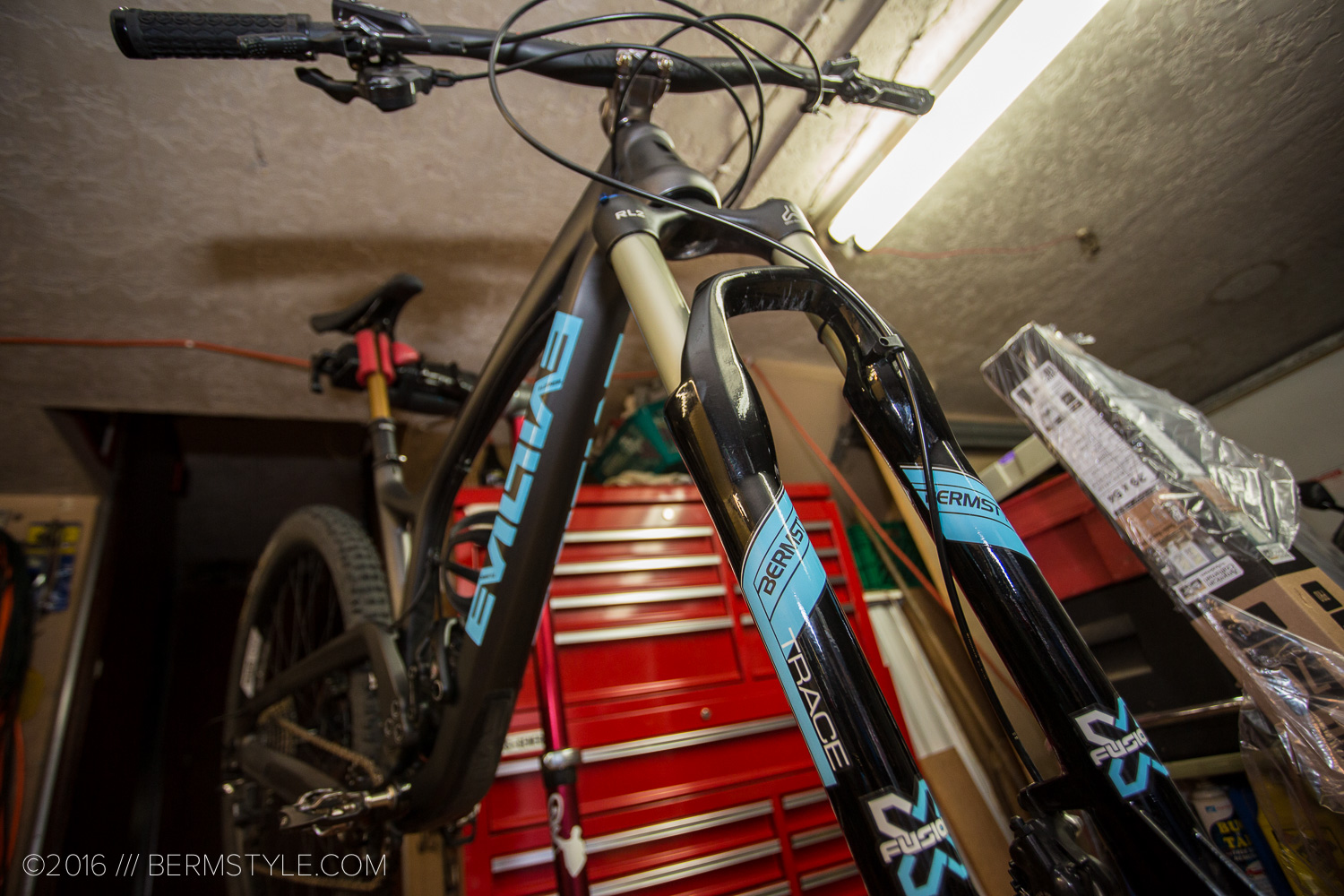 The Rockshox Pike has been the gold standard for aggressive trail bikes, but having reviewed X-Fusion’s Sweep RL2, I elected to give X-Fusion another shot. The X-Fusion Trace RL2 is extremely plush and although the damping isn’t as sophisticated as high end Fox or Rockshox models, it has a great feel that rivals them, and is extremely affordable. More importantly, adjusting fork travel is relatively easy. (though you do have to pull the lower legs and disassemble the fork) 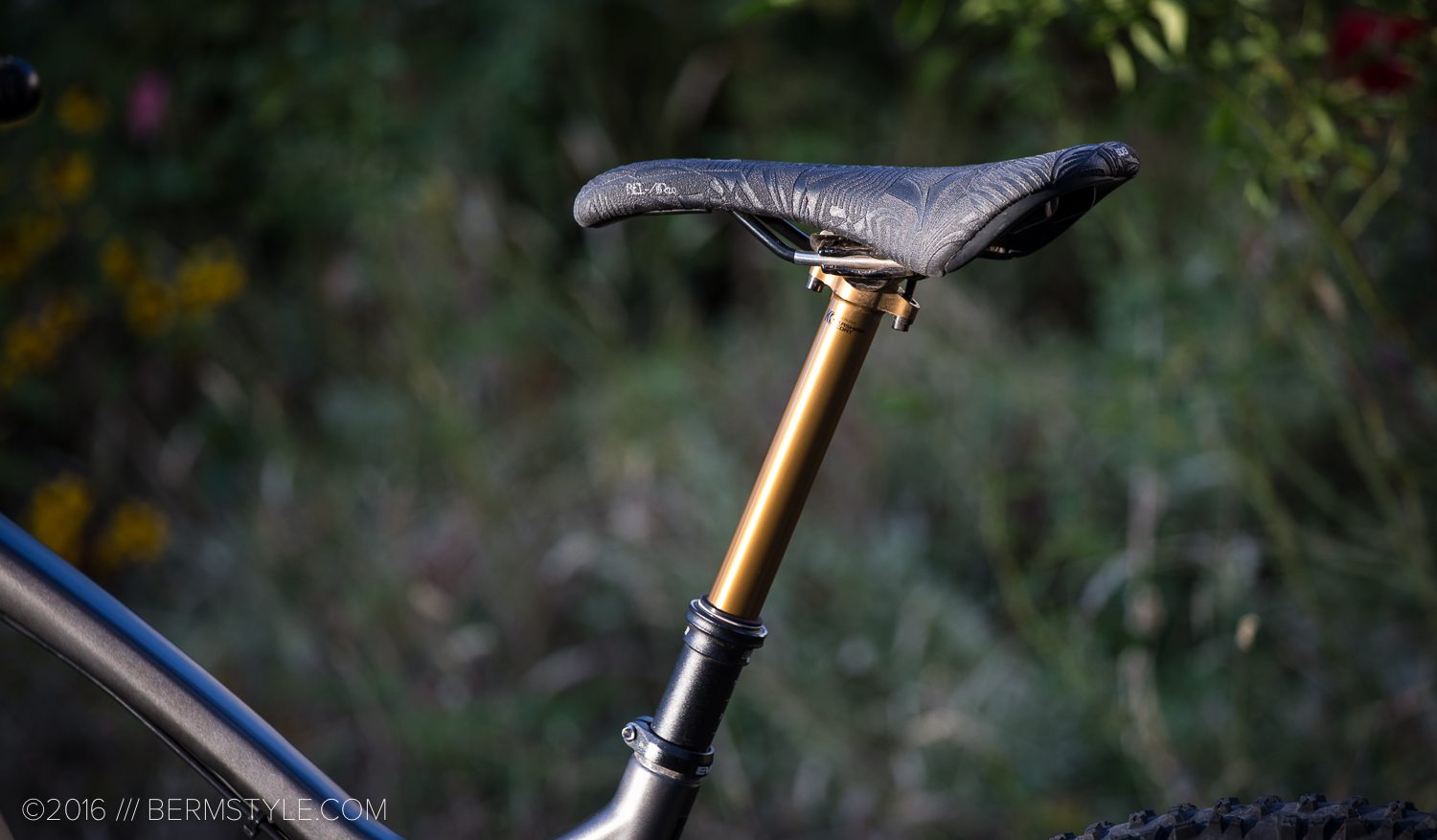 The final piece of the puzzle was the dropper post. It seems like every major brand has released a new dropper post in the last few weeks. However, the one that stood out among them all was the Fox Transfer. The new model from Fox is hydraulic, infinite adjust with the choice of internal or external cable routing. Fox’s first generation seat post is known for reliability in a product category known for having problems. The Transfer improves on everything you’d hope from the D.O.S.S., and if it is anywhere near as reliable, Fox has a winner here. 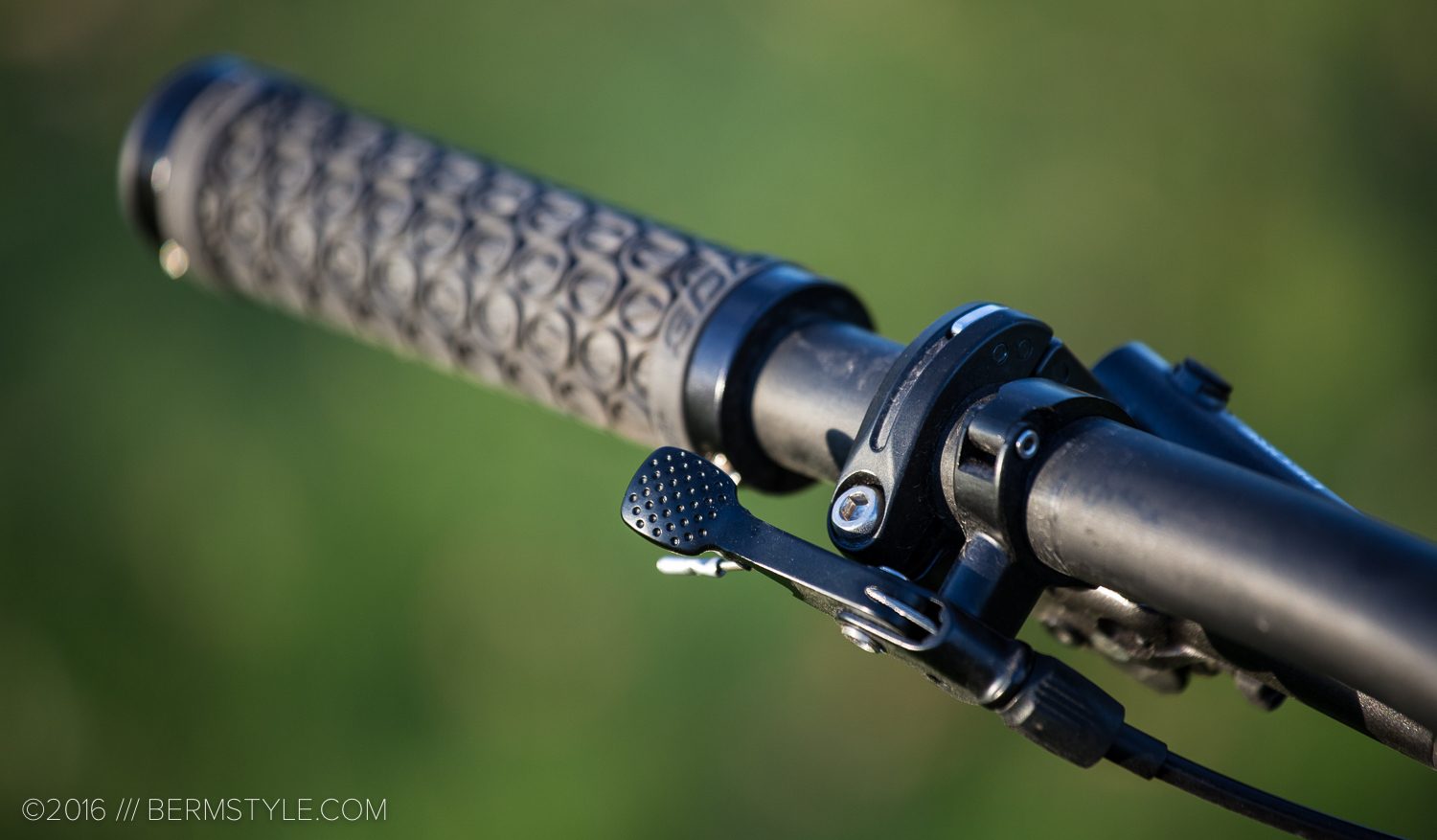 Fox offers two different lever options for the Transfer post so you can select the one you want as opposed to having to buy two. I’ve only spent a short amount of time with the Transfer so far, but I’m totally stoked on how well this thing works; I’ll just say it — it kicks ass. The feel of the lever far surpasses any post I’ve used to date. On top of that, the dimpled lever matches/ pairs well with the M8000 XT shift levers. 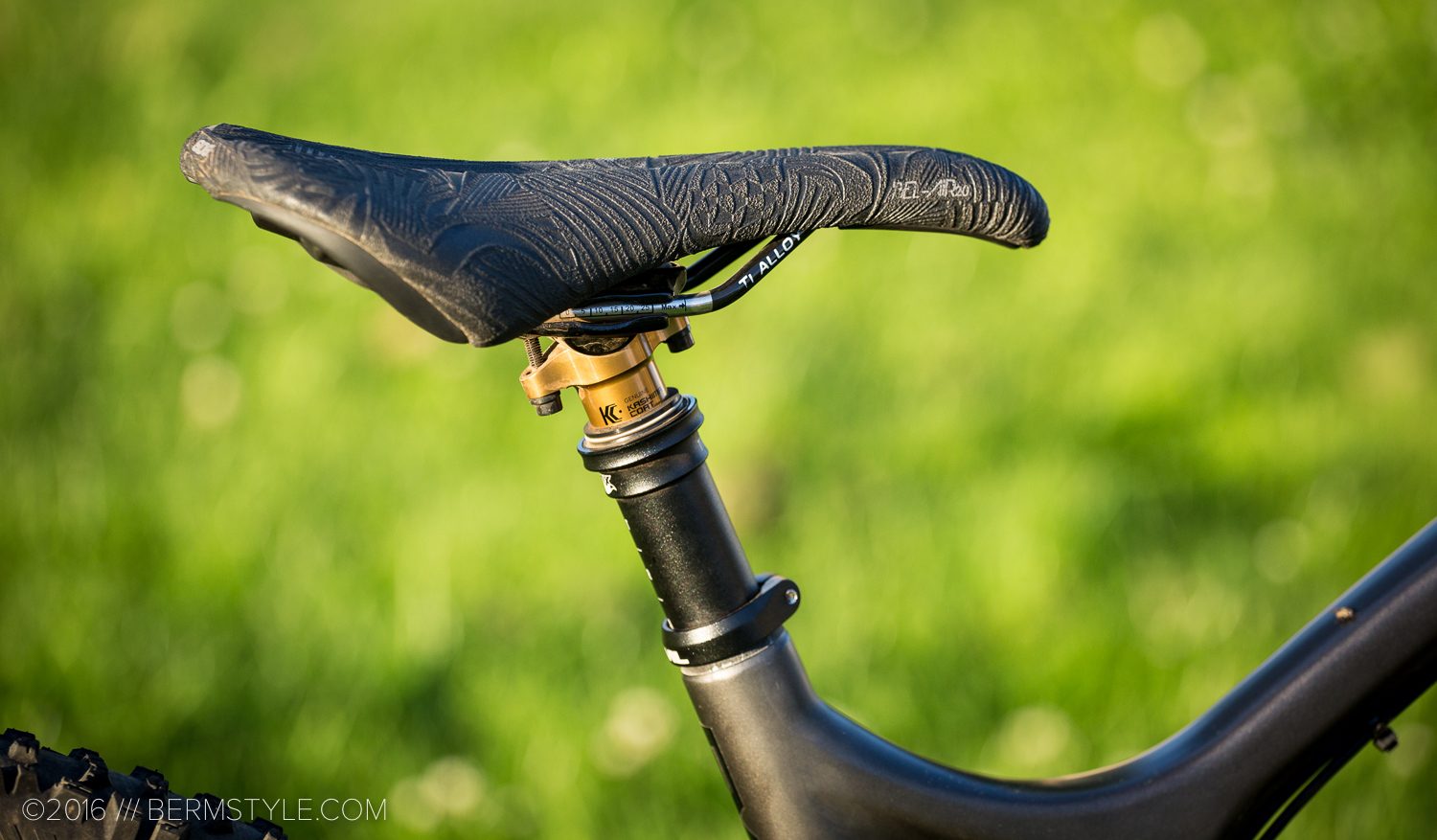 I recently penned a homage to my favorite saddle of all time, the Bel-Air from SDG. It’s been my go-to for years now, and the hardest part was trying to decide between the limited edition blue or the murdered out black model. The ti-alloy model costs over twice what the steel railed model runs, but once you find a saddle you like, choosing ti rails saves almost 100grams. 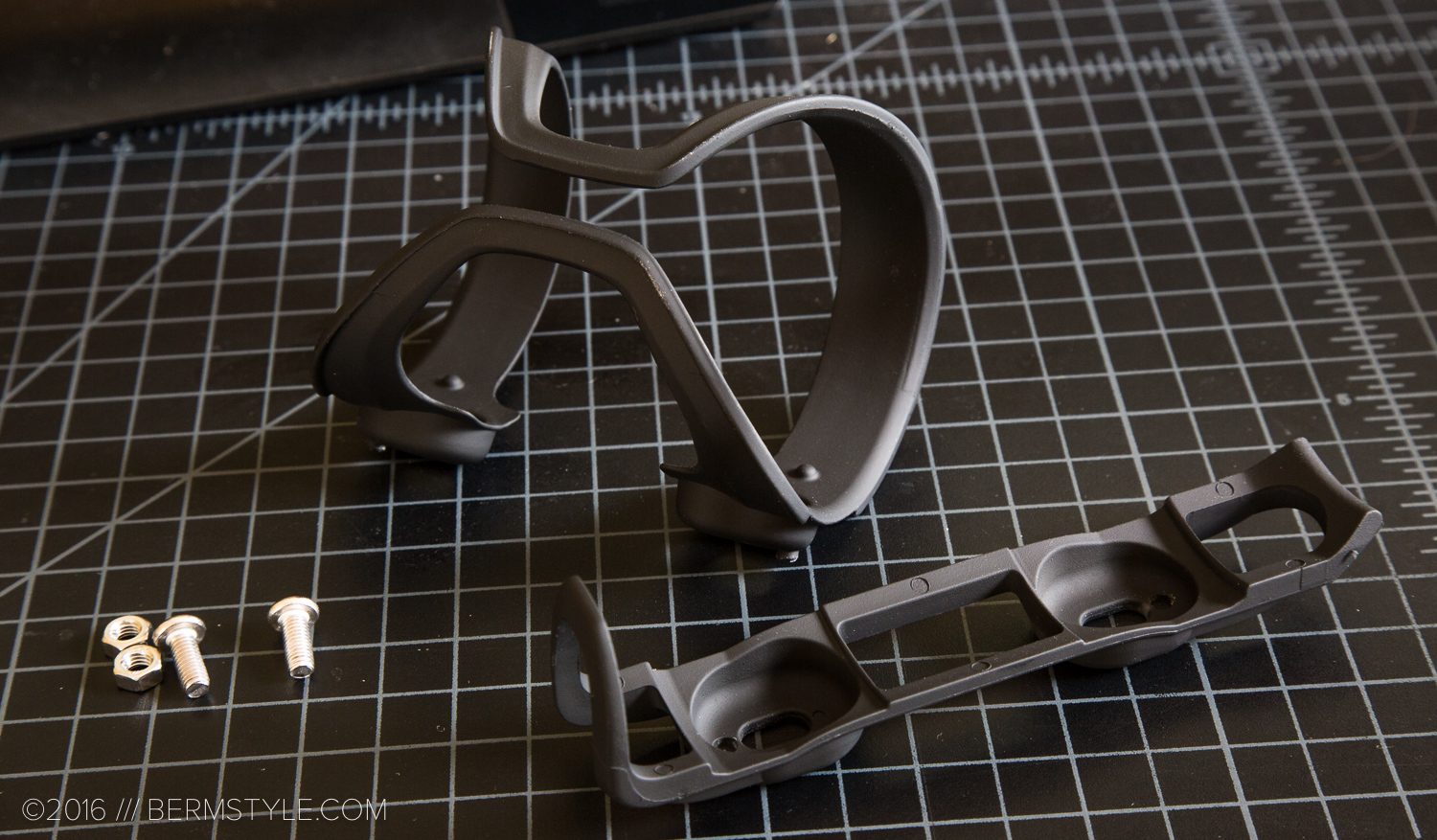 I prefer to leave my pack behind on shorter rides, so a good bottle cage is a necessity. The new Wayside cage from Blackburn can be installed to be left or right handed, and the side entry helps with accessing a water bottle in frames with a tight fit.

If you’re going to go the extra mile and build up your bike from a frame, why would you want it to look like every other bike out there? 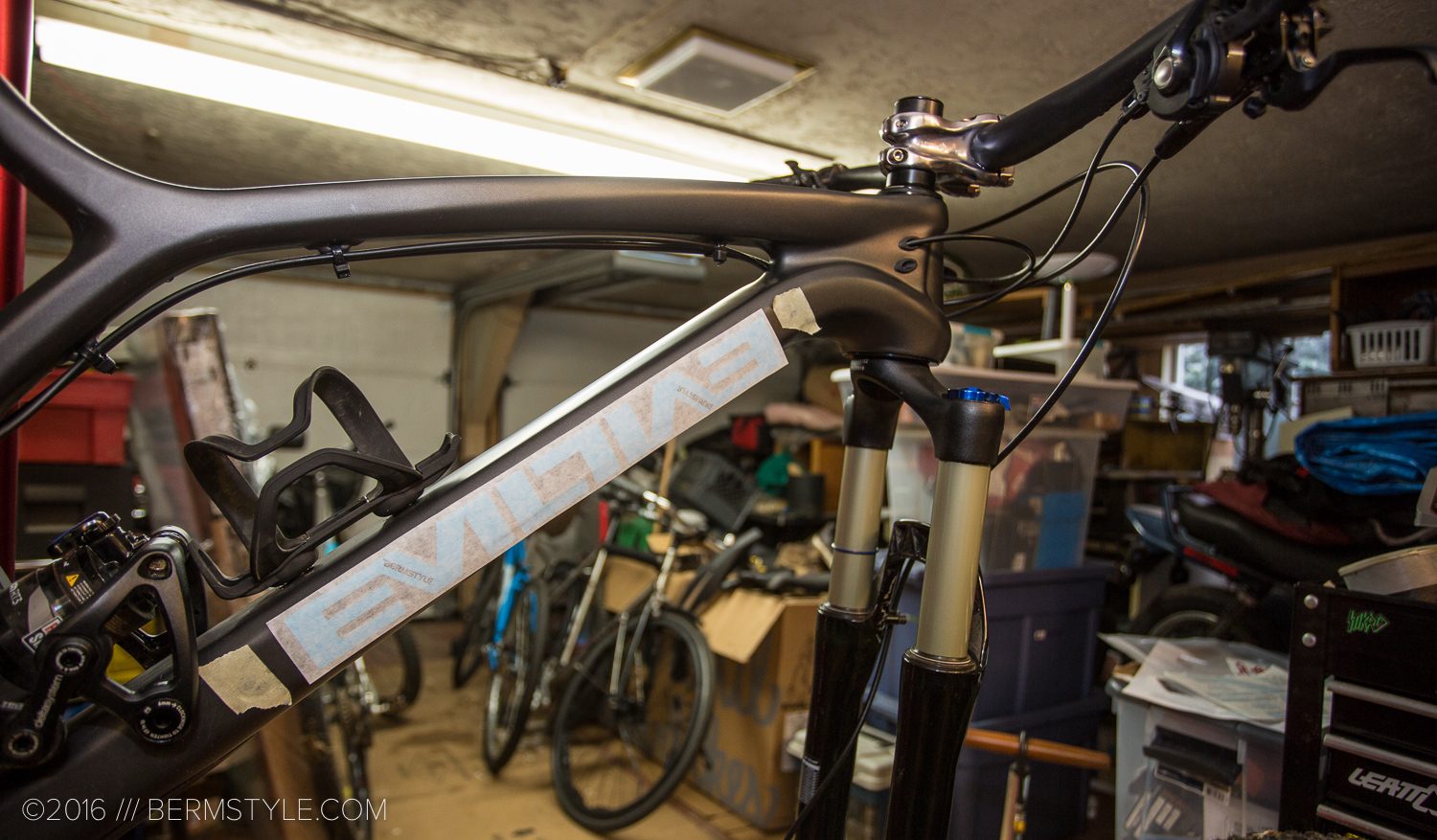 Installing the custom decals from the gang at Stikrd.com

Fortunately, it’s easy to give your bike a custom look thanks to outfits like Stikrd. Our friends at Stikrd created custom decals for the #29erproject build that take it from just another bike build, to something personalized and special. 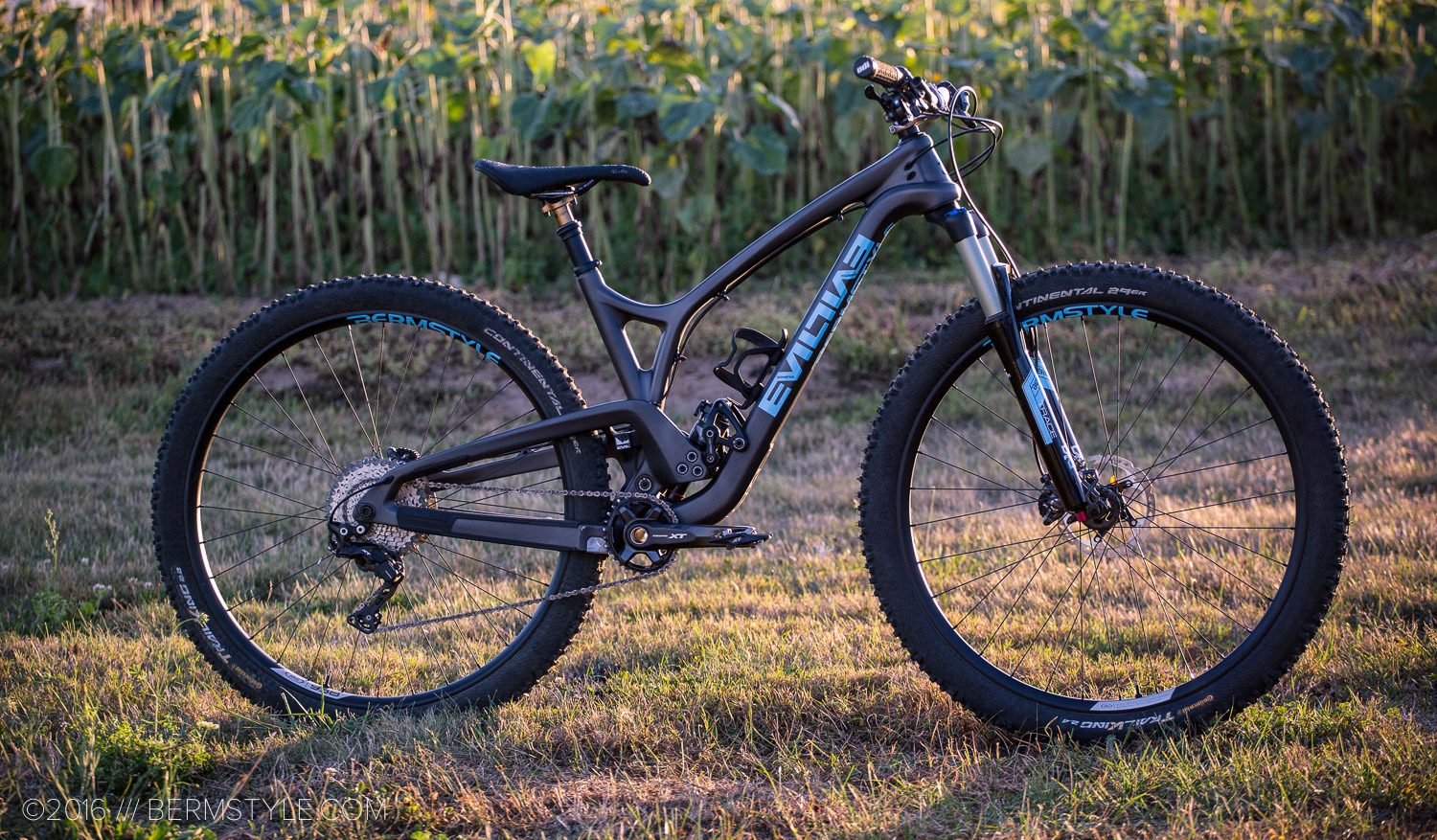 The finished build of the Evil 29er Project.

While the X-Fusion fork is a good option for the money, I was able to source a Fox 34 Kasmina to match the Transfer post. I didn’t mess around this time, and ran it at 140mm of travel. The longer travel fork really ups the descending of the Following, and I found myself riding it as fast and aggressively as my Santa Cruz Nomad— until the trail got super rocky or gnarly and I was shocked back into remembering its only a 120mm travel bike.

I also took this time to try out Shimano’s electric Di2 Drivetrain. 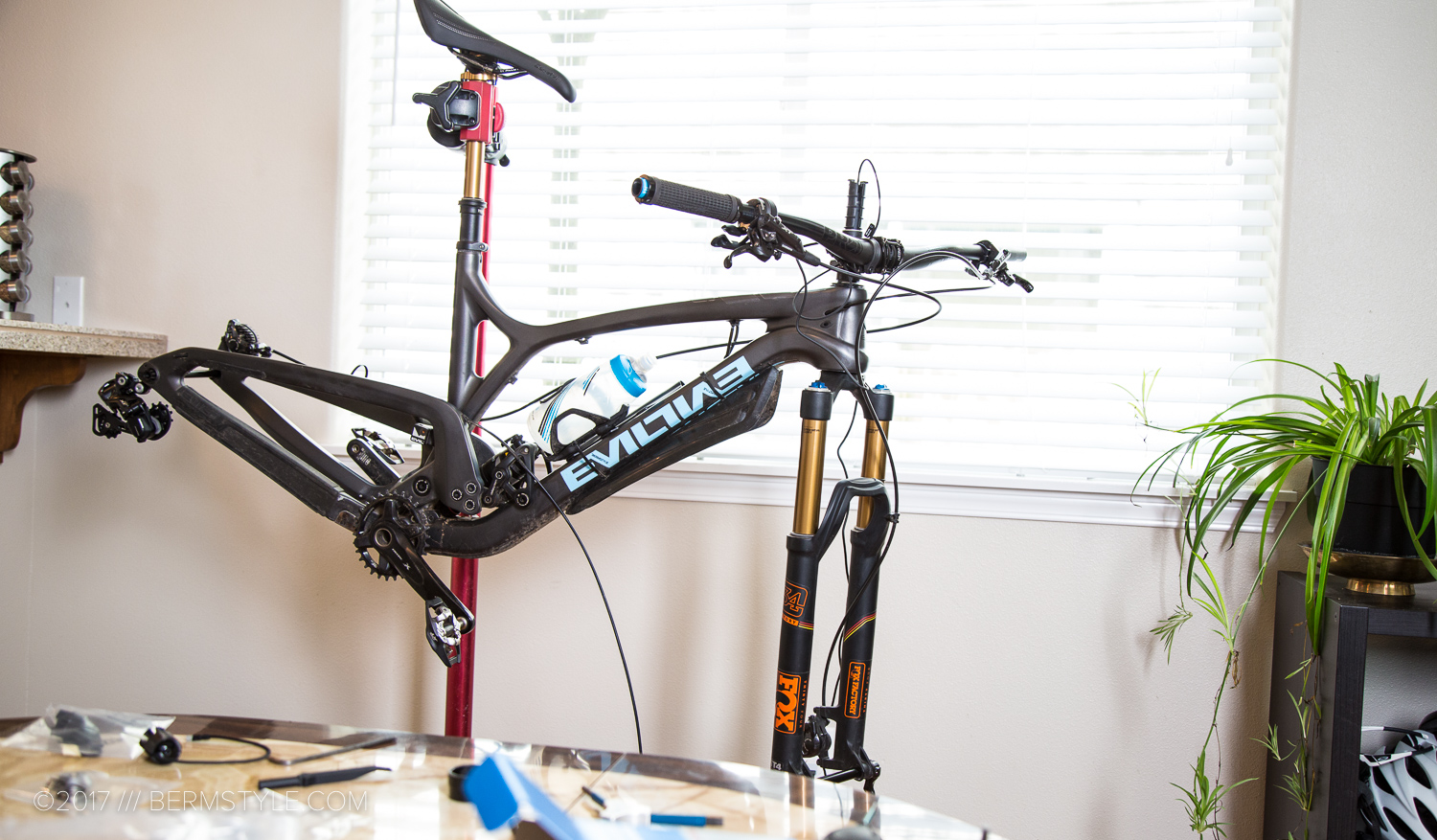 Installing a Fox 34 and Di2 Shifting. The trickest part of Di2 installation is figuring out what length cables to run, and where to hide the battery.

Electronic shifting generally isn’t something I’d seek out; I generally like my bikes as simple as possible. However, living in an area with wet conditions means we’re constantly cleaning bikes and that means changing cables every spring. The promise of Di2 is perfect shifting, regardless of trail conditions. 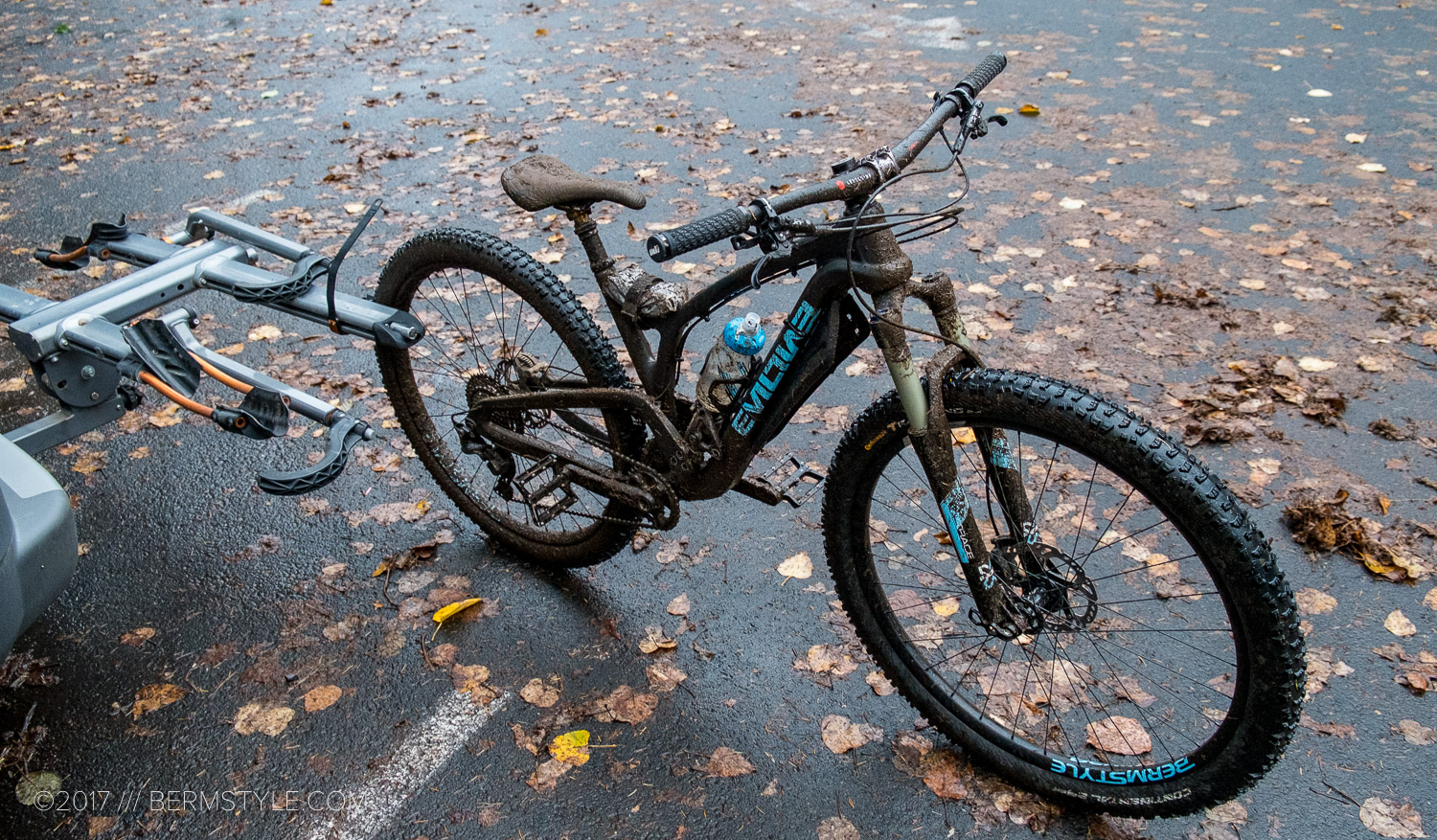 I also started riding more and more with a waist pack, which meant getting my gear spread out and adding some to the bike. I already was running a water bottle, but also added a Fernhill Co frame bag that snuggly fit into the front triangle. Although there isn’t a lot of room, the side load water bottle worked, and the frame bag meant I’d never find my spare tube was ruined before I even had a chance to install it. The frame bags are made by a friend of ours in Portland, and I got an early model to try out. Made in two sizes, (I’m running the small) they work really well, and we’re big fans. 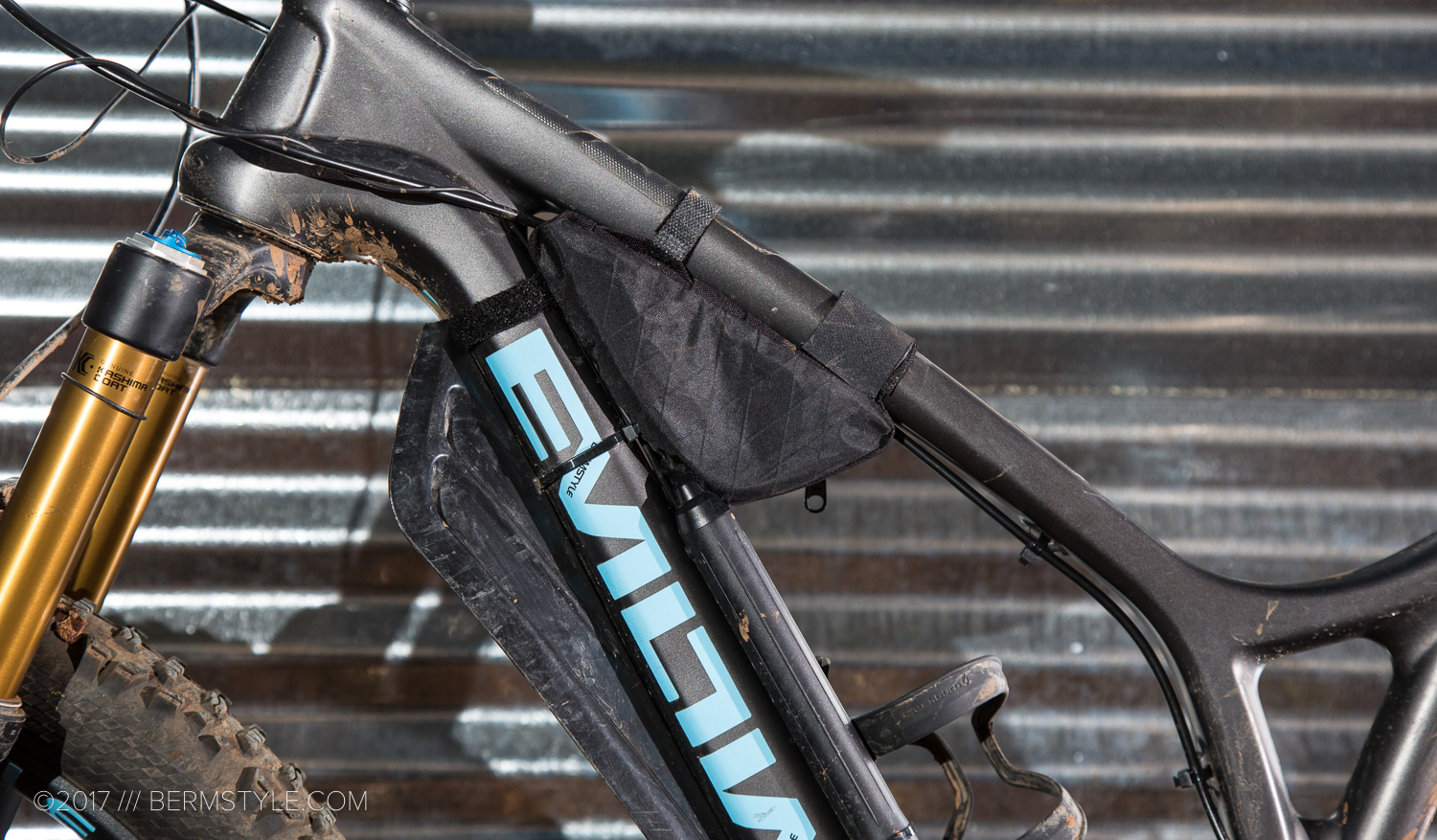 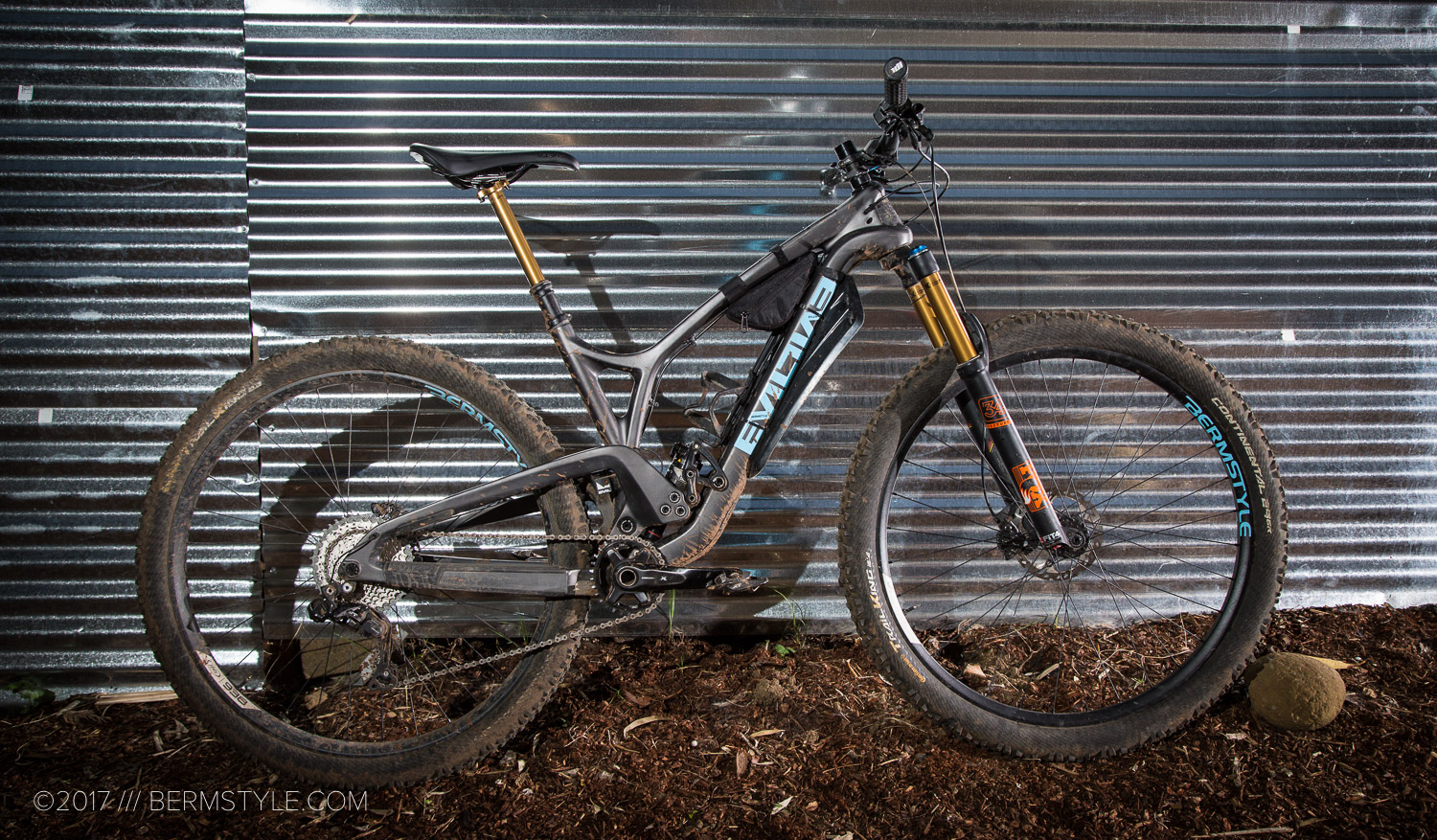 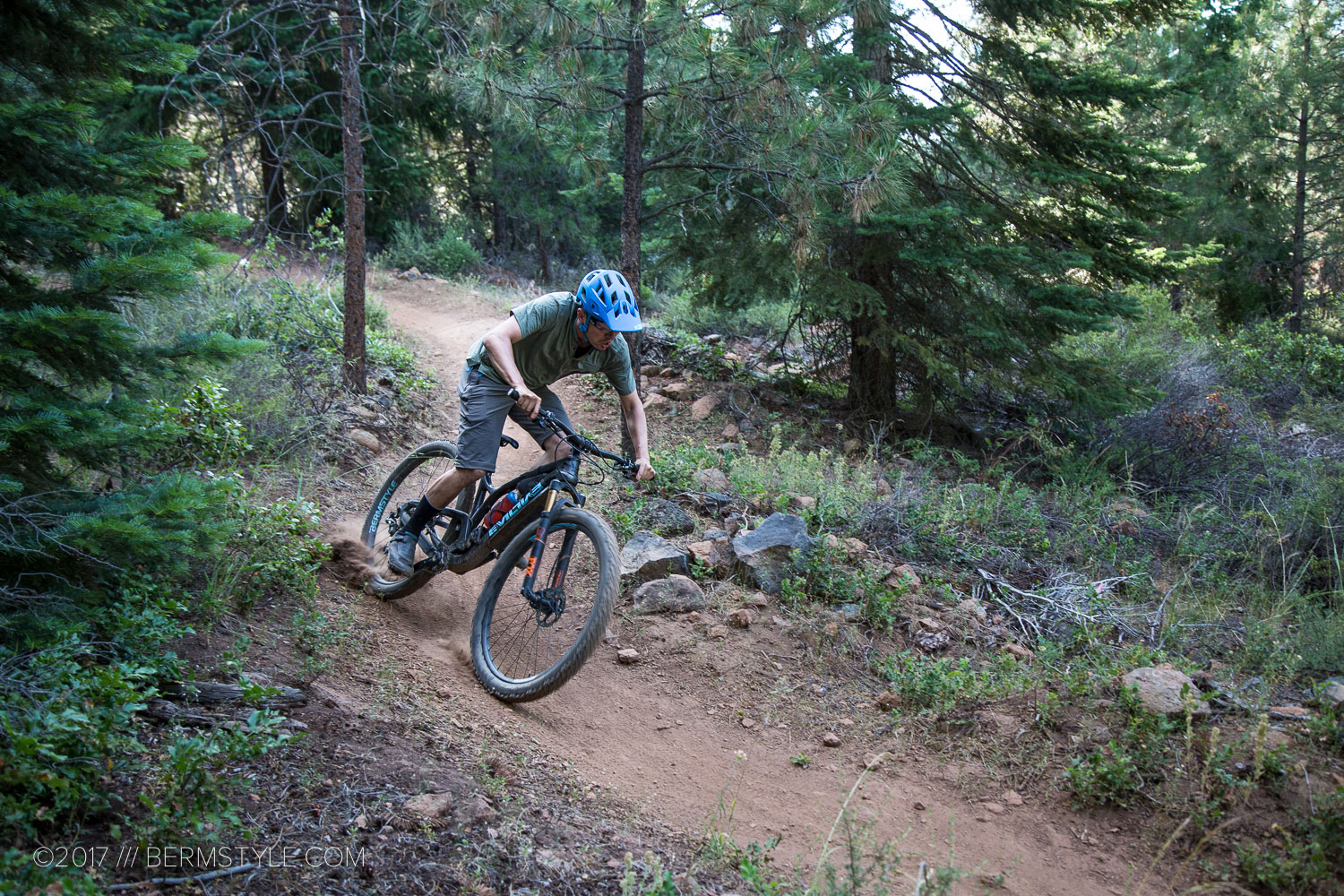