One time, I was riding my bike home from work in Portland, when a tree fell on me. I remember it like it was yesterday.

Actually, it was yesterday. It was a very large tree. 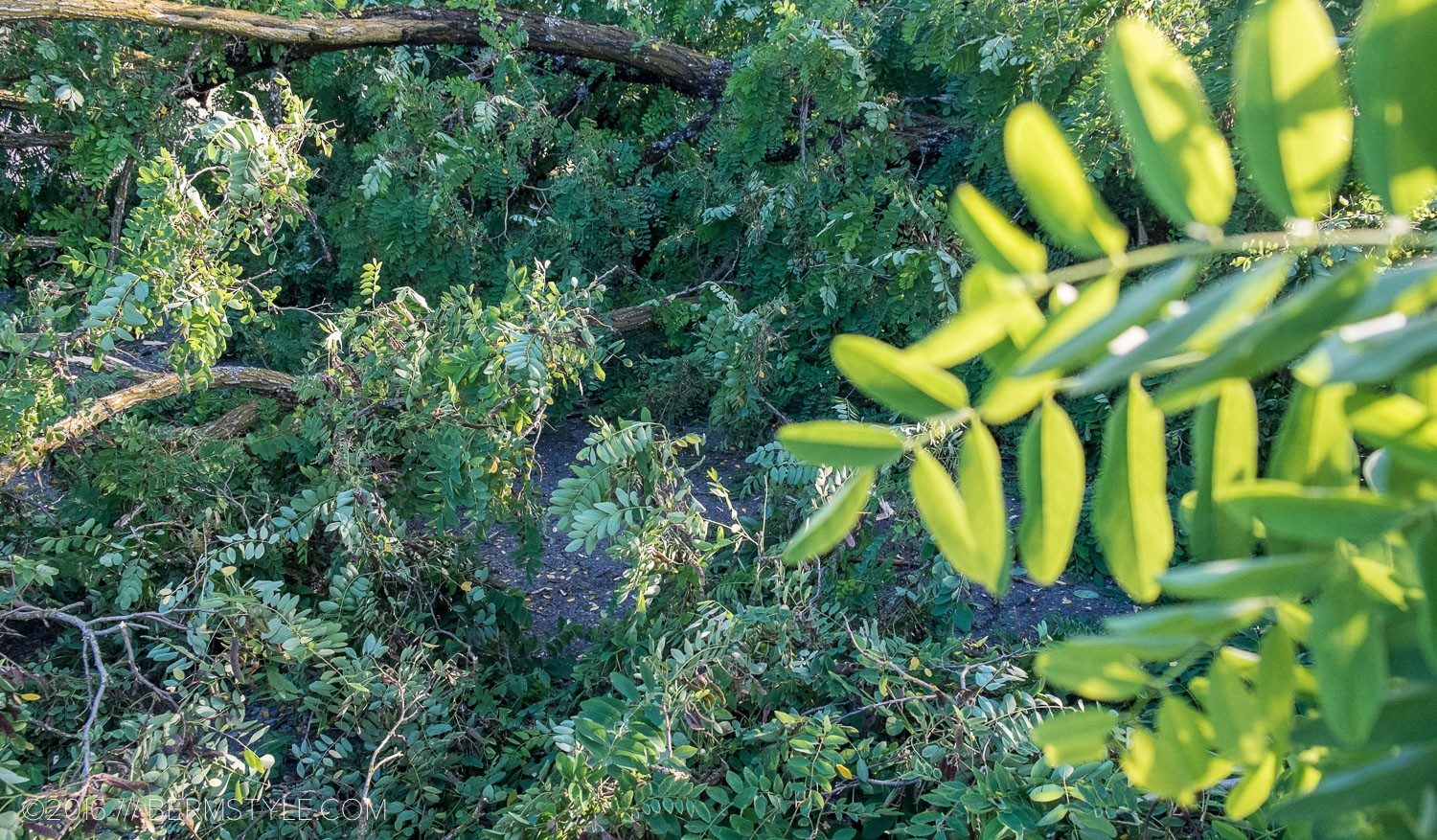 I pulled myself out of this spot after the incident.

It all happened very quickly, though looking back, it was as if it was happening in slow motion. Like the dream where you’re being chased, and now matter how hard you try, you’re unable to move.

I was just pedaling along when I heard the cracking noise. Looking up at the source of the sound, I see movement and in a moment of realization, begin to react. The mass of branches is massive, and knowing I don’t have enough time to clear the fall zone, I swerve to the left, hoping to outrun it and the trunk coming down at me. 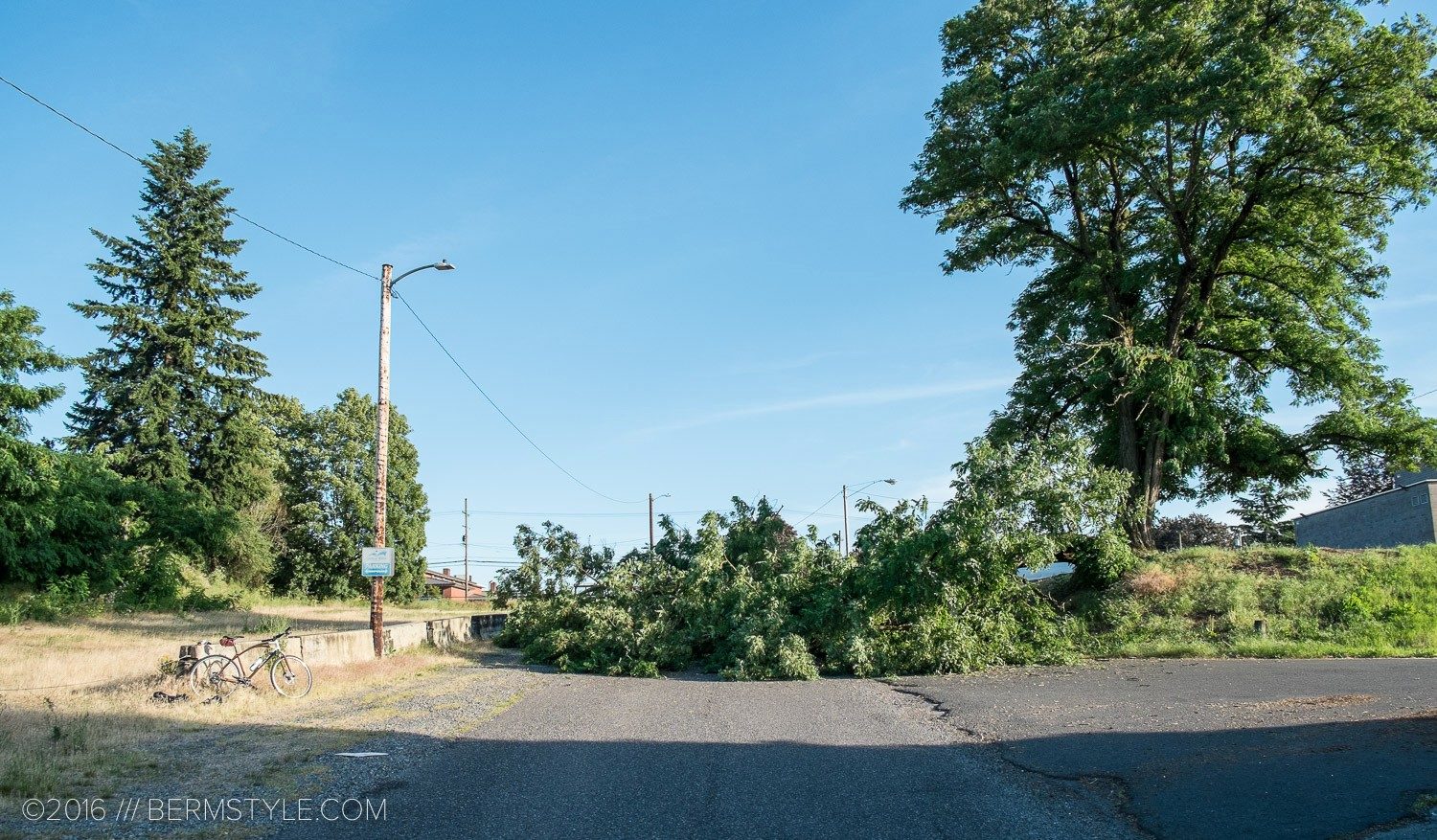 I’m trying to move my legs faster, but the moment feels like its being stretched out.. I’m looking upward. The mass of green is approaching.

“I’m almost there!” But I don’t make it. It comes down upon me, the force of it slapping me to the ground, like a giant hand swatting a fly. I feel it the blow upon the back of my head.

Then I’m on the ground, surrounded by green branches and pavement.

Most intense 3 seconds ever. A huge tree just broke and fell on me on my #commute home. Heard the cracking, looked up and realized I was totally screwed, swerved left and tried to out run it. This is my view from the ground after being knocked off my bike. #closecall

The next thing I remember is the screaming. A girl in the parking lot above watched it happen. I hear something in the screaming something about a guy on a bike being dead. 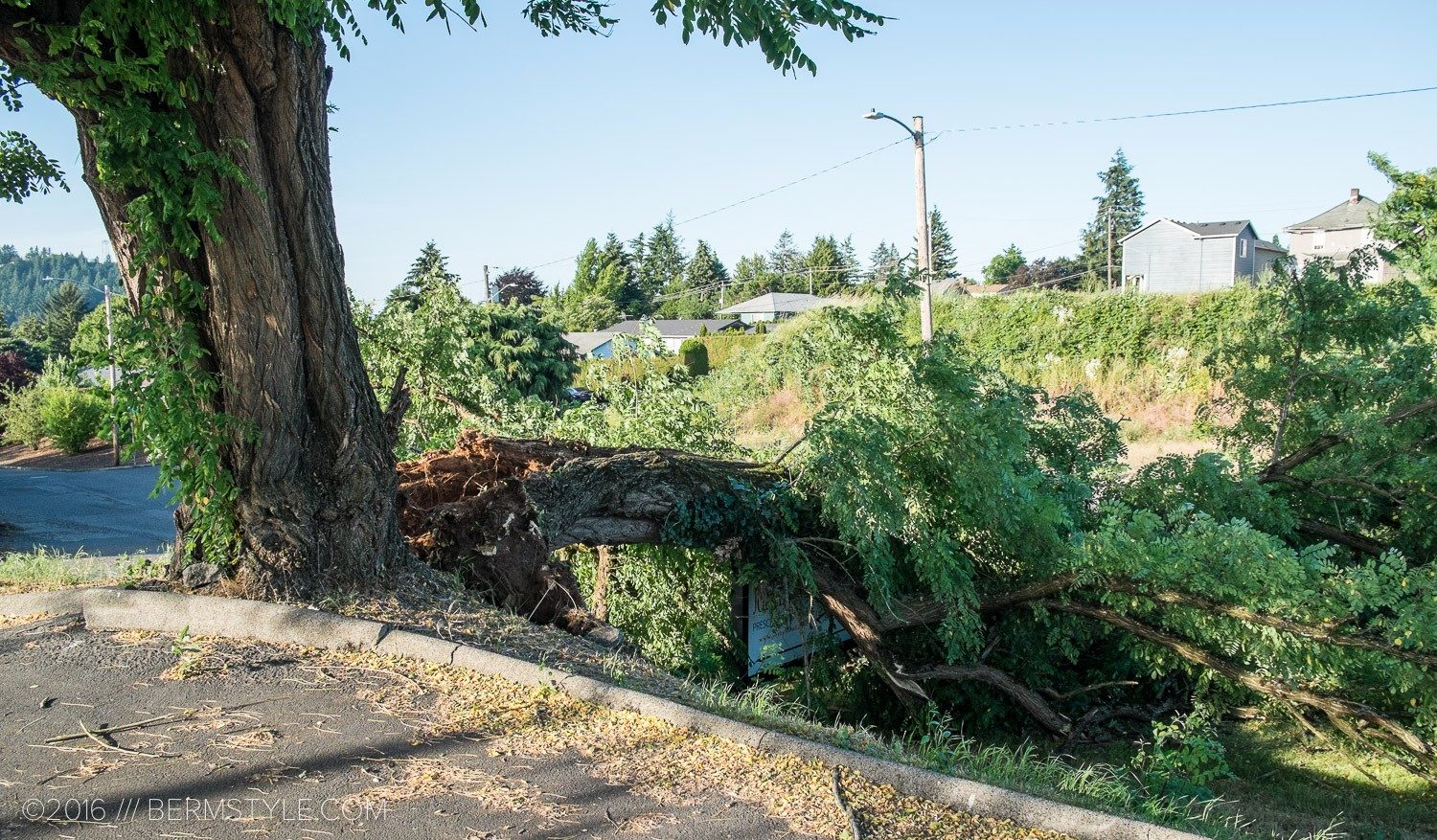 I recall someone was standing about here when the tree fell.

“I’m not dead”, I croak from the ground.

In hindsight, I was doing my best Monty Python and no one even got it. I’m twisted up and still wrapped around my bicycle, slowly attempting to assess the damage.

Hands, feet, both working. Out of reflex, I reach into my pocket, to pull my phone out; my hands are still a bit shakey. I document my point of view from the ground, which I’ll post on Instagram after I manage to recover a bit of composure. Then I begin to crawl out of the carnage. 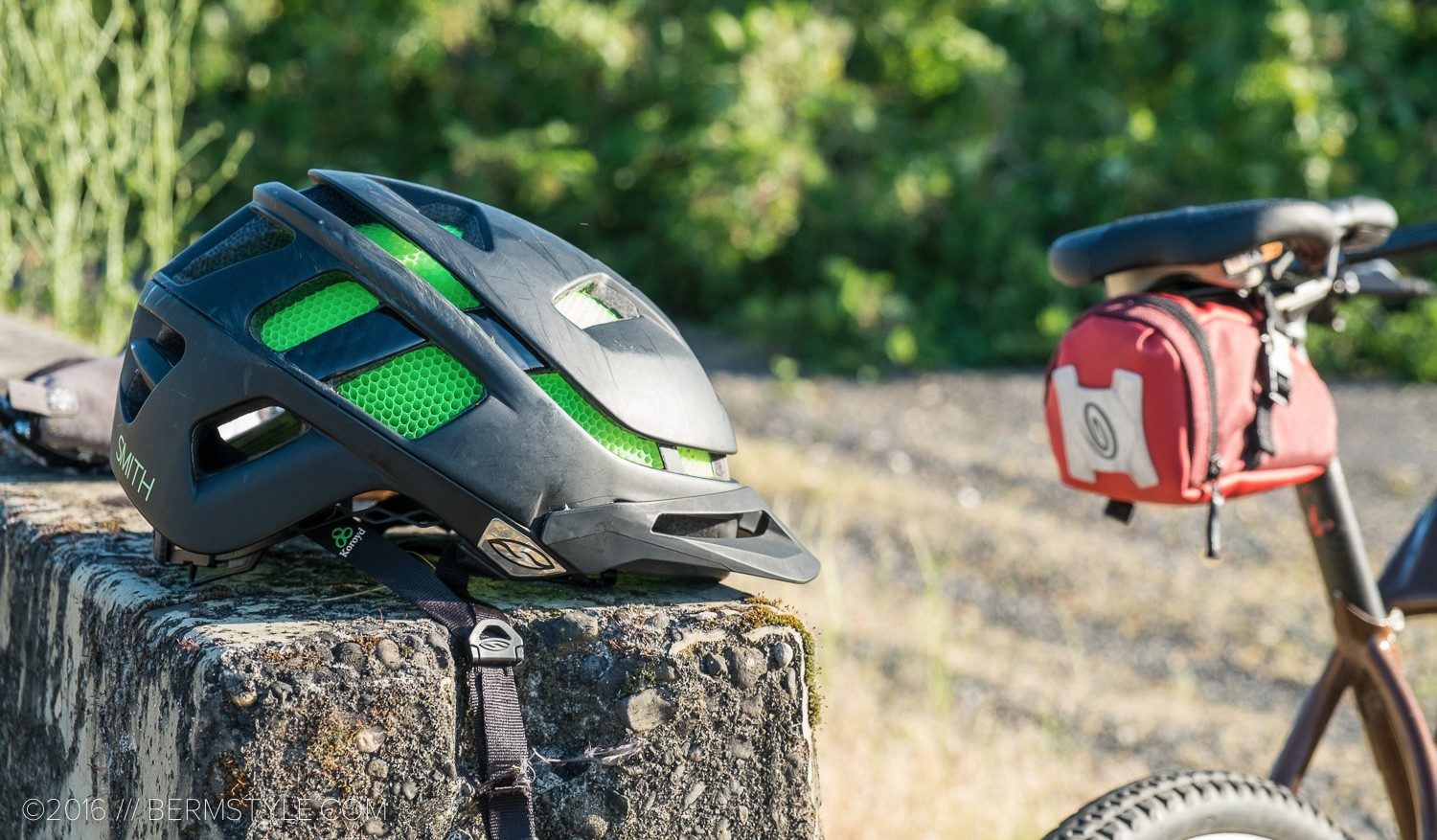 Earlier this year I began a full time helmet wearing policy at Inga’s behest. My Smith helmet quite possibly saved my life – or at the very least, saved me from a bad concussion. Thanks Smith.

I don’t recall the next few minutes. I begin to wander around in a daze, feeling out my arms and legs. People are walking up to me asking me questions.

I look at the branch that landed on the ground to my right. I had managed to avoid the larger sections, and I realize how close I came to having the contents of my skull being dispersed across the pavement. 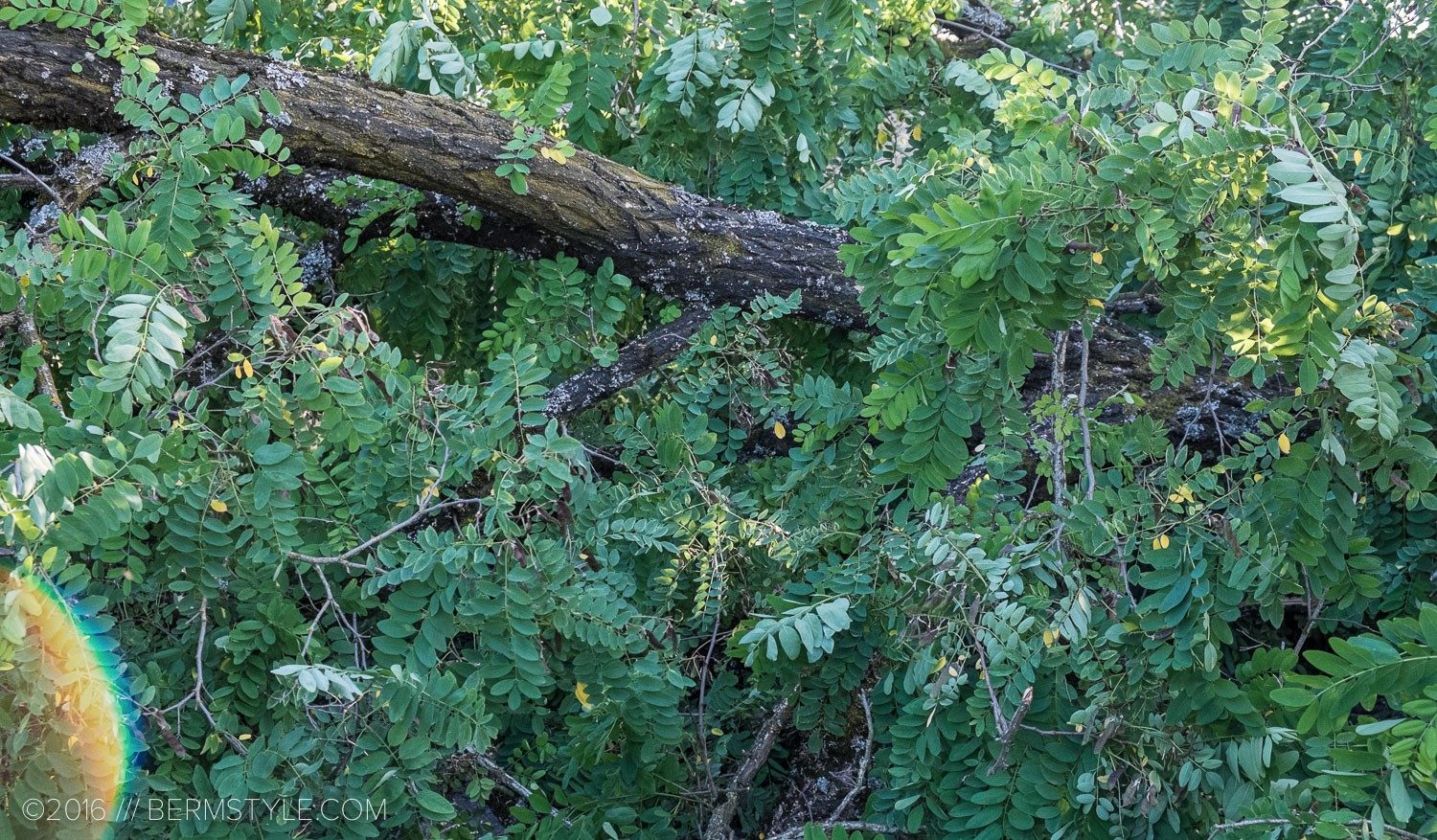 Fortunately, I managed to avoid being stuck by this section of tree.

I can’t figure out if I’m lucky I managed to walk away from things, or if I was unlucky for being in the wrong place at the wrong time. 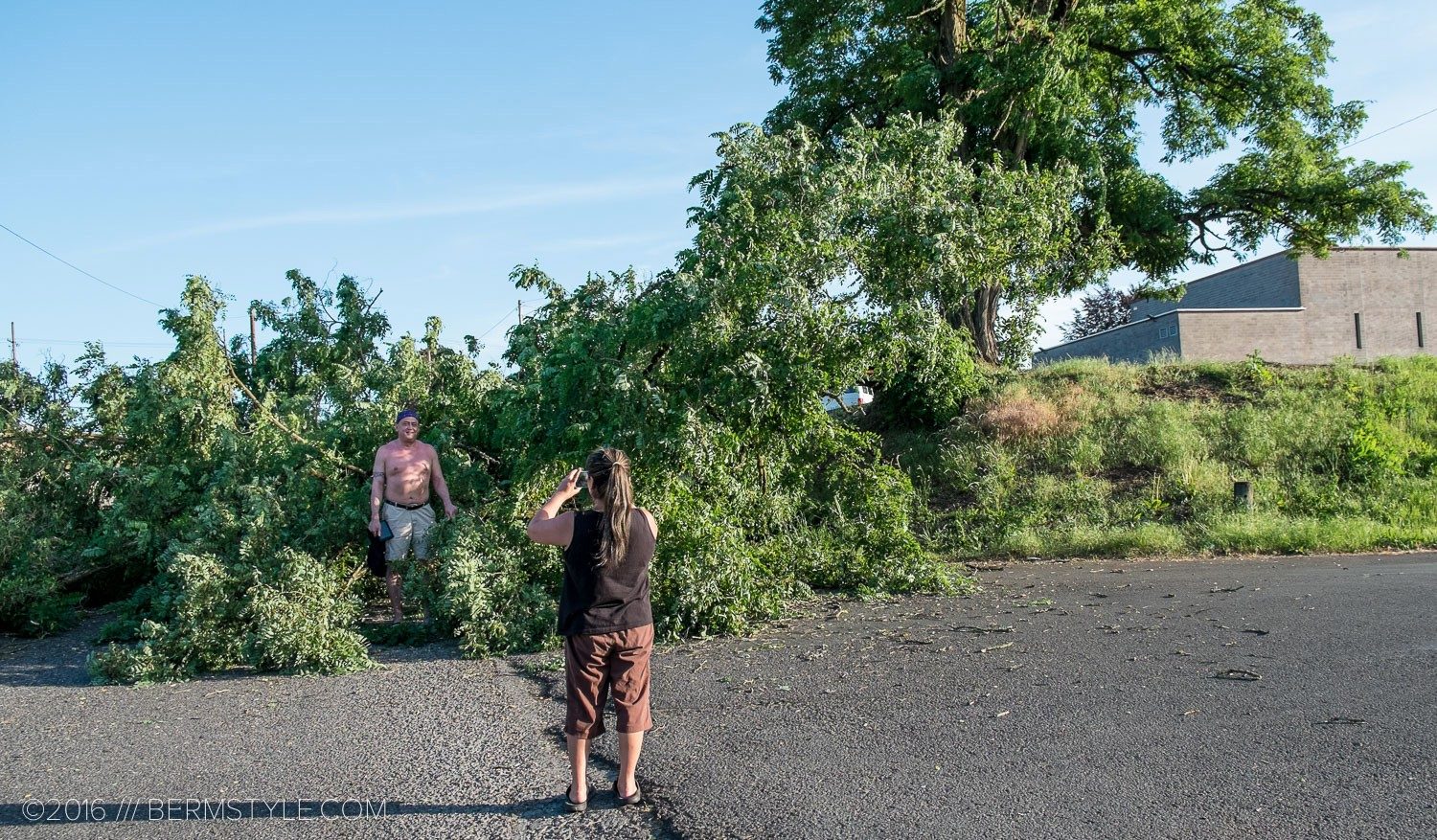 10 minutes after the incident, local residents were posing in the downed tree, oblivious to the fact I was almost a splattered mess underneath it.

A crowd has gathered at this point. Cars are unable to pass, as the road is completely blocked, and they get out to gawk at the sight of the downed trees. Cell phone cameras come out, and they begin to share the image of the downed tree on their social networks. 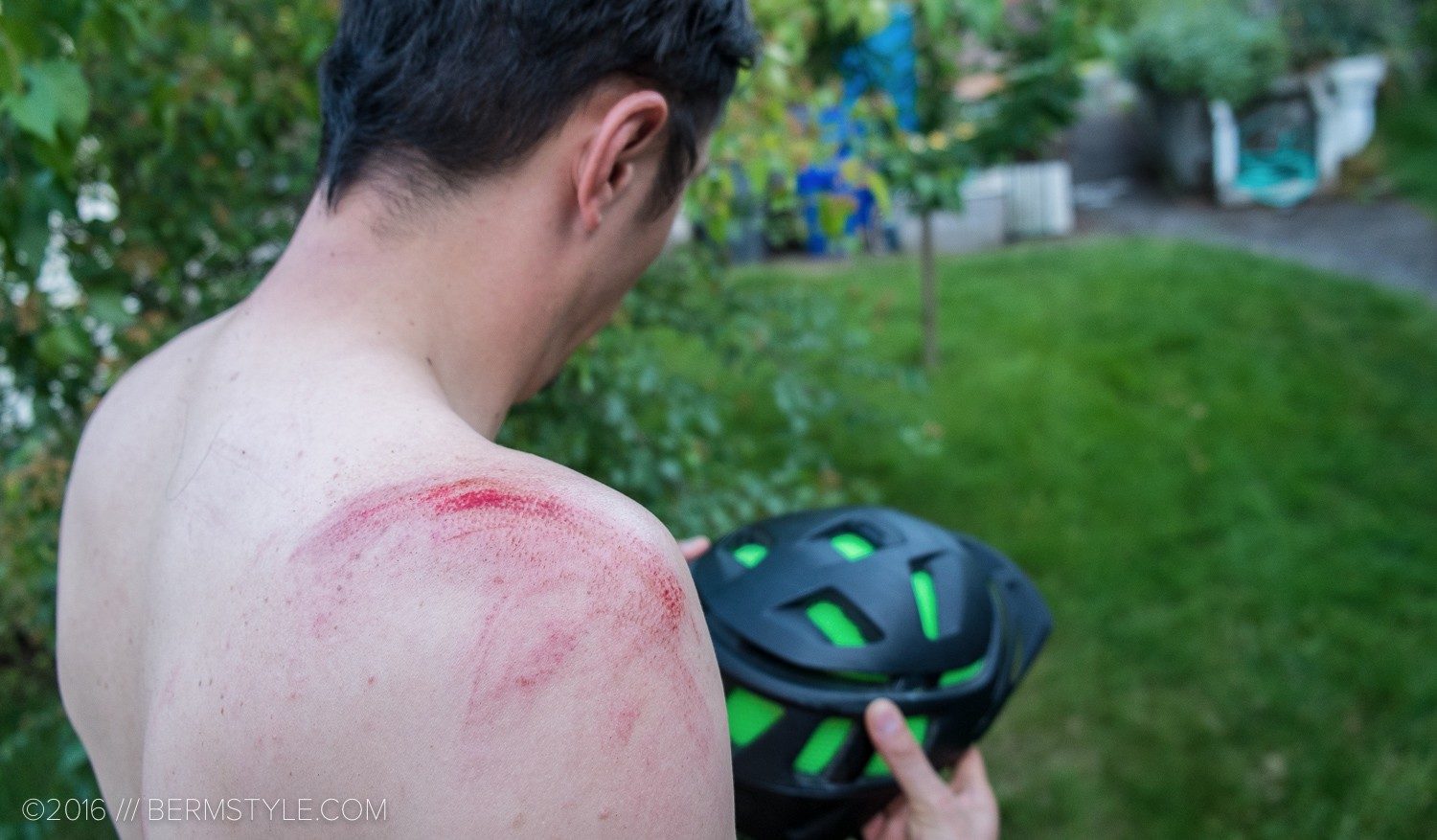 The branch that struck me glanced off my helmet before striking my shoulder. I’ll be sore for a few days, but I’ve had worse. Other than bumps and bruises, I got away light.

A few people gather around me, asking my story. I’ve pulled my bike out of the foliage at this point, and leaned it against the barrier that lines the street. Tree branches are still hanging off my bike.

Eventually I pull the camera from my pack and document what happened, still in a daze. I refuse several offers of rides to the ER. I’ve crashed enough times on my bike to know I may have a concussion, but I’m also not about to risk the lose of my bike and gear for a trip to the emergency room, and based on a brief self assessment, I’ve taken way harder hits.

Eventually I look my bike over. My wheels are straight and my derailleur doesn’t appear to have taken damage, and I eventually make my way home, still bewildered and in a daze. I take my time, knowing that it would be easy to do something stupid and burn up the rest of my luck- good or bad. Stopping at a convenience store, I get a quick pick for a lotto ticket. Who knows, maybe I’ll get lucky.

Plus I need a new helmet.