All you need is dirt, water, some tools, and a lot of time. The plan: create the most awesome backyard possible within the given amount of time and resources. Seeing as I’m currently in transition and have a healthy amount of downtime in the Astoria area while looking for work in Portland,  moving a ton of dirt by myself was not only cathartic, but good exercise.

Phase one: the Pump track.

My design constraints initially consisted of a underutilized space on family owned property. Years ago, this was my father’s workshop space, where he had been working on building a sail boat, and had a workshop for his business at the time. We also raised poultry in this area. Fast forward 20 odd years later to now, and the space was pretty overgrown with bushes that my brother or I would hit with the weed eater every few years. I knew the area was fairly flat, but most importantly, it couldn’t be seen from the house, as I wanted to avoid creating an eyesore the family would object to. 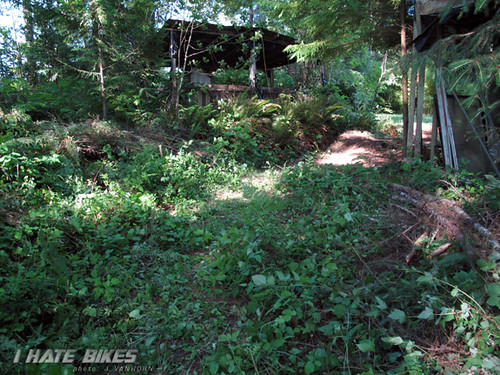 My initial concept was simple enough. Build a basic oval track, then later build a track in the lower space further down the hill. Connect the two via dirt jump lines, and an uphill pump line, with the goal of never having to pedal. Unlike pump tracks in public bike parks, the end result would ideally be more like a dirt skatepark, where every feature was ridable in at least four directions, with endless line choices.

The initial pump track area was pretty small, but as I was planning to build it solo and by hand, (with future add-ons  to be built with mechanical assistance) I decided, it would be suitable. At this point, I really just wanted something to ride that I could finish withing a certain time frame. The design was to be scalable, with transfer lines feeding in and out of the initial loop.

So I headed down to Home Depot, and bought myself a pulaski, a cutter mattock, and a flat head shovel. (I already had a spade) I took my pulaski, and started to cut out the vegetation, one bucket load at a time, stacking it far down the hill. 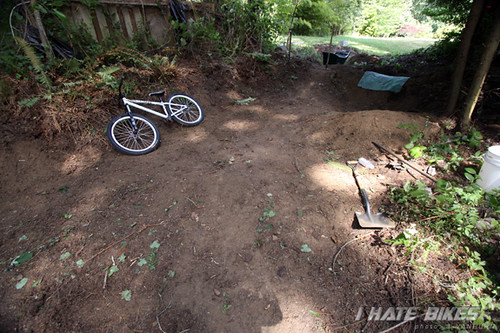 After several days of hacking vegetation, we have dirt. 8/2/09

Removing the vegetation by hand was the most discouraging part of the process. I had initially planned on blogging the results of each work day, but the slow progress was almost depressing. (Fortunately my friend Jeff is planning to bring an excavator over to aid in phase two.)

At this point I began to construct the berms, the first step in laying out the actual track. 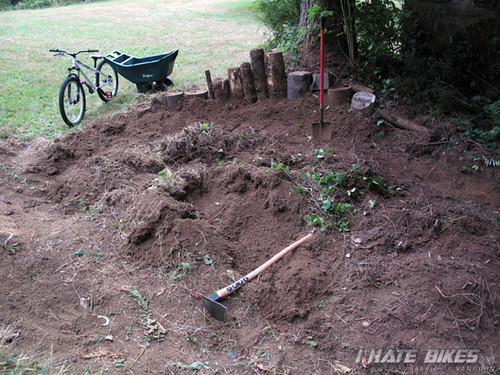 Determining the apex of the turn. FYI, all those roots were a bitch to take out. 8/2/09

I had some wood around that I planned to use as a basic crib wall, that would save me some time. Since I wasn’t actually cribbing it out, I would need to place material on the other side to actually stabilize the berm. Once I determined the radius of the turn, I began placing my dirt. 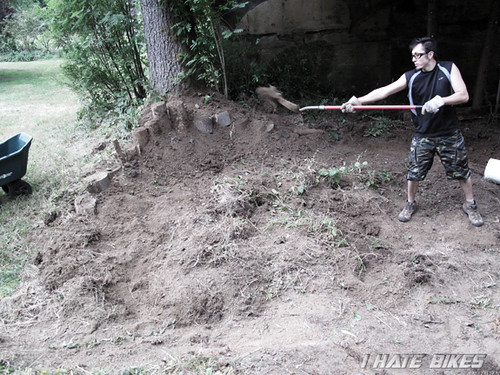 Time to start shoveling. One thing to consider was that, like building a bench cut in trail building, all the organic matter has to be removed, otherwise the dirt won’t compact correctly. The only time you can really cheat, is with larger pieces like logs. For something that would need to last long term, at some point they would need to be dug out and replaced with better soil, preferably something with a high clay content. As recommended by the ABA and the NBL, the best dirt for building BMX tracks consists of 80% clay and 20% silt- and a pump track is basically just the rhythm section of a BMX track. 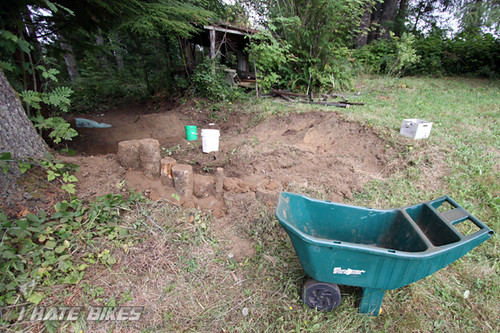 I was hoping to avoid creating 180 degree turns, as the technical level of the track would discourage my girlfriend from riding it, but at this point in the construction, she was still feeling burnt out on digging and riding in general. However, space constraints looked like I would at least have a corner-roller-corner set up here. 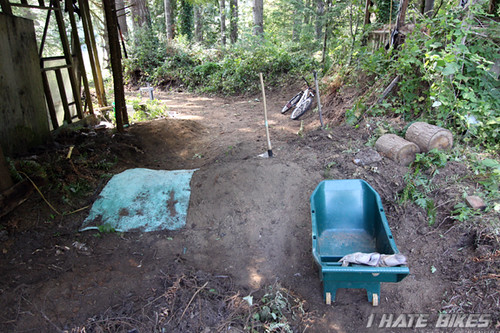 Coming along; still way more organic matter to dispose of. 8/2/09

At this point, the project was put on hold for a bit, as we spent a few days riding,  and then helping construct the local BMX track. A few solid days of work later, and I had this: 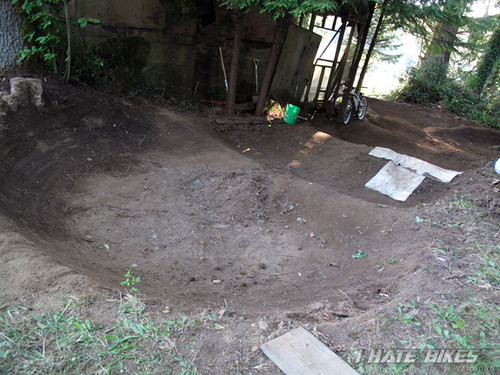 My brother and his family were coming to town in a few days, and so I stepped up my efforts, hoping to having a ridable track we could session. I had already started on several of the rollers, but began to focus on the first bowl at the other side. 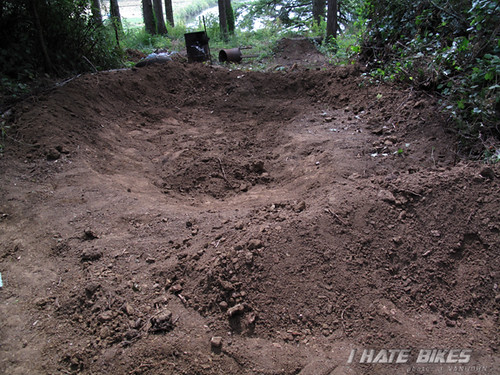 My idea for the bowl on the other side changed a few times, as the layout evolved.  At this point though, I just wanted a way for the rider to change directions, and come back the other way. I began to have the idea of a loop with a turn in it, then it evolved to a figure eight. 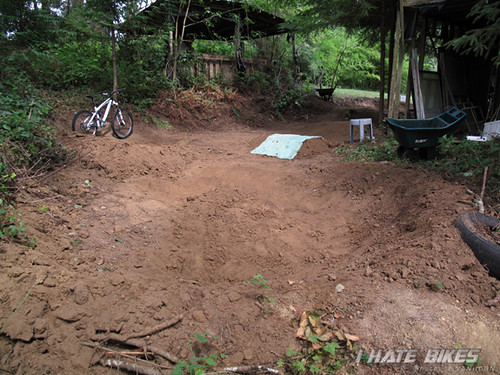 I started to cheat a bit with this part. I had to keep hacking at the bushes viewable on the left, and the metal scrap buried there gave me quite a bit of trouble. I placed some wood around the bowl to aid in visualizing the radius, and ended up burying it- though it could possibly cause issues later. (ah, eff it) 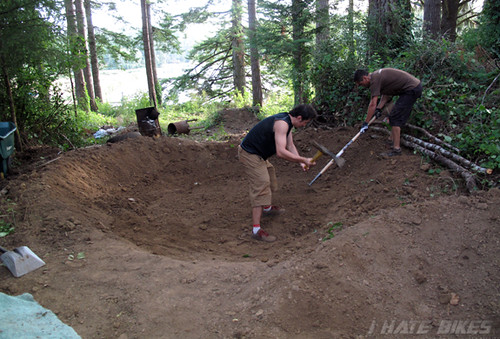 When my brother Izaak arrive, he was as stoked as I was on the project, and together, we started making some serious progress. It was like having two of me working at once! In fact, with twice the manpower, we were able to get the track to a point where we could pedal around it. 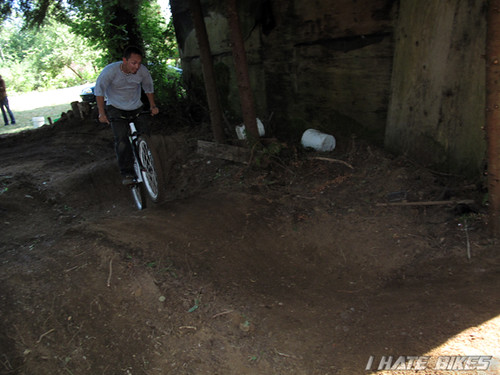 It was time to hook up the hose, and start compacting dirt. After wetting it down, we placed carpet over the rollers and stomped it all down, repeating the process over and over again until it looked like this: 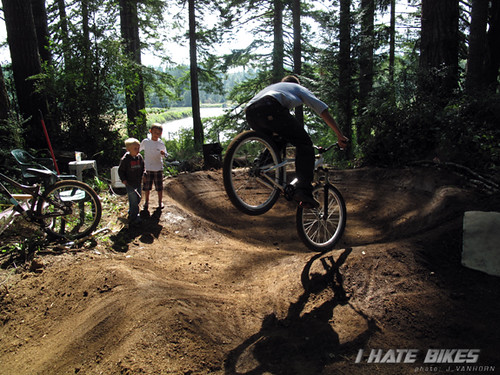 Even more awesome was that the placement of the last roller into the bowl worked out really well. By putting it a bit closer and giving it a pyramid type shape, it worked to the left, right, straight, and hard right.

At this point we widened the entrance to the bowl, and decided it needed more of a horse shoe shape. We also began tearing apart some of the rollers, and digging out the roots, and clearing any remaining organic matter, as they weren’t compacting satisfactorily. I wanted the walls of the bowl to be huge, as I am creating a bike park, (and not just a pump track,) so we began digging down in the center, and using it to build up the walls. The plan was for the bowl to be a feature that would feature transfer lines into downhill jump and slalom lines ending in a huge feature. 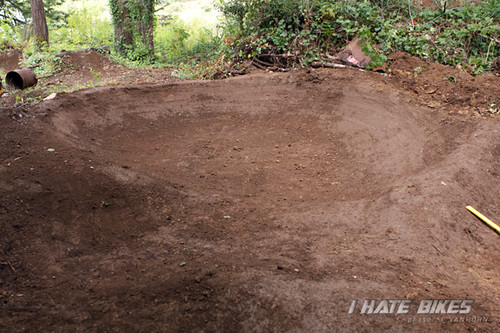 We have a track 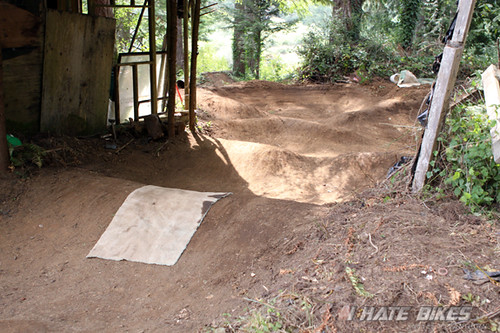 Now it was time to invite some of the guys over, and ride the thing. Getting some good use would aid in compacting soil, and with the help of Jeff and Eddy, we started pulling stumps and vegetation so that we could start the second bowl. Jeff spent almost an hour chopping a stump out, which was much appreciated, since that meant I didn’t have to hack at the stupid thing for an hour. Thanks buddy! 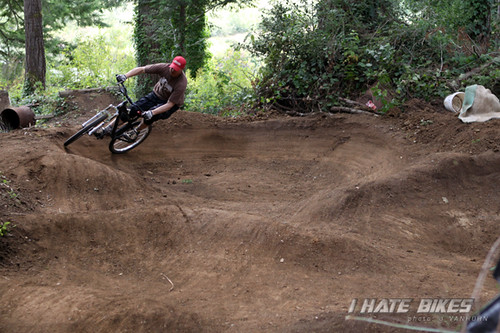 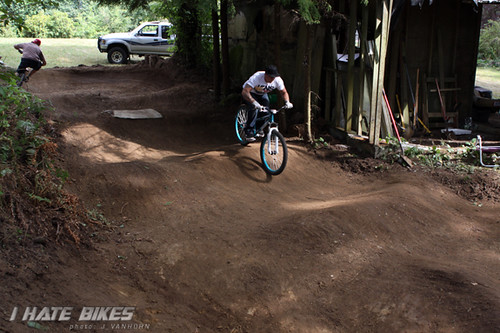 At this point, it was getting hard not to ride the thing all of the time- my problem now was that after a few runs, I’d pick something and start improving it, and was constantly working to dial in the lines, and modify sections to create new ones. And the bowl still wasn’t big enough. 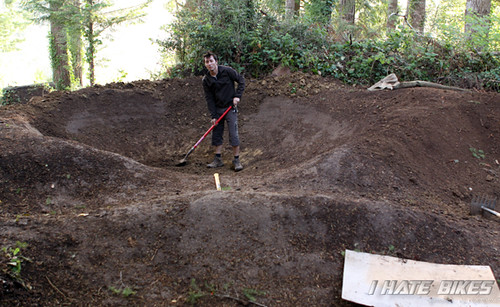 Finally, a few days ago, I was able to convince Inga to come out and try it out. She wasn’t crazy about the bowl, as at this point, the height of the walls and the tight radius were making it less than beginner friendly, but I was able to convince her that if she designed the second bowl and helped dig it out. With Inga’s help, we finally dialed the radius of the second bowl. Ed came over and between the three of us, we got the final part of phase one complete. 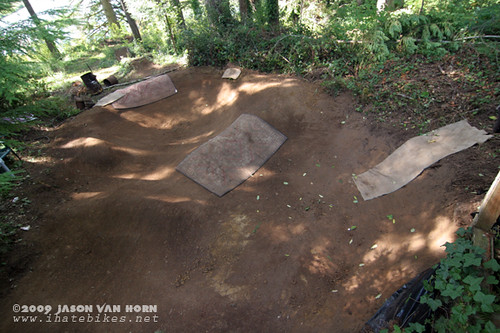 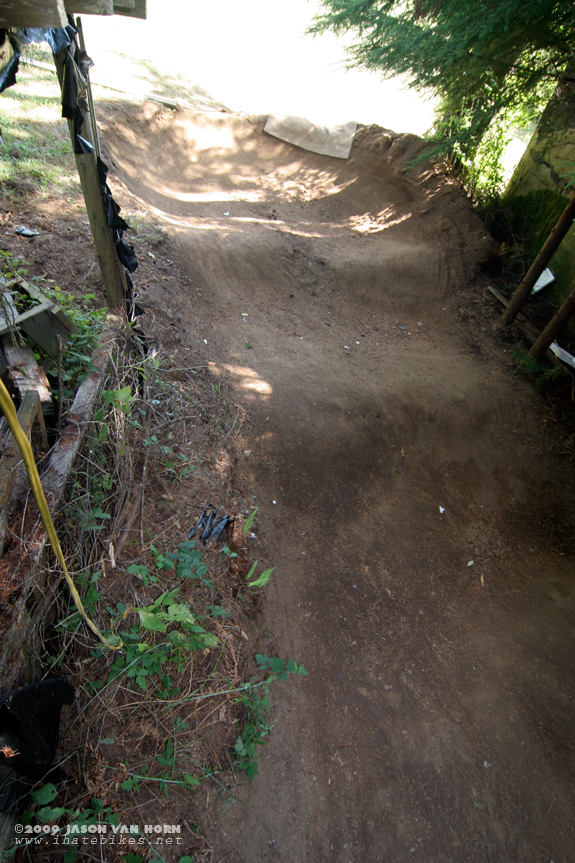