Hitting the road on a mountain bike road trip is the highlight of the summer for any die hard rider and for our big trip we decided it was high time we made a return to the mecca of mountain biking, Whistler. As we were traveling by car we also had the goal to ride as much as possible, and be on a bike everyday. We’d head north from the Bay Area, session sweet trails when we could, and along the way, seek out the best flow trails the northwest has to offer.

Day one was spent prepping gear, loading the car and driving the first stretch to southern Oregon. In the morning, instead of hitting the usual trails in Ashland and Talent, we decided to change things up. We’ve been wanting to make a trip to Bend for some time and check out the scene for sometime, and hell, it was only a few hours out of the way. Decision made, we plotted our route and decided to just go, with no prior planning whatsoever other than some smart phone web research on route. We’d just show up, find the best rated bike shop on Yelp, and grab local info there.

Turns out this strategy worked pretty well for us, with a few caveats. We found out there was a shuttle option from local guides Cog Wild and were psyched, as a shuttle would mean we’d be able to get more miles in and cover more trail. Unfortunately the data we gleaned from a random web post was incorrect, so we ended up booking a shuttle for the next day. 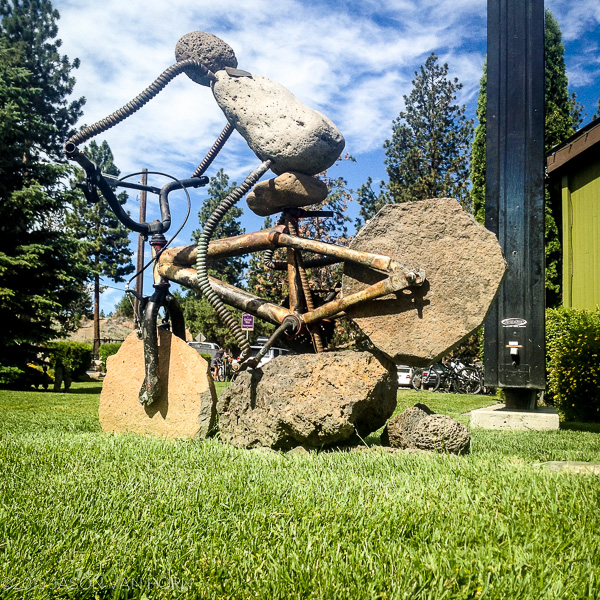 Some art work outside of the bike shop.

We rolled into town and stopped off at Pine Mtn Sports, a local bikeshop that happened to be next door to the shuttle service. I was having trouble groking the local landmarks, so we rolled in with the help of the native iPhone maps app. The shop is conveniently within riding distance of the local trail network, and walking in we were received by really great energy and customer service.

Armed with a free map, (I normally buy one when traveling, but since we knew we wouldn’t have much time to explore and wouldn’t be returning some time I passed this time around.) we headed up the road to Phil’s Trails. 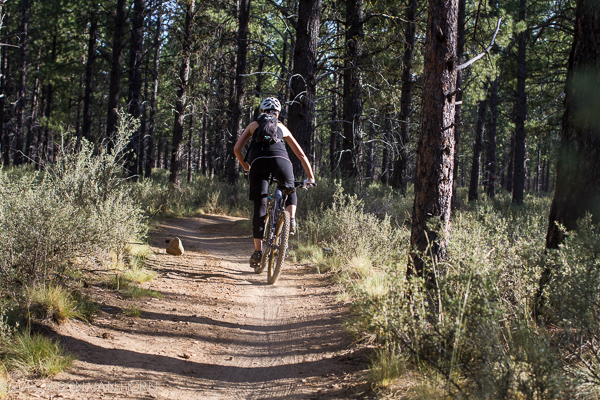 Heading out from the Phil’s Trail Trail Head.

The flow trail Whoops was the spot we had heard the most about, and at the top of our list. We also had heard good things about a number of sweet jump lines. However, when we hit the single track  I realized I brought the wrong bike. The loose, sandy soil wasn’t a good match for a 160mm  Nomad with a build designed for abuse. Meaty 2.35 Hans Damfs tires and their super gravity casing are sweet for burly trails, but were extremely slow rolling here. With a hydration pack and a camera on my back, the first ride we did was a lot more work than expected. The trails favor light, fast rolling tires. In hindsight, out of my current quiver, my whip-it fast Santa Cruz TRc would have been a blast, and plenty of travel for the occasional rocky section we encountered.

After a few miles of pedaling in the direction of the Whoops trail we also realized that our free map, while free, did nothing for us in regards to scale. We had no idea of how far it was to the trail head, and being our first time at the Phil’s Trail network, were completely disoriented. We also had a late afternoon start, which didn’t help. At one point I made the call to turn around and we decided instead to search for dirt jump lines instead. The freeride area known as the Lair looked fairly close by, so we headed back to search for it. 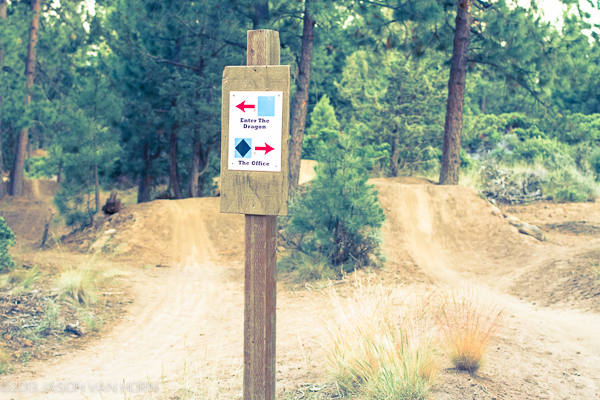 Start of the jump line at the Lair in Bend, Oregon.

The irony is that we were actually not far from the slalom track line— we were just on the next trail over. This was a bit of a bummer, as we ended up pedaling around for the next hour killing the best of the afternoon light. We thought the Lair was quite a bit closer based on our free map, and by the time we realized we needed to follow the trail we were on a bit further it had started getting dark.

Eventually we found it though, and were rewarded with an amazing view of an area littered with jump lines. As it was already getting dark, I didn’t bother with padding up and just got to it. 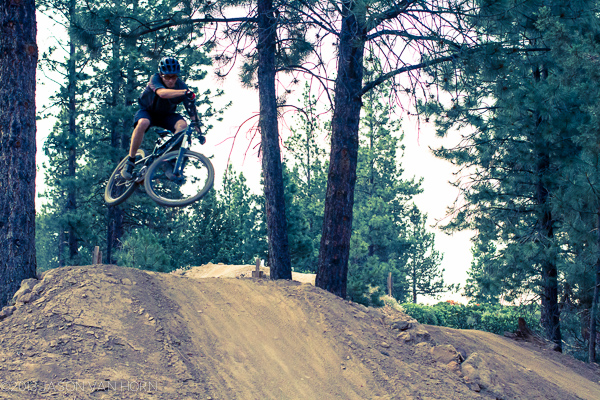 Working through the “Office” line at the Lair.

Next time I pass through Bend, I’m definitely spending more time at these jumps.

The next morning we were up early for the shuttle and headed back down to the bike shop. After stashing our vehicle, we stacked into the shuttle van with about 8 other folks and headed out on the 46 towards Mt. Bachelor. A while later we were dropped off at a SnoPark location and left to our own devices, armed with the not-so-trusty map we had the day before. (here’s a link to a better one in PDF format you can download) Fortunately it isn’t that hard to find the way back to town, so we headed east heeding the advice to seek out Swede Ridge, although I believe we ended up coming down Sector 16. The trail quickly went up and we gained a bit of elevation for a few miles before finally we began descending back towards town.

The soil in the turns was loose and dusty, and favored a foot out flat out approach at speed. I tried drifting a few times without bothering to unclip (this was about 16 miles into the ride) and was rewarded with a meeting with the ground and a mouthful of dust. (yummy) Riders going for broke might enjoy running some light XC type pads, but as it was quite warm out, I simply dusted off and kept the gas on— drifting is sweeee-eet!

Eventually we encountered the Whoops Flow Trail, and it was fun as expected, a downhill slalom course that resembled an old school slalom course as much as a downhill pump track. The flow was solid, with plenty of opportunities to  boost some hang time, double up rollers and table tops. (what the hell happened to the jumps we were supposed to have on our local flow trail?)  At the bottom of the trail we encountered two different groups of riders from the Bay Area— a pleasant surprise. 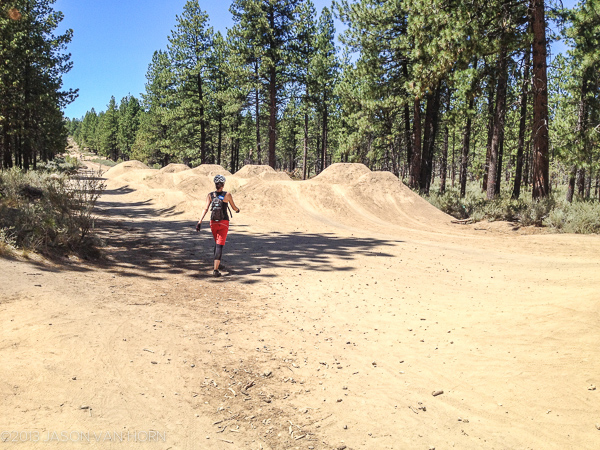 We continued down the trail and elected to try Ben’s Trail back. We were blown away when we came across this sight just to the left of the trail a few miles in.

The downside to running into sweet jumps at this point? We’d already logged several hours of riding and still had to ride back into town. On the upside, we managed to find a route back to the bike shop (and our vehicle) that was mostly trail and minmal pavement. We wished we had one more day to play, but we packed up and were back on the road for the next destination. 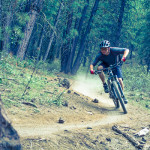 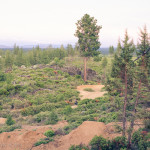 Overview of the Lair 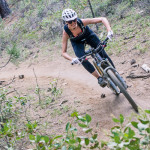 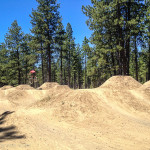 Playing on the jump line off Ben’s Trail 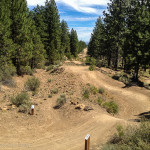 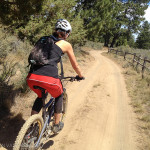 Pedaling back to town 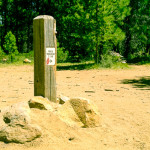