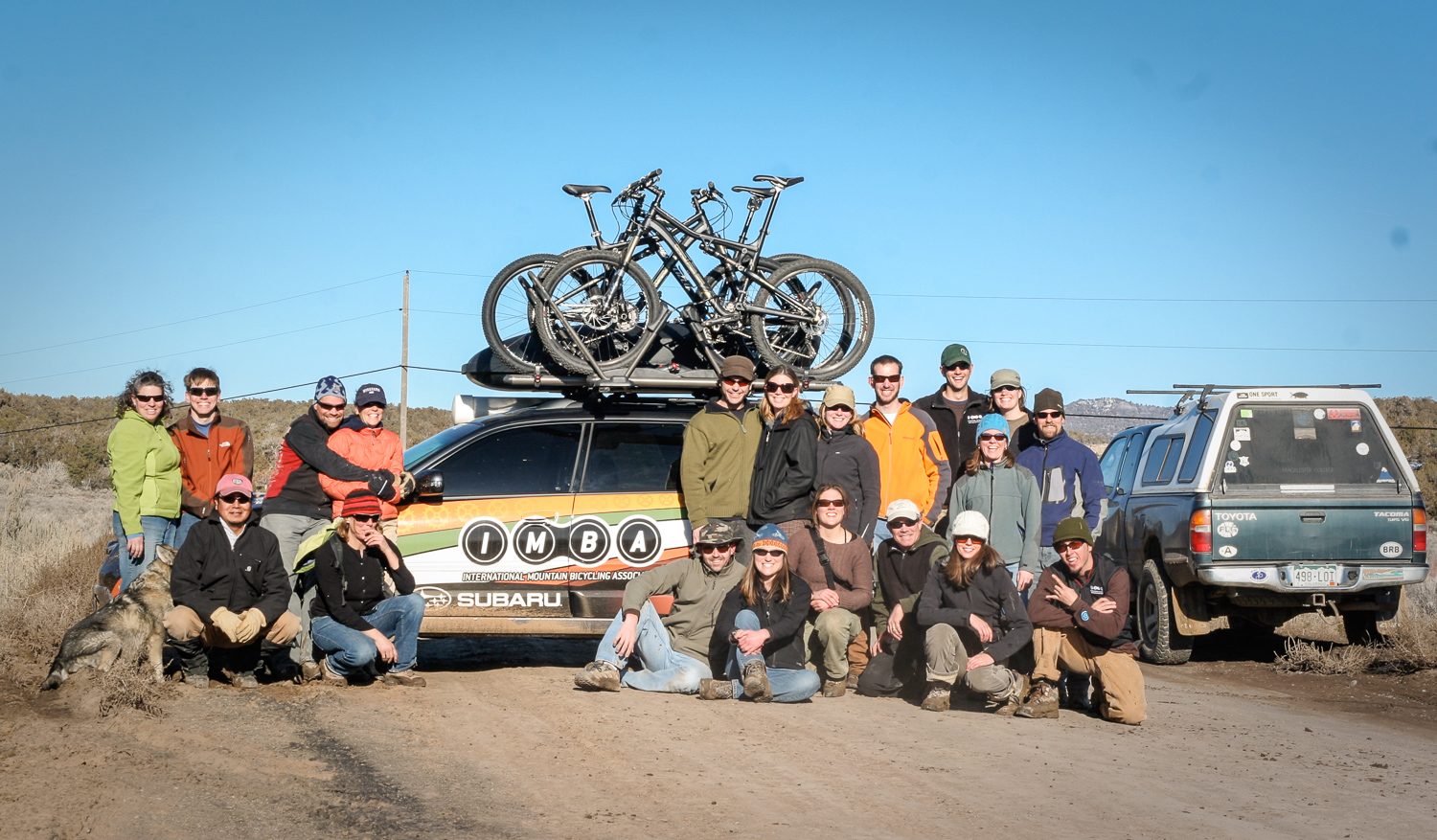 We’ve been living on the on the road for a while now. Here’s summary of where we have been, and here is an account of the missions the Subaru/ IMBA Trail Care Crews have accomplished to date:

Working in conjunction with COMBA, the Trail Care Crews had meetings with officials and land managers from Jefferson County Open Space, Golden Parks and Rec staff, as well as the City of Lakewood. Kelly and Collins gave their Gateway Trails Presentation, which we used as a segway to open a dialog about the community’s need and desire for bike parks and progressive skills areas, as well as potential DH specific trails at Idaho Springs. Everyone was engaged in the dialog and a few potential locations were suggested. They were positive meetings and we were able to educate and clarify the difference between bike parks and skate parks. Our goal should be to accommodate users of all skill levels and disciplines, and our advocacy for skills parks and pump tracks should not replace dirt jumps and ramps!

This is an issue I personally am heavily engaged in, as many mountain bike skills park advocates are afraid to ask for what is needed, and are satisfied with getting a few teeter totters, a few balance features, and a pump track. We are not doing our job if we do not accommodate the more advanced users as well when we present bike park master plans. Land managers are always going to be leery of the liability from large, advanced dirt jump/ features, but if we do not address the needs of all users, we will just be encouraging more rouge building. 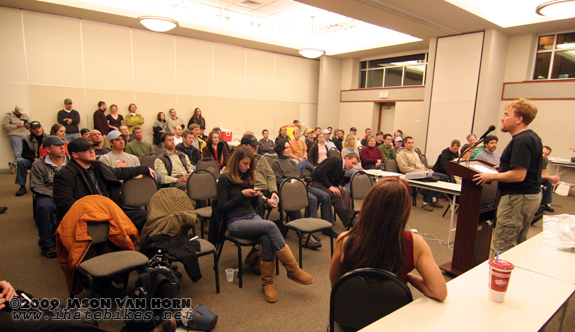 After the meetings, we had a social with the board members of COMBA. The next night, Kelly and Collins presented our Club Care Presentation at the monthly COMBA meeting. They had a great turnout, with tons of Pizza and beer donated by local businesses.

We then headed south to Cortez, Colorado to meet with Stephen Barnes and Dani Gegory of the Kokopelli Bike Club. They have a great trail network known as Phil’s World. Started about 12 years ago, they have in the recent years become more proactive about maintenance and building, and for the last two years have put on a 12 Hour Race that really started bringing in riders from all over. With over 22 miles of single track trails, what they were lacking was a beginner trail to cater to riders just starting out.

We spent our first day out in the field brain storming with them as they had a major challenge in from of them. The beginner trail had to cross this: 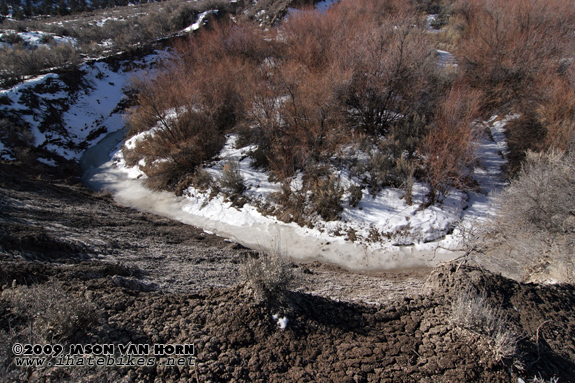 Our challenge was to flag a way past this.

We spent quite a bit of the day tromping around in the field, but we managed to flag a corridor that should be sustainable.

The next day Kelly and Collins presented the Trail Building School. Then we headed out to the field to apply the concepts, focusing primarily on trail design concepts, as the ground conditions less than ideal for building. Everyone did great, and part of what will be the new beginner trail was pinned. 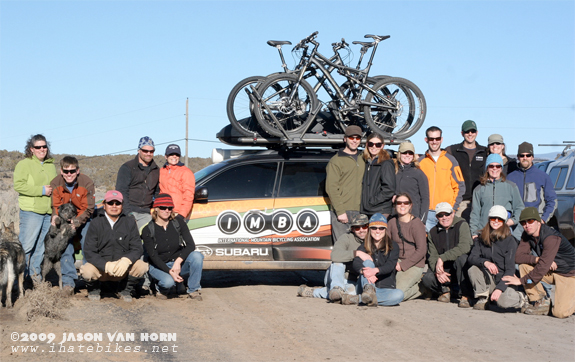 After a design class in the field; a group shot with the Kokopelli Bike Club

That night we attended a super bowl part hosted by the local bike shop, (they also hosted the trail building school and were really great) Kokopelli Bike & Board. Thanks to all for your hospitality!

Next we headed to Phoenix, Arizona where we met with key members at the Parks and Rec. They took us out and we looked at 3 major sites that are on the agenda. 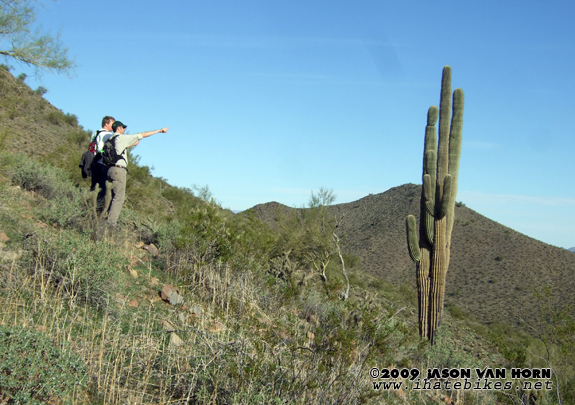 Out in the field with Phoenix Parks and Rec

Phoenix has a great deal of mountain biking available to local mountain bikers. Part of this is because Kathi Reichert, the Parks and Recreation Deputy director is an avid XC rider and always has the mountain bike community in mind.

Unlike other areas, where riders have had to band together to advocate for the sport, the local riders leave all of this up to the city of Phoenix. Unfortunately for freeriders and downhillers, their interests have yet to be represented. Popular trails at South Mountain, known for its technical, rocky terrain, (and are shuttlable) are over capacity- these popular trails get over 3 million users a year. User conflicts on the trails have been increasing with many hikers demanding trails be shut to cyclists.

During our meeting with Phoenix Parks and Rec, Collins and Kelly led a discussion on the Gateway Trails concept, which Phoenix is already on its way to implementing. We suggested freeride and skills parks options to alleviate and round out the various user experiences and discussed the construction at a rouge freeride area known as NRA.