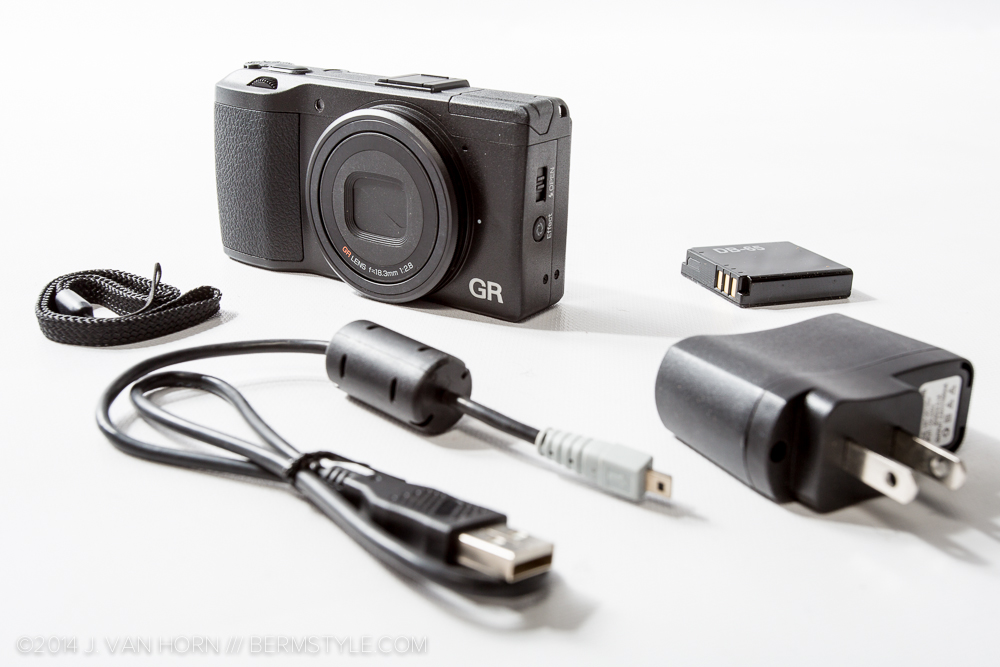 Unless I’m shooting for a paycheck, I’m not interested in toting a 20lb. pack of camera gear on rides. That doesn’t mean I don’t like or want to capture moments from our rides. Fortunately I don’t have to lug around a huge pack just to get a few decent photos. We used to carry an inexpensive point and shoot with us when we wanted a “just in case camera.” However, the quality of the images they produce kind of suck, and we wanted something better.

When looking for a good trail riding camera you have a few options: 1. Go with a budget point and shoot that adds minimal heft and will always be in your bag. These are small and inexpensive enough that you’ll always have it, but other than a group photo, don’t expect much more out of it, unless lighting conditions are perfect.

Option 2. Carry an SLR with a small lens. This isn’t too bad, and for a while I carried my back up Canon body with a small 40mm pancake prime lens when I wanted a decent photo from a ride. It was a great solution for creating content for Bermstyle, and while I missed having the options provided by a variety of lenses, it wasn’t really that bad of a carry. I see photographers carrying huge packs all the time on their rides, but that’s not for me. My riding time is my time unless I’m specifically working to create an image.

Option 3. Look into the latest crop of compact cameras with APS-C sensors. Today’s compacts incorporate the same tech as an SLR with low noise and high resolution, but many of them lack in regards to shooting action. We’ve been looking for option 3 for a while, and after a lengthy bit of online research the camera decided on the Ricoh GR. 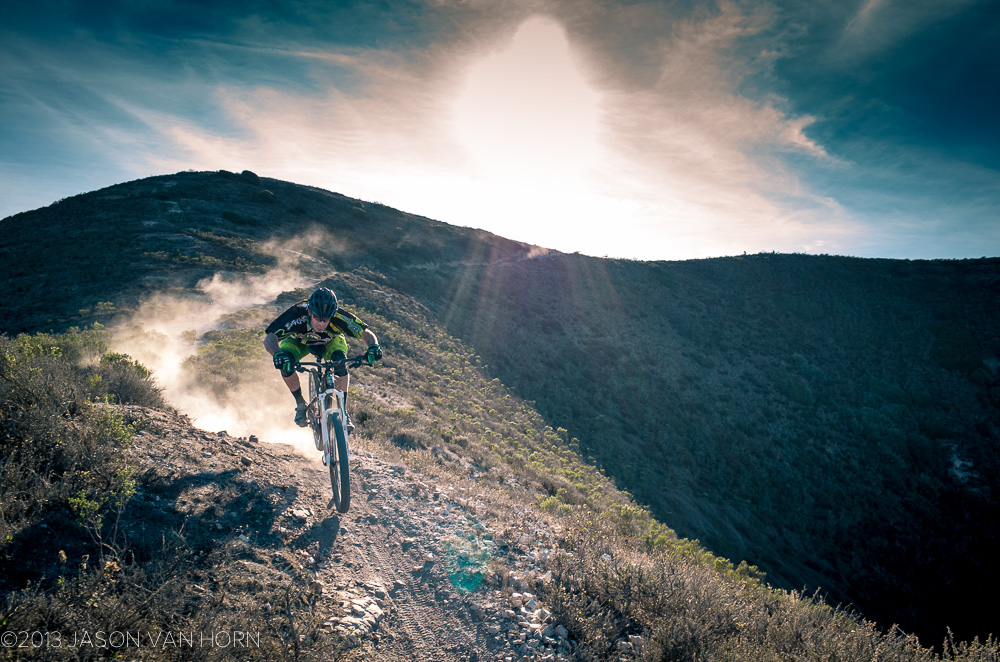 The Ricoh has the same guts you find in consumer SLR cameras, but in a small form factor, with well placed controls. (The other model I looked at was the Fuji X-100s, which was a camera with rave reviews from a number of pro photoblographers I follow. Like the Ricoh, it featured a prime lens and a APS-C sensor with 16 megapixel resolution.) In the end my purchase was based on two decisions: size/ form factor and bang for the buck. The Fuji x100s lists for $1299, the Ricoh for $799. I don’t baby my gear, and the plan is to take the camera everywhere. The Ricoh was close in performance, but cost significantly less. It also was significantly smaller and lighter. I can run the Ricoh in a jersey pocket, or even my shorts/ pant pocket. The wide angle helps keep the action in focus, but does limit the types of shots you can get to some extent. We’ll trade that for an extremely fast burst mode, and high ISO sensitivity so we can shoot action shots in dimly lit forest. 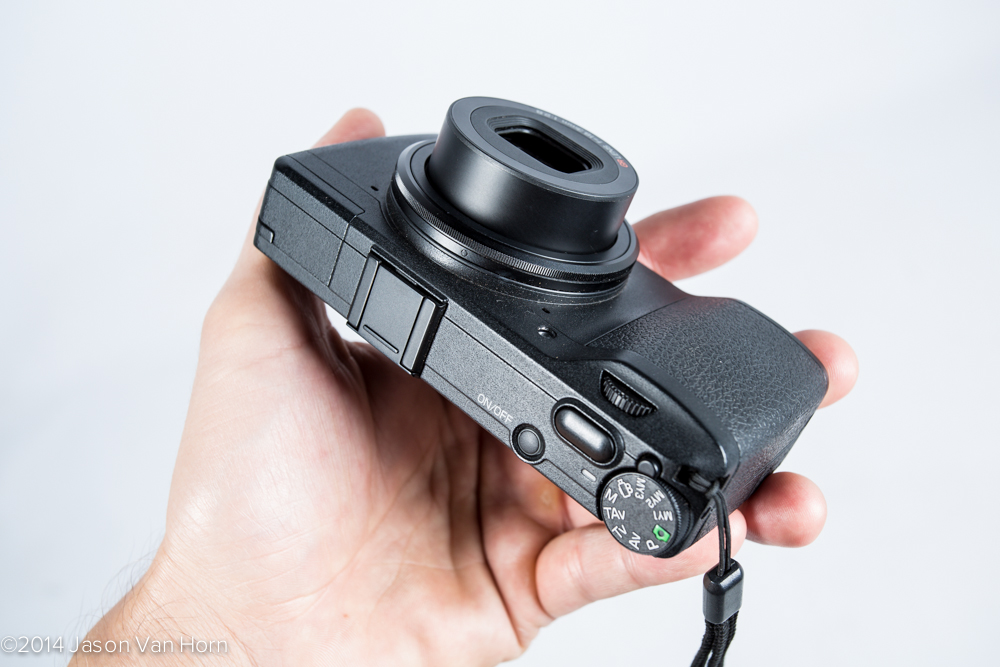 The lens retracts when the camera is turned off and is flush with the outer ring.

We won’t go to heavy into details as there are already plenty of great reviews for the Ricoh GR online, but we did find there a few weird quirks to sort out when you first use it. Setting the camera on burst mode completely disables the flash, and if you don’t know to reset it to single shot mode, you might just tear your hair out figuring out the solution.

You’ll also want to make sure you know what the AEL/AFL/ C-AF switch does, unless you like the mountains behind your subject in focus as opposed to your subject. (we currently prefer to pre-focus our shot to the continuous auto focus shooting mode as we’ve gotten more consistent results) I also once formatted my card two hours into a ride by accident after a crash that left me light headed— pushing the menu button, right, right and ok really put a damper on my day. I no longer leave the camera menu queued up to format and change the setting to avoid having that ever happen again. 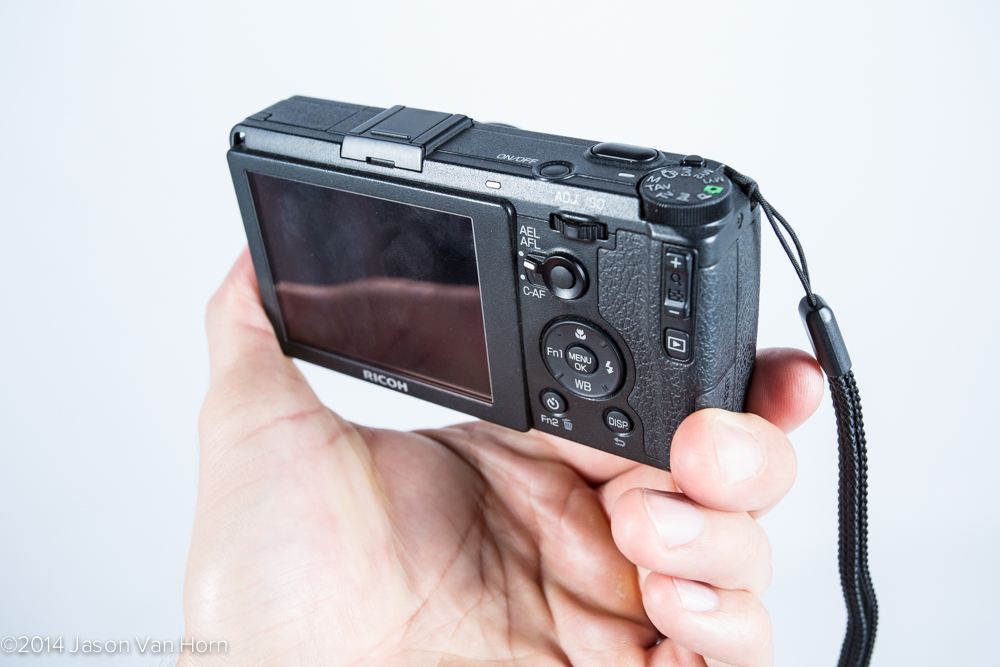 Back of the Ricoh GR

Like any modern camera, you have to commit to learning how to use it in order to eke maximum performance out of it.  Bang for the buck, the Ricoh packs quite a punch, and it squeezes a hell of a lot into a small package that can fit in your front pocket. The best part is that it’s come down in price since I purchased it; you can find one for under $700 now. 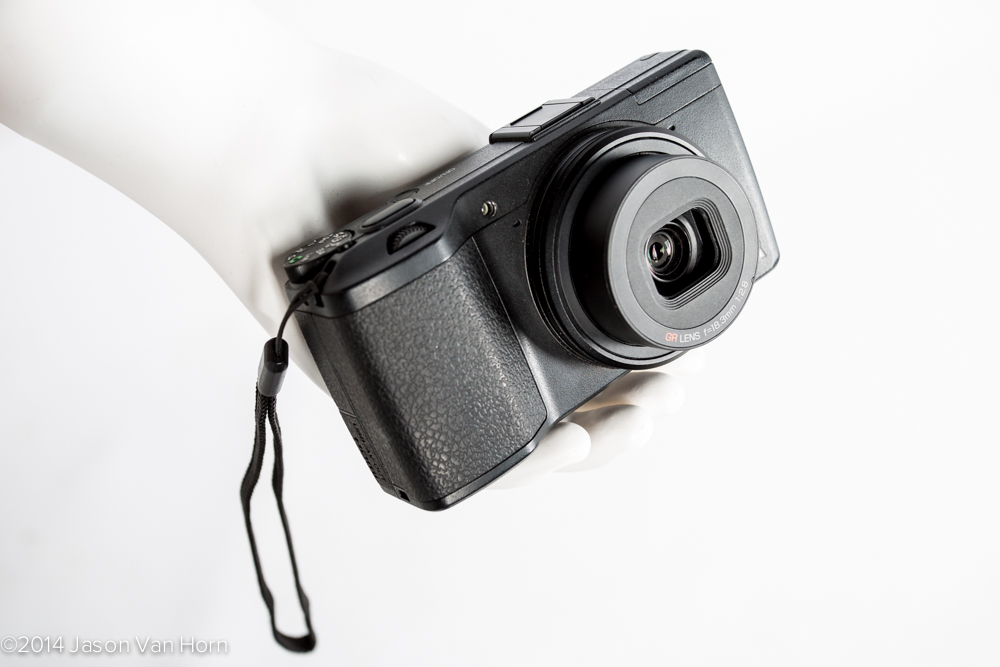 Small, and portable, with the ability of an SLR — the Ricoh GR

Check it out: Ricoh GR

<update 1/30/17>
Our Ricoh GR died last week, after several years of being banged around our Camelbaks and waist packs without a protective case. According to the Ricoh site, it looks like repairing it will cost $200+, so we’re currently debating replace vs repair.

The successor to the GR is the Ricoh GR II, and runs $597 on Amazon.com.

For the time being I’ve been using our other compact mirrorless camera, a Fuji X-E1. I use the kit zoom lens, but also have the pancake lens, making it a similar carry to the Ricoh, but as the lens is interchangeable, isn’t nearly as pocketable. Like the Ricoh, a newer model, the X-E2 is now available. The Fuji X-E2 runs $999 on Amazon. 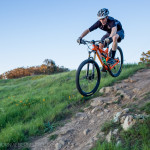 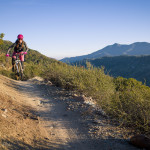 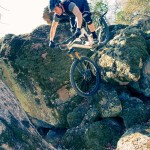 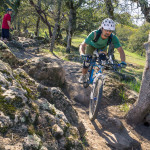 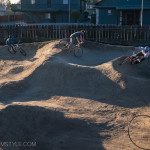 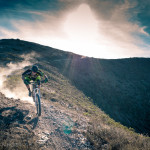 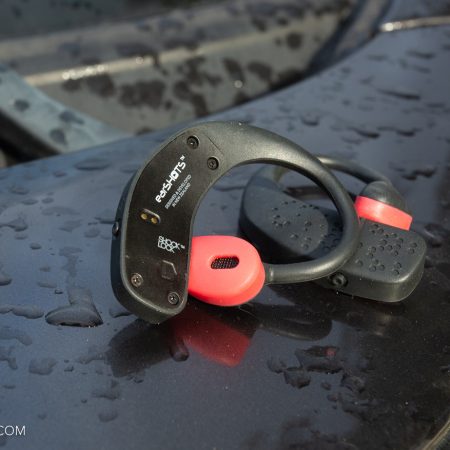