What the heck is the Status? Details on this elusive alloy FSR bike have been scarce, with our first glimpses being limited to social media. Was it a new alloy iteration of the Stumpjumper EVO?

But then the 2021 Stumpjumper EVO was announced, and it was clear the Status was something different. When additional detail arrived, they were limited to only European MTB media outlets, as the bike was never officially released in the US. However, they were here — riders on social media were posting photos of their new bikes; they began showing up on YouTube.. and what we heard made us stoked. The Status was designed to be an inexpensive no-compromise machine targeted to up and upcoming rippers. But the part we wanted to know more about was the return to short chainstays and a reasonable bottom bracket height paired with a longer, modern front center and aggressive go-fast geometry.

Features of the Status MTB

Combining DNA from the freestyle BMX realm (ie durability and short chainstays) to a modern front center with a wide range of reach options, a slack head angle, and climb-friendly 76º seat tube angle, the Status is aimed at riders coming into mountain biking from a freestyle biking or motorcycling background. The build features durable components, suspension, and chassis that can handle the rigors of freeriding (yes we still use that word) while coming in at a price point competitive with direct-to-consumer brands.

There are still advocates for jibby, grown-up BMX influenced geometry at Specialized, and it’s clear the wrecking crew in Morgan Hill have had good experiences with mixed wheel sizes as they designed the Status as a mullet, utilizing a 27.5″ rear wheel paired with a 29″ front.

Whereas the new EVO is a modern all-mountain trail bike with loads of adjustability, it was only available in carbon, with geometry similar to 29″ models from Norco and Transition. Focusing on high-level performance, the new EVO blurs the lines between all-mountain and enduro. These bikes are designed to perform, and in the MTB world, performance is quantified by racing and speed.

However, high-end performance will cost you, and the Enduro, the new EVO was only released in a carbon fiber iteration that comes with a penalty at the register. The base model EVO will set you $4,300. In comparison, the Status is much more accessible with a retail price of $2,600 (for a complete bike) which won’t even get you into a carbon EVO frame.

Specialized wasn’t sure what the reception to the bike might be — it’s a known fact that bike sales reflect 29″ wheels being the dominant mover at the cash register. To test the waters, the Status was released into a limited number of core shops in the US. In fact, they didn’t even do a product launch in the US, taking an alternative grassroots marketing approach and seeding the bikes to high-level riders coming from the BMX realm.

With limited quantities, these bikes are almost unheard of- made even more challenging as finding new bikes in the middle of the pandemic can be a hair pulling experience.

First Impressions of the Status

You get a lot of bang for the buck for $2,600. Unfortunately, the SRAM NX group, while inexpensive and durable, is not light. Having spent most of my time on a wide range of carbon bikes, it was hard to ignore the heft when picking up the bike. Putting the bike on the scale to verify, it was a bit disappointing to find it weighed 36.11 lbs with Shimano Saint (platform) pedals. Admittedly, Saint pedals are burly, and best suited for shuttle riding or lift-assisted parks, so I weighed it again without pedals to get a baseline weight of 34.88 lbs.

For the last few months, I’ve been riding the 2020 Stumpjumper EVO in the alloy, 27.5″ iteration, so I pulled its pedals and weighed it for comparison – my alloy EVO (with the Bermstyle Shimano build) came in considerably lighter at 31.24 lbs.

Putting the Status on a Diet

As I acquired this bike the old-fashioned way (this bike was never officially released in the USA) I’m not interested in testing the NX components. I’m excited about the frame and geometry.

Typically for our tests, we will often acquire a frameset and source components direct from the manufacturers for the build, but with parts being scarce as they are, we simply bought a complete bike to save time finding a reduced offset fork.

The first item of business was to upgrade the Status to the Bermstyle build kit, which we run on all of our bikes:

The goal: add performance, drop some heft and make the Status my own. Unfortunately, even with a lighter Spank 350 rear wheel and an XT cassette plus all the lighter parts, the bike still came in a bit over 34lbs with pedals.

As the Status initially weighed in at over 36 lbs with pedals, two pounds of heft dropped isn’t shabby. Removing the tubes and setting the tires up tubeless helped a bit, though, adding a Cushcore XC to the rear effectively canceled out the tube. The rear wheel currently has a Magic Mary rear tire mounted at the moment as well, which rolls slow and doesn’t help.

I have been on a few big trail rides on mullets; I even set up the Stumpjumper EVO with a 29″ front end to see what “too slack” might feel like. While that bike wasn’t the ideal platform to try the mixed wheels, other models felt much improved by mixing up the wheel sizes.

For some reason, mullets tend to be very polarizing with a lot of riders. (most on this in a separate post, in progress now) I’ve already engaged in several online debates, which I personally find a bit humorous as every point made is race-focused and performance-based, without referencing rider experience.

The most opinionated often also have the least amount of actual experience on the trail riding mullet bikes. I’ll just put this out there now — I don’t find mullets to be faster than a full 29″ set up on the majority of trails. Are they the ideal mix of both worlds?

The Status doesn’t care. In fact, it also throws out the idea that the longer rear center is desirable for race performance. This bike isn’t meant for racing. Instead, it speed and stability for a short chainstay, a slammed rear wheel that makes the Status ridiculously fun to jib, and the most easily manual-able dual suspension bike I’ve ridden.. since the Specialized SX I owned several years ago. The difference is the Status can be ridden in the mountains and more importantly, up them.

The Status isn’t an enduro bike, and it doesn’t pretend to be one. It won’t provide more performance for trail riding. Unless your favorite local trails look like this:

I do find them to be a lot of fun for much of the riding I like to do, which ranges from jump trails to steep double black lines.

Swinging a leg over the Status, the mullet configuration feels and rides noticeably different from the full 27.5″ setup; I definitely felt the front axle as higher than the rear. It felt fairly natural, but it was an intriguing sensation; the cockpit and riding position felt very similar to my 29″ bike (Transition Sentinel) while pedaling on the flat, but it was much easier to get the front end off the ground. And pedal wheelies were a cinch.

The best way to break in a new ride is to send it off some jumps right? So I headed straight to the jump line at the local bike park to see how the bike would perform on the downhill jump trail.

Right off the bat, I knew I made the right choice with the 140mm edition – it provided the riding experience I was hoping for. The front end felt planted at speed, but the bike didn’t feel bulky in any way. I did need to immediately stop and add additional air pressure to the tires – low pressure may be great for trail riding, but feeling the tires fold while railing a hardpacked berm was scary.

It wanted to take to the air, and felt light but stable while flying. The short chainstays feel super good off the lips, and the bike felt both lively while still confidence-inspiring.

The first real day on the trails took place at Syncline in Bingen, Washington. The trails here are littered with rocks, with some challenging chunk-filled sections, and the single track is often narrow and twisting, with the occasional off-camber.

While the climbs got done, on the second and third lap, the weight was very noticeable. The climbing position felt very similar to the EVO 27.5 and my Transition Sentinel, and you’re well positioned on the bike. I would have liked a slightly steeper seat angle, but 76º is still in the range of modern geometry. Sliding the saddle forward on the rails slightly and setting the bottom bracket to the high position put me where I wanted to be. While I felt I could drop the height of the bars slightly, it feels spot-on during the descents.

The descents… well, I was very impressed with how fun the bike was pointed downwards. The 29″ front wheel adds a lot of the “smashy-smashy” feel you get from a 29″ bike, and I was really enjoying the shorter rear center on the tight stuff. I must be in the sweet spot for height, as I was super stoked on the mullet setup, and while a full 29″ bike is faster, on the narrow trail with the tight and quick turns, I was nailing my little cutty lines all over; more importantly, I was having a ball. The additional heft of the bike did actually aid things here, and it was felt planted and tracked well.

Mixing wheel sizes offers an intriguing mix of maneuverability with that planted front end of a 29er. While it felt crappy on the EVO while climbing, it was like an ‘easy button’ when I was descending steep technical black lines. In comparison, the Status feels well balanced.

<added notation: frame size here is an S3 with the 462mm reach. Rider is 5’10” and prefers reaches ranging from 460-480 depending on wheelsize and use case.>
To be continued… 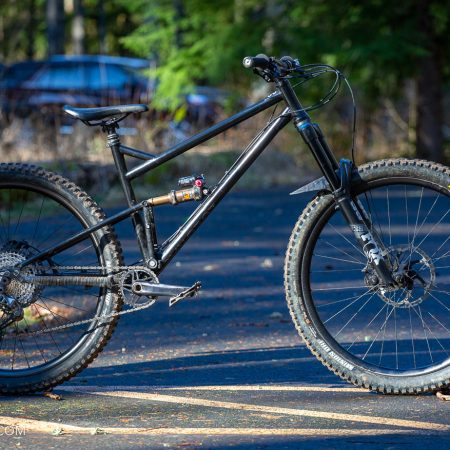 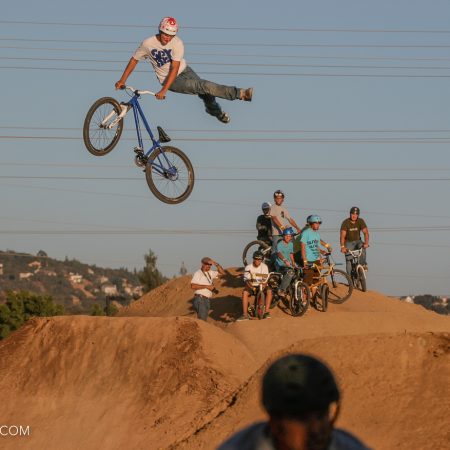