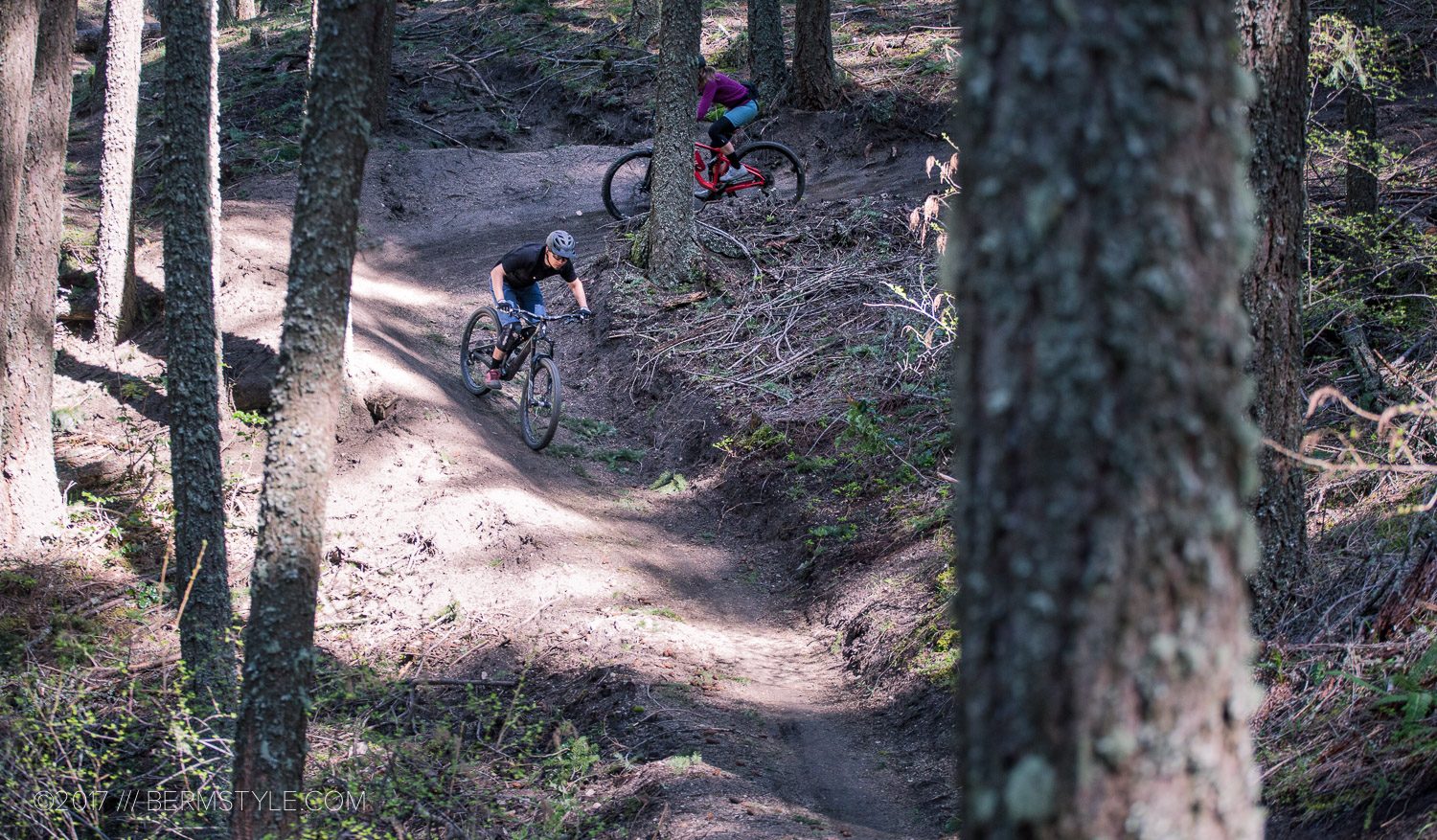 Dropping into the new Jabberwocky trail in Ashland.

When our pals at Showers Pass asked us to tag along with them on a road trip to the Sea Otter Classic this year celebrate their new partnership with IMBA, we were nodding our heads in agreement before they even finished their sentences. The plan: head toward Monterey; riding bikes and camping along the way while shooting sweet photos and footage of the new MTB collection. 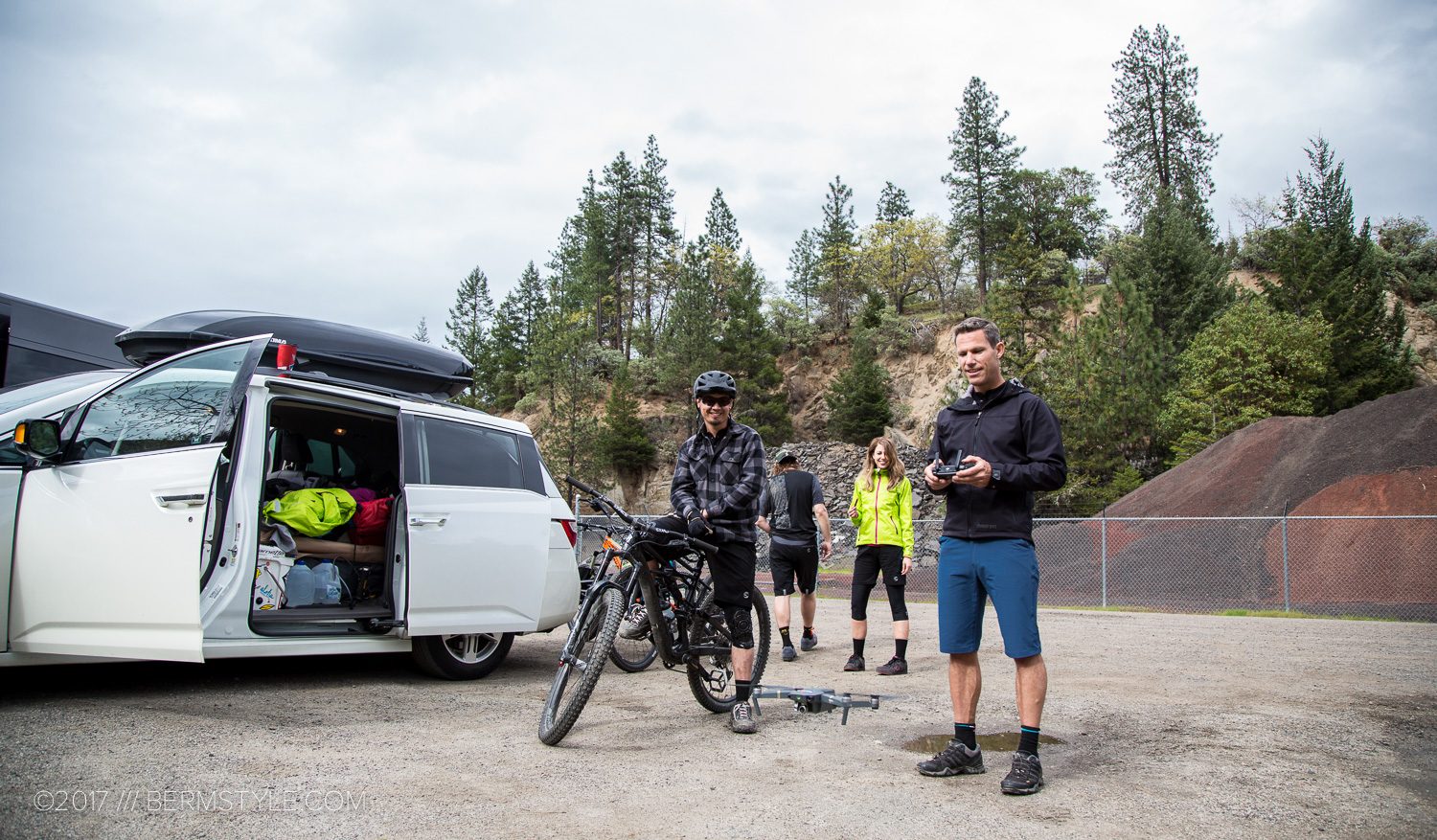 We’ll take any excuse to hit the road, ride bikes and shoot pictures. It’s kind of a thing we do. It also gave me a hard target date for getting the van conversion project road trip ready. We left a few days before the rest of the crew, and headed to my brother’s place in Medford, Oregon, where we spent the weekend riding bikes, racing RC cars on the backyard pump track and hanging out with the fam. 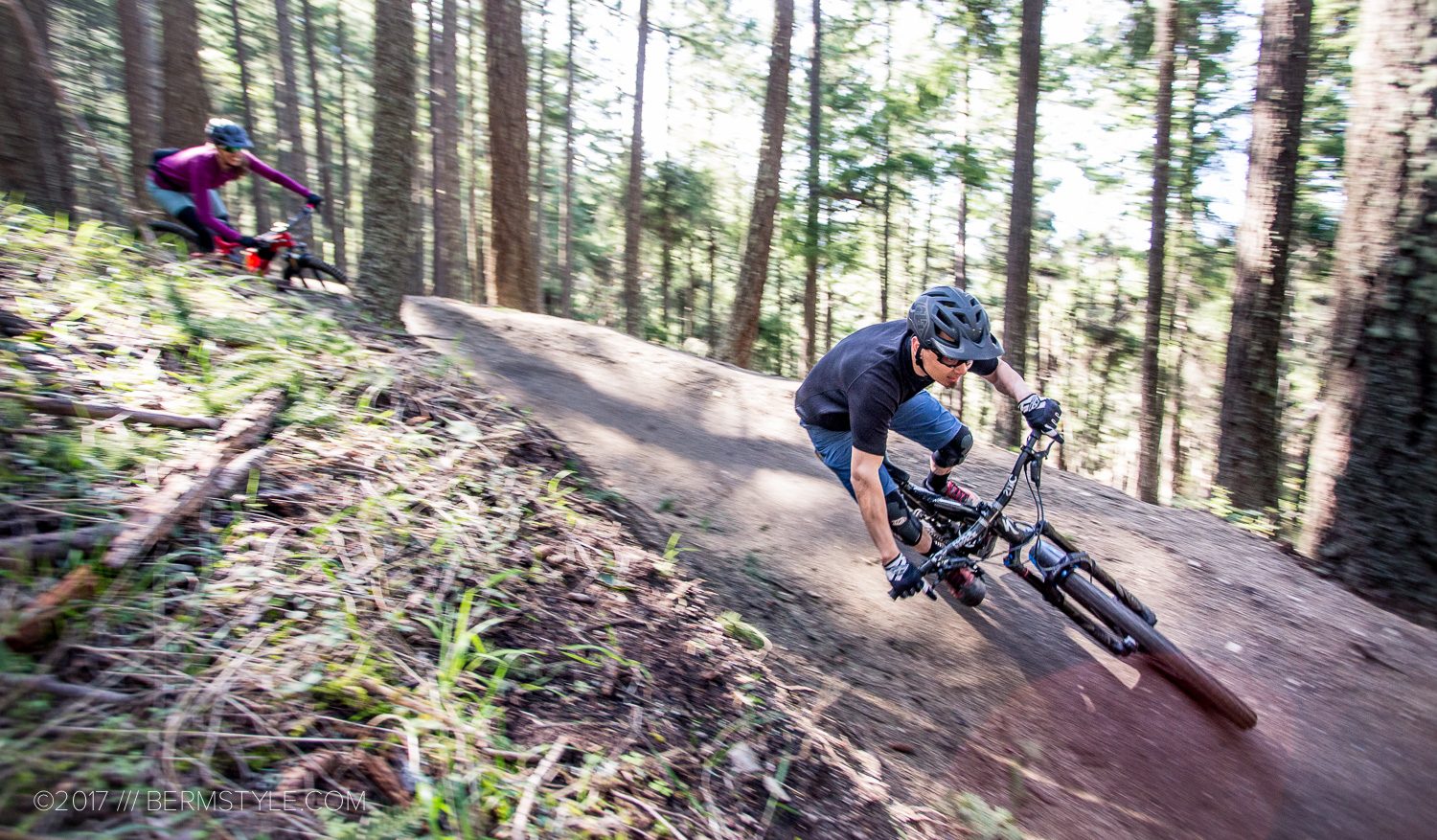 Izaak Van Horn leads the way through one of the many bermed turns on the new Jabberwocky Trail in Ashland, Oregon

The upper trails in Ashland are still under a layer of snow, and active logging operations prevented the usual winter Four Corners Shuttle, so we pedaled up from the Alice in Wonderland gate to ride Caterpillar, Lizard and the new and recently completed Jabberwocky trail. 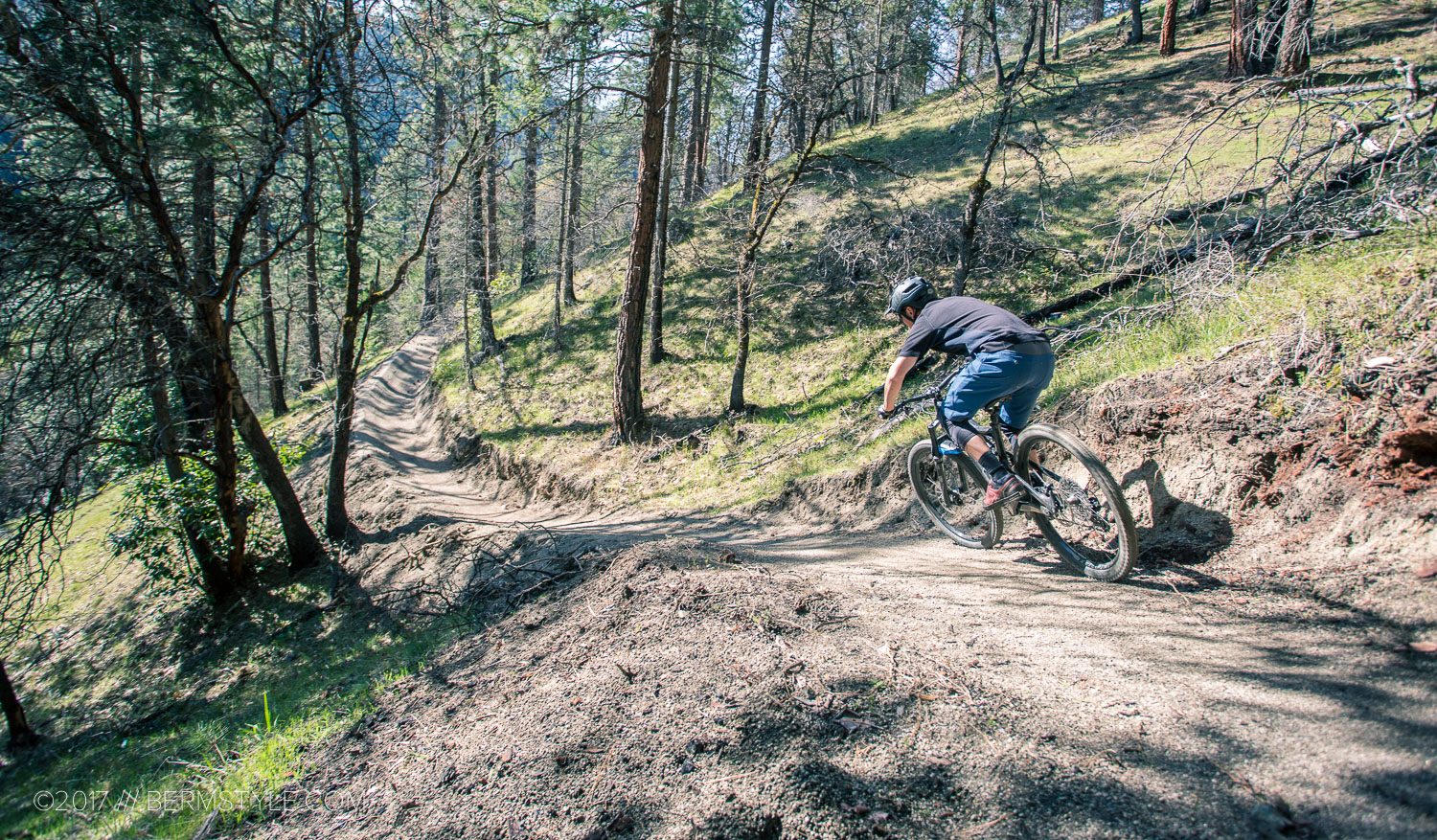 The lower section is wide open and fast. Bill explained that this section was designed this way intentionally, as the trail is designed to be ridden from Links into town, non-stop.

Bill and Co had hustled hard to get the new trail into the ground, but it was clear it was already getting a lot of use from the locals. Unlike the original Jabberwocky, the new trail is fully sanctioned, and now provides a new option to the BTI trail. Reviews of the new trail followed a similar pattern from practically everyone: 1. Stoke-age on riding a new trail. 2. Feeling that you were going to blow off the trail on some of the fast but small berms with exposure. 3. Stoke-age once you got enough runs in to know where you can pin it and where you need to cool it down a bit. 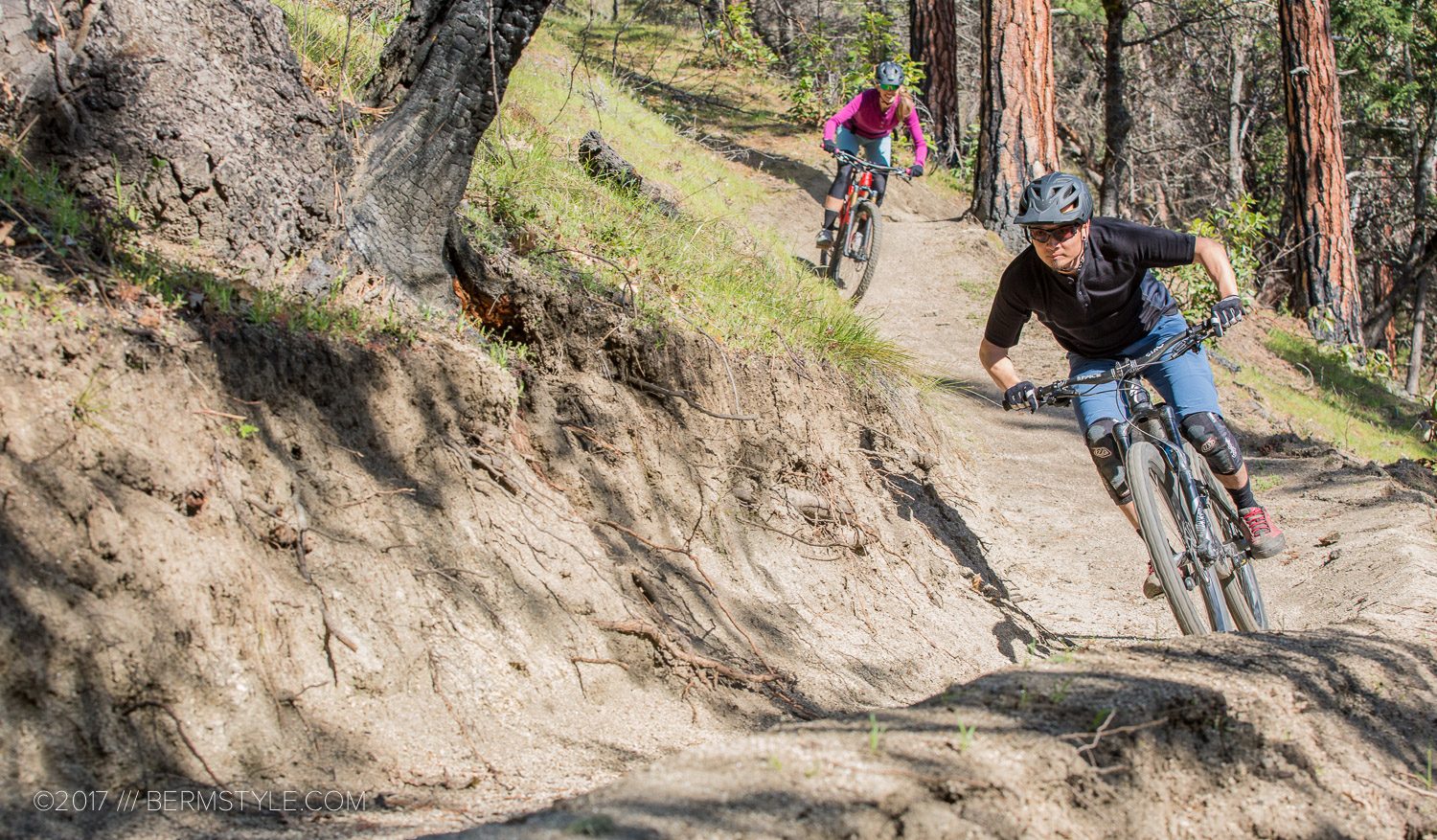 Monday afternoon we met up with the gang from Showers Pass, and we stacking bikes into the back of my brother’s rig, we headed up to take the gang for a warm up run down BTI. 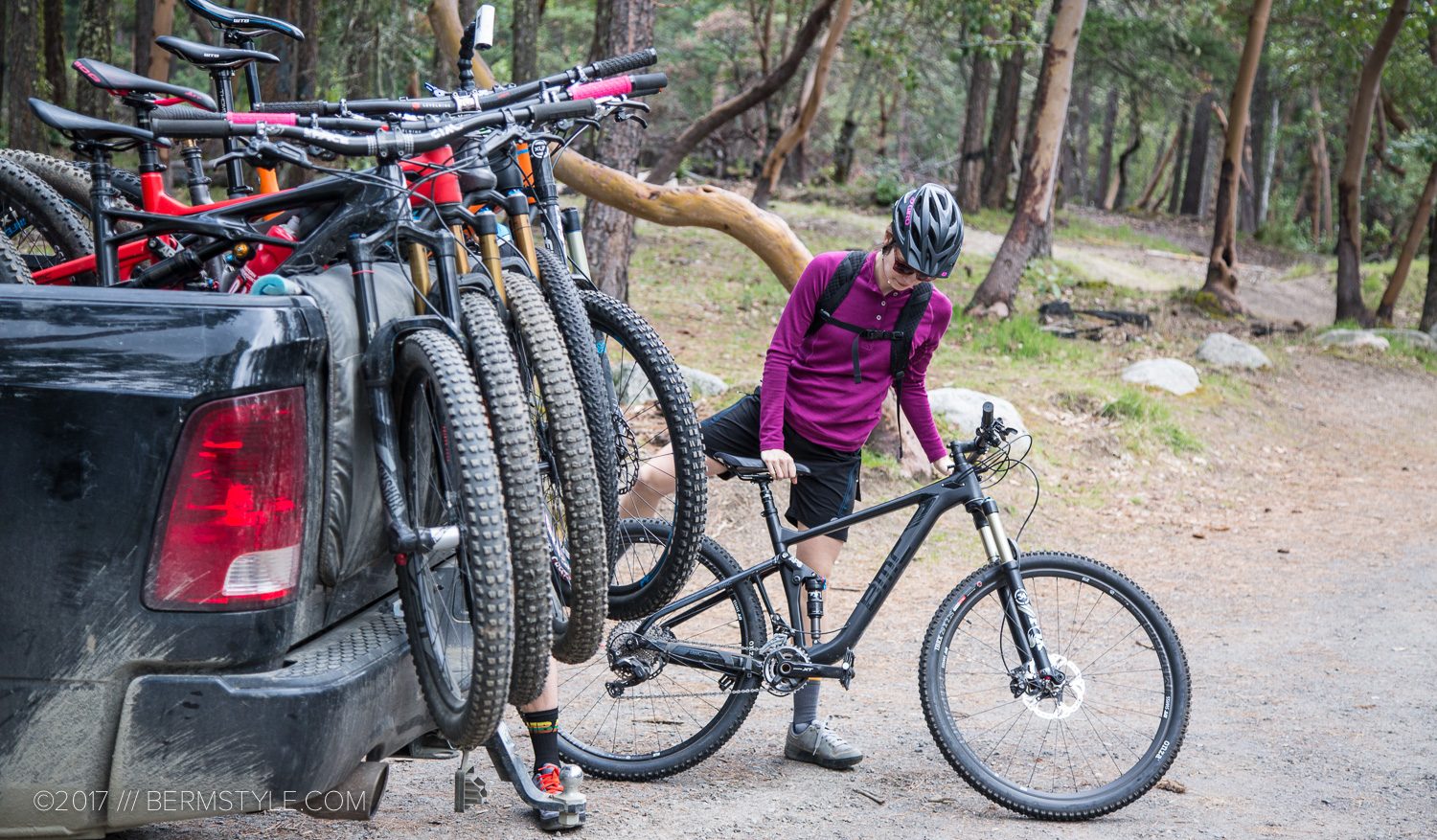 Stephanie from Showers Pass, getting ready to roll.

The gang was super stoked on the primo riding conditions, twisty flow and general radness that is Ashland. 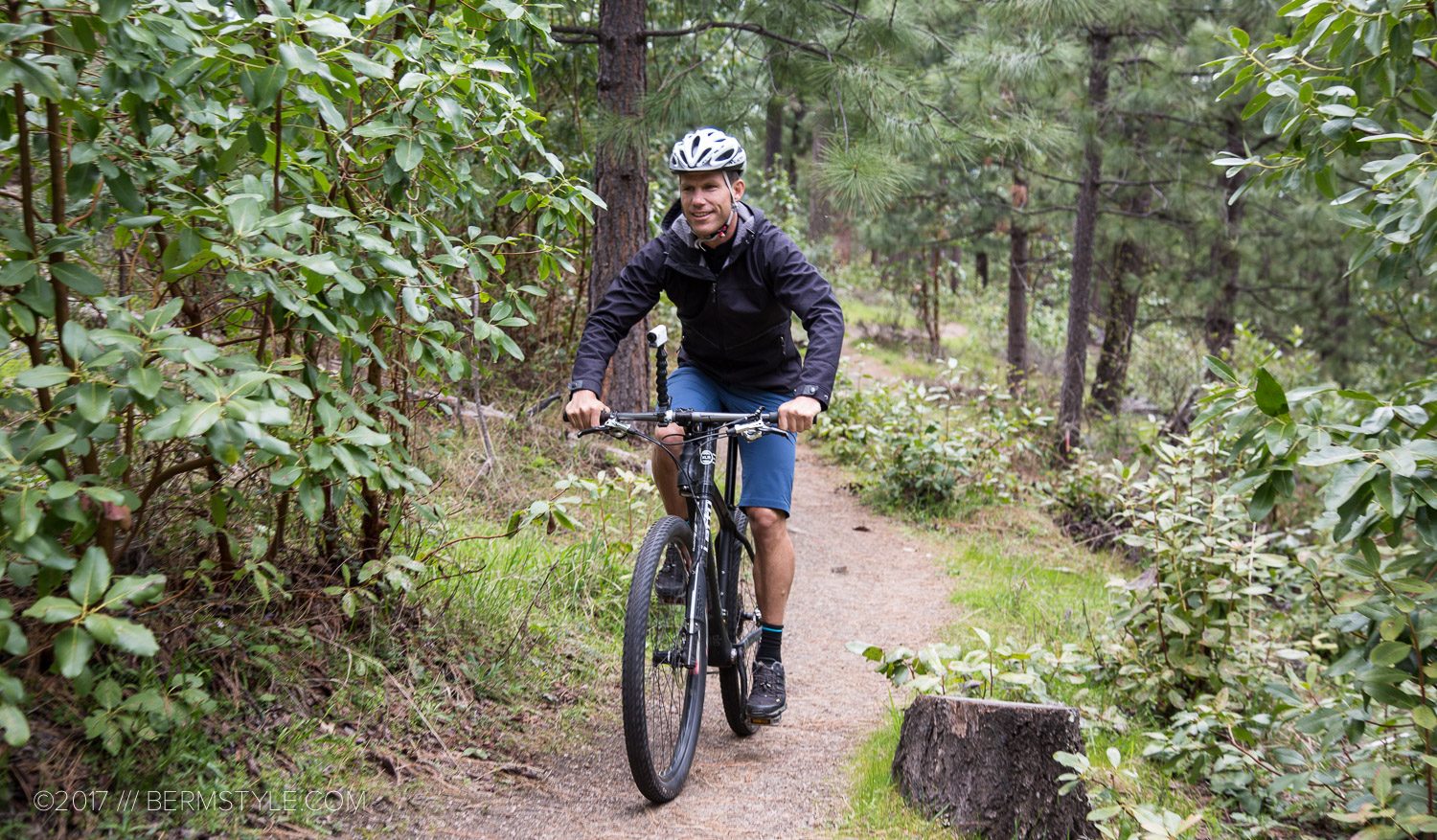 Ryan Van Duzer was rocking a Sony Action Cam for some POV and hand held documentation.

Until the worst happened: Jeremy stacked, and stacked hard. On the upside, Ryan captured it on video, as seen in the following video edit.

Unfortunately, Jeremy’s crash effectively ended our day, as he hit the ground hard, resulting in a trip to the emergency room. 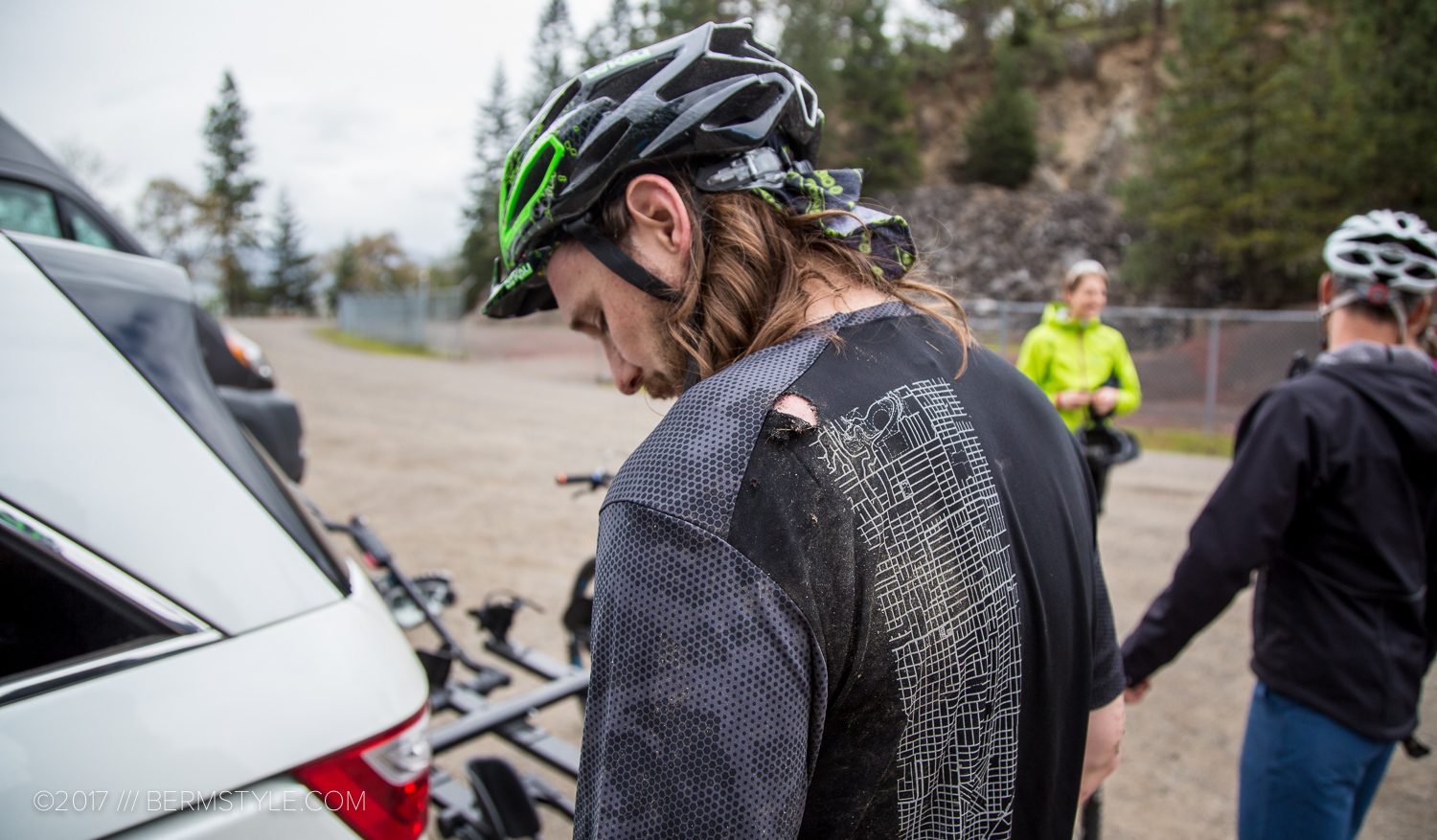 We’re not entirely sure how it happened, but based on the three completely blown out spokes in his front wheel, Jeremy slipped a pedal and stuck his foot into his front wheel while crossing a water bar, which effectively launched him into the air.

A few hours later, the hospital released him and we commiserated over drinks at a hotel bar and began putting up a backup plan together for the next few days.

The next morning we carried on, and though we didn’t camp as intended, headed out to the Emigrant Lake Campground to carry out our initial photo and video plans. The camp ground and lake is a perfect setting for hanging out this time of year, before it gets too hot and the green turns to brown. 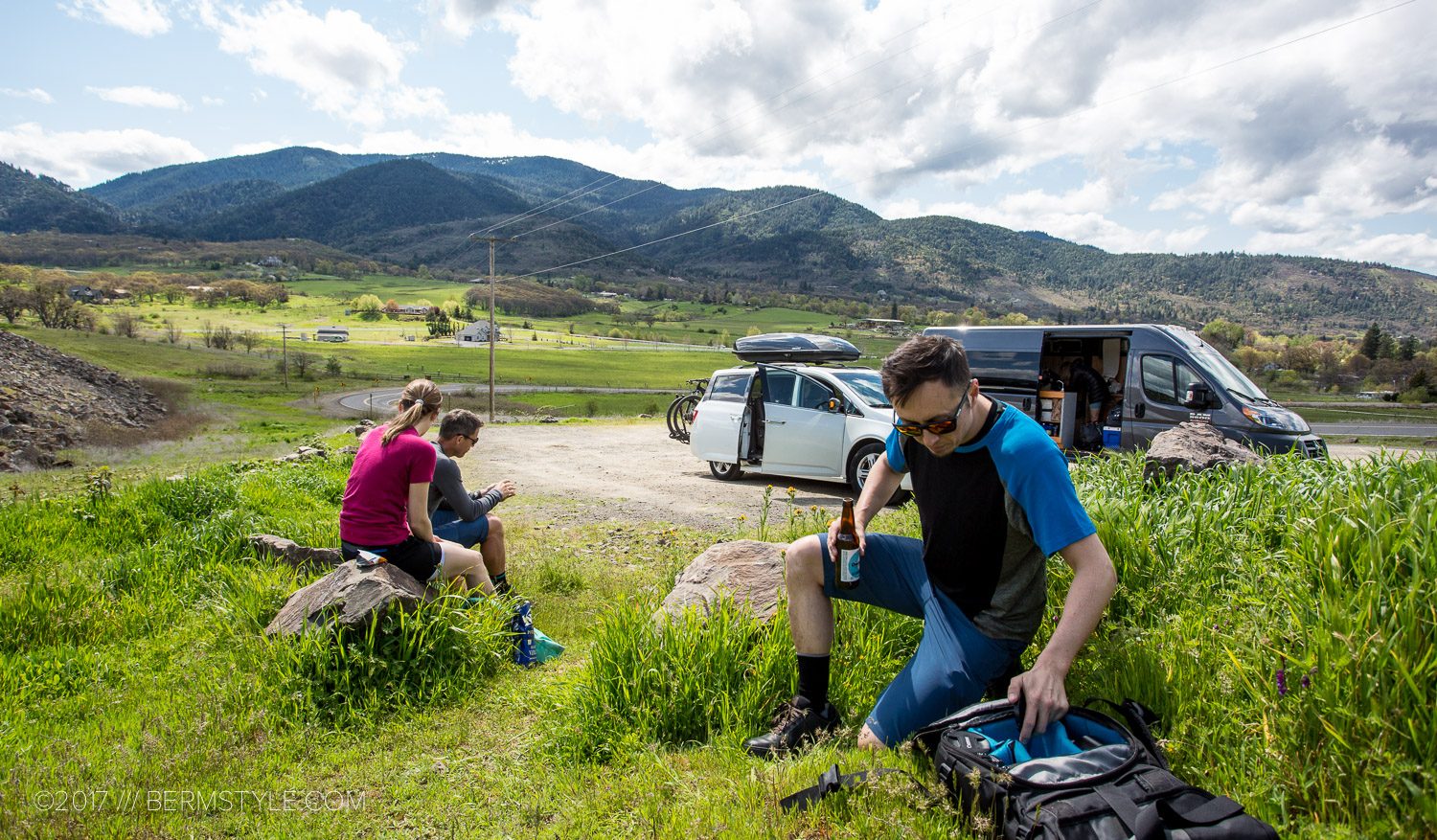 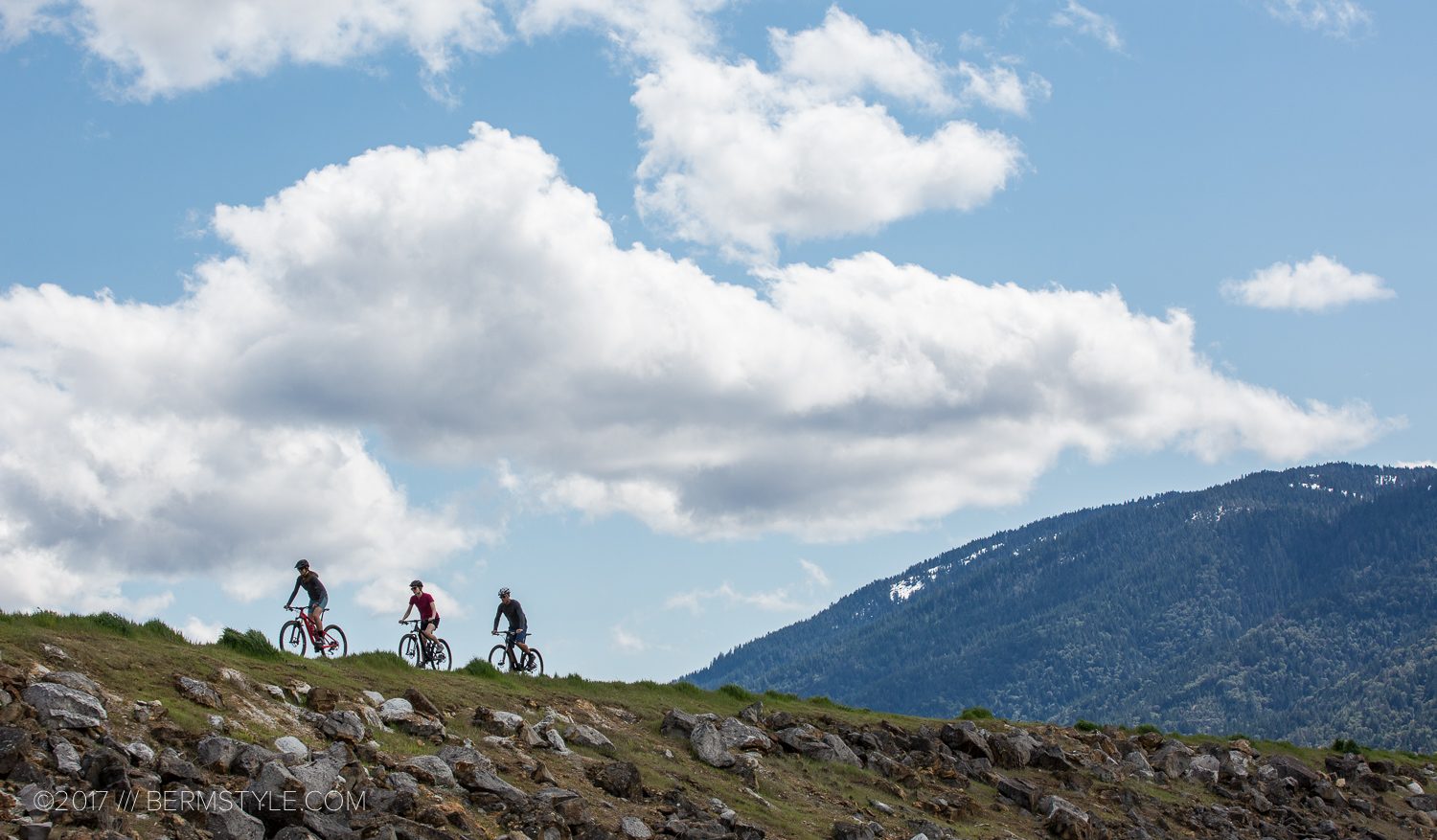 The views in Ashland are epic.

After the morning of photoshooting, we headed back to ride a bit more, give Ryan a tour of Lizard Trail and the new Jabberwocky, we loaded up and continued south toward Monterey.

Stay tuned for news on the new collection at ShowersPass.com