As far as advocacy groups go, Evergreen Mountain Bike Alliance has got it going on. Even if you havenâ€™t heard of them, it’s likely youâ€™ve read about what theyâ€™ve accomplished. Formerly known as the Backcountry Bicycle Trails Club, Evergreen is the advocacy group responsible for the creation of the first urban mountain bike skills park, known as the I-5 Colonnade. Tucked away underneath a dark and dusty section of the I-5 Interstate Highway in Seattle, Washington, the area was once littered with trash and a haven for drug use, as well as other questionable activities. Not any longer. With skills clinics being held regularly, the park is a destination for mountain bikers from all over Washington and further, looking to enhance their bike handling skills and play. 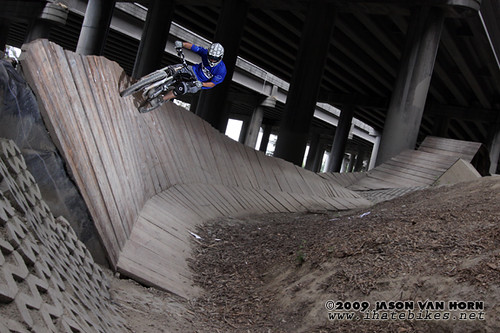 Jason Van Horn carves the wall ride at the I-5 Colonnade. Photo: JInga

While its location underneath the I-5 Freeway shelters most of the park from inclement weather, making the park ridable year round is the result of backbreaking hours of the volunteers that built the park. Countless hours went into the construction of various drainages, as well the various rock retaining walls that make up the interpretive skills building trail. And that doesn’t count the time and labor hours that went into the skills features and jumps. As the local soil is extremely dry and dusty and lacks cohesion, most of the jumps and landings had to be armored by placing cinder block in the tread, one at a time. A lot of work went into the construction of the park, and all of it was done by volunteers. 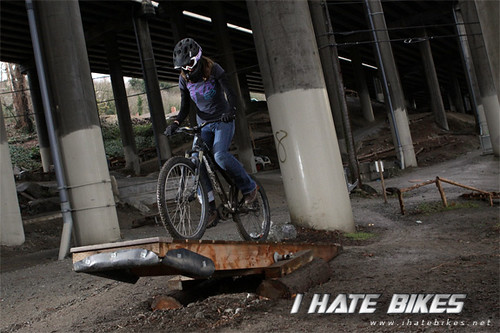 Much has been written on the Colonnade, and everyone that visits is extremely impressed- the scale alone of the space is something that has to be seen to truly be appreciated. 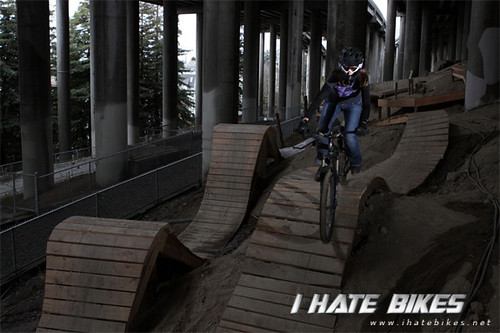 Evergreen was careful to include and offer features for riders of all disciplines to enjoy. From tight switchback turns, log rides and skinnies on the tight and twisty XC Limestone Loop, to the jumps, berms, chutes and wall rides in the advanced area, there is a feature for any type of rider, on any style of mountain bike. There is even a pump track and a trials area. 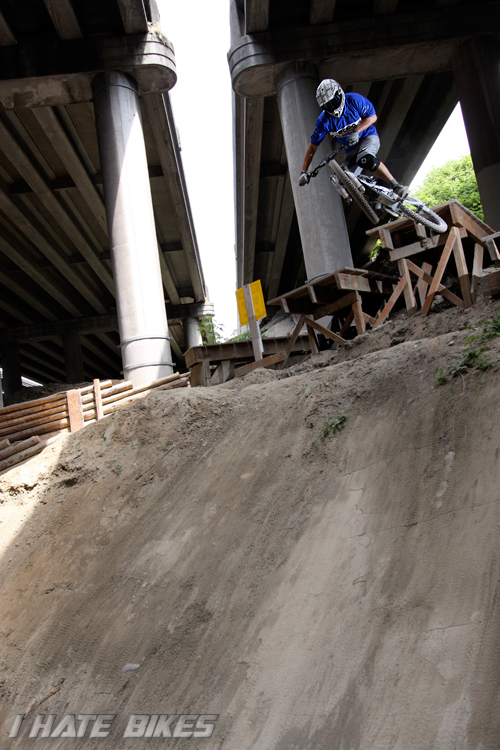 The club hasnâ€™t rested on their laurels though. While committee has successfully partnered with the local land manager in reopening a trail network called the Paradise Trails to mountain biking, (a huge coup for local area riders that utilize the spot for frequent after work rides) Mike Westra, one of the Trails Directors in charge of coordinating the efforts at the Colonnade, has moved on to phase two- a little project called Duthie Hill. Maybe not so little. While not as close to the urban center of the Seattle area, the Duthie Hill Mountain Bike Park will be a huge addition to the Seattle riding scene. A new trail system in progress, the Park is conceptualized as a variation on IMBAâ€™s stacked loop trail model, but shaped like a clover leaf. An intermediate all mountain trail forms the outer loop, with frequent jaunts back in to the central area, which will eventually form the basis of an event staging area. Jump and flow lines, as well as downhill, freeride and dual slalom runs will fill the inner loops. Evergreen has big plans for the area, with a vision of being able to host events and races of almost every variety. 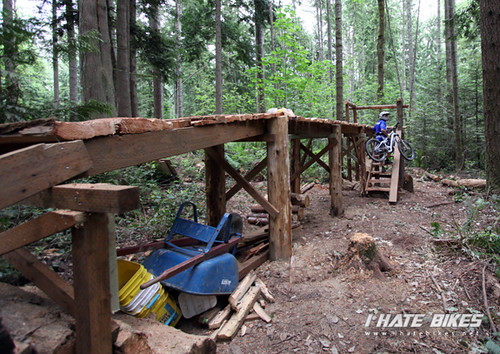 The starting ramp TTF on one of the flow lines at Duthie Hill. Photo: Inga Beck

The Duthie Hill project has come together as a effort between a number various volunteer groups. One group, the Dirt Corps, goes so far to have their own race team and identity, complete with a web site. Like the other groups involved in the project, theyâ€™ve adopted a section, and are working to construct their own progressive jump line. Starting off with an elevated ladder section, it progresses into bigger jumps, step ups and hip jumps. While Duthie Hill is currently under construction, many of the jump and flow lines have sections that are already ridable, and many of the features and TTFs are already in use. Numerous practice and skill-building features are planned, and you can be sure that when the project is complete, the Seattle area will become that much more of a haven for mountain bikers. 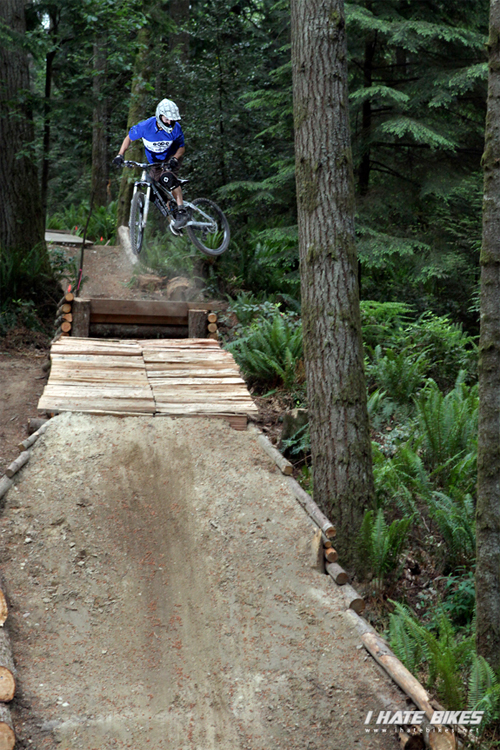 Jason Van Horn whips it good on a step down jump at Duthie Hill. Photo: JInga

Video: The Colonnade Story by Bones Over Metal:

For more about the I-5 Colonnade, click here
Click here for more information on the Duthie Hill Bike Skills Park