Santa Cruz released their newest bike the 650b Bronson this April and I couldn’t be more excited about having one of my own.  For years I’ve been riding a 2008 Nomad; mainly because I haven’t found a bike that could dethrone it for me. (the Blur TRc was just about to) I’ve ridden a few 29ers but never got into them because I felt like I was riding between the wheels rather than on them. When 650b bikes started to show up I became really interested and had the opportunity to demo a few of the new rides out there between February and March.  I liked the wheel size and how it rolled over stuff on the trail. I also noticed that I didn’t suffer much of a penalty on cornering. However, none of the bikes rode like my Nomad.  Then came the Bronson.

The Bronson resembles the Blur TR in its geometry but has a longer wheel base due to the bigger hoops. Like the Blur Trail, it features a low bottom bracket height and relatively short chain stays. However, the amount of suspension travel is more along the lines of the Blur LT, which this bike effectively replaces. However, with the 67º head tube angle and larger wheels, the Bronson feels as capable as the Nomad it replaces. This bike was designed around the wheels and doesn’t at all feel like the wheel size was an afterthought. Riding the bike it feels very balanced and stable feel making it easy to get moving fast both up and down. Climbing it feels very much like its siblings the Tallboy or Blur.  The seat tube is half a degree steeper than the TR at 73 degrees, putting you more in the center of the bike than the Nomad. Standing, the bike feels like the Nomad; I don’t even notice the slightly shorter travel and absolutely dig how this bike handles on descents. The head tube angle is identical to the Nomad which explains why it feels so similar.

I do notice the slightly bigger wheels in a few instances:

In all, I think the wheel size is a win for how I ride! 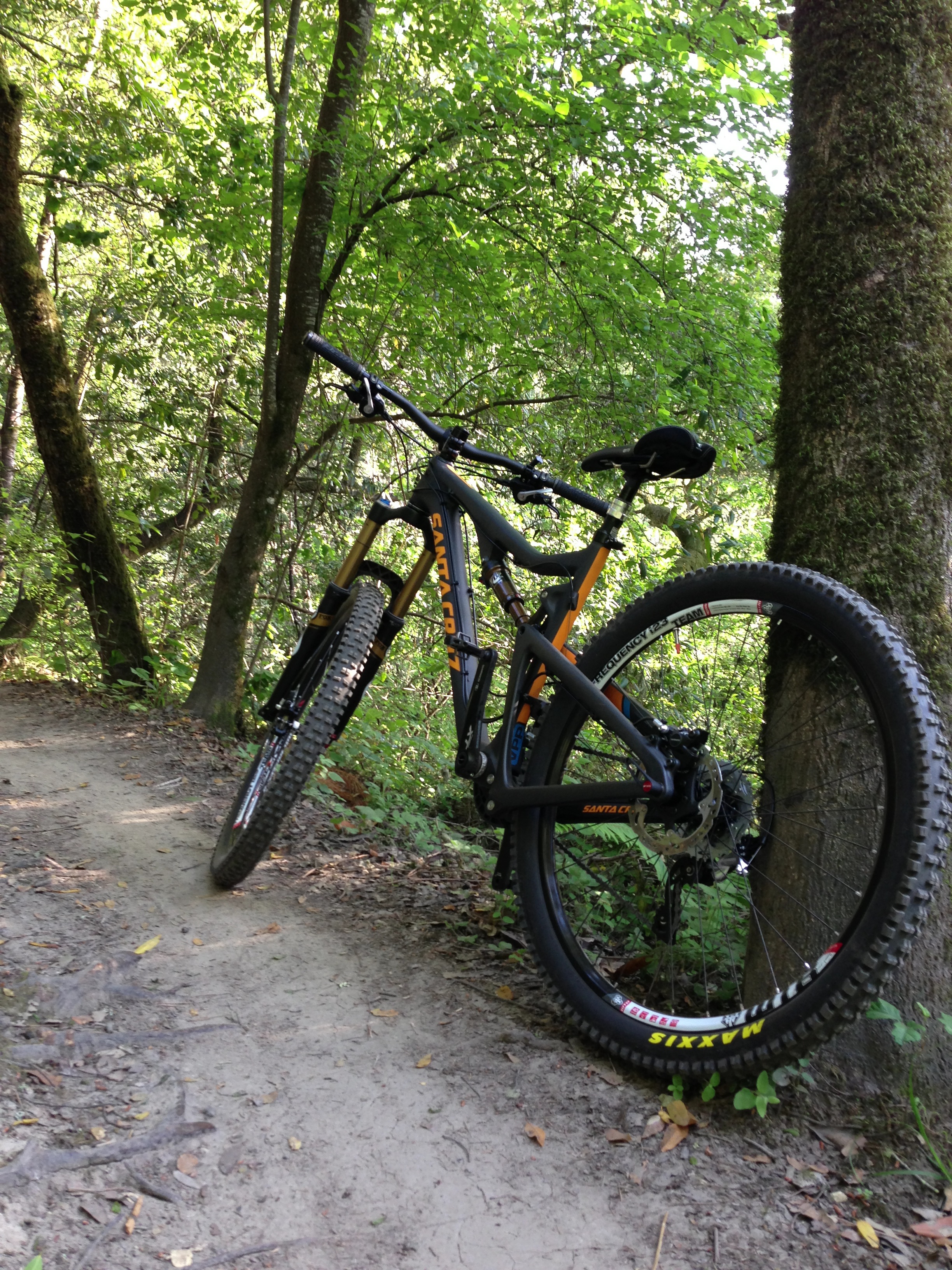 Breaking her in on the Delaveaga Trail – Santa Cruz

This Bronson was came with the factory decked with a factory build kit: ($6104 MSRP)

Personally, I’m a Shimano guy. I’m really pleased with the 2×10 setup on this bike. The 26/38 front chain rings are well matched to the suspension, and you don’t get any funny bobbing when cranking up a climb like you may have experienced on the older VPP designs.  The newest revision of the XT cranks are solid and fairly light weight. I would have preferred a 170mm crank arm as I’ve been riding that length for years and prefer the length. (I did have a RaceFace SixC crankset sitting at home waiting for this bike, more on that later). I’m totally stoked that the friction plus technology has trickled down to the XT line. The clutch derailleur combined with the E Thirteen TRS+ makes this bike ridiculously quiet defending and impossible to lose your chain on rough sections.

Setting up the shifters during the build was a funny experience. I must admit, I haven’t run the new 2×10 yet and didn’t realize that there was a selector to set the shifter between 2 and 3 up front.  Luckily, Curtis with Santa Cruz was curiously watching me build this bike up and came over and gave me the pro-tip. Otherwise, it will totally over shift dropping the chain on the outside of the big chain ring. Doh!

The new XT brakes paired with the metallic pads were a bit too grabby for me. I’ve known that has been a discussion point going around and I’m not sure why the metallic pads would be the default when the resin pads stop great for a majority of people and give you far better modulation. Ultimately I ended up swapping my Hope Tech X2 brakes over to the Bronson as I just love how those brakes feel. This again is a total personal preference.  If I didn’t already have the Hope brakes, I would definitely be running the XTs with resin pads.

The wheels that come with the bike are, well, ok.  The WTB i23 rims come setup to run tubeless with the rims already taped.  The i23s are mounted on DT Swiss 340 hubs. This is where my disappointment with the free hub came in. Coming off my Nomad, I had an engagement of 5 degrees, which is great when you’re climbing in low gears through a technical section. When you go from that to the 20 degrees on the stock 340, it’s almost unbearable.  I know you can purchase a new star assembly that will drop that down but it would be nice to have out of the box. Sure, I’d love to have the Enve wheel set, but for how I ride and my budget I just couldn’t justify it.  That said, I did entertain the thought— don’t get me wrong!

One highlight of the build is Rockshox’s Reverb Stealth adjustable height seat post.  I’m really pleased with the internal routing of the seat post hydraulic line. It doesn’t run internally the entire way, just where it’s important—  up the seat tube.  It enters just above the bottom bracket.  Once our handy guy Curtis showed me how to use the special connector attached to a derailleur cable housing, it was a breeze.  He even showed me if I did it just right, I wouldn’t have to bleed the line. (THANKS CURTIS!) The seat post works well and the bonus of not getting the cable stuck in my rear tire on a chunky section is a definite bonus!  Santa Cruz includes grip paste with their bikes but I opted not to use it.  (So far no slippage after 4 weekends). I would have preferred to put the adjustment control under the bars to protect it but its not feasible since I have shifters there. If you run this bike as a 1x whatever, you can totally do it.

People often ask me what they should do to their bike to make them faster. My reply: tune your suspension! I come from a number of years of riding dirt bikes and the ability to dial in that suspension is incredible.  I was really happy with my older Fox 36 with the high and low speed compression adjustments. In the rear I ran a Manitou ISX 6 which was itself almost too adjustable.

So jumping over to Fox’s CTD setup was honestly a bit odd for me. Basically, you set your rebound, then use the Climb, Trail, and Descend to set your compression rates. If you get the Factory line you get an additional three settings for the trail adjust to tune it a bit finer. There is something to be said about simplicity.  So far, I have no complaints and I’m actually quite pleased with how well the suspension works with this bike.  My Nomad took me a while to get things dialed in. This took me a few rides and I haven’t really had to think about it.  (I had the added bonus of hanging out with one of the Fox techs for an evening)

In summary, I think Santa Cruz has built an excellent bike. For years I stayed with my Nomad because I liked how it descended and I suffered a penalty on the climbs because of that.  Now I feel like I’m getting everything the Nomad gave me, AND I can pedal it up fairly easily. It may not be the bike for everyone, and honestly, no bike is. If you haven’t had the chance to check on out, get out to a demo day or come find me down in SoCal 🙂