During a meet and greet for our Subaru/ IMBA Trail Care Crew visit to El Paso, Texas, we became acquainted with Jamie Robertson, a local freerider and president of the local Freeride club, Roughrider Racing. It turns out they held a freeride event just the week before at their club’s riding spot, Roughrider Canyon. After hearing about the trails there, we eagerly accepted an invitation to join them for a session on Sunday.

We got a bit of a late start on the way out of town, but thanks to excellent directions from the crew, we sighted the windmills in the mountains that signaled that we were nearing our destination. Roughrider Canyon (located on private land that the club has permission to build on and use) is located approximately 40 minutes east of El Paso. They have a pretty sweet deal going, as the only other users of this incredible area is a local rock quarry and the company that run the windmills.

After we met everyone, we geared up and loaded our bikes in the back of Jared’s truck for the shuttle to the top of the canyon. 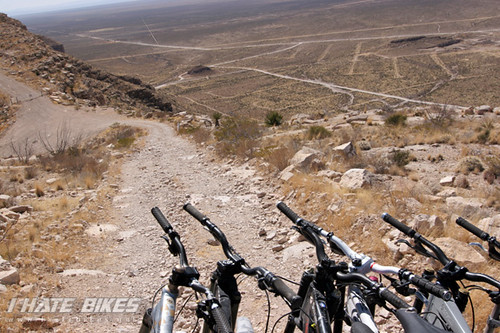 The view toward El Paso, on the shuttle road to the top of the canyon. Photo: Jason Van Horn

The rim of the canyon was assessable via a fire road that had some burly sections- anything less than a 4×4 was going to have problems. The view from the ridge line was spectacular, offering panoramic views of both sides of the canyon.

During our meeting with the local bike club, we were informed that all the trails in El Paso were rather technical- in fact, one of the issues they had was that they lacked true beginner trails. (and also one of the reasons they requested the IMBA visit) The beginner trails in the area are intermediate trails most other places, due to the technical nature of the rocky terrain. Not only that, Roughrider Canyon had the rockiest, most technical trails around. Of course, being who we are, we had to check it out. This was to be my first DH ride on my new Trek Session 88– turns out she was getting pushed to the limits right out of the gate. 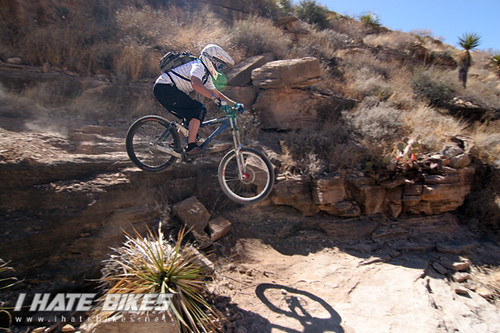 Steve drops one of the many rock shelves on the way down the trail. Photo: Jason Van Horn

Jamie described the first trail, known as “Screaming Naughtiloid,” as ‘pedally’ as it followed a rock ravine down the mountain. Set on bare rock, this trail consisted of rock gardens and drops- riding it was a blast. You would drop a series of shelves, landing on strategically placed rock while dodging cactus. From IMBA’s sustainability view point, it is a great example of how to build a challenging freeride line that would hold up to nature and the users.

Much of the trail went over large rock gardens, and maintaining momentum was essential to cleaning these sections. Getting the speed to bang over the large boulders was a challenge, as we stopped to identify key technical lines before charging them. (though these ended up being perfect times to pull out the camera) 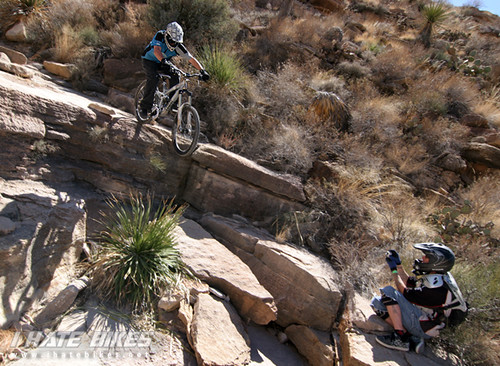 This proved to be my favorite trail of the day, as it took an aggressive riding style and the right line to make it down to the bottom smoothly. I was hoping for a second run down this trail, in order to link it all up and seriously pin it, but time didn’t allow for it.

On the second run down the canyon, the guys took us down “Bandito Borracho,” their “beginner-slash-expert” trail. This trail quickly became steep and loose, with a slim margin for error, and high penalties for crashing ..Riding the steep and loose rock line ended up being an exercise in what I called “aiming for the friendly rocks and avoiding the mean looking ones.” At one point, I got on the wrong line and bailed. I wish I hadn’t- The rocks were not friendly. I had a minor bail, but somehow scratched up half the components on my new bike. Dang. 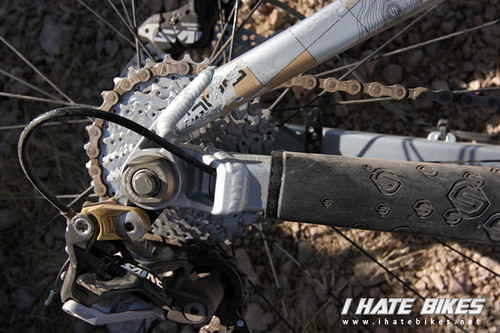 After our second run, we took a look the some of the stunts the guys have built up in an area they call the “Drop Zone,” as well as a jump line. They had a few big ladder/ booter step downs, a 30 foot canyon gap, as well as some more drops that we sessioned until the sun set. They were a great bunch of guys and we were stoked to have gotten the tour. 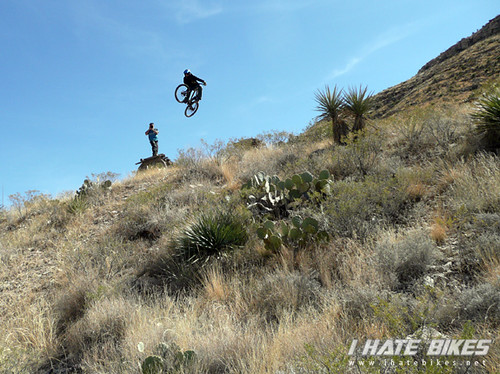 Carl goes big at the top of the Drop Zone. Photo: Inga Beck

Roughrider Canyon is set on private land, and as such, is not open to the general public without prior permission. However, if you contact the Roughriders at their site, and they will be happy to show you around next time you visit El Paso. They also plan to hold additional events in the near future. 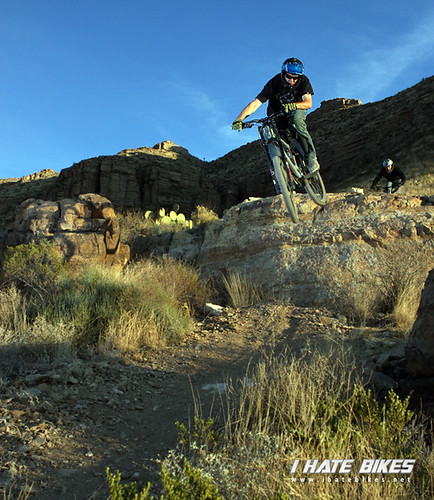 The boys run a train down the Drop Zone. Photo: Jason Van Horn.