The Pacific Northwest has a lot of great mountain biking opportunities, but mountain bikers attempting to minimize their carbon footprint are out of luck. When we get ready to head out to hit up some trails, we load up the car, and prepare to hit the highway first. Some days I’m not too crazy about having to drive a car just to ride my mountain bike. Unfortunately, it’s just part of living in Portland.

The city of Portland has a serious lack of bike friendly natural surface single track trails. The BTA, a local bicycle advocacy group, has had enormous success in creating a popular system of paved bikeways that connect many parts of the city, making Portland a fabulous city to be a road cyclist. But what if you’re a mountain biker? Unfortunately, as a mountain biker, you aren’t so lucky- off road options are sorely limited. In fact, there is really only one destination within city limits that features the single track experience that mountain bikers crave- Powell Butte. 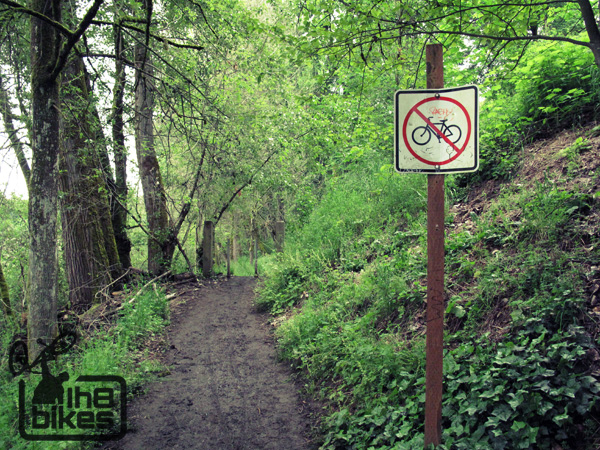 Your bike riding presence is not desired at Oaks Bottom.

I lived in Portland from 1998-2003 before returning a few months ago. It’s been at least eight years since I’ve been out to Powell Butte. I’m sorry to say that the Powell Butte I used to ride back then was a lot better than the Powell Butte that exists today.

Like the rest of the mountain biking in the Portland area, riding opportunities here have decreased. However, it remains as the only single track destination within city limits.

With all the crappy rain the northwest has received, we haven’t been riding much in the way of single track the last few weeks. The trails have been hit hard, (see the Sandy Ridge Closure) and to be honest, I’m getting really tired of cleaning my bike every time I ride it. When we had our first break during a long stretch of rain, we elected to put some miles in, and decided to stay local and revisit Powell Butte. 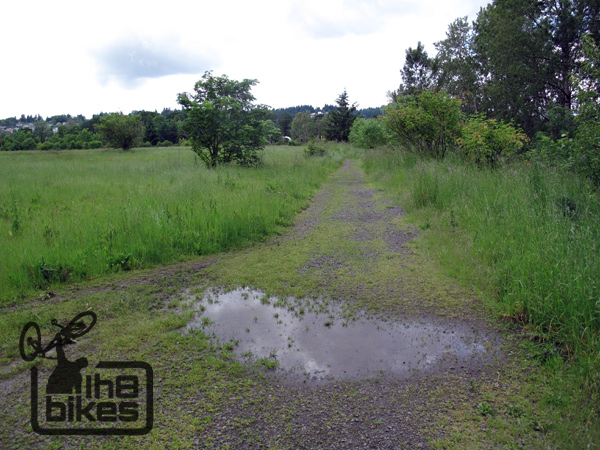 This “trail” in the same area in Oaks Bottom on the other hand you can probably get away with.

But is it progress? I remember back in the day, when we were looking to get a fix of dirt riding in, after we closed down the bike shop, we would head in that direction and ride single track. Almost all the way to the Sellwood Bridge. We even had some dirt jumps hidden away past the railroad tracks. It may not have been legal, but it was there, and it was fun. Now there is an official bikeway, but natural surface trails apparently were never part of the equation, or the bike plan. Some of the trails are still there, but they are as unfriendly to bikes as they have ever been.

Either way, riding your bike on the 10 miles of paved trail to reach a few miles of legal goodness is a solid work out. After a good amount of pedaling along the stretch of pavement, we reached the turn-off that marked the entrance to Powell Butte Nature Park from the Springwater Corridor. 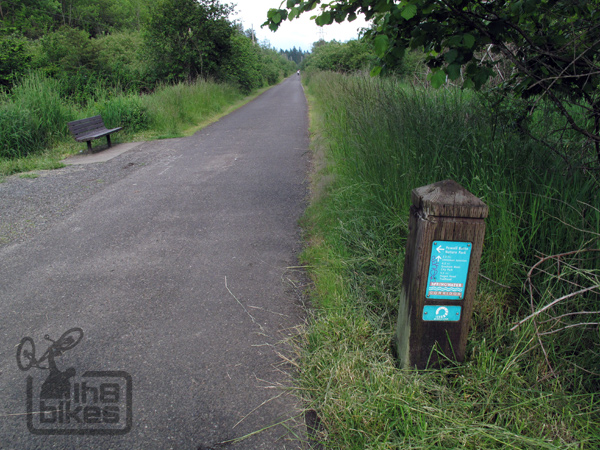 Turning off into the park, you have two legal directions to follow. I think. The signage is confusing at times, even when referring to the map posted on the site. 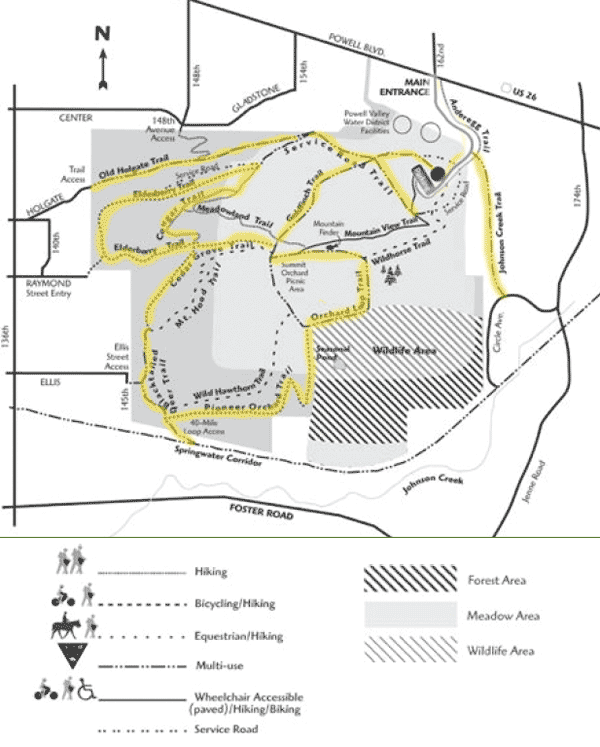 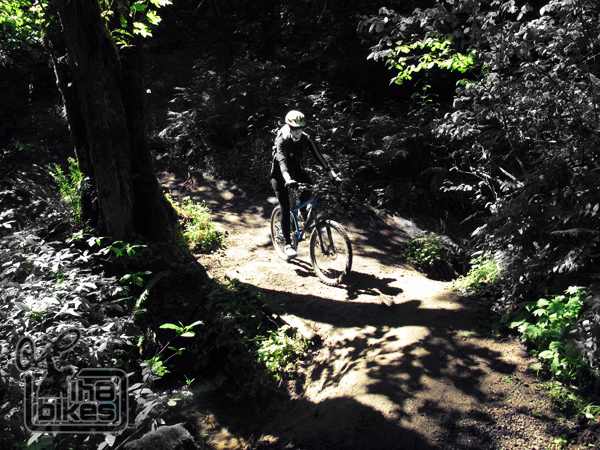 Powell Butte is currently undergoing under a transitionary phase. Hopefully for the better, but with many of the formerly multi-use trails being closed to cycling use, the remaining bike friendly trails are getting hit hard with the concentrated use. 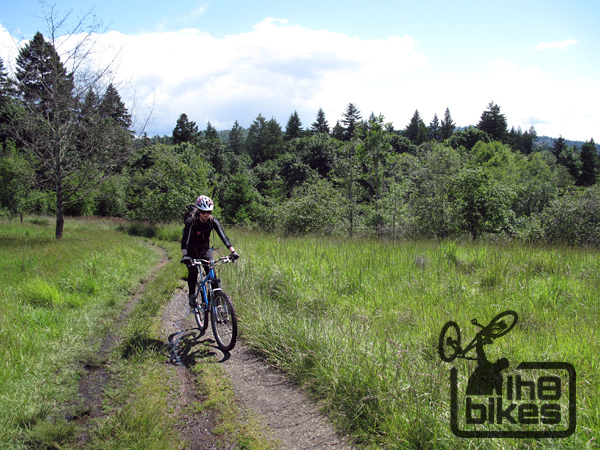 Out of the woods and into the meadow. Note the erosion down the middle of the trail.

Apparently this is in the process of changing. The Northwest Trail Alliance has been active in partnering with the Portland Parks, and according to this map of proposed reroutes, things look very promising. By rerouting sections of fall line trail like the one Inga is riding above, the trails would not only drain better, but by utilizing contemporary trail building practices and killer flow, the riding could be pretty kick ass. Assuming the Nazi-like anti-bike forces don’t take over and outlaw fun. 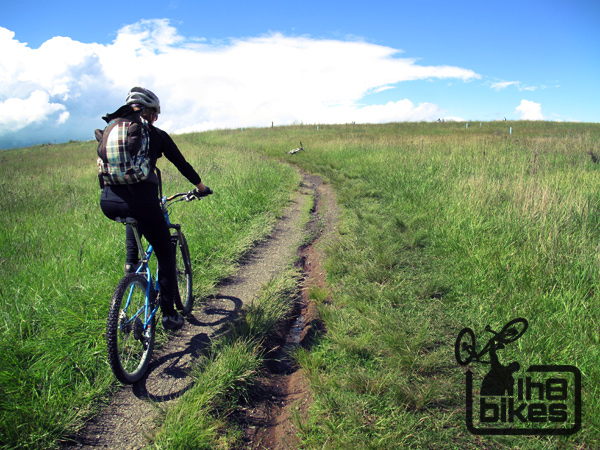 Inga pedals up through the meadow on a section of trail that breaks every trail building rule in the book.

Imagine many of the unsustainable existing trails revised to flow like the popular trail Hide and Seek in Sandy Ridge. Even if there were only 10 miles of trail, it could be awesome. Hide and Seek is only four miles long, and riders were riding that trail into the ground. 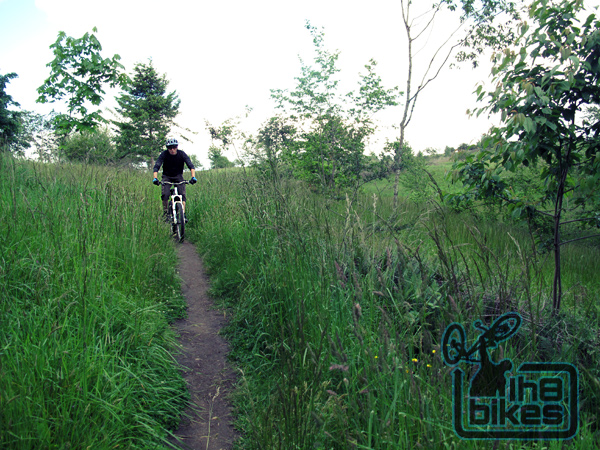 One of many straight line sections through the meadows of Powell Butte. Photo: Inga.

There is quite a bit of construction going on at the moment, as reservoir construction is currently underway. The park is still open to the public, although a large portion of the park is closed off with fencing around the work zone.
Learn more about the history of Powell Butte here.

After we took a lap or two around the park, we descended back to the Springwater Corridor to pedal the 10-12 miles to our home in the southwest. On the way out, I had to stop and jib this natural table top- the only thing I saw resembling a jump all day. 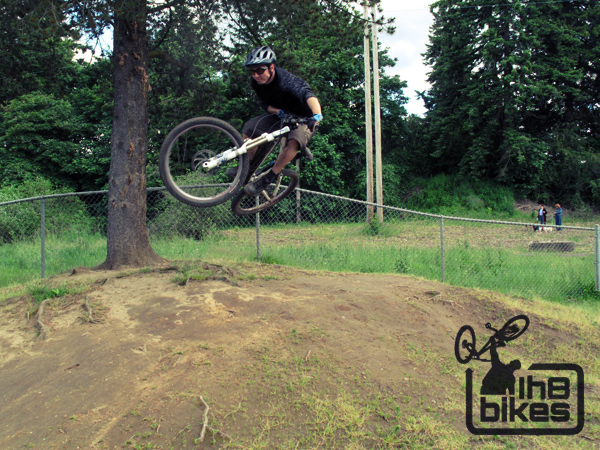 Getting my turn bar on.

Although we enjoyed being able to ride on bike paths and bike ways all the way out to Powell Butte Nature Park, it was disappointing to pass by a number of natural surface trails- that were all off limits to mountain biking. Or are they? We took a few detours along the way and found this short patch of trail. 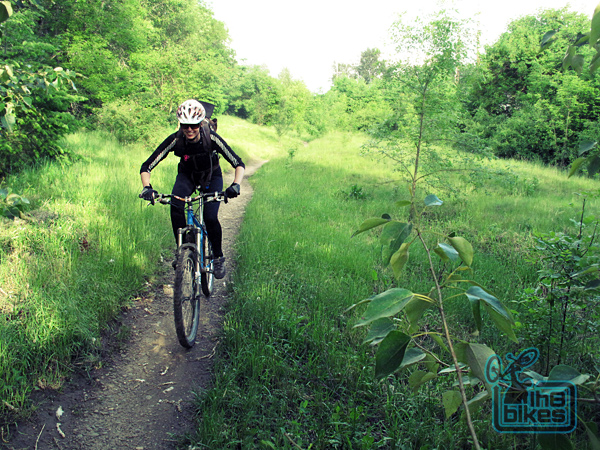 Single track puts a smile on that girl’s face everytime. 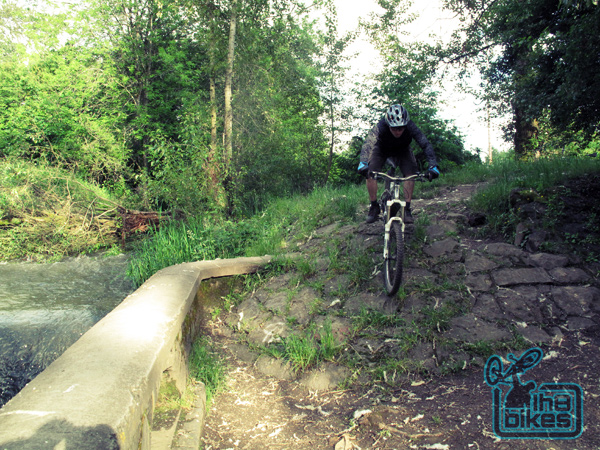 Thing ended up being the most technical thing I rode all day. Good thing I had my AM bike with it’s 6″ of travel.

At the moment, the park is under construction as part of an upgrade to Portland’s water supply, but is open. If you would like to help, check out the Northwest Trail Alliance website to find when the next work party is schedule.

Note: trails are closed when muddy.