I have a confession. I’m one of those mountain bike riders that would rather pedal his bike downhill rather than up. Unfortunately, here in the bay area, opportunities for riding down hill without having to “earn your turns” aren’t very common. I even tried to move back to the Portland area a few years back just so I could  join the homies on weekly shuttle runs on jump-filled sweetness at Hood River, Black Rock, Cold Creek and other local DH/FR hotspots. However, crappy weather, a long drive to get to good stuff and lousy job opportunities had me creeping back to the Bay Area, tail between my legs. On the bright side, I’ve been happily employed since my return, and the weather is totally kick-ass most of the year here. I still complain about long drives to get to good trails, but I live in Oakland, which happens to have a ton of green space right up the hill. The only downside is that most of the good stuff is off limits if you want to ride your bike on it.

If you’re not from around these parts, Joaquin Miller Park is the go-to destination for mountain bikers in the East Bay area. Although the park is somewhat small, it’s extremely accessible. If you know your way around it’s possible to get a solid amount of riding in without resorting to loading up the car and traveling a significant distance. Unlike most of the other green spaces in the East Bay, it contains bike friendly single track trail, much of it designed with the MTB experience in mind. You can even shuttle the trails on a long travel bike, (there is still a lot of pedaling, but they do it) although ironically, these days I prefer to pedal up to get there. 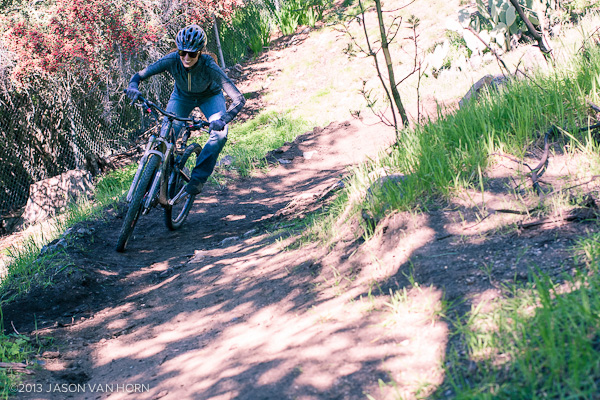 Inga takes a run through the berm at the bottom of Bishops Walk after a bit of trail work to test it out.

From our apartment in Oakland, it’s a short three mile jaunt on pavement before our tires touch dirt. From there, it’s a steady but rolling climb upwards to reach JMP proper. Truth is, I’m actually kind of lazy, and much of the time would rather pull my bike out and just ride from my front door than load my gear in the car. Since I’m loading the car up every weekend to ride somewhere else, JMP is my fallback spot.

Since we’ve moved back to the Bay Area, we’ve been working with the Bicycle Trails Council of the East Bay to help maintain the single track trail at JMP, with the hope that we can slowly contribute to improving the overall riding experience. I have a dream— and I’m channeling the MLK JR. voice here—a dream of one solid single track loop throughout the park that is so fun the uphills feel like downhills, with berms to rip and rollers to pump and jump. Unfortunately, there are several other groups of folks that also see the park as their home turf, and most of them don’t ride bikes. They don’t care for our presence either, much less like running into us on the trails, so just about everything up there is a compromise. That doesn’t mean we can’t make the trails better, and more fun. That sweet loop can still happen, but the word “jump” seems to be the deal breaker.

Personally, I can live with that; provided we can get another spot somewhere close enough with some Kodak worthy jumps. (Hopefully that don’t look like a big BMX track, because in the context of trail riding -ie, narrow lines versus 8 lane- everything is just way more awesome.) 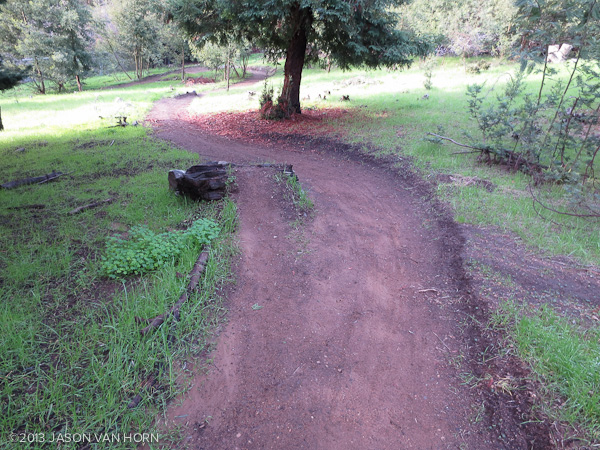 I love jumps as much or more than you, but we took this sucker out. (sorry)

So far we’ve had the opportunity to do just that; last year we worked with the Volunteers for Outdoor California (V-O-Cal) on a reroute of Bishop’s Walk, a popular entrance point for local riders. In preparation of the project I represented the BTCEB and met with leaders from V-O-Cal a number of times to help plan the project, which was finished over the course of two days, and the help of dozens of volunteers. Unfortunately it was months before the trail saw the moisture needed to compact properly. Fortunately, our work has held up remarkably well, and we finally were able to get a work day scheduled last month to follow up and address some of the issues.

One of the issues has been the soil in our switchback turn. Although it’s lacking in clay content, it hasn’t eroded nearly as badly as I thought it would. We’ll still need to address it at some point, and the most obvious solution is to harden the tread by adding rock. In the meantime, we filled the ruts, and hoped for the best until we source materials to properly do the project. We also had a number of “jumps” that popped up on the rerouted trail. Unfortunately, while a lot of folks on bikes (including many in the BTCEB) enjoyed riding them, the other hiking oriented interest groups noticed them too, and that of course goes straight to the land managers of the park. They weren’t part of the design of the reroute, and leaving them in also means that we endorse them by default, so they had to go.

We took out the “jumps”

If you’re unhappy with the decision to remove them, I totally get it. In this case, I personally made the call to take them out, (if you want to hate on someone, feel free to leave a comment below) although the reality is that keeping them wasn’t really an option if we want to continue to exert influence over the bike legal trails in the park.

Part of our plan with these trail projects is to keep the trails narrow, and to avoid boring straight line sections. Cross the road into the East Bay Regional park and everything bike friendly is 15-20 feet wide. They call these monstrosities trails- but they might be thinking of the Ho Chi Minh Trail, since much of East and West Ridge are wide enough for two tanks to travel on comfortably. No thanks. If you look at the photo above, you’ll see that a sizable chunk of wood that was designed to corral riders into the curved route had dirt stacked on it, effectively creating a small kicker. It also results in this section going from about two feet wide to more like six.

So that stuff had to go. In its place we worked on the berm at the bottom. It’s not finished yet, as it doesn’t quite rip the way I’d like it to, but the section serves as a climbing turn for hikers and riders coming up the hill, while also still being fun for the homies ripping back down. In fact, the entire reroute, which used to be more of a straight line down the hill, is now narrow and twisty. If you know how to ride a bike, the section is pretty damn fun. And hopefully we can continue to add more of this to the park.

I’m still pushing for the creation of a downhill specific trail though. Unfortunately, it is probably going to take a lot to make a sanctioned trail happen. We’ll see. It definitely won’t happen by bitching about not having it with our riding buddies though. Teaming up with an organized group like the BTCEB though means having a voice that is listened to, by the right ears. If you’re not down to help, do us a favor and avoid sabotaging the efforts- all the trail building we do in JMP is sanctioned by the city of Oakland. (I won’t tell you not to build jumps, I feel your pain. I grew up building dirt jumps in the woods, and off the record I’m down— just do us all a favor and pick a different location)

JMP isn’t the only park the group is vested in; new multi-use single track trail is being added to Pleasanton Ridge as well. Mountain biking faces a bit of a challenge as the volunteer V-O-Cal organized work day happens to have been scheduled during the weekend of the Sea Otter Classic. Let’s hope some of our fellow mountain bikers in the community step in to help keep the single track single, since we’ll be at the races. 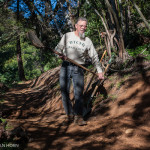 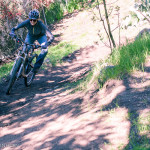 Inga takes a run through the turn to test it out. 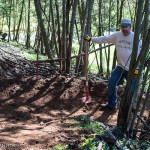 The run in to this switchback turn is mostly likely going to require rock to harden the tread. 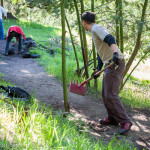 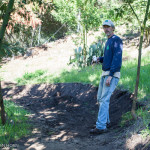 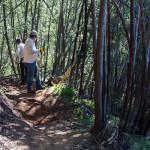 adding a drainage after the turn. 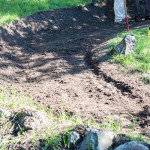 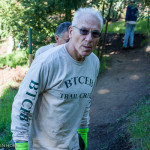 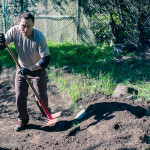 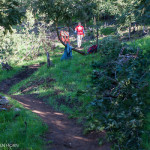 Lazy riders reestablished the old line, forcing us to decommission it a second time. 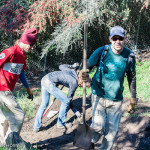 Inga has recently accepted a position as membership director with the BTCEB, so expect to hear more. We wouldn’t be wasting our time if we didn’t think things weren’t on the verge of changing for the better in the near future, but the only way we’re going to officially change things up is to work within the system. (Even if you’re working out of the system as well) The web presence of the group could use improvement, but you can learn more about their programs at BTCEB.org.