We’ve never been big fans of folding bikes. Although they seem to work well for their intended use, they look pretty geeky, and that’s a hurdle that I personally find hard to clear. Perhaps it’s the use of 20″ wheels and the long, goofy looking steerers, but I just can’t get over it. You’d think that someone would manage a design that doesn’t look so, well, lame.

We recently rediscovered Montague Folding bikes, and were pleasantly surprise to find they didn’t offend our visual palette. They feature full size wheels, while still being easy to store and portage. The best part is they almost look like regular bikes, without the small and silly wheels.

That said, I’m not sure what to think of this guy. I think that is what a Massachusetts hipster looks like— dang, dude’s serious. Almost as serious as this guy. You can tell he means business with his duckface in full effect. Seriously, what is up with all the duck face up in here?

I’m actually a lot more interested in the bike though, than an east coast interpretation of our local Mission hipster archetype. The Boston single speed folding bike in particular. Montague’s take on the single speed track style bike  is offered in a single speed, 8-speed internal hub or frame only configuration. I’m a fan of the single speed option—it comes fully murdered out in matte black, with clean minimal lines. If I didn’t already have a track frame being custom built for me right now, I’d be temped to add one of these to my quiver, though I’d likely swap out the bar, stem and saddle first. According to Ryan at Montague, they’re also starting to offer three of their models with frame only options if you want to build one up to your own specs.

Frame only, the Boston lists at $499, with the complete pricing at $699. Check out this video for more awesome duck face and some sweet riding with locked out elbows, or check out Montague Bikes here. 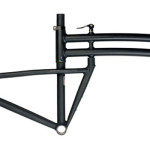