Re-routing even just a section of the most popular trail around these parts is bound to result in some resistance from the riding community. Here in the Bay Area we don’t have a lot of (currently authorized) places to go when we want to take a quick spin on our bike after a long day of work. When we first heard our favorite descent at Joaquin Miller Park in Oakland had a reroute in the works, like anyone else we were concerned about the possibility of our favorite local trail being changed for the worse. Unlike 99% of the riding community however, we’ve worked hard to put ourselves in a position to do something about it, and have joined forces with the Bicycle Trails Council of the East Bay. (the non-profit bike group that has worked to keep the trails open, as well as improve the riding experience)

In the past, we’ve been directly involved with trail projects to improve the riding experience at Joaquin Miller. This year has been different. Instead, we’ve put our efforts into the bigger picture, first working to help get a flow trail developed in Marin, and now raising money to make a world class bike park in San Francisco happen. (news on this coming soon) One can only give away so much of your time though, and like everyone else, we’re already overloaded with work and trying to make a living. So this time around we had to sit back and watch this project move forward without becoming entrenched in the process. 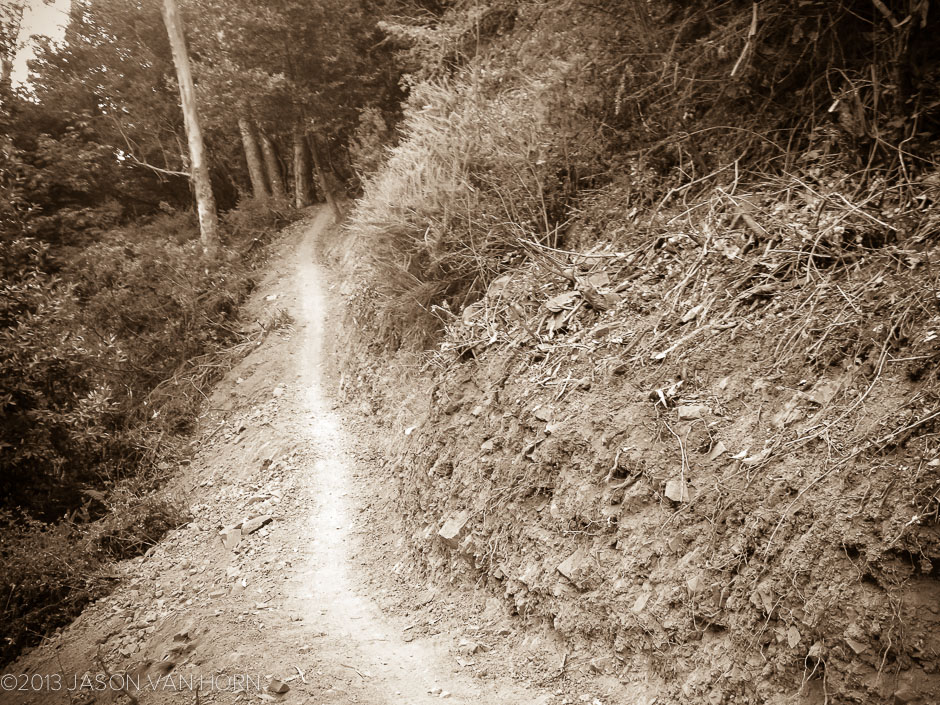 The start of the rerouted section of Cinderella.

When we learned about the scope of the project it is safe to say we breathed a sign of relief. The issue the group wished to address with the Cinderella trail was with the last 200 feet of trail. Not only is it a minimal amount of trail that we’re losing, but it’s straight fall line section that has been channelizing due to user based and water based erosion. This section of ruts has been hardened with rock and water bars in an attempt to make it more sustainable. That said, I happen to enjoy this section quite a bit, and it’s a blast to point and shoot it since it’s the closest thing we have to a DH trail.

The downside to this is that the trail ends rather abruptly. It-bones a wider trail popular with hikers, and with mountain bikers existing the trail at mach 10-like speeds, is a disaster waiting to happen. A lot of different options were considered, including closing the entire trail. Fortunately for those of us that see this descent as the highlight of any session at the park, the decision to reroute the section was made.

The new line was to be a rolling contour trail built to contemporary standards, complete with rolling grade dips and banked, insloped turns. Designed for mountain biking, by mountain bikers. First local trail building legend Jim Jacobson (the man responsible for green lighting Endor, the new flow trail at Tamarancho, and probably any local trail you like to ride) was consulted. Then local trail building outfit Hilride was brought in to pin the final alignment. (with funds provided by the BTCEB, your membership dues at work) This weekend we had the opportunity to roll through the rough cut of the trail, and while it is far from being complete, its far enough along that one can get a sense of how it will flow in years to come. 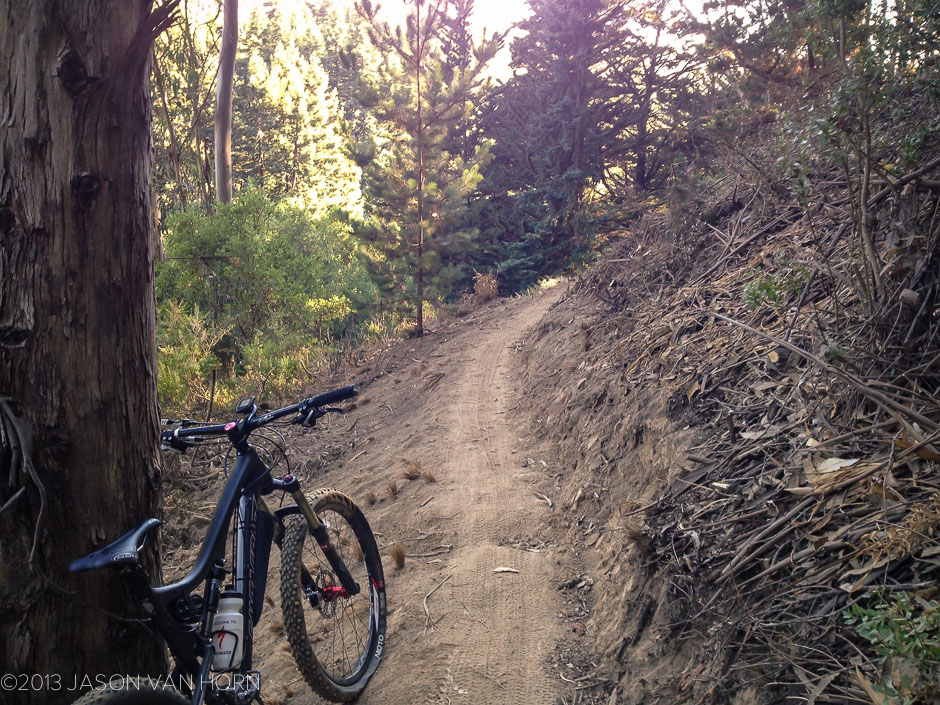 The Cinderella Trail at JMP.

The beginning of the reroute is notable in that it slopes back up along the hillside at a bit of a grade. However, with time and a bit of improvement, skilled riders should have no problem carrying momentum up the section, and with ample sight lines, speeds should remain consistant with the previous trail experience. The downside will be when encountering other trail users. Although we have no doubt the trail will end up being a bit wider, it will still be a narrow single track, and encountering hikers will mean having to stop. (Good bye flow.)

Since the trail is a multi-use trail, we’ll all be dealing with it together. The new exit of the trail is visually appealing, which means we’re likely to see a lot more folks on foot coming up the trail as well. On the upside, the new trail alignment adds almost half a mile of additional flowy trail to the park. (WIN) Astride a light weight trail bike the section will eventually rip nicely. If you’re a gravity loving rider that shuttled this section because of the minimal shuttling opportunities, you probably won’t be as stoked. That said, if you don’t like the experience of the new alignment, there will be plenty of volunteer opportunities to help dial in the section, as the trail is far from complete.

The bulk of the labor for the reroute was supplied by V-O-Cal, (Volunteers for Outdoor California) a group known for being able to bring the numbers. Almost 100 volunteers showed up and labored by hand all weekend putting in 6-8 hours of labor a day on both Saturday and Sunday. That’s hundreds of hours of labor completed. 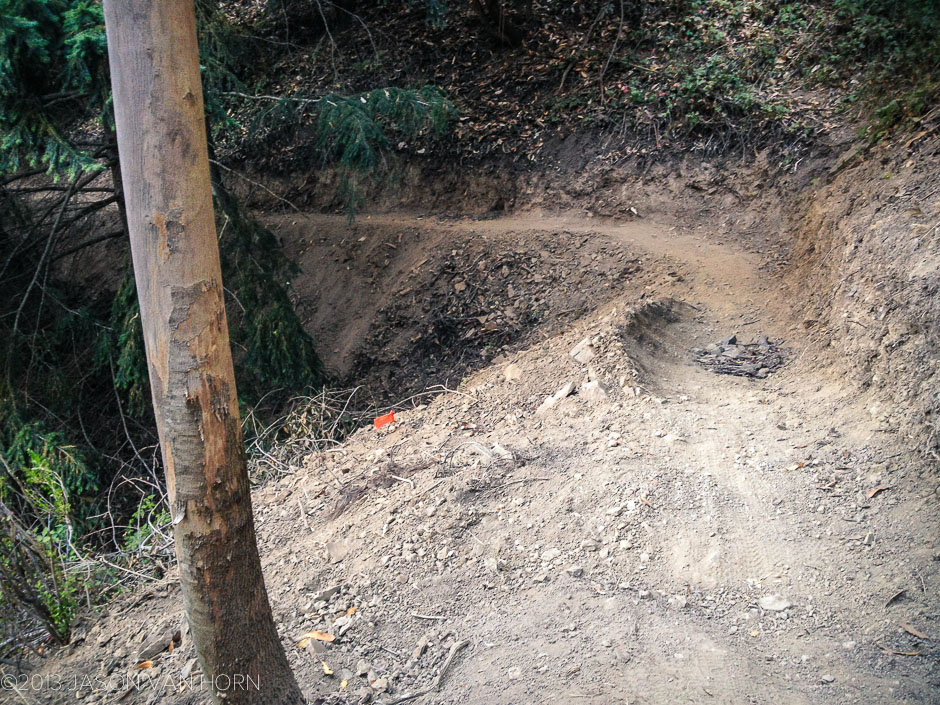 A turn on the Cinderella reroute.

A lot of dirt was moved, but it does have a ways to go. There are three switchbacks on the new alignment with very tight turns that needs all sorts of love. Many sections still need proper outsloping to make room for the wide bars many of us love, and much of the tread still needs a lot of work. Some of it still hasn’t been outsloped properly. (V-O-Cal isn’t known for having skilled or knowledgable crew leaders or doing very good finish work)

On the upside, I’m actually looking forward to getting some rain out there, so we can dial this puppy in. V-O-Cal did get 80% or so of the work done, and if you don’t like the trail, you might consider getting off your ass and doing something about it.

If you’re interested in being a part of that effort (as opposed to sitting in front of your computer complaining on the internet) head over to BTCEB.org and sign up for notifications of the next work day. 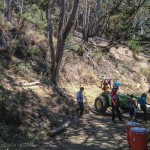 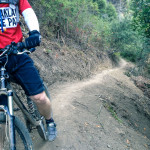 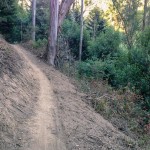 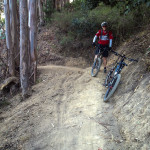 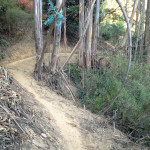 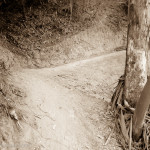 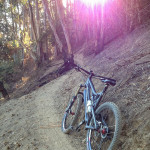 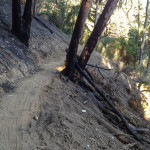 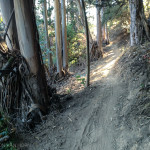 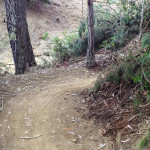 One of three switchbacks. 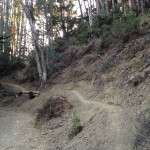 The new exit of the trail.