The Tracer VP was created by Intense to take on comers in the long travel trail bike category. With its 1.5″ headtube and adjustable 5.5-6 inches of VPP travel, it also falls into the popular all mountain category, dominated by bikes like the Specialized Enduro, Trek Remedy, Santa Cruz Nomad, and Giant Reign.

Intense builds some highly coveted bikes, and like many riders I’ve always wanted to have one. After selling the disappointing Enduro SL, I built the Intense Tracer up in October of 2008. Out of the box, it was a gorgeous bike.

Being more of an all mountain rider, I always planned to run the bike with a 160mm fork up front. With the taller axle to crown, the effective geometry was 67.5 degrees on the headtube. I used E.13 reducer cups with an FSA Impact headset, which kept the front end low. In hind sight, running an external cup on the bottom would have raised the front end slightly to a 67 degree angle, which would have been more to my personal taste, and slack it out a bit more for the type of riding and trails I enjoy.

Read more about the build here.

Weeks after the bike was built up, it was off to Moab, to solidly break it in proper. In Moab, the first short comings of the frame became apparent on our first day playing around on the slick rock trail. 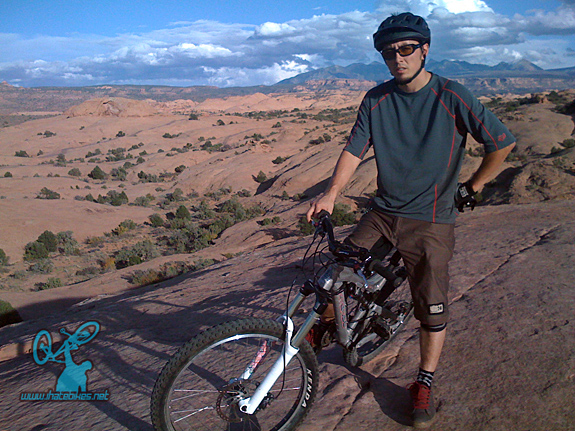 The Tracer VP on the slickrock in Moab. (shot on an iPhone)

Although we were running a 2.35″ tire in the rear, on hard hits, the tire would bottom out and make contact with the seat tube, making a loud buzzing noise on each impact. Although the bike rode beautifully on the lower porcupine single track, the constant buzzing noise was disappointing. Later, after contacting Intense, we found that the Specialized 2.35″ tire was slightly larger in it diameter than the average 2.35″ tire. Switching to a 2.35″ Nevegal solved this issue. Running the bike in the 5.5″ travel mode would also have resolved the issue.

The trip to Moab  also marked the first time I became aware of the limitations from the extra volume air can that was spec’d on the Fox RP23 shock that came on the bike. 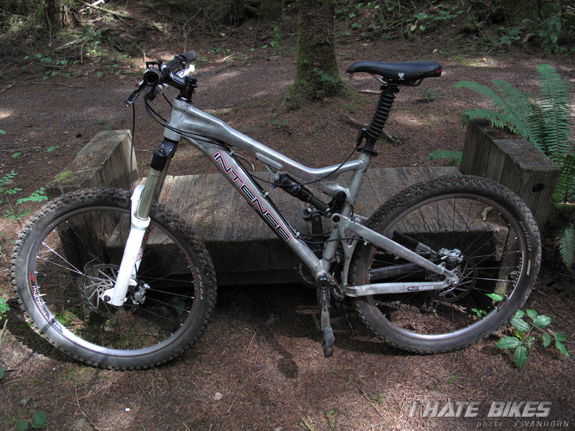 The Intense Tracer is a great example of a bike in the capable long travel trail category that skirts all the all mountain category.

The additional volume of the XV can was chosen for the bike based on the way it affected mid-stoke characteristics. Because it had a very linear progression, it gave the bike a “bottomless” feel, and utilized more of the bike’s travel. (for the average trail rider) While this is a good spec for many of the riders the bike was originally intended for, (ie, rider moving to a longer travel trail bike for the first time) for aggressive riding freeriders or downhillers looking for a solid and all around trail bike, it was a major disservice. These impressions weren’t mine alone either- entire threads have been dedicated to it on MTBR.com. The air shock also makes the limited sweet spot of the rear suspension set up even more apparent. Too much air pressure, and the bike would bottom out less harshly- but it would also skip around and lose all corning capability. Too little air pressure, and while the bike would grip like crazy in turns, but it would bottom out on even moderate impacts at high speed. 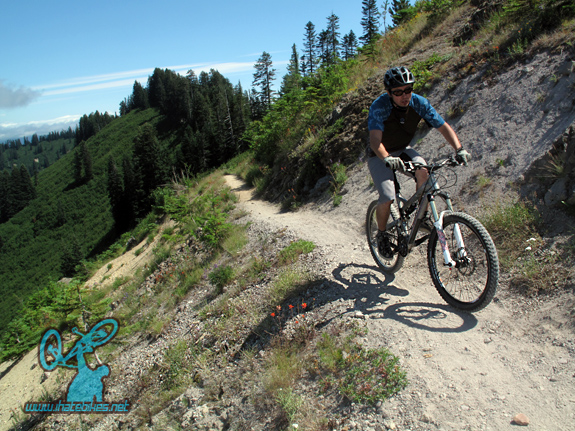 Cranking up the Ape Canyon Trail on Mt. Saint Helens.

The current 2010 model of the Float RP23 with its additional boost valve, a technology appropriated by Fox from their own DHX air shock, should be a much better performer on the bike. We’ve also heard reports that the bike simply kills it with a coil spring shock- the Cane Creek Double Barrel being the most heavily talked about. However, any type of shock upgrade will run a user back a minimum of several hundred dollars. Not the kind of thing one wants to hear when they just want their bike to work right for the type of riding they do. Especially after dropping all the dough on an expensive boutique frame. If you are an aggressive rider, you might consider a DHX air or the Cane Creek shock and order it that way at the time of purchase and save yourself a wad of cash.

We never had any issues with the bearings in the VPP links, and with the Zertz fittings, keeping it maintained is simplified. The rear end of the bike is still solid, with no play to speak of either. Although I’ve bottomed the suspension out quite a bit, last time I checked the rear shocks mounting bolts were still straight as well, with no damage. The frame and the 1.5″ headtube have a solid reassuring feel to it as well, unlike many new bikes that feel like they just might be too light. 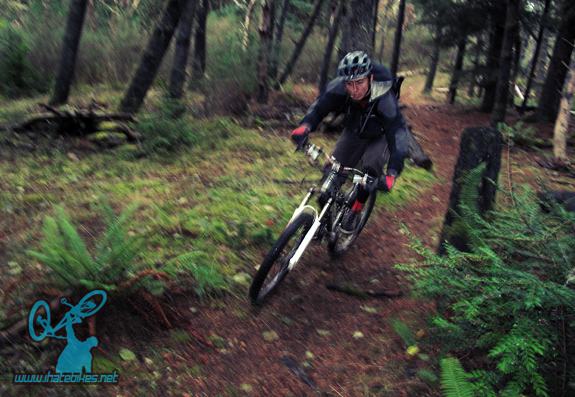 A wet and chilly day of trail riding on the Oregon coast.

The bike handled quite well, and on long cross country rides, I was in love with the way the bike cranked up hills. It is a bit of a trade off on harsh, square-edged hits. We noticed the Santa Cruz Nomad was the same way- when banging through a stack of huge roots at speed, you definitely felt each root. It is a trade off though; on my Trek Remedy, it went over the same roots and feed back through the bike was considerably less harsh. However, on long days of pedaling, the efficient pedaling of the Tracer will leave you with a good deal more energy. If you find yourself riding rough trails in the south west, and live for burly rock gardens on your trail rides, you might look at a bike that will take the bumps better. In the northwest, where most of the trails are loamy and soft, you will be stoked on how well it pedals. 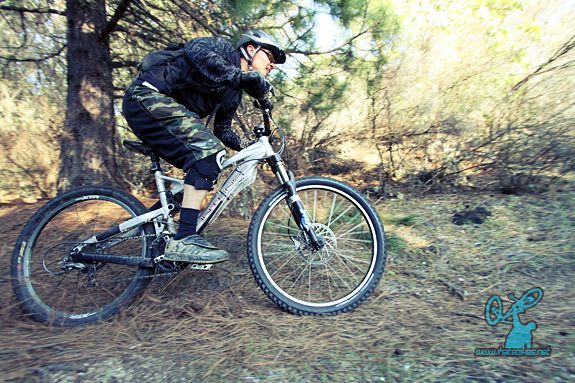 Izaak VH rips a turn in Jacksonville, Oregon on the Tracer.

In the end, while the Tracer is definitely a sweet bike to have in the quiver, it wasn’t quite versatile enough for my personal intended uses.  It fits more solidly into the long travel trail category, and would be a strong contender for building up as a Super D bike. (with the correct rear shock) The frame is definitely capable of ripping the descents.

However, in the end, while would suffice for many riders, when it came to dropping a bike from the quiver to free up needed cash, the Remedy beat out the Tracer as my all arounder. The way I had the Tracer configured and planned to ride it gave it too much overlap with the other bike. Although Trek’s Remedy doesn’t pedal as well as the Tracer, it was more versatile in the end, and won out as the quiver killer.  Not to take anything away from the Tracer,  but when you can only choose one, having the all mountain capability was key for me, as we are fond of traveling to epic trails.

For someone looking at an Intense all mountain bike that can handle freeride duties as well, they might be better served by looking at the next model in the Intense line, the Uzzi. The seat on the Tracer simply doesn’t quite get low enough to inspire confidence on larger jumps, especially lips with BMX transitions. To be fair though, it isn’t the bike’s intended use, and no trail worthy all mountain bike works well as a slopestyle bike- they are two completely different creatures.

Bottom line: The Tracer is a good looking bike and excellent performing long travel trail bike with good all around handling characteristics, held back by a poorly spec’d rear shock.

for more info on Intense Cycles, visit their website: http://intensecycles.com/

We’ve been hanging out in Southern California for about a month now, and ironically, I’m completely missing the versatility of this bike. After a few group rides (astride a Trek Remedy) with mostly XC riders on some rides in the High Desert, I find myself missing the excellent pedal platform of this bike. If I had it here, I’d be running it in the 5.5″ travel mode, ideally with a 150mm travel fork, and a Cane Creek Angleset headset to set the head angle up at 67º. Fast rolling tires would also be key. (live and learn)