This weekend marked the first day of 2020 volunteer trail work at Gateway Green. With limited capacity for volunteers due to COVID safety restrictions, slots filled up quickly. The crews focused on finish work on the new gravity-fed lines, but lacking a vibrating plate compactor, (two or more would have been ideal) the volunteers were limited to hand tools.

Still, the crews managed to get a good chunk of the hillside further along, and it was clear from the enthusiasm of those in attendance, they were simply stoked for the opportunity to get some progress made on our local riding destination.

And of course, along with working on the park comes the privilege to get first tracks in and to test the features.

Note that the park is still closed. The trail building contractors noted the number of tracks they find daily, which often means they have to halt the progress they’re putting in to repair ruts. Some of the worst offenders have been cyclecross riders, as their narrow tires leave deep grooves in the surface of the rollers, berms, and jumps.

We also got a view of what the finished appearance of the “spine” access road/trail will look like, as the lower section is at or near the final result.

At this point, it practically is a road going through the park. It isn’t quite clear why it isn’t being capped with asphalt and just taken all the way there. Either way, it should be interesting to see how things progress on this front after a winter or two.

The gravity lines currently ride like a downhill BMX track, with one section consisting of berms and table top jumps and the other rollers and berms. If we’re lucky we’ll see some lips added to the side of a few features to facilitate tricks.

Stay tuned for further announcements on new volunteer opportunities, as well as a major upcoming announcement… which may or may not be focused on an asphalt, 4-season pump track.

We previously reported on the Gateway Green Bike Park construction just two months ago. At that time, the construction was a few months into building out park infrastructure, with the singletrack trails and features on the hill flattened and graded, or hidden under a wave of overgrown weeds.

The 5.75 million project had yet to start on updates or improvements to any type of cycling features, but in the last two weeks, we’re finally seeing some indication of what the future cycling experience may resemble, with two flow trail lines being fleshed out by veteran trail builder Jason Wells.

At the moment it looks like we’re getting two gravity-fed, flow style trails featuring berms, rollers, and tabletop jumps – standard fare for bike parks. We’re understandably the most excited about the larger features as the berms appear of ample size, but knowing how much our wet winters erode shaped soil on this hill, we’re curious not just about the final experience come the proposed November opening date, but how large they’ll still be a few seasons in. (no update on whether our local bike park will get a step-up jump suitable for learning tricks yet though)

The logical solution will be seeding them, as was done with the landings for the wood kicker line, which should help keep erosion to a minimum.

As volunteer trail stewards that have donated a significant amount of personal time into the maintenance of the park, we’re excited to see the addition of water lines— a major upgrade to the park which will finally allow the ability for real maintenance.

Knowing how much use this park will see, it will be a lot of work to just to keep the lips of the jumps intact.

We’re also psyched to see drainages being put into place. We are in Portland after all.

Unfortunately, we have yet to hear a concrete update on the status of a paved Velosolutions-style pumptrack. Ideally built by Velosolutions, who have become known as the premier contractor in the paved pumptrack space.

A second gravity fed option is also under construction and promises plenty of cornering practice, as well as a place to take those pump track acquired skills, as it resembles a slalom style downhill pump/flow track style trail. (It doesn’t appear a second line for a dual slalom option is in the works though)

We’re also expecting to see a climbing single track trail added to the mix, as indicated on previous trail plans.

We’ll be updating this post weekly with the latest, so check back soon as we continue to document the progress of Portland’s bike park.

For those that are curious: please note that the park is still technically closed. The trail crews are currently putting some long days in, often working until dark. Per the Gateway Green Project manager — Ross Swanson of Portland Parks — the burden of safety is on the local contractors, and having to keep an eye on the curious only serves to have a negative effect on how much they can focus on their job, which is to create an awesome riding experience for all. 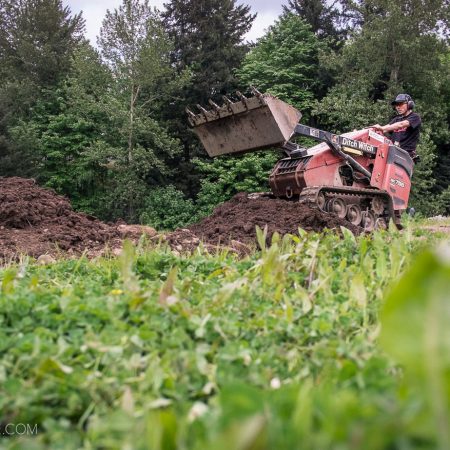 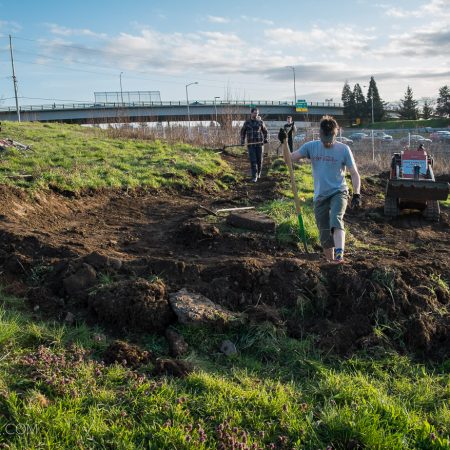