There are plenty of reviews of the popular Santa Cruz Nomad Carbon posted online.  Riders have taken to the attractive carbon rig all over, whether they’re looking for a long travel trail steed, an aggressive all mountain or light weight freeride rig. So when it came to writing our Johnny-come-lately review, I didn’t feel the need to rehash everything that came before. If you want to check out some nice studio shots of the frame, head over to Sicklines to check out their build. If you like riding the kinds of trails we do, and are curious about the thought process that went into selecting this chassis as our personal bike, read on.

There weren’t a lot of bikes that made the list when it came time to pick a new steed for the 2011 riding season. Especially considering that due to financial constraints, (moving back to the Bay Area and road tripping all over racks up bills) it would temporarily need to take the place of two.

There are a lot of great choices to pick from these days- and while there are a lot of great bikes on the market that work really well, the magical “one” bike (a bike that climbs like an XC bike, and descends like a DH bike) doesn’t quite exist yet. (although every year companies release new bikes that come closer to the mark) However— throughout our search, the Nomad from Santa Cruz is a bike that has consistently gotten high marks for coming quite close, as well as setting the bar. The new carbon iteration of the Nomad platform takes it to another level. Not only is the frame extremely pleasing to the eye, it is one of the only 160mm frames available with a threaded bottom bracket and ISCG tabs, and coil shock ready- all must haves on my list. Going with a carbon frame also would offset the weight of the coil rear shock I wanted to run- a biggie.

In the past I’ve spent a lot of time on Specialized’s FSR, having owned several Enduro models and a few Demos. I’ve owned single pivots, Faux-bar bikes, and spent the last two seasons riding Trek ABP bikes.  (the Trek Remedy, Session 88, and Fisher Roscoe.) Prior to that, I had my first go with VPP, spending almost a full season on the Tracer VP from Intense. 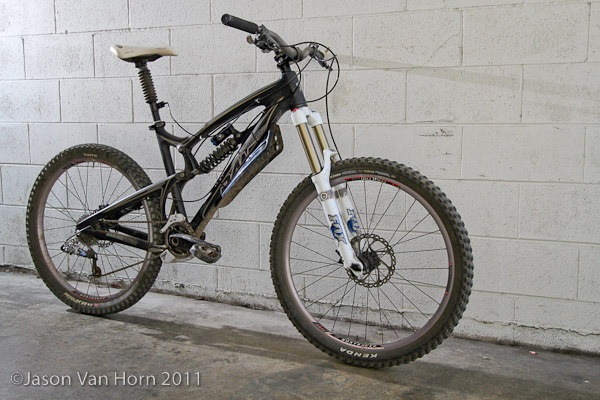 I always liked the Tracer. However, for my style of riding, (all mountain + dirt jumps) an air shock combined with VPP suspension didn’t seem to do it for me, (see review here) and I ended up with the Trek Remedy as my all mountain machine. It didn’t climb as well as the Tracer, and it felt like it took more energy out of me by the end of the day, but in the end I chose descending prowess over efficiency. The simple fact is I ride up hills because I like to go down-preferably hitting a lot of jumps and bermed turns along the way. Even with slightly less rear wheel travel, the Remedy is a great example of what an all mountain bike can be. However, between the longer reach (great for all day rides, not so great on jumps over head height) and the air shock, I found myself wanting even more downhill performance that air shocks simply don’t provide.

It was time for a new steed. The first place I looked was the Trek Scratch— similar to the Remedy, but more DH/ Freeride capable, and only a bit heavier; it looked like it could be pedaled all day as well if needed. However, I ended up choosing to go a different direction.

Part of it for me was the geometry and cockpit. Several manufacturers make a heavy duty all mountain/ freeride machine with a short top tube and slack angles. Take Specialized for example, and the SX Trail. For several years, the main difference between the SX and the popular Enduro line was geometry, a coil shock and about half an inch of travel. The SX has a shorter reach and geometry aimed at offering better handling while descending, while the Enduro designed to have a more stretched out riding position for long enduro-style rides. Trek has a similar line up with the Remedy standing in for the Enduro, and the Scratch for the SX. You can pedal these bikes, but with the short reach and slack angles, the emphasis is on descending. Having active suspension also has a down side that isn’t mention in the pages of marketing materials. On smooth trails, especially when pointed up hill, it feels like a lot more work- even with propedal engaged. (There  is a reason Specialized invented the brain shock)

The interesting thing about the Nomad is how it splits the difference. The toptube measurement (22.8)” lies near the middle of many (medium) freeride machines (22.5″) and all mountain steeds. (23″) I have yet to measure the actual reach measurement, but to me personally, it feels dialed.  Santa Cruz offers it with a lighter air shock or a higher performance coil shock as well, so you can choose a bias on climbing or descending. Want more of an Enduro setup? Try a lighter weight air shock. I chose to take the weight saved by choosing a carbon frame and put it into a coil sprung shock. The best part of the Nomad, is that I didn’t have to choose to go with an all mountain bike, or a light freeride bike.

Swap out to a slightly longer 70mm stem and light wheels for an all day epic ride, or run a short 50mm stem and heavier wheels for shuttle runs and jump trails. If you own two shocks and sets of wheels, it would be like having two completely different bikes. (Assuming you weren’t lazy like me, and were willing to change them out) With Cane Creek’s new AngleSet, you can take it a step further with head angles that put it in the mini-DH bike category.

Santa Cruz owners seem to be more likely to be the kinds of riders that build their frame up from scratch, as opposed to buying a complete—Nomad owners especially. Take a look at the threads on MTBR. After a lot of thought, I decided to build it up  focused on exactly what I love to ride, which clearly meant a descending bias for maximum performance. 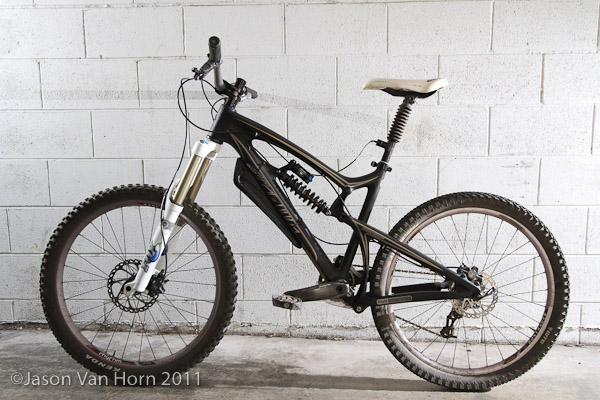 My initial build is actually not much different from how I ran my Remedy. This was definitely intentional, and offers me a baseline to start from for comparisons. (I have a number of new components on the way)

Cockpit: Short stem and wide bars rule. Like adjustable height posts, I don’t understand why more riders haven’t switched to wider bars. Even when I do get around to building up a lightweight XC capable trail bike, I’m spec’ing 28″ or 29″ bars. Want to go faster and be more in control? Give it a try. However, wide bars and a shorter reach go hand in hand in order to keep a proper riding position. For my stem I’m running the Thomson X4 in a 50mm length, the same stem length I’ve ran for years. My first ride out I started with an Easton Havoc DH bar with a low rise. However, I quickly changed it out to a bar with a higher rise, a Sunline V-one.

Drive train: I’m still running a MRP Mini-G bb mounted chain guide with 9-speed X drive train. The Nomad Carbon has ISCG tabs, but since the bb mounted guide works flawlessly, I don’t see a reason to change out the backplate. I’ve had enough issues with chain guides in the past that when I have something that works, I don’t mess with it.

At the moment I’m running 170mm Saint cranks, but they are massive overkill, and a temporary spec. I have an X9 2×10 speed drive train that I’ll be trying out in the near future, but it may not make it onto this bike. I’m actually scared of front derailleurs, based on having chains pop off at the worst possible times, resulting in some of my worst injuries to date.

Brakes: I’m currently testing out the Stroker Trail by Hayes. I haven’t tried a Hayes brake for years, and to be honest, haven’t wanted to either. This design is a massive improvement from the old models. The Stroker Trail is rated for all around use by Hayes, and features an easily changable reach adjuster.  Stopping power has proved adequate thus far, and while it isn’t as grabby as other brakes I’ve been using, I can’t complain. I’m also running smaller rotors on this build, (7″ front, 6″ rear) so it isn’t exactly an apples to apples comparison. 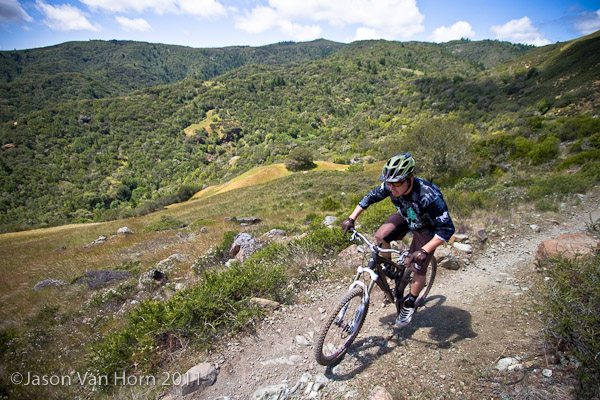 Breaking the carbon Nomad in during an XC/AM ride at Tamarancho in Fairfax, Ca.

Front suspension: Currently running a borrowed Fox Float 36RC2 with 160mm of travel. Ironically the same fork I’ve ran on the Remedy. However, this will be changed out in favor of a Vanilla 36, while retaining the 160mm travel configuration. The Float has been a great fork, but the air spring feels a bit undergunned at times. It’s been a while since I’ve run a 160mm fork with a coil spring, and I’m looking forward to trying it out.

If you look closely, you’ll notice a huge amount of spacers on the steerer. Since the fork is a loaner, I’m not planning to cut it down. It also is giving me the chance to try different bar heights. I went with a zero stack upper headset cup from Cane Creek and while it works flawlessly and allows for low stack heights, I wanted to keep my bar height similar to my previous bike. I’m not too hot on the look of having 20mm of spacers though.

So far, I’m pretty damn stoked. With lighter wheels and tires, I held my own (mostly) on an XC ride with a pace that left me hurting. I switched out the Kenda Nevegal 2.35 I was running up front in favor of a Kenda Blue Groove 2.5 with a dual ply casing, (and flat pedals) and headed to Pacifica for some 3X laps, and the heavier front tire added a solid FR feel in the air. Light freeride/ DH use? Thumbs up.