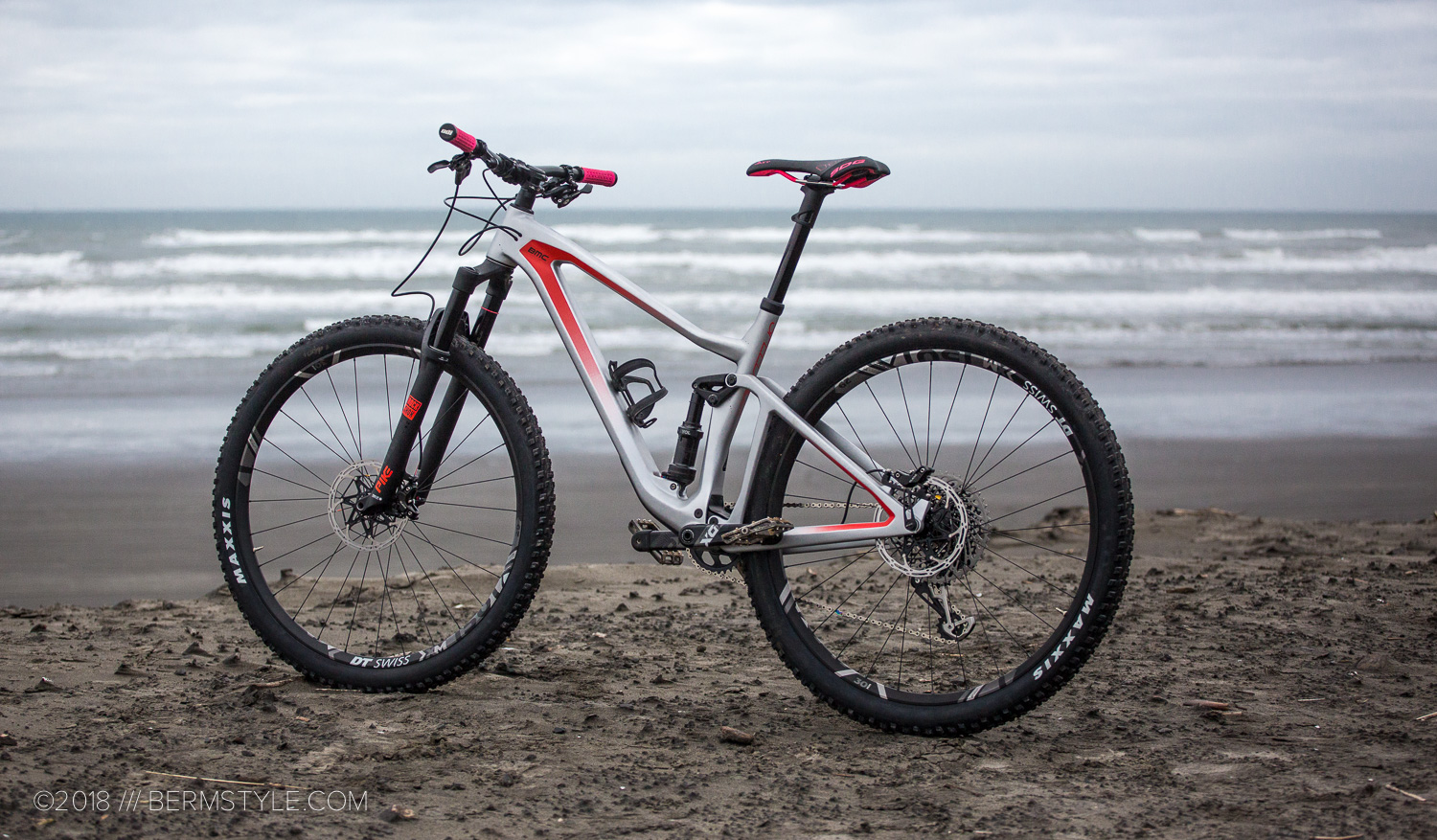 The new Speedfox from BMC is a fascinating beast. Although the offerings we’re seeing from other manufacturers lean towards additional  travel and more aggressive geometry, this year’s model actually reduces the amount of suspension travel. It also introduces technology once predicted as the “future” of mountain bikes. Interestingly enough, the futuristic looking fantastic plastic frame with its sculpted shapes and lines bucks the prediction, utilizing a cable, lever and pins as opposed to electronics to activate its workings.

At the root of it is a unique new dropper post concept that integrates the post into the frame. 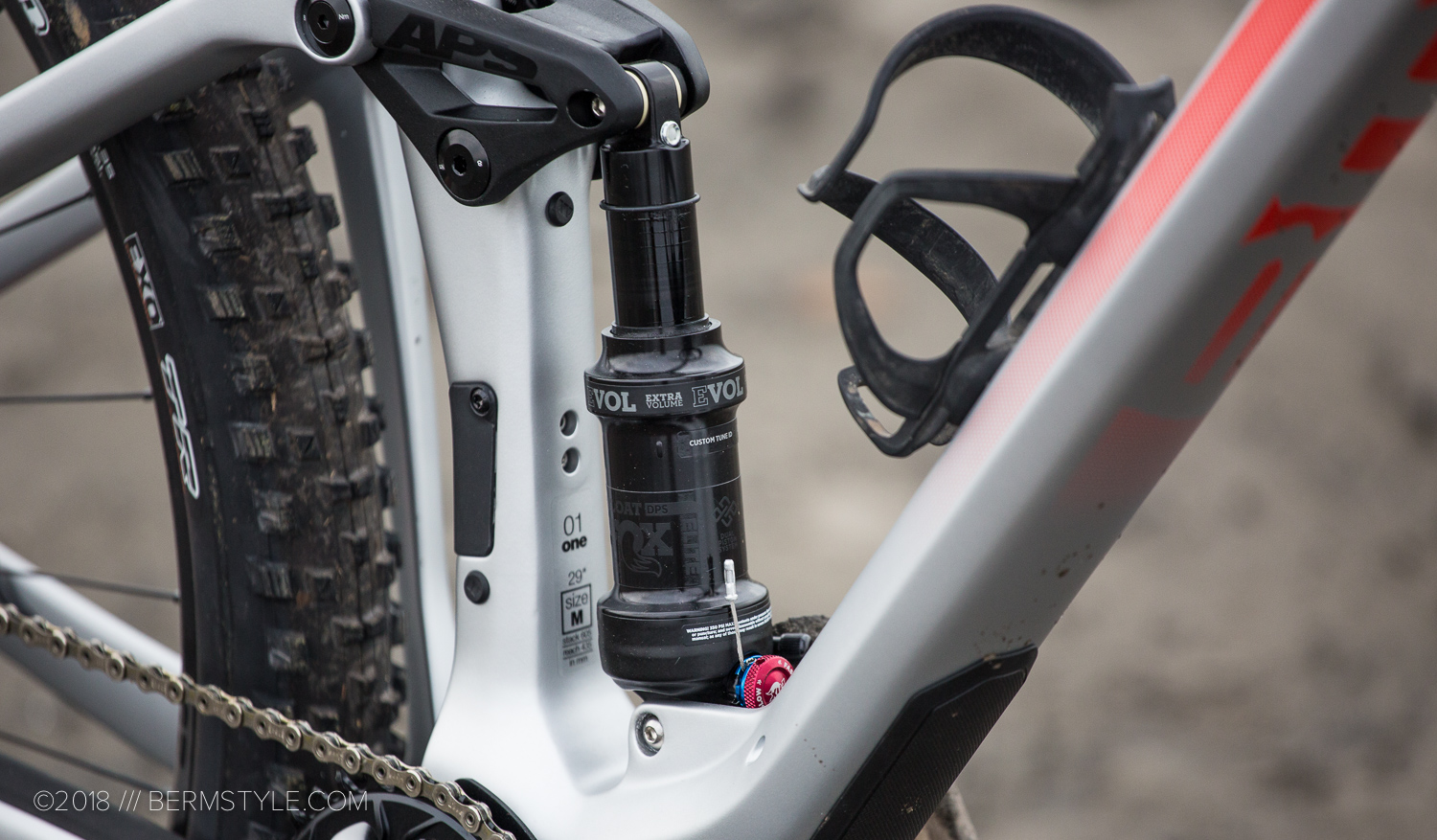 Dropping the seat post actuates the rear suspension with the push of one lever.

Called Trailsync, the action of the shock is now synced with the height of the post. While the post is up, the rear shock’s compression damping is activated. With the post dropped, the shock is completely opened up in descending mode. No more reaching down to mess with a lockout or extra controls on the bar, the result is a snappy feel when jamming on the pedals.

The integrated design allows the use of an oversize diameter seat tube. Allowing the use of larger (and theoretically more durable) bushings, it features a mechanical design that is user end serviceable.

Saddle adjustment now comes via the seat clamp assembly similar to integrated posts being found on road bikes, with two seat clamp heads available should they be needed. The post uses an air spring for the return, and hides a Schrader valve under the seat mast. (Sizing the post for Inga required removing the seat clamp and carefully cutting down the post.) 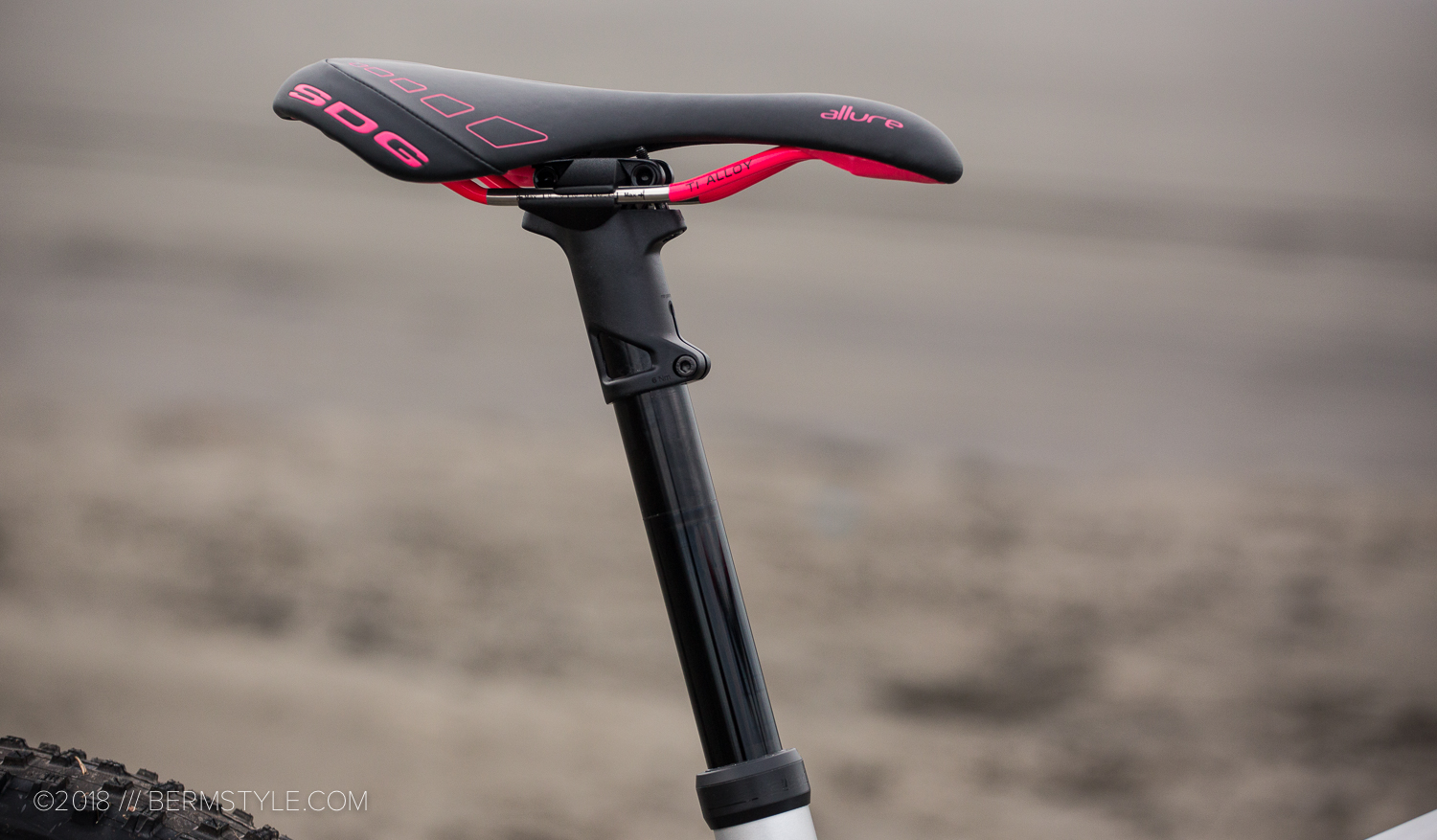 Saddle height on the Speedfox is performed via the seat post.

Aside from carefully cutting down the post to size it for Inga, assembly of the Speedfox was fairly standard. Although the operation of the post is mechanical, the frame features ports to facilitate service, and it appears to offer additional installation options for electronic shifting. As we receive product support from Shimano, we’ll be replacing the stock SRAM drive train with Di2 over the coming weeks and will be finding out first hand. 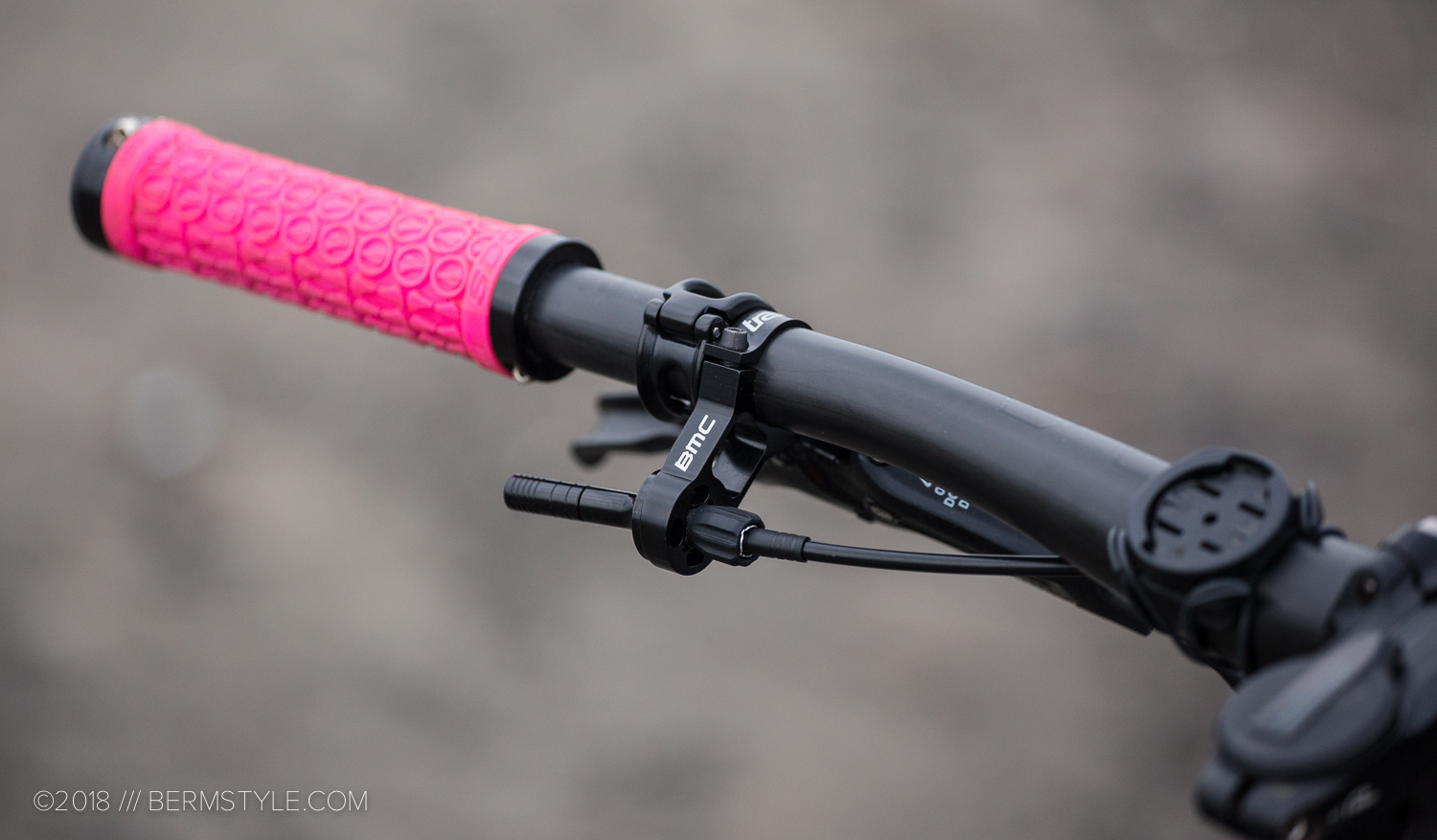 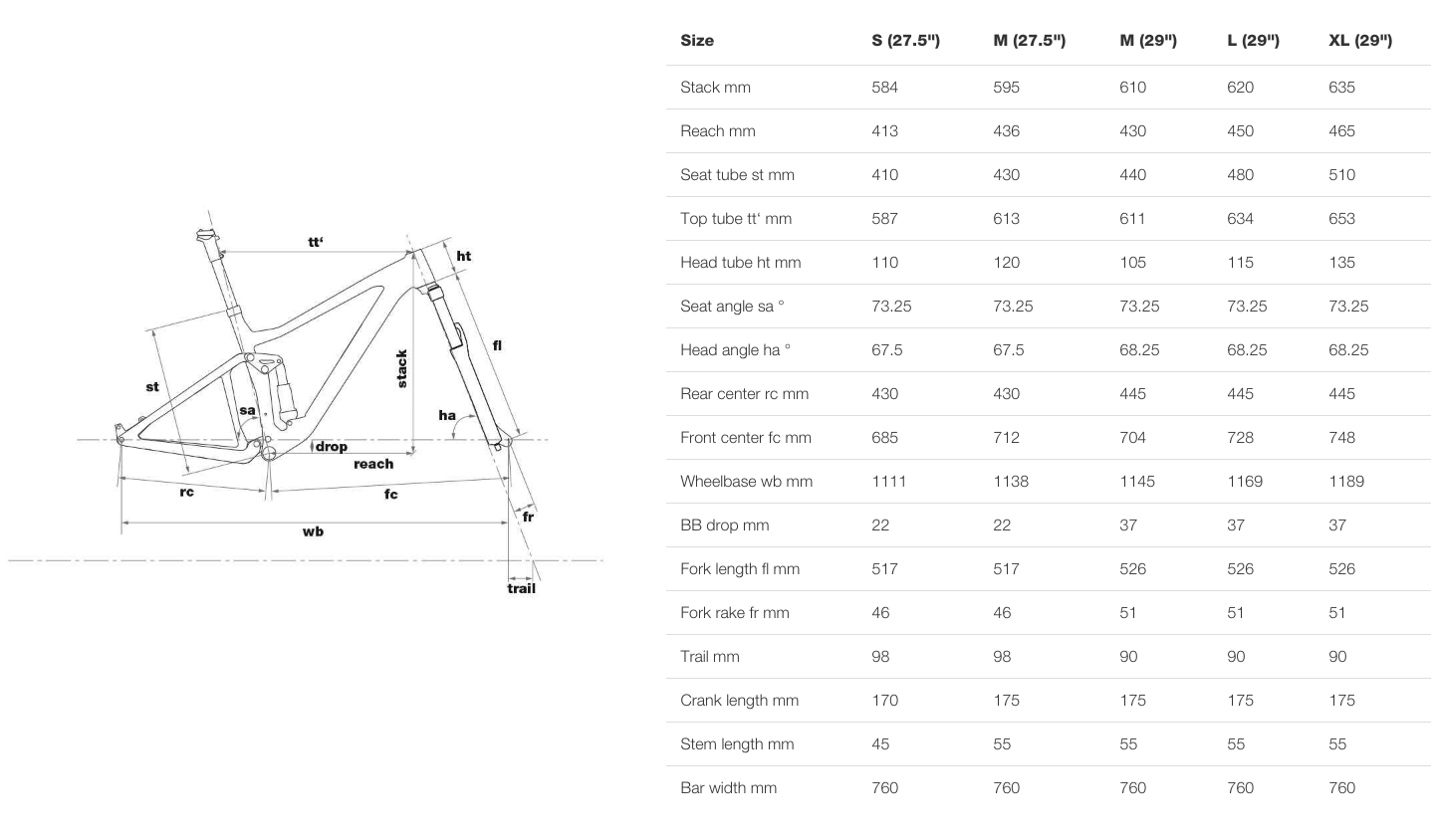 With less suspension and dropper post travel, Inga’s new Speedfox is decidedly more trail and XC oriented than the previous year’s model, so for the first ride we headed to the coast to ride XC-oriented trails. One of our favorite routes is on the short side, but is twisty and root filled with a slower tempo ideal for XC bikes. 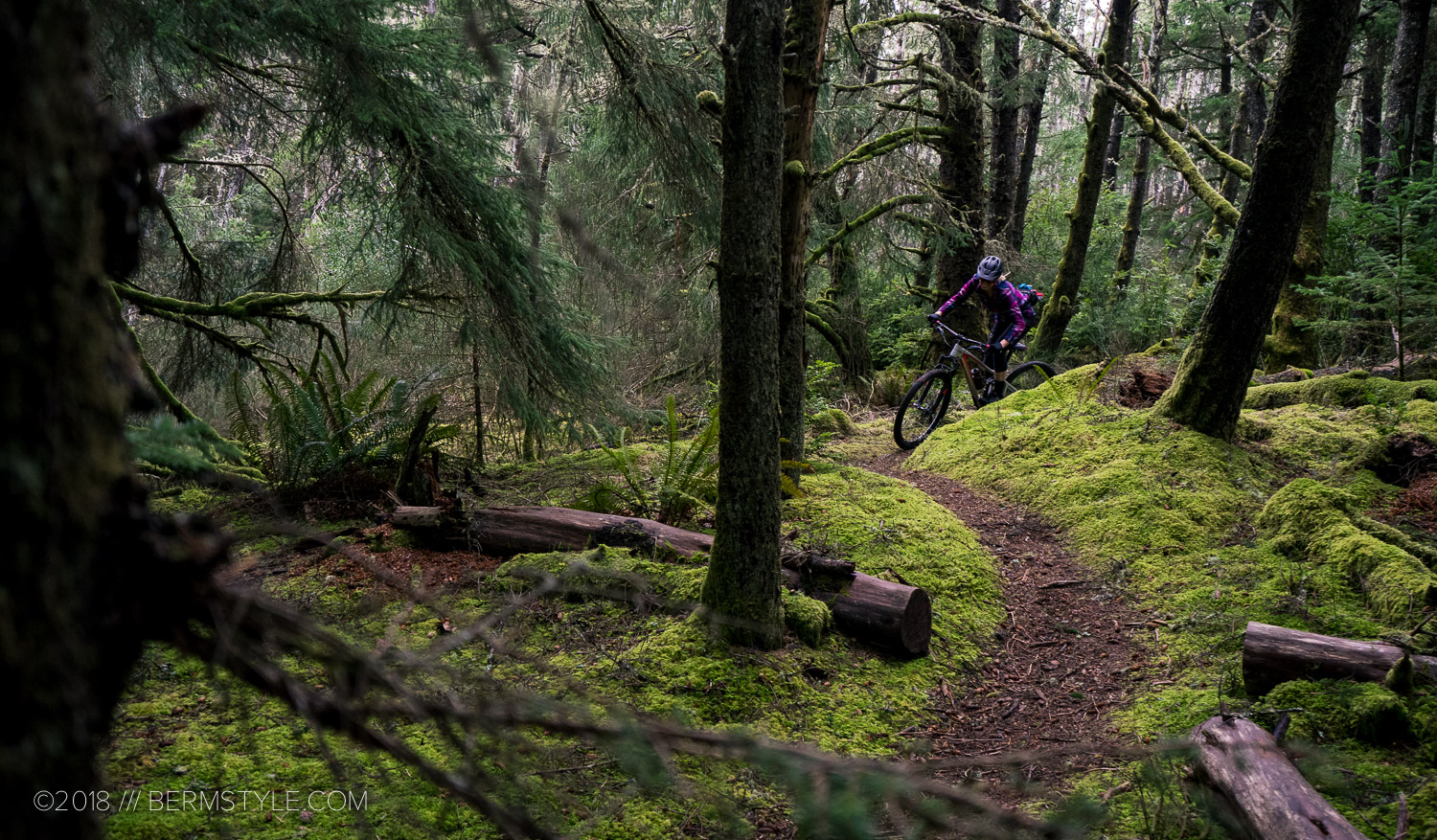 The trail occasionally opens up for some quick and short descents through loamy and sandy tread. It’s the kind of trail that works well on a hardtail (I was on my hardtail with Inga on the Speedfox) as well, as the soft surface takes more effort to keep momentum on. On a typical dual suspension bike, you’d generally set the compression somewhere in the middle and just take the beating on the rooty sections, as you don’t have time to reach down and flip the shock settings. 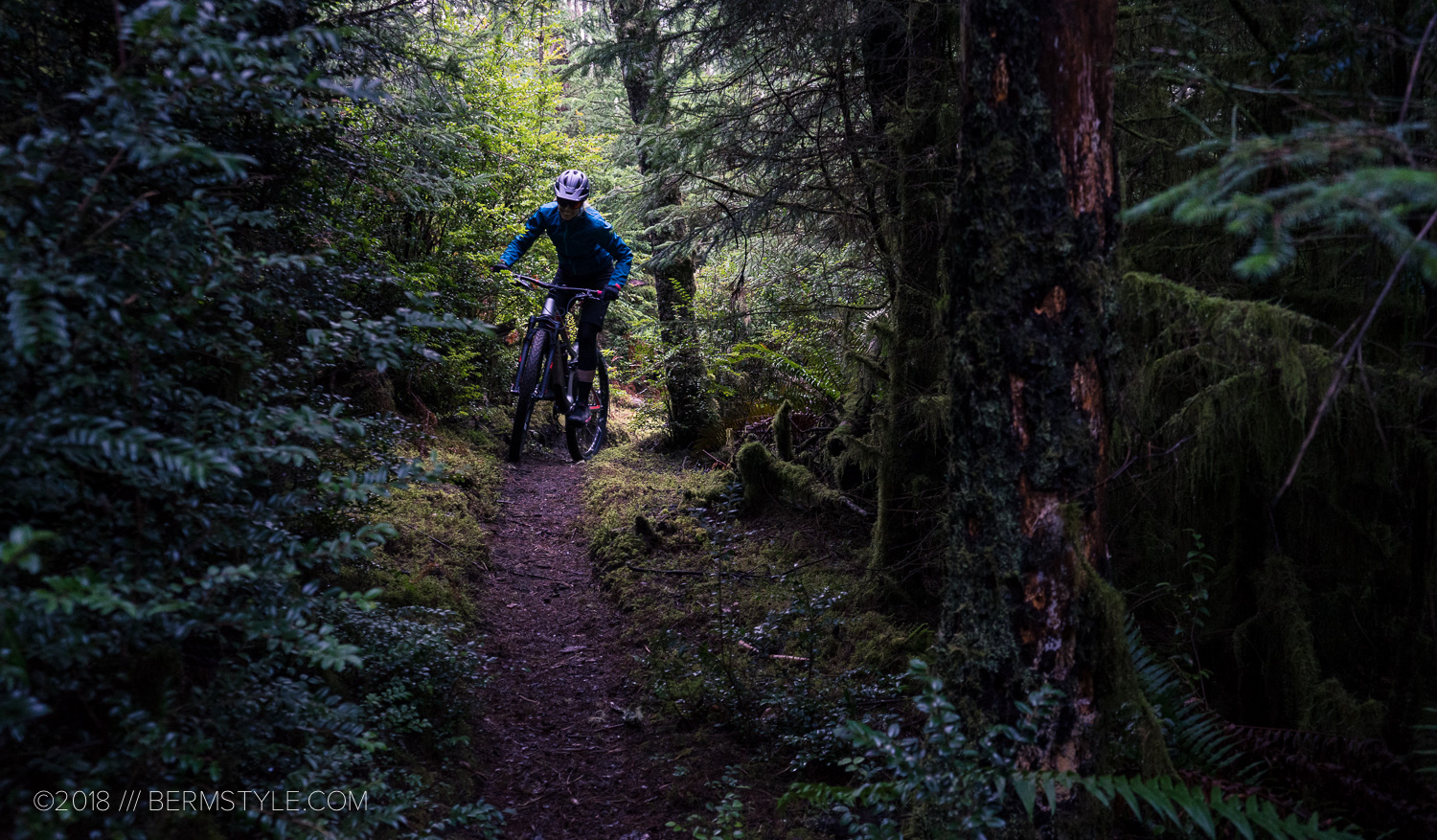 It happens to be the type of terrain the new Speedfox excels at. In use Trailsync means you’re actually utilizing the compression settings on the rear suspension on aggressively paced rides. It just works.

While the new model has a lot of similarities to the previous model year, the new Speedfox is a reimagining. The previous model featured 130mm of front and rear travel; the new iteration drops 10mm from both the front and rear. The rear center actually grew 10mm in length as well, with a decidedly more XC-marathon trail flair versus the all around trail flavor of the model that came before.

Is it a quiver killer? It seems it will depend on your quiver. Here in the PNW our trails run from the more tame (think hardtails) to the radical (think enduro bike) and the changes do seem to limit the use of the new Speedfox to less aggressive trails. Where the previous model was more than up a few runs in the bike park after an all day pedal, not being able to drop the post all the way is a limiting factor.

We don’t think there really is a “one” bike solution, but as a possible two MTB solution, the Speedfox could make a lot of sense for some riders. The efficient and spry suspension feel on the trail has her questioning how much she’ll actually use her hardtail this season. In conjunction with an enduro rig, she’d be well set for riding this season.

If you’re in Portland, the local BMC dealer is Western Bikeworks.