First off, a disclaimer: Fisher Bikes is a sponsor of the Subaru/ IMBA Trail Care Crew. We couldn’t really say anything bad, much less publish anything bad about this bike. The good news: we don’t have to.  That said, reports from the field all over are that the Roscoe is the best trail bike Fisher has ever made. We agree. The Roscoe fits in the niche between a 4″ travel XC bike and a 6″ travel all mountain machine with 5.5″ of travel. Billed as a long-legged trail bike, it fits in between (parent company Trek’s other models)  the Fuel and the Remedy. 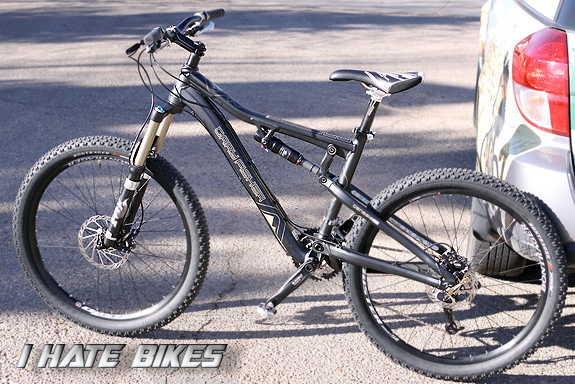 The Fisher Roscoe One in it's stock configuration, out of the box.

A few things stand out about the bike. One, the E2 headtube has 1.5″ lower bearings with 1 1/8″ at the top. We are definitely fans of 1.5″, having ovalized frames and cracked headtubes on our own 1 1/8 bikes in the past. Not only does it give me warm feelings of security, but combined with the 15mm through axle Fox Float fork, it really helps make the front of the bike feel solid.   Trek/ Fisher claim the fork steerer is lighter as well, though the weight savings is offset by the additional weight of the (stronger) lower headset bearing. 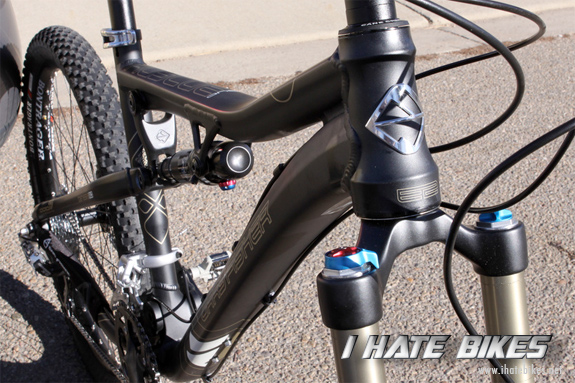 Close up view of the E2 headtube.

Two, the Fox RP23 DRCV rear shock is supposedly the new hot ticket in air spring design. The general idea was to create a air shock that feels more like a coil spring, with the adjustability and light weight of an air spring. After coming off of the new 2009 Intense Tracer VPP with a standard RP23 that bottomed out badly on harsh hit, this shock feels great. NO complaints here, and we have been putting the bike through its paces in the short time we have had it. I’d had lots of discussions about the shock, but I won’t bore you with the details other than to tell you it works, and well. We’ve ridden trails, dirt jump trails, drops, and bigger jumps. Again, great news here, no complaints. 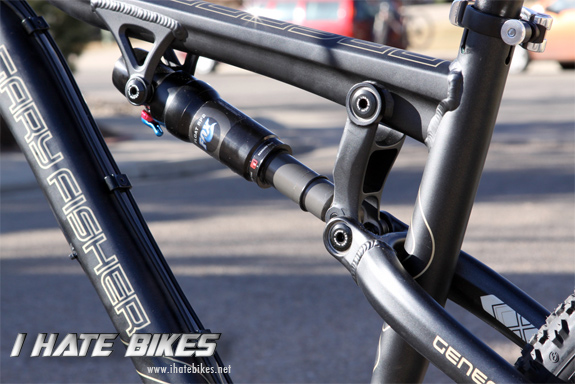 Close up view of the hydroformed top tube and shock

The third item: ABT rear suspension. For that we reference the Fisher website:

Active Braking Pivot (ABP) Active Braking Pivot (ABP) is a patent-pending technology that puts the rear suspension pivot concentric to the rear wheel axle. ABP creates the most active suspension system under braking. Thru-Axle Qualities By placing the pivot and bearing in line with the axle, the skewer actually threads through the pivot, which reinforces the entire rear end. The ABP system’s stiffness is very similar to a very lightweight thru-axle system.

So far, we’re stoked on ABP. (In fact, I’m so sold that I’m putting the new Trek Session 88 FR on order for my new personal FR/DH bike.) The rear suspension feels good in all conditions thus far. When I don’t have to think about tuning my suspension on the trail, and can just focus on the experience, I consider that a sucess. There is one thing I’m not so sure about, item number four: Fisher G2 geometry.  Back to the source for this one:

G2 Geometry started out as a project to improve the slow-speed handling of Fisher bikes. Fisher’s existing Genesis Geometry already excelled in climbing, descending and handling at speed. The one area we wanted to improve its handling was in tight singletrack and technical climbs. G2 accomplished this by increasing the amount of fork offset. This reduced the amount of trail to make it steer quicker without changing the rest of its handling characteristics. While increasing the offset, we reduced the reach to the handlebar to allow the rider to weight the front wheel more accurately.

I haven’t yet drank the kool aid on this one. It’s not a good thing or a bad thing, but the fact is, we like our bikes all-mountain capable, and ready for ANYTHING we come across on the trail (including big gaps and hip jumps). As downhiller/ freeride types, I like the way my other bikes ride, and I’m used to it. It isn’t a judgement for, or against the Roscoe and G2, but how we are and like to ride. The bike as is, has quicker handling than I personally prefer. In fact, I would love to try a standard 6″ travel Fox 36 or Rock Shox Lyrik on this bike. (we’re working on getting a test fork to demo as we speak) That said, on a recent trail ride at Boulder’s Hall Ranch, I had the bike pinned on the downhills. I felt really sketchy banging through on rock gardens at speed though. 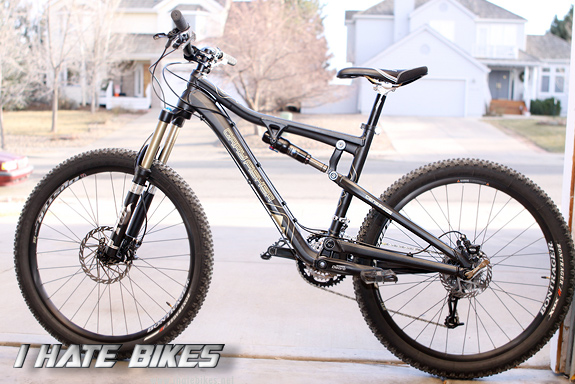 Our Roscoe, ready to roll after our spec changes.

Enough on that. Let’s go on to our set up: the first thing we did was remove the bars, stem, and pedals. The Bontrager bars were nice and wide, but we’re not interested in testing the bars, so we installed our current fave, Race Face Diablolus DH bars. The long 90mm Bontrager stem doesn’t work for us at all, so it was replaced by 50mm X4 stems by Thomson, our favorite trail ride stem. The Crank Brothers pedals were replaced by Sun Ringle Flats, on one, and Kore flats on the other.

For our first shake down ride, our plan was to hit up the Hall Ranch Trails outside of Boulder, Colorado. (see post here) Before we headed off to ride the trails, we hit up the Gunbarrel Trails at Eaton Park, and hit up the dirt jumps there. 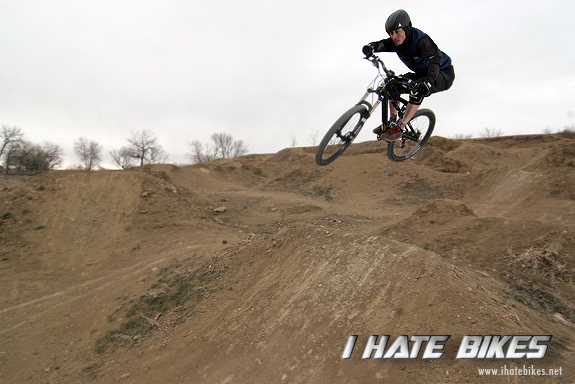 Floating the Roscoe through the intermediate line at the Gunbarrel jumps

The bike actually pumped through the smaller, tight trannies decently, especially once we locked down the compression damping with the pro-pedal lever.   The ride at Hall Ranch went fairly well too. To read about that, click here: As for it’s trail riding capabilities, every other magazine and website will tell you that- it’s Fisher’s best trail bike yet, blah, blah, blah. Yes, she works, and well on the trail, and is a capable trailbike. What I really wanted to know though, was how this bike would handle with the big boys, ihatebikes-style. With the short stem, bars, and flats, the Roscoe has a profile that looks a lot like a factory four-cross or slalom sled- all it was really lacking is a chain guide. Our hosts, Tammy and Jimmy Donahugh took us to an undisclosed spot outside of Boulder to get a big hit experience logged in.

Thankfully, she handled like a champ. It took a bit to get used to the light weight, but we sessioned a line that started off with a small sized drop. 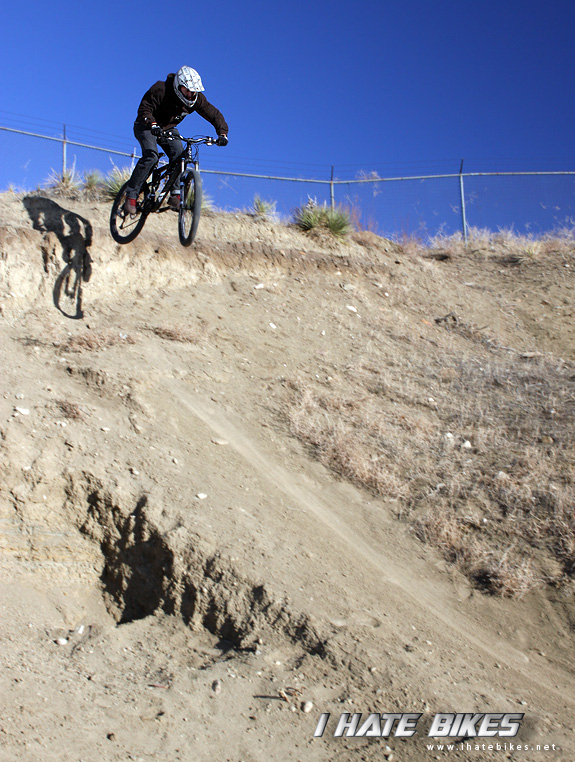 Dropping in on the Roscoe

The drop ran out into a good sized table with a nice big step down landing. I wasn’t quite comfortable to boost it yet, but I managed to pull off a no hander, even when Shawn’s dog ran in front of me. Again, the front end is more twitchy than I prefer for jumps this size, but then again we are taking this bike completely out of it’s intended use. Or are we? Todays rider’s expect more and more from their bikes. I’ve also heard rumors that Greg Watts will be riding one (most likely customized) for slopestyle applications. 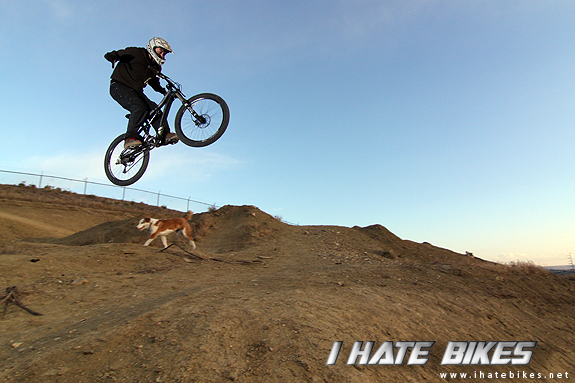 Aboard the Fisher Roscoe: no hander over Shawn's dog 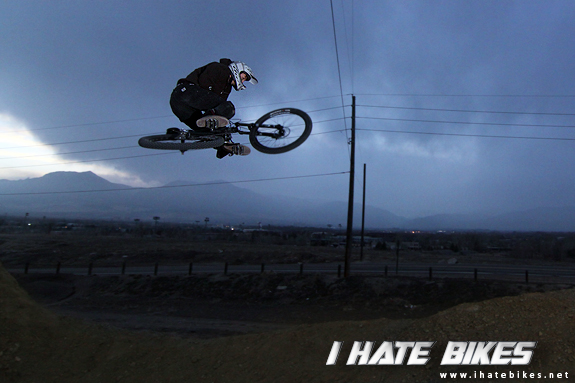 Getting flat on the Roscoe

In conclusion, we’re happy to say the Roscoe has exceeded our expectations as a capable trail bike, and with slightly heavier wheels and fork change, could even cross into all-mountain territory. The spec on the one is a bit weak, but inline with offerings from competitors. The heart of the bike is solid, and definitely worth hanging one better bits as one’s budget allows. We’re confident that she will hold up for us. Our preference leans heavily towards an all mountain style of riding, and we’re looking forward to testing the bike with a 6″ travel fork to see if she can hang with the Remedy at places like Downieville.