Things are seriously moving along with the Eichler Bike Park Project. If you haven’t been following the story of the Eichler Park Jumps, click here for a recap. It’s been pretty exciting to see progress on this site finally happening, with a legit Bobcat on site moving earth.

It was just over a year ago when we posted an article on the dilapidated BMX Park spotted in Beaverton, Oregon. (A suburb of Portland, we actually rediscovered it taking a test drive while car shopping nearby) We were going stir crazy while living in Portland about the lack of local riding spots, and spent a lot of time riding around scouting for a spot where the barriers to getting something legal to happen were the lowest. We found sweet secret and shuttle friendly trails, (albeit on private property) a few secret dirt jump spots created for pro level riding, and more. However, none of this stuff was sustainable, and none of them were spots that were likely to be around for long. Several were in danger of being dozed at the time as well. This location was different, as it already was technically a public BMX park. It just needed a serious reboot.

It is amazing to see how a simple blog post could be a catalyst and generate so much energy from the riding community. In an area where all the riders share the same frustration with local riding opportunities, momentum quickly built, and all the key players were able to leverage their contacts to make progress in record time. Park officials were open to the idea that the area would get more use and be a bigger assets to the community as well. Times being what they are, they were ready to offer the go ahead with the right partners, but lacked funding to participate directly. This is where the local advocacy group, the Northwest Trail Alliance stepped in to make things happen.

A lot of mountain bikers I know could care less about the advocacy work groups like the NWTA do. However, without the backing and full support of the NWTA, (thanks Joe and Tom- they really were the ones that made this project happen) a legitimate non-profit organization complete with insurance, this project wouldn’t have moved forward. The timing couldn’t be better either. Many gravity/DH/FR members were unhappy about their lack of representation in the groups overall efforts, and it resulted in the timely formation of a FR-specific gravity committee to focus on efforts in creating opportunities for this style of riding. With a project ready to go, riders hungry for the opportunity seized it, and once the insurance issues were worked out, an MOU (memorandum of understanding) with parks was signed, making the NWTA a steward of the park, and officially green lighting the project.

Put it over.. there.

This project really demonstrates the get-‘er-done ability of a tightly knit riding (freeriding) community, something that Portland has in spades. (I just wish the Bay Area freeride community was as strong- we’d have a lot more legal stuff to ride already) All we did was point out the opportunity, and the riders grabbed the ball, and have made it happen.

If you’ve never worked towards getting a new trail built, or legal dirt jumps, a year to get something from a dream to in the ground is amazing. Most often, the kids that ask for the parks have grown up and moved away by the time progress has been made. (in our case, we moved back to the Bay Area for financial reasons, and can only report on the progress remotely) As we’ve been discovering, getting a  bike park built is only half the fight. Having permission and motivation to keep it maintained is just as important.

Enough already with the backstory, and on to the build report from Raul:

Jason- We had over 20 volunteers thru out the day. We worked from 9:00am to 4:00pm, and the park is coming along great. The next big build day will be June 11th.

Big thanks go out to Tim Zimmerman for documenting the work of the volunteers and lending the use of his images for this story. Enjoy the gallery. 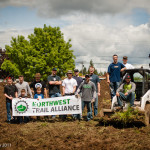