Mountain bike trail options in the East Bay Area just got better. We recently rode miles of bike friendly single track, all less than two months old. AND, it’s not only a bike friendly trail, but designed specifically to enhance the mountain bike experience unlike any other trail to date in the east bay. The biggest shock? It’s on land managed by the East Bay Regional Parks District. 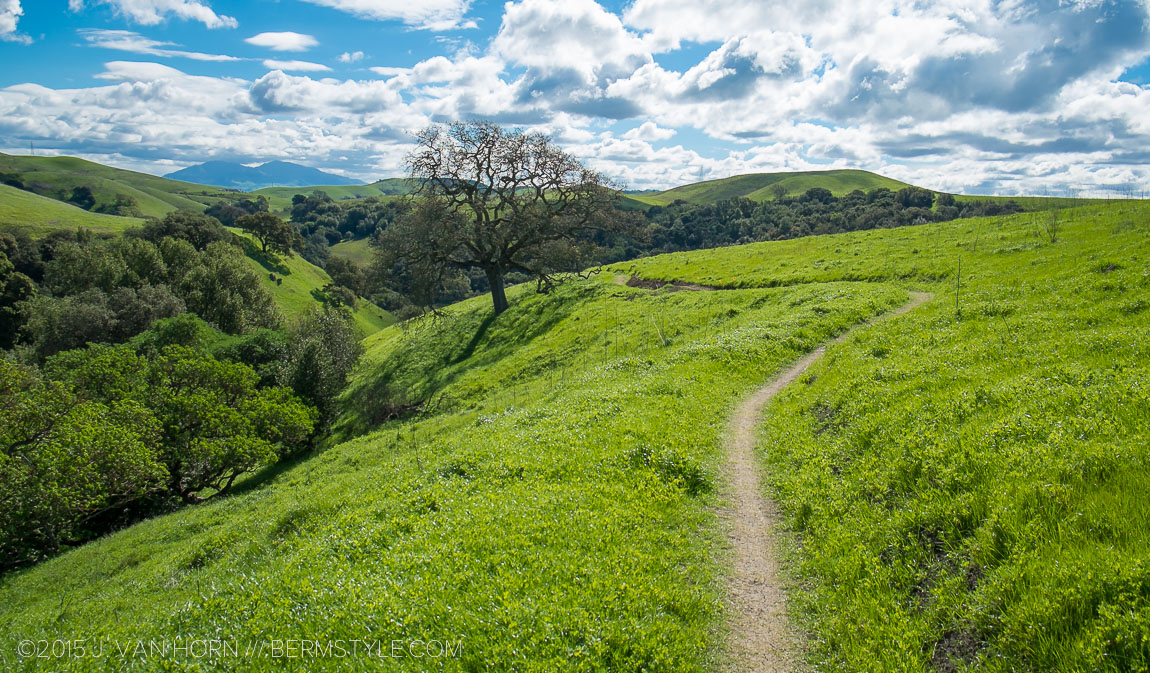 Starting down the new single track.

The trail work day was led by Nat Lopes of Hilride, and there wasn’t a shortage of trail crew leaders, so I decided to pack my camera instead and document the progress. 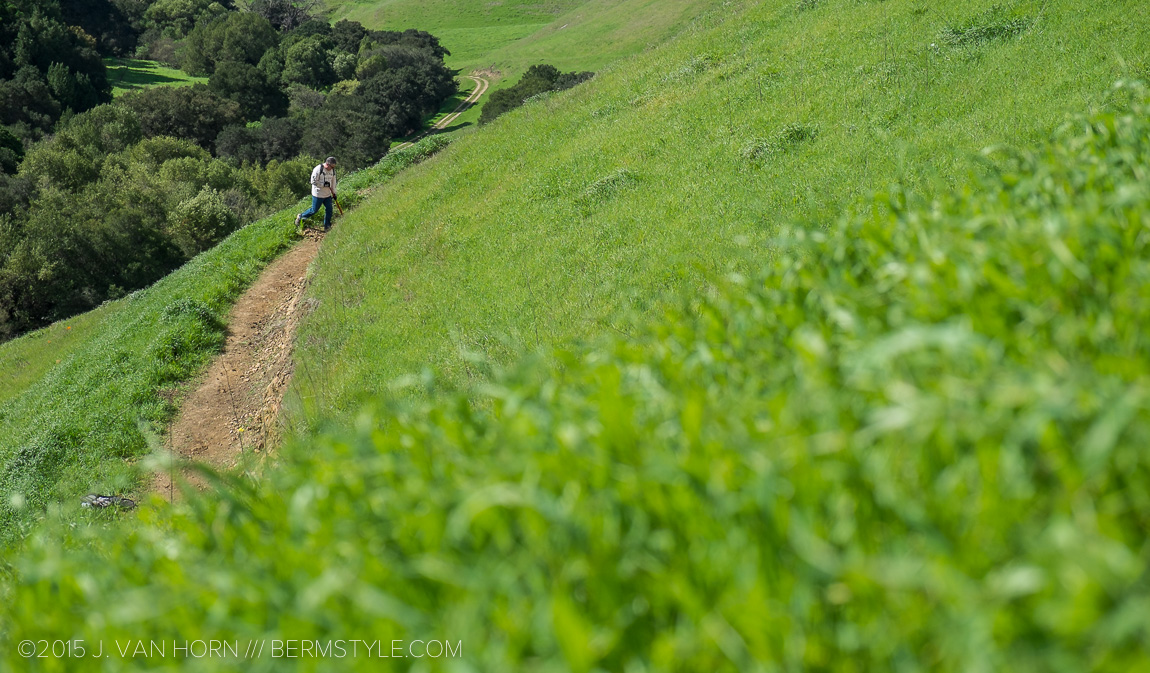 A few years back we visited Crockett Hills Regional Park to check out the mountain biking option. We did a ride and recorded what we experienced, but it was a major disappointment. Most of the trail was overgrown with grass, and the trail was somewhat uninspiring. While the alignment of the trail was great, it was straight line pedal through grassy fields. (we documented in this post dated May 15, 2011)

This isn’t the same Crockett Hills. 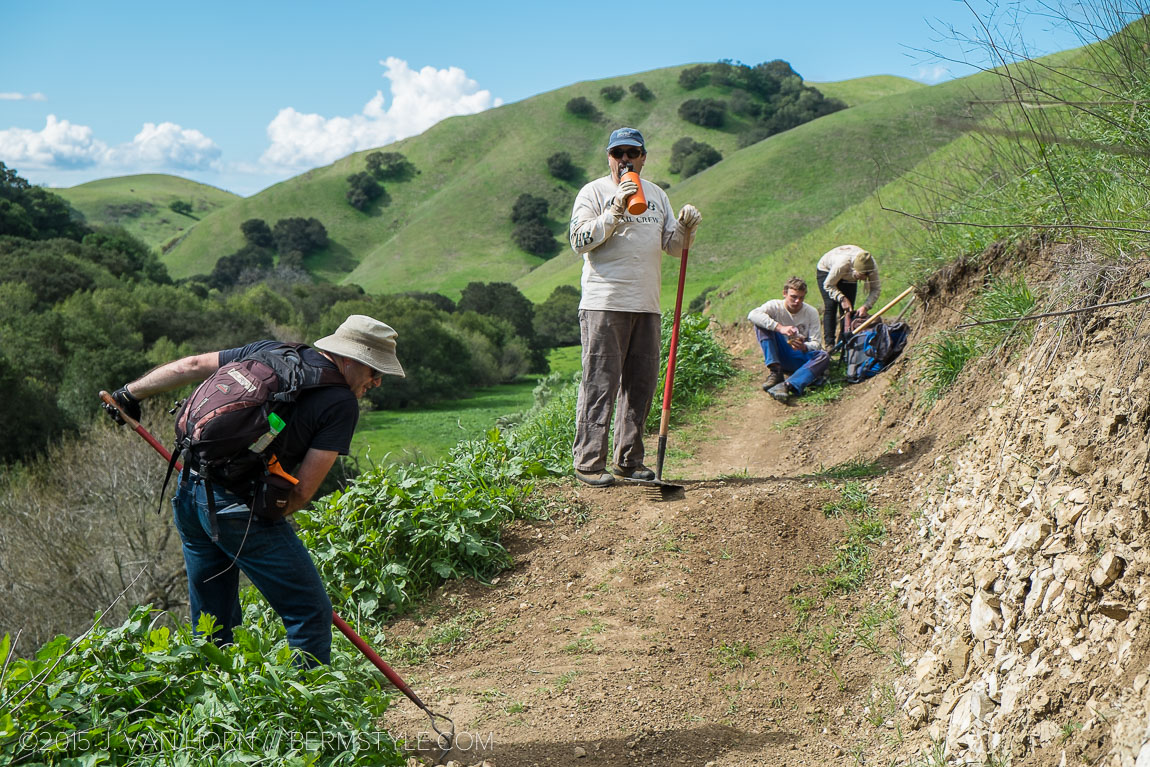 Hilride’s Nat Lopes and some of the trail crew at work.

Hell yeah — I’m on new single track trail on East Bay Parks land. It’s legitimate single track too. Twisting and turning through grassy fields, the thread of hard packed soil undulates up and down and back and forth. 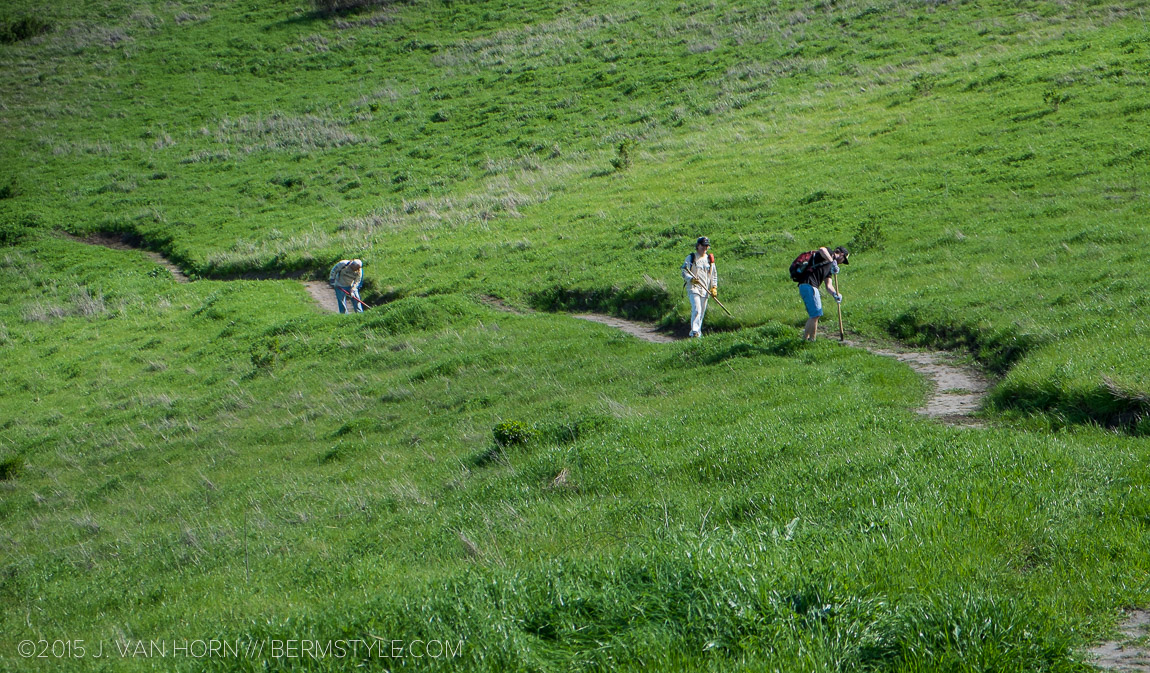 Grass grows quickly here, and what was a four foot wide bench cut has quickly become a narrower ribbon of trail.

I’m amazed. There’s a roller coming up, and I lift my front wheel into a manual, pumping down the backside. Then another one, which leads in to a bermed turn. A bermed turn. Holy cow. 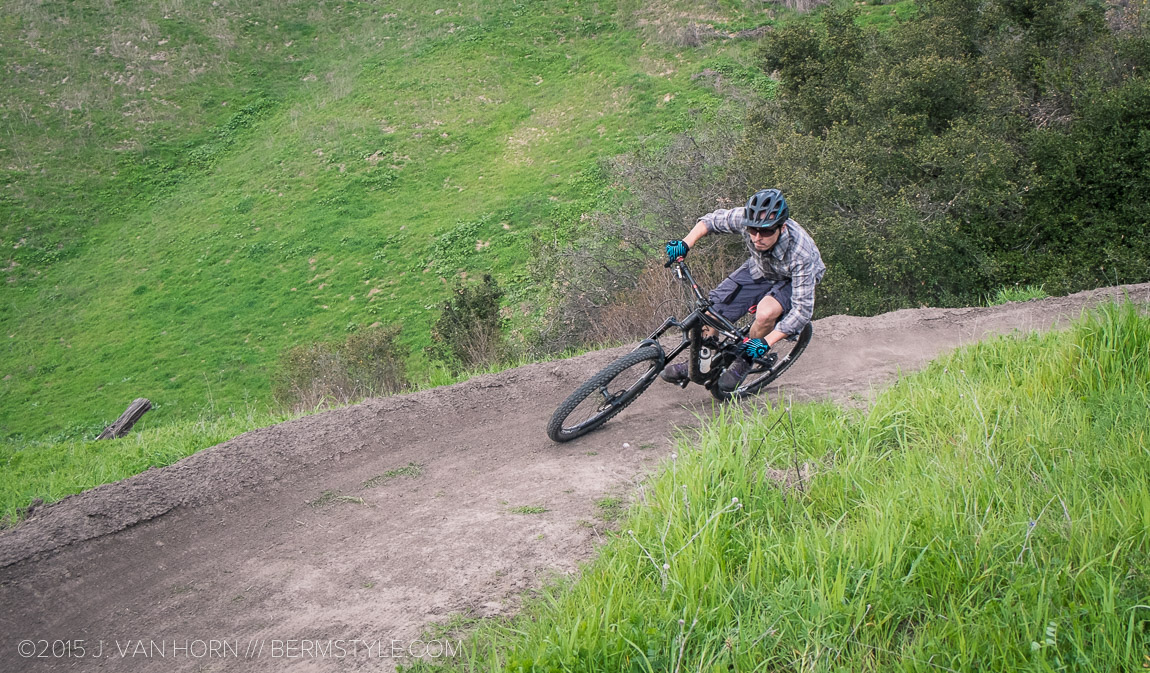 We not only have a new riding spot in the East Bay, but it’s a legitimate single track trails destination. Rollers, berms and even table top jumps offer options for getting rad and even take to the air. The jumps are small, but fun. And it doesn’t stop. I keep expecting the trail to turn smooth and flat, like the sections Inga and I explored four years ago. Remarkably, it doesn’t. In fact, it keeps going, and continues to get better. 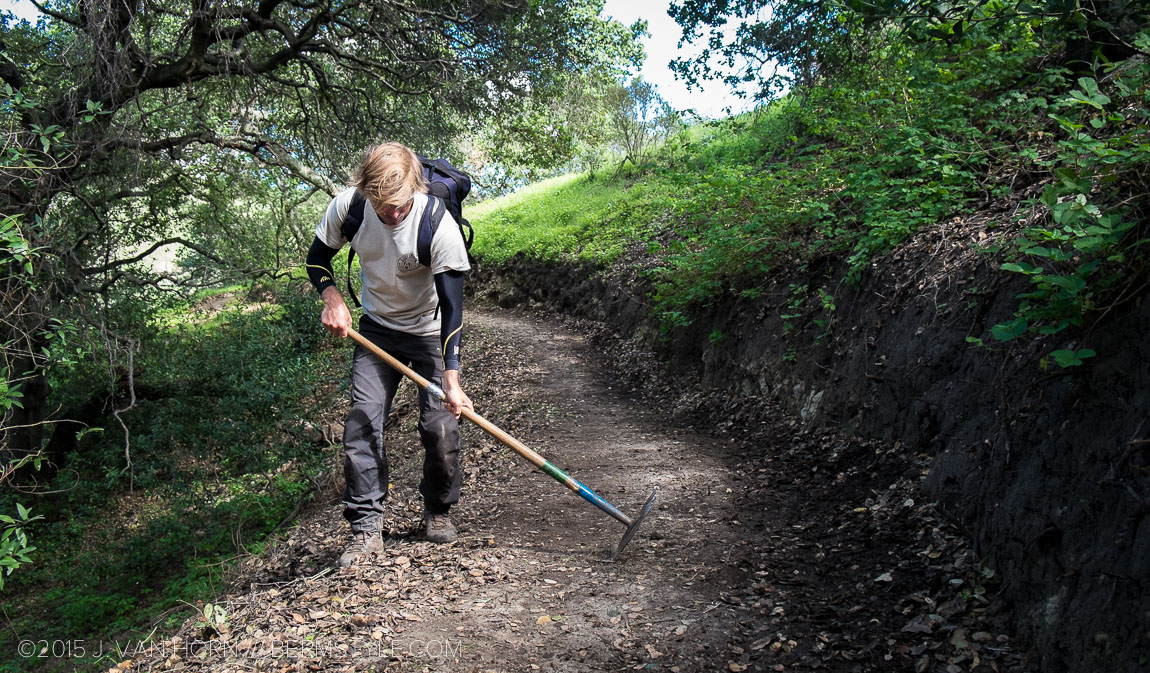 The grass doesn’t grow as quickly in the tree covered areas, and the fresh bench cut is still evident here.

The trail building day was put on by the EBRPD Trails Development Program who have invited the Bicycle Trails Council of the East Bay to work on the recently cut trails at Crockett Hills. Working with the architect of these trails, Nat Lopes of Hilride, several EBRPD employees along with 40 volunteers were cutting back slope and performing finish work on the tread of the bench cut that was performed by Sweco operator Jim Jacobsen. (famed builder of Tamarancho, parts of China Camp, as well as parts of Joaquin Miller Park to name but a few) These trails were designed and built for mountain bikers specifically, and they’ve already completed more than 6 miles of new trail.

A Sweco is a mini dozer, frequently used in the construction of single track. Its relatively narrow 4″ wide blade allows maneuverability, but more importantly, is capable of cutting narrow single track, and is a favorite tool of trail builders creating bike friendly trail.

As most of the “trail” in the East Bay Parks district has been cut by full size bulldozers, this is in itself, a significant fact. 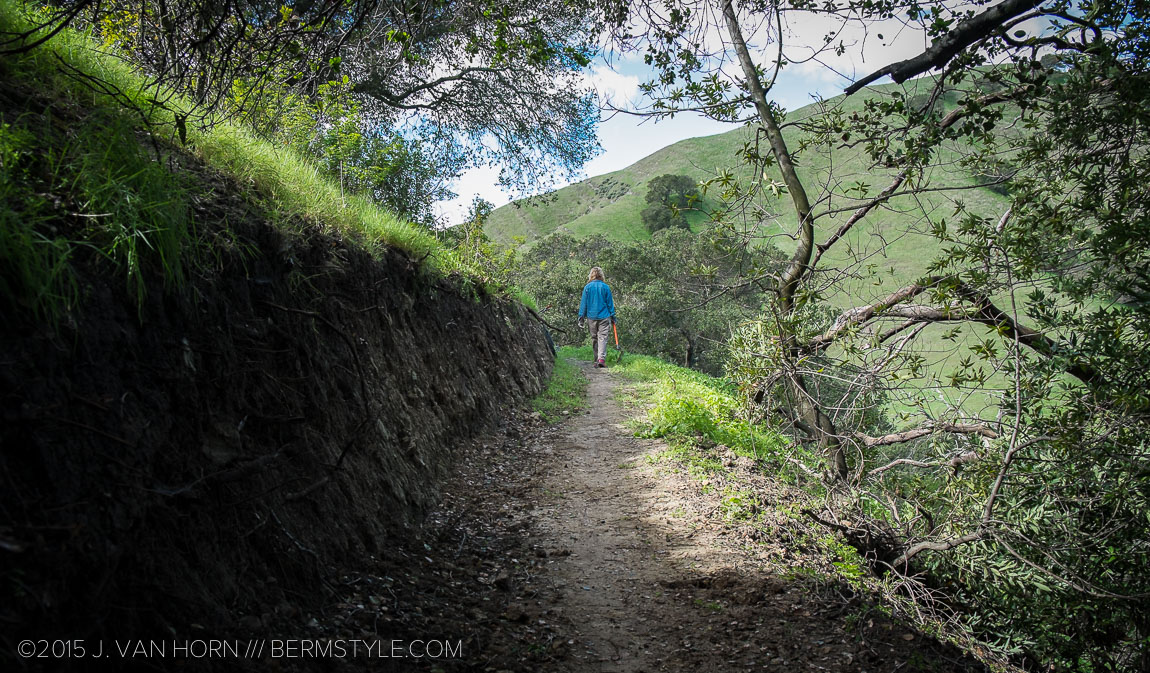 Although fresh bench cut often looks wide, in a few more months this will look much narrower and inline with the ribbons of trail through the grassy fields.

Nat has trail crews spread out over a few miles, with supervisors from EB Parks checking in, and transporting tools as needed. After catching up with Nat and other members of the BTC, I rolled further down the trail chatting with the crew and photographing them as I go.

Although the new trail was only cut a few months ago, the grass grows quickly here, and word has yet to spread of the trails existence. Much of the work revolves around cutting the grass out, and re-establishing the tread. The trail needs riders to ride it, but now that we’ve experienced it, I doubt it will remain the secret single track much longer. The word’s going to get out quickly — it’s that good. 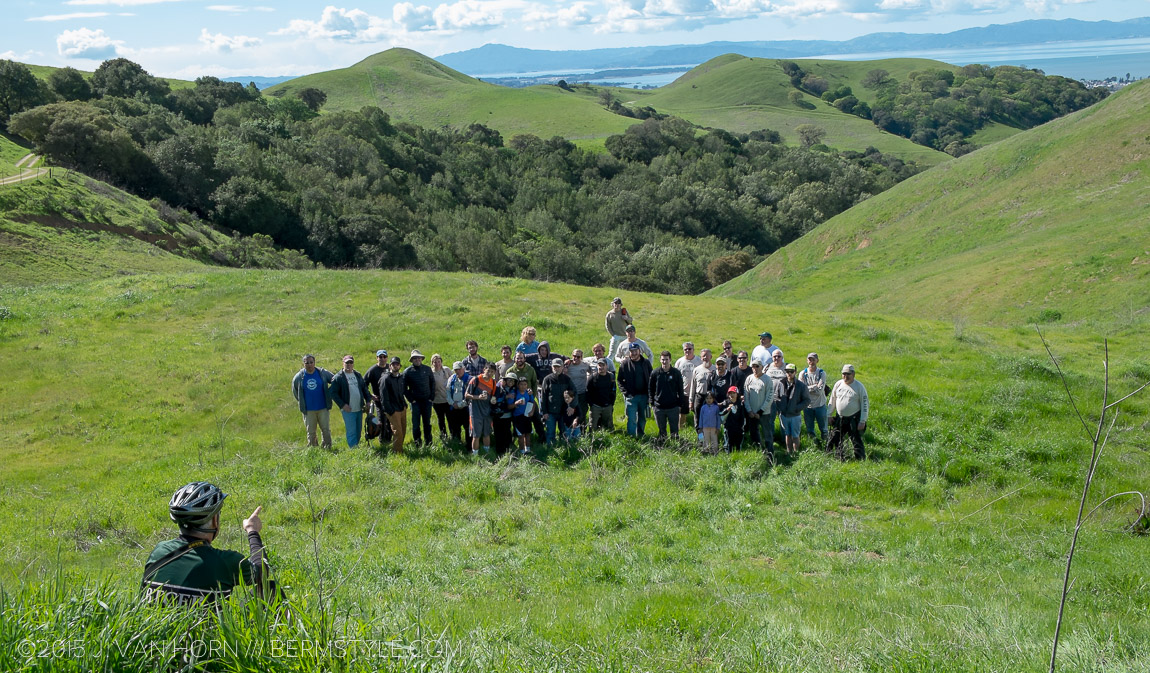 Michael Mejia of the BTC lines up the crew for a group shot.

At 12:30, the crews wrap it up, and head back to the staging area for lunch. Trail work is complete for the day, and after food and drink has been consumed along with a group photo, Nat announces the part everyone has been waiting for— it’s time to ride. 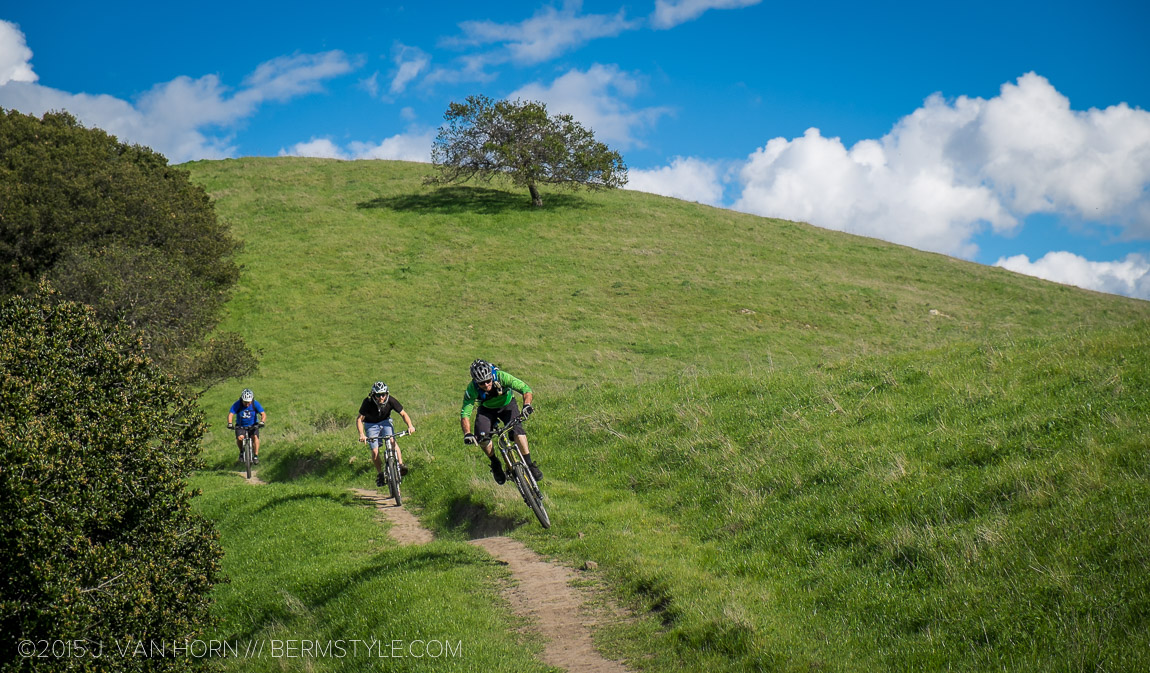 Dropping in, we file in behind Nat and pump down the trail over rollers and through berms. Not all the trail is complete, as backslope has yet to be cut on a number of sections. The sections with backslope already cut offer the options to air the rollers, with the side of the hill acting as landings. We alternate between bonking the tops of the rollers to kicking out to the left and the right on the way down, smiles permanently affixed to our faces. I’m still amazed a trail like this is actually in the ground on East Bay Parks land. 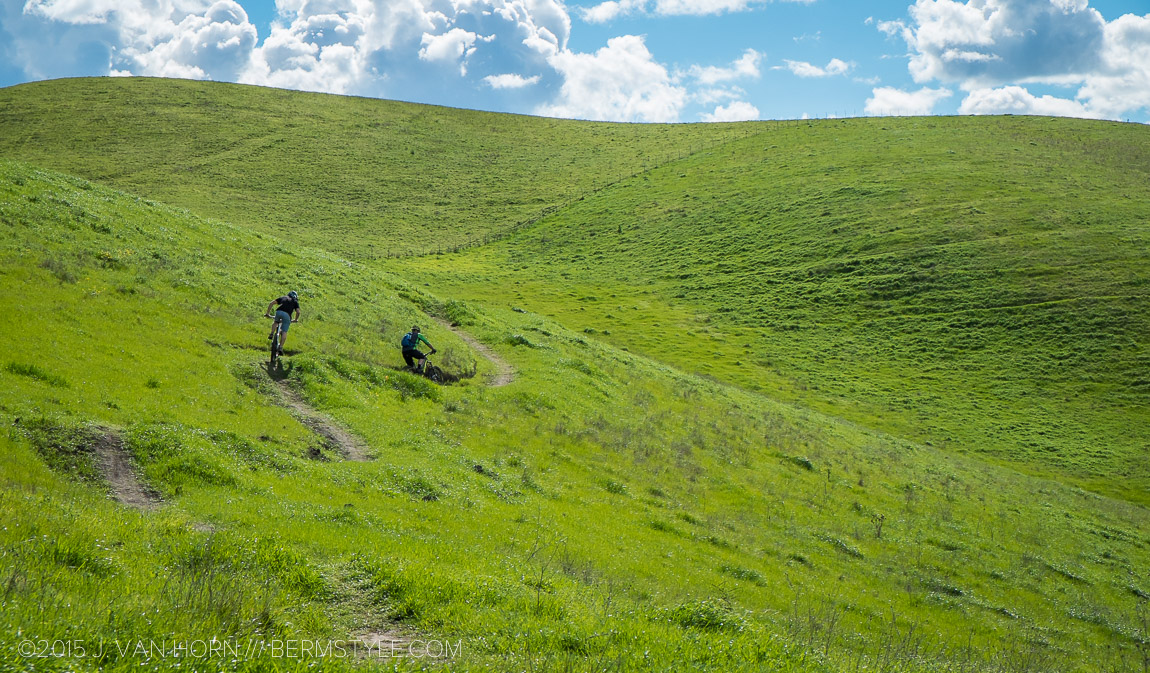 Nat leads us up a twisty single track at Crockett Hills.

It’s a treat to get to ride with Nat again— it’s been a while— and as we ride he fills me in on the various projects he and Hilride have been up to. Eventually we hit the end of the trail and he points out a line of pin flags through a field of grass into the distance. At the moment, the trail is mostly an out and back, but there are a few options for loops at this end of the park, and you can ride it as a lollipop. Eventually he hopes it will all be a long loop with options to ride it one way. The trail is fun in both directions. The climbs are up a mellow grade and the rolling grade dips and rollers add variety in both directions. 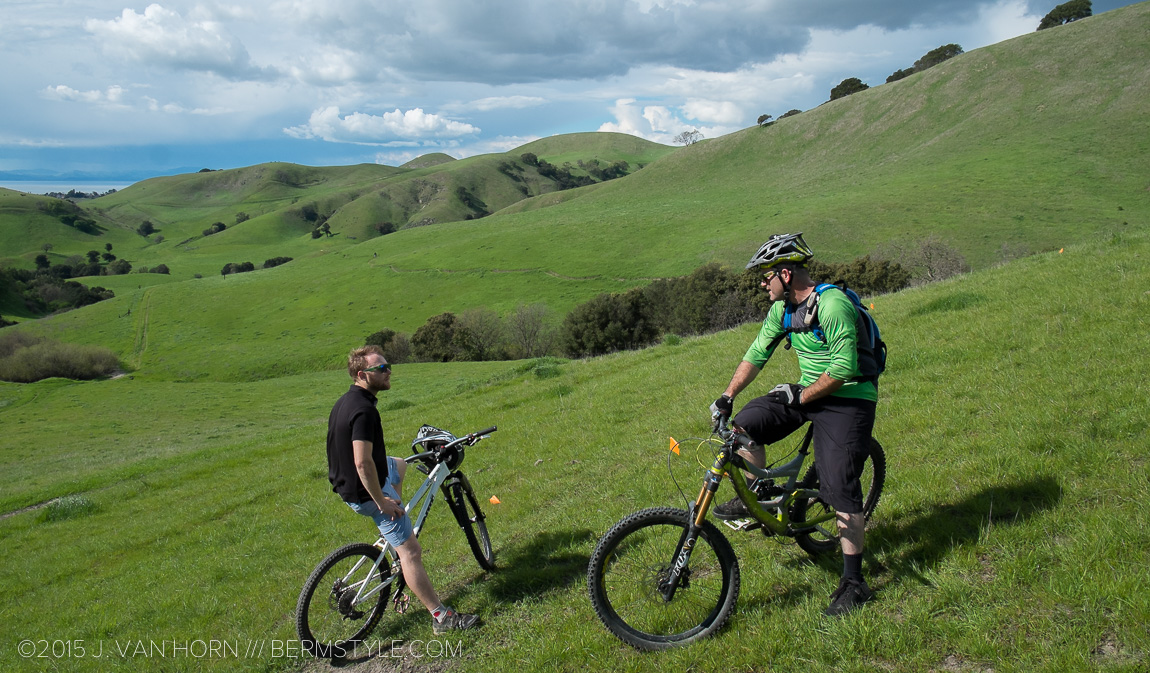 The current end of the line. For now.

Then we’re headed back the way we came, and enjoying every second of it. The table topped mounds of dirt are small and easily navigated by all skill levels but add major fun to what typically would be a rutted out cow trails in the east bay. A few months ago this was just another grassy hill in the east bay. Now it’s a mountain bike playground. 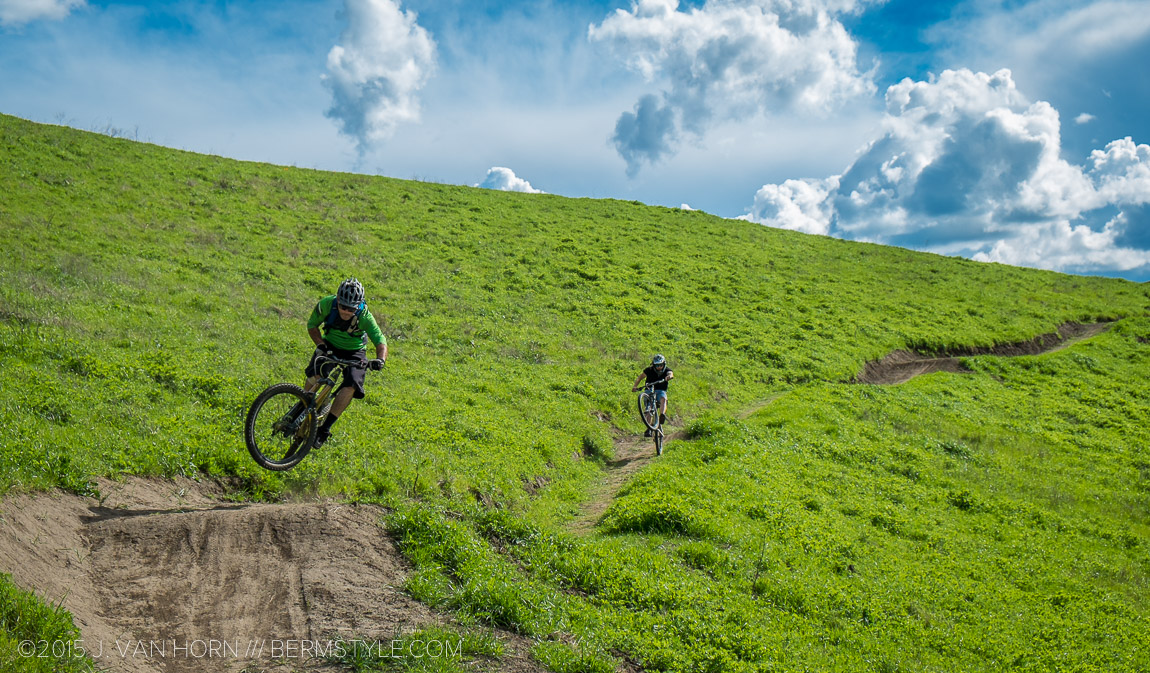 Charging back down the trail. And, those clouds…

A Bit On How This Came To Be

Although there are miles of sweet single track in the East Bay Regional Parks system, most of it is off limits to mountain biking. Mountain bikes are expected to stay on what are essentially natural surface roads, many of which are routed straight up the fall line up the steepest part of the hill, and aren’t much fun to ride. (see Briones) These natural surface “trails” are shared by hikers, equestrians as well as cyclists, and on any given weekend are well populated. Ironically, much of the narrow trail (aka single track) is devoid of users, with hordes of (often rude) hikers walking 2-8 wide, completely oblivious to other trail users. Riding in our parks can be downright unpleasant, and like many our weekends are spent piling into our vehicle to travel to more bike friendly (with better trail) destinations.

Crocket Hills Regional Park is a bit of a drive for us coming from Oakland. I clocked it at roughly 20 miles in the car. Rolling up to the parking lot you’re greeted with an abundance of spaces to park, as the park hasn’t been getting much use. We rode here once a few years back in 2011 and the riding wasn’t worth the drive. (see our post here, the Secret Single Track at Crocket Hills)

A year after we wrote that post, we attended a number of meetings that resulted in a major shift in how the park lands are managed, with amendments made to the master plan. The updated Master Plan was finally published in 2013.

The Parks page on EBParks.org