The Cane Creek Angleset has arrived, and is now in place on the Carbon Nomad. How does it ride? In a word, it’s glorious. Yep- that’s what I said.

Installing the Angleset was fairly straight forward, although special care was taken in lining up the top cup with the center of the bike. I started by pressing the lower cup in first, followed by the top one. I was a bit concerned about how easily the top cup went it as it took a minimal amount of force. (I probably could have pushed it in by hand) As top cups don’t take anywhere near the beating of the lower cups, and taking into consideration I have a slick plastic bike (read: carbon) I’ve taken a wait and see attitude as opposed to being massively concerned. I’m a few rides in and I’ve had no issues to date. 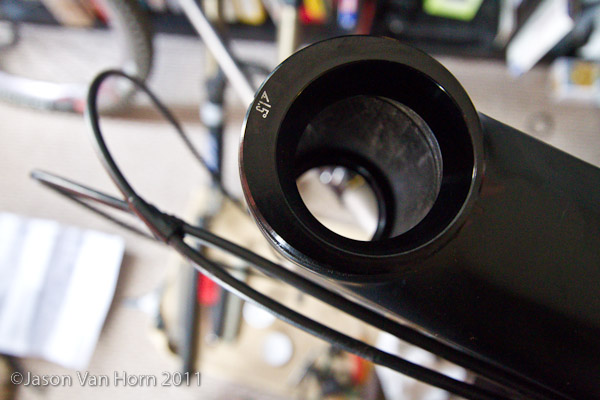 Top cup of the Angleset on a Carbon Nomad

Why slack out the head angle?

My reasoning for installing the Angleset was two fold, but obviously came down to wanting to customize the handling of my Carbon Santa Cruz Nomad. I wanted to lower the bottom bracket on the bike, and I wanted to slack out the headtube angle to give my ride more of a park bike feel, or to create the ideal XC/AM bike for downhillers.

There are a number of bikes available that I had previously looked at and tried out; most notably, the Intense Slopestyle. Highlights include slack angles and coil suspension, with a mini-DH bike feel. While everyone I know who has thrown a leg over one loves them, that bike also features a very slack seat angle, making it horrible for actually pedaling up hills. (it’s no trail bike) 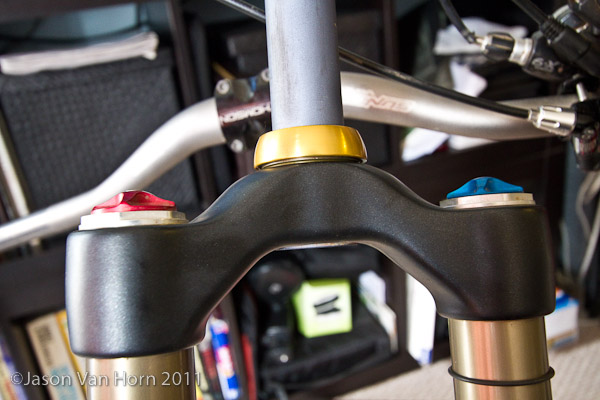 The Nomad in its stock carbon form is a sweet all around and extremely capable all mountain machine that can do it all. I wanted mine to lean towards the downhill side of the spectrum and spec’d coil suspension. 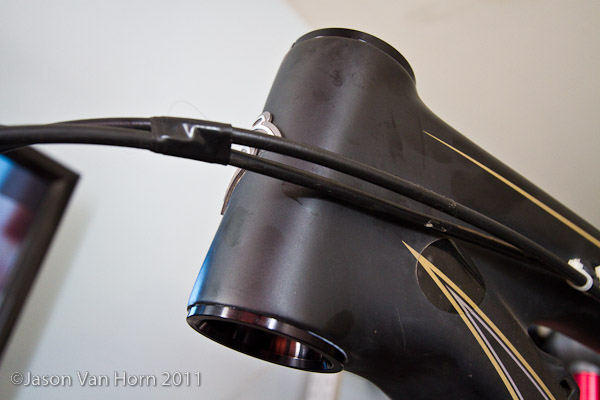 Profile of the lower cups

Anyone that loves to rip corners enjoys a lower bottom bracket height, and while the height of the Carbon Nomad is listed on the Santa Cruz website at 14″, mine in its static state measured in significantly lower with 2.35″ trail tires. This number is pretty abstract though- because Nomads are mostly sold as frames, every build comes out slightly differently, and this figure isn’t a constant. It’s almost as if it was just a random number picked from a hat. This is apparently a common topic of conversation even amongst the engineers at Santa Cruz, and not limited to the forums. The type of headset, axle to crown length of the fork spec’d, tire volume and additional factors all have an effect on the final static bottom bracket height.

With my initial build, my Nomad’s BB height was more like 13.7″ or 13.8″ , and this matches comparable bikes- the current Enduro from Specialized is listed at 350mm, or 13.79″ . Being the bike geek that I am, I’ve been researching options for getting it a bit lower. 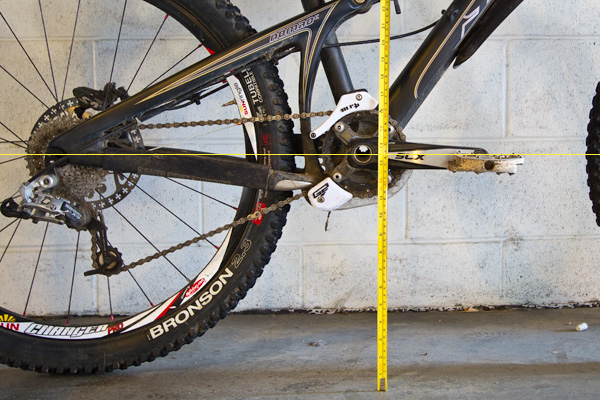 Option 1. Install an after market link, like the PushLink. The PushLink isn’t designed to actually lower the static bb height, but instead changes up the shock rate, and gives the bike more of a rising rate. (like the original Nomad, which was known for its DH performance) It also sits lower into its travel, and because of this has the feel of a lower bottom bracket. (and therefore corners better.) Since I don’t run a small ring, I likely wouldn’t lose much in the climbing way of things, which is one of the reasons Santa Cruz listed for updating the rate of the V2 Nomads. However, I like the way my bike climbs, as well as how it pedals. I haven’t spent much time on the original Nomads, so I wasn’t sure this was a fix I actually wanted. 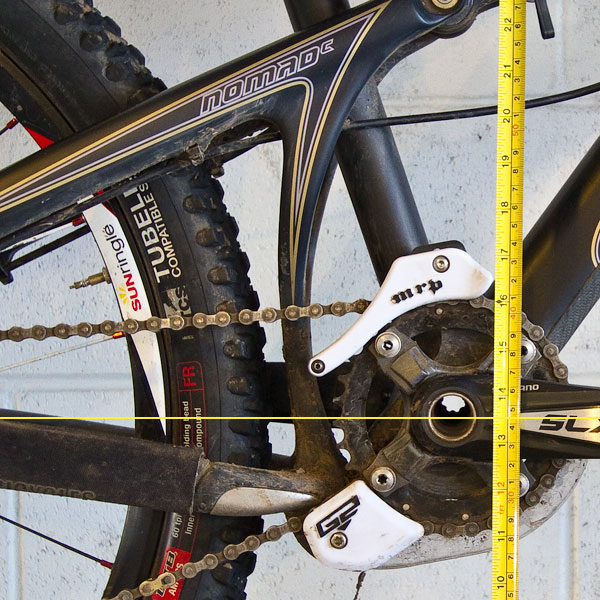 Close up of the tape measure

Option #3. A zero stack lower cup on the headset. By running an Angleset with the 1 1/8″ steerer and a zero stack (ok, not quite zero) lower cup, I was able to lower the headtube, as well as the bottom bracket. By choosing the 1.5º option, I’ve slacked out the fork, slightly lengthened my wheelbase, and I believe my bb height came down a bit more. (I’m also still looking into pedals to implement option #2, but that won’t effect my riding on days I’m running spds)

How does it ride?

I’m still getting used to my set up, but so far I’m super stoked on it. The bike still climbs awesome, and but now it descends even better. Having ridden DH bikes for years, climbing on a slack front end doesn’t really present a challenge to me, and I regularly out-climb riders on more XC-oriented bikes in the rough stuff, even with my 1×9 drivetrain. (running clip-in pedals makes all the difference on tough grinds) On long sustained climbs on steep grades I’ll usually just walk, but if I can walk just as fast as my buddy next to me grinding away in his lowest gear, I’m not missing out. 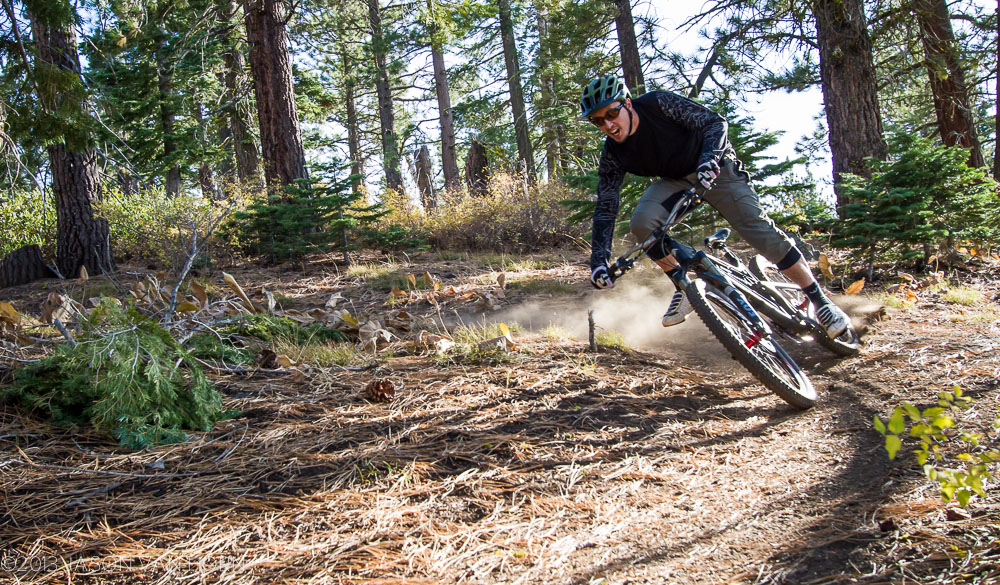 Drifty gnarface on the TRT.

One of the benefits of lowering the front end is that my effective seat tube angle is a bit steeper as well,  helping the effort during the up sections. While I run a 50mm stem for DH handling, my 29.5″ handlebar also creates a wider grip, and it makes it easier to keep the front end down on climbs. I’m currently running 30mm in spacers, which is slightly lower than my initial setup, and almost 5mm less than my previous bar height on my Trek Remedy. (the Nomad has a shorter head tube the the Trek) I could go lower, (which is apparently in vogue right now looking at everyone else’s builds,) but I can climb just fine with my current bar height, and I wouldn’t be able to charge down steep technical trails the same way, and that functionality is at the root of this entire build.

The lower bb height is awesome. Yes, I clip my pedals on rocks occasionally on rocky technical ascents— even with 170mm cranks. It doesn’t bother me though, it’s just part of the game. 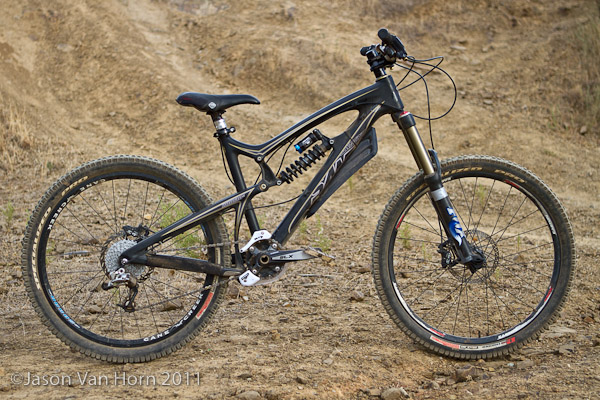 Although my headset doesn’t have play, there is some occasional noise coming from the headtube area, so I’ll be disassembling the headset and reinstalling it with even more grease to be on the safe side. Apparently this is fairly common with the Angleset, and there’s even a term for it that has been going around- it is becoming known as “gimbal knock.” After discussing it with a few other riders running a similar setup, it appears the best tip for eliminating this is to pre-align the gimbals on installation, then tighten the crap out of it. I haven’t totally wrenched mine down, as I was concerned about killing the bearings prematurely-do this with a King headset and it will develop a notchy feeling early in its life. (there is also a good amount of documentation on the forums, and there is a huge thread on RideMonkey) Since we’re about to embark on our last (hopefully next to last) roadtrip of the summer this week, I have a bit of wrenching to go to make sure my ride is free of issues during our mission to Moab/ Grand Junction. 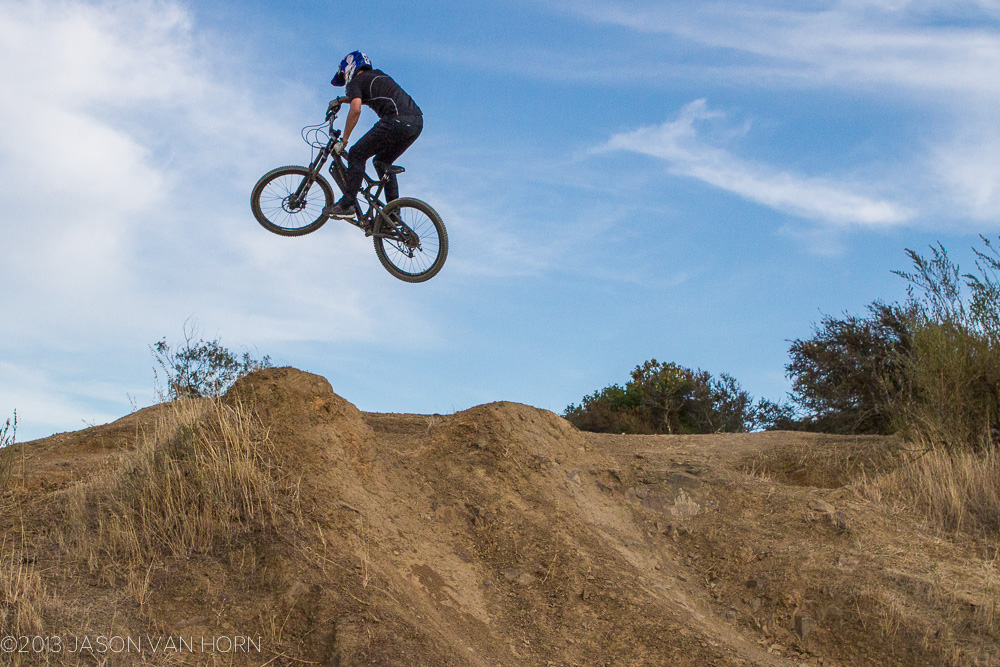 Feeling her out at Carlmont.