160mm of suspension travel is a lot more than the average trail rider needs to ride a typical single track trail here in the Bay Area. We’re known as the birthplace of the mountain bike, but with way more dirt roads than single track available to ride, it’s not a coincidence it’s the place 29ers caught on as well. Needless to say, six inches of suspension travel is a bit of overkill for a typical after work trail ride. However, in order to get the kind of geometry and bike handling many aggressive trail riders prefer, six inch travel all mountain bikes have been the only option until somewhat recently.

Banshee Bikes out of Canada was one of the first brands to offer the coveted “XC bike for downhillers” with the release of the Spitfire model a season or two back. A short travel (5″/ 127mm)  alloy frame, the Spitfire is notable for a slack head tube angle which makes it easy to manage at speed. Combined with a low bottom bracket, it corners extremely well with a feel reminiscent of a short travel DH bike. With a 140mm front fork, it has two shock mounting positions that offer a head angle in the 66.7-67.8° range. You could also run a longer travel fork to rake it out even more. For many aggressive riding trail riders this would have been the perfect bike for around here. However, being a smaller brand out of Vancouver, this bike has never been widely available in the states. 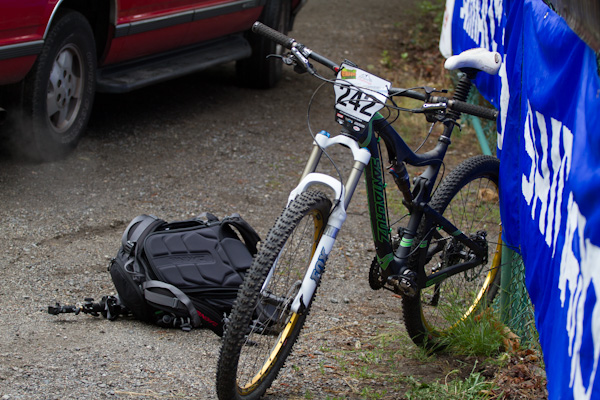 The Blur TRc is the official bike of the Oregon Enduro series for good reason.

With the newest addition to the Blur line up, the Trail Carbon, (henceforth referred to as the TRc) the Spitfire may never catch on. (ok, not a completely true statement, since the TRc will set you back almost double the price of the Spitfire) Since its release, downhillers looking for their ideal XC bike and enduro racers have all taken to it with a passion. Constructed in carbon fiber, the TRc comes in at under 5lbs. with a shock. Only slightly heavier than the flagship XC racing model the Blur XC carbon, the TRc eschews the traditional NORBA race geometry in favor of angles adopted from the popular four cross frame. Add a longer reach, and the result has been a  bike that rips turns unlike any other XC bike you’re likely to find. The option of adjustable angle headsets offer even more customization. The only drawback is the price. With a sticker tag of almost $2700 for the frame and shock, the TRc is a premium offering and a significant investment beyond the reach of the average rider.

Since riding a friend’s TRc, I’ve coveted one for myself, and recently managed to build one up. With a few hundred miles logged on the bike,  it is a bit soon to be posting a legitimate review of the Blur TRc, but I’m happy to report that its been everything I’ve hoped for:  it descends with much of the confidence I had while riding a Nomad, but on climbs the bike is capable of keeping up with lycra clad XC racers with the only thing holding me back being my current fitness. I’ve logged over 200 miles on it to date, with a few cockpit and component changes, and it is already my favorite trail bike. Ever. 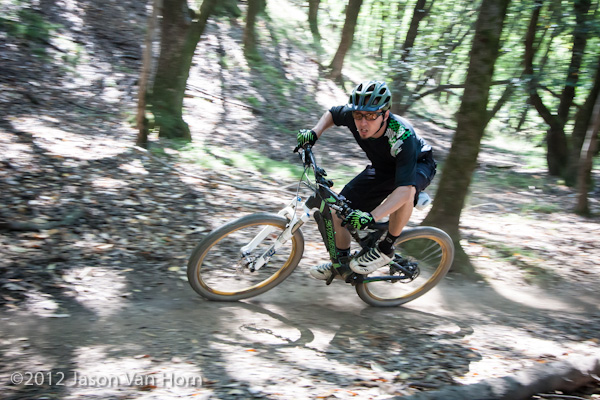 Cranking through a turn at China Camp State Park in San Rafael, CA.Yes I do have a kit that matches the bike, thanks for noticing.

While the TRc is available with a number of build kits at various price points, (starting at $4496 MSRP) I elected to assemble mine using a full XT build kit, with front and rear derailleurs upgraded to XTR to take advantage of the new features of the friction plus technology. (full disclosure: I coach mountain biking part time for Bikeskills.com and receive certain perks in Shimano gear.) I chose to spec shorter 170mm crankarms as they’re a personal preferance having ridden them for years on my all mountain and DH bikes. The TRc is known for having a nice low bottom bracket height, and because of this, 175mm cranks are prone to hitting pedals on rocks and roots of technical trail sections. While waiting for the 170mm cranks to arrive, I ran a set of SRAM X-9 175mm cranks and found this out for myself. After switching to the 170s, this hasn’t been an issue.

I’ve been running a mix of SRAM components with Shimano cranks and brakes for the last few seasons, and this marks the first build in recent memory where I’ve ran a full Shimano groupo. So far performance has been spot on, although I initially experienced issues with shifting of the front derailleur. If you work on your own equipment, you’ll want to spend the time reading the manuals, as things have changed a bit. The XT front shifter was configured for a triple; turning a screw to the double location resolved those issues. While in Ashland for the Enduro, I spent some time with a Shimano tech that gave me the 411 on ideal setup of the friction clutch and since then I’ve had a lot less issues with the chain dropping. I’ve also been debating for some time on whether or not I want to add a chain tension device. However, with the bike currently weighing on at 27.5lbs, I’m looking into ways to drop weight from the bike as opposed to changes that will add to it. For most trail riding the XTR friction clutch has been more than adequate. 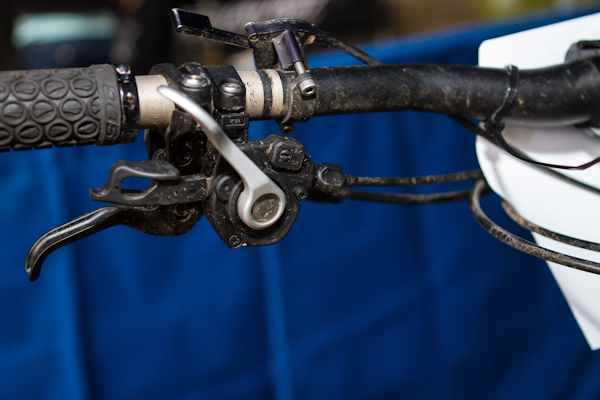 Made sure you have this switch selected for the correct configuration to avoid dropping your chain and proper shifting.

I’m a huge fan of the stopping power and feel of Shimano’s disc brakes. The new XTs are no different, and they continue to improve with each iteration. The lever has a great feel, and modulation is better than ever. With 6″ rotors (provided by Dirty Dog MTB, see my previous review here) front and rear I find I have more than ample stopping power with the light weight Sun Ringle Black Flag wheels. The rims of the Black Flag wheelset are a bit more narrow and flexier than what I’m used to, but they have been holding up well to date, and have only required minimal truing. The drawback to the narrower rims of the Black Flag has been trying to get them setup tubeless. I’ve been unable to get tubeless tires to seat without the aid of a compressor; I eventually gave up and have been running a 2.35 WTB Weirwolf and a Wolverine 2.2 in the rear, both with tubes installed.

Fork wise I’m running a 2011 Fox Float RLC with a tapered steerer that is turning on Cane Creek bearings.  The fork was initially set with 150mm of travel. While the frame can safely handle the 150mm of travel, I’ve recently reduced it 10mm to 140mm. Santa Cruz recommends running the fork set at 130mm to match the rear, but I like the slight addition of travel as it raises the BB slightly and keeps the head angle closer to 67º. Although 150mm was a bit tall, many riders may prefer it, and I quickly got used to the taller ride height. However, I’m extremely happy with the current setting of 140mm. If you’re looking for more of a traditional trail or XC feel, you may prefer the recommended 130mm setting. (or run a Talus and you can change your mind regularly) Lately my headset has been turning a bit tight; a wet weekend of riding in Ashland, Oregon didn’t agree with it, and it is ready for some service.

I also run an adjustable height seat post. For me this has never been an option. Although they can be a pain in the ass at times, they’re more than worth it, and not running one (in my mind) on this bike would be silly and only hold back the potential of this machine. I’m currently running the Gravity Dropper Turbo, but plan to swap it out for the new Fox DOSS model. The frame has tabs for fastening the cable for the post, and I run the cable under the shock mount for a fairly clean look. (I still need to shorten my front brake line though, don’t hold it against me) 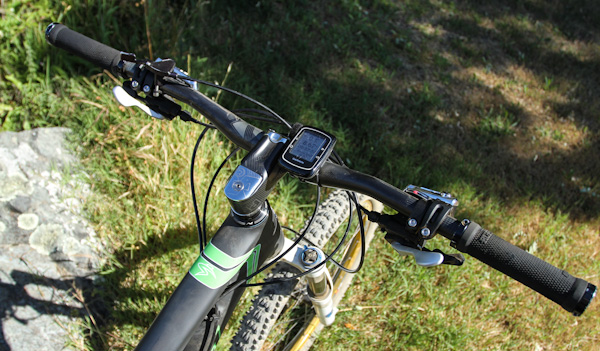 At 5’10” I typically ride a medium size frame. I also own a Santa Cruz Driver 8 and Nomad, both also in size medium. It stands to reason that with a longer top tube than the Driver 8 and Nomad I would be happy with a medium TRc frame. Unfortunately, I’m not sure this is the case with the TRc. While I’m certainly happy ripping down trails on the medium, I think I would be happier with the slightly longer reach of the large. I’ve spent a good amount of time reading up on the feedback of other riders, and have spent a lot of time deliberating on whether it is worth selling my frame in order to swap it out to the larger size. Normally I just look at the manufacturer’s numbers since I know my personal preferences, but since I’ve ridden a few large size frames with almost the same cockpit and spec I’ve found that I prefer the larger frame. Because I also prefer to run shorter 50mm stems with a relatively wide 29.5″ handlebar, the additional reach of the large would make it a bit easier to breathe on sustained climbs. If you are planning to build one up with more of an all mountain oriented build and have a lot of jumps on your local trails, or use it as a slalom racer as well as a trail bike, the medium will do the job. I’m a few days away from a road trip, and I’ve found the bike to be really fun with a DH oriented cockpit. I’m planning to swap out my XC wheels for the wider and stiffer AM oriented Charger Pro wheels with a tubeless setup.

For trail riding, I’ve found the Shimano Pro Tharsis 70mm carbon stem to work quite well with the 28″ wide carbon bar for all around trail riding. However, after trying my usual 29.5″ bars, I’ve found I’m happiest with the wider bars and don’t want to go back to the 28″s. Most will find 28″ bars to be more than adequate, but since I run 30.5″ bars on my DH/ gravity bike, 28″ just didn’t feel as good in fast turns. (I still run 28″ bars on my dirt jump bikes though) I’ve also changed back to the 50mm stem as well and have been really enjoying the mini-all mountain cockpit. While the bike doesn’t feel as good climbing, I’m more than capable of climbing everything I could with the 70mm, and the shorter stem makes the bike feel like a four cross bike while descending. With the roots of the TRc coming directly from the popular Blur 4x, this isn’t a surprise. Riders that loved the Blur 4cross will love the TRc, assuming they can justify the cost.