When looking to build up an all around bike that can serve as a do-it-all quiver killer, Santa Cruz and their Nomad is on a short list. I’ve talked to more than a few riders that have sold every bike they had just to build up this ride as their only bike.

With the introduction of the new carbon frame, the Nomad reportedly is 567 grams lighter and 20 percent stiffer than the aluminum  version. Having spent some time on a VPP bike last year and being unhappy with the suspension performance of an air shock, I swore away from VPP, but the weight savings of the new carbon frame also means that one could spec a coil shock at a minimal weight penalty. My friend Evan has the first one I’ve seen in person and this thing is pretty hot. He built it up at a spec not far from what I would choose, took it out for its maiden ride yesterday. (It isn’t dialed in quite yet – as you can see the cables are pretty long, and he was changing shock settings all afternoon)

He was nice enough to give me the opportunity to give it a quick spin on Hide and Seek in Sandy- and she felt good. Check this bad boy out: 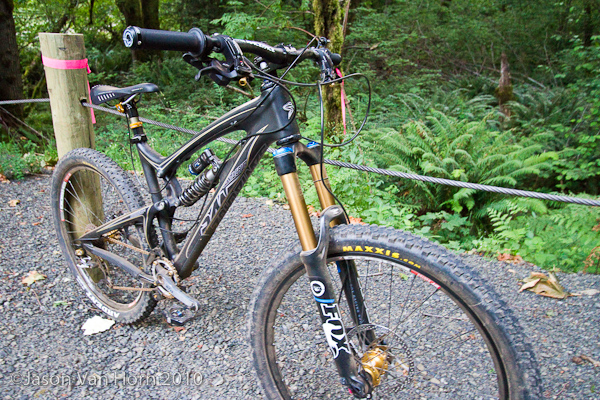 The new carbon Nomad is a pretty sweet ride.

You have the admit, the gold accents on the stanchion tubes and hubs that are carried over to the rest of the bike are about as bad as it gets with the bling factor. This is one bike you wouldn’t want to leave out side of 7-11 unwatched while you are inside getting a Slurpee.

No idea on what the weight actually was, but it felt close to what my Remedy in its current light weight trim felt like after doing the heft test. It definitely got me thinking- the shorter top tube Santa Cruz bikes have would definitely open this bike more for light freeriding and jumping, and the coil shock essentially eliminates every issues I had with VPP. In fact, I’ve love to see a straight up shoot out between this bike and a carbon Remedy with my personal spec… 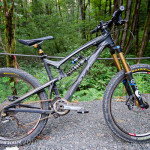 Click here to see his pics just after it was built up.

Updated: 8/26/10 Lightweight all mountain radness doesn’t come cheap. I just got a price list for the Nomad.