Ashland, Oregon is known best in mountain biking circles for the riding in the water shed on you guessed it- Mt. Ashland. It’s now the site of a Super D/Enduro race that is growing in popularity every year. The Rogue Valley has a variety of other trail options as well, making the area a great place to be for off road adventures. There are even a number of bike-friendly concrete parks, as well as a BMX track, located just several exits up the freeway. Add to that all the additional recreational options like ORV areas and skiing/ snowboarding in the winter, and the local rider has a pretty full plate year-round.

We can only imagine that this is the main reason for their neglected bicycle skills park. According to the original website, things first started moving in 1997, when local riders lobbied the city of Ashland for a sanctioned space to have to ride. It wasn’t until the last part of 2004 that the permanent site was established, following the construction of the water treatment plant. I personally recall days spent digging and riding in the previous site with my brother in a nearby lot that was an official temporary jump park site. 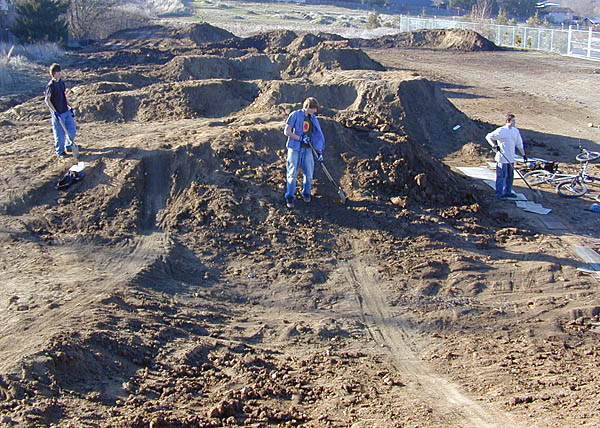 Riders shaping the faces during the construction in 2005. Photo: Alex

Eventually – almost 7 years later, the city finally gave the thumbs up to go ahead with the project. Unfortunately, many of the original riders that had lobbied for the park had moved on and out of the area. Like others, my time in Southern Oregon came and went, and by the time construction had begun, I was already a Bay Area resident.

Sadly, rider support fell apart at this critical time. Whether it was a conflict of personalities, or lack of a clear design and plan for the park layout, only half of the dirt placed at the site (upwards of 80 dump truck loads or more) was moved and shaped enough to be ridable. However, a small group of riders continued working on the project, establishing a website complete with a timeline a documented history of the efforts made to create the park. Like the park, the site is still available for viewing. (AshlandJumpPark.org) 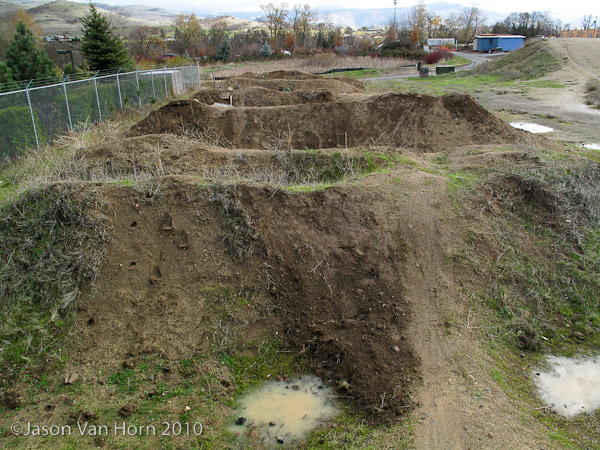 The second half of the jump park, which was never completed, taken November of 2009 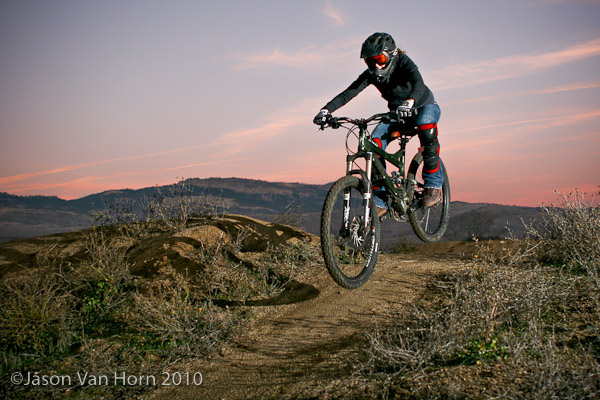 Several years later, the park still remains only half completed. Numerous reasons have been cited by local riders on why this is, with the close proximity to the local sewage treatment plant and the resulting odor being number one. According to Clifford with the Southern Oregon Freeride Association, the main reasons their group don’t have anything to do with the park are as follows:

The city pretty much gave us land they knew nobody wanted, and no shade. I think people’s interest would be piqued with good dirt, a water source, shade, and location location location… My 2 cents. 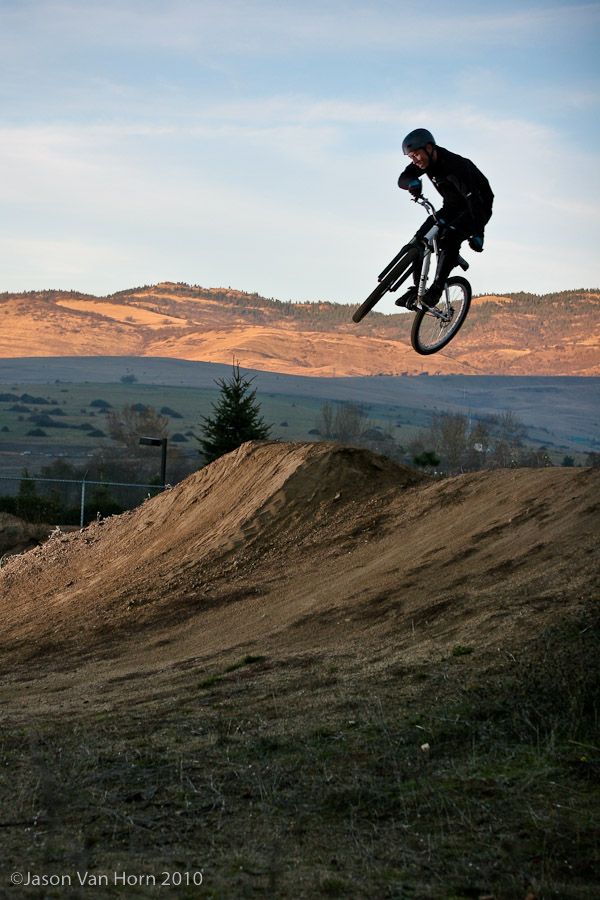 This may possibly change now that Mr. Roberts, one of the initial parties has joined the group as a board member. Many of the locals also complain of the dirt provided, much of which was left over from other city construction projects. 75% decomposed granite / 20% clay / 5% rock, the dirt is definitely not crash friendly. That said, we’ve seen dirt jump parks in other areas, especially the southwest, where the local dirt jump scene is thriving, with the same soil mix. 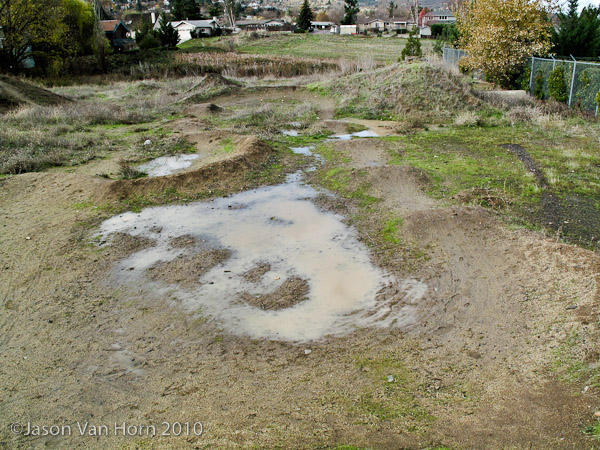 The pump track area before a build session. Shot November 2009.

We stop in on the site from time to time to see if any progress has been made, but short of the main line, little has changed. The intermediate section becomes more like a spine jump line every year as the lips are reshaved, but never added to. Although the dirt is actually very workable in the off season, the local riding community seems to remain apathetic about this site.

In fall of 2009, my brother and I stopped by for a session, and decided to take a stab at getting the pump track line to work. The line was never completed to the point where it flowed, or was fully ridable without pedaling. Our friend Koa came out to join us, and two days of work later, we had a ridable pump track. It still needed work, but we hoped a bit of progress might inspire others to pitch in. If this pump track or the jumps were built up to its potential, it would be a sweet spot to gather after local bike races, and you could even hold a pump track comp. 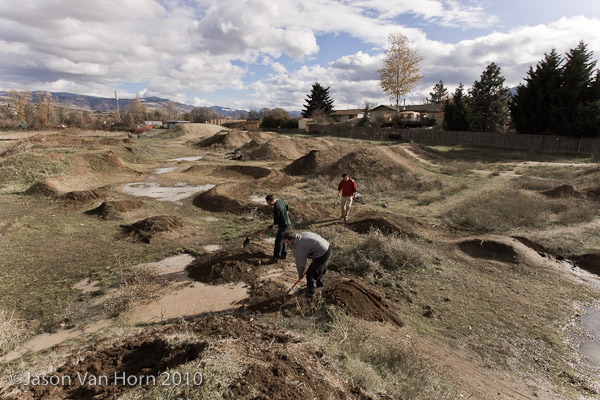 Izaak, Koa and myself work to make the pump track pump-able. Taken November 2009

Only time will tell whether the local riding scene will adopt the park, or convince the city to offer them a more idealized location.

Not all bike parks work. Whether it is a weak design, or flow that just isn’t there, it takes a community of supporters with hands willing to get dirty combined with individuals with a strong vision to achieve the dream lines heavily commented on the forums of PinkBike and the like.

What do you think? Are Ashland riders simply spoiled? Are you an Ashland resident, do you think this project was a success?  What do you think happened here, and what would you do if this was your local park? Clearly there are some motivated riders in the area, based on this news clip by local TV station. They are willing to risk citations driving earth movers into the watershed to build jumps, why don’t they want to build here?  Is the site really that bad? If this site was located in a dense population area like where we currently are in Oakland, I’d like to think I’d be here all the time and I believe others would too, making sure it was an awesome place to ride. However, we have two local parks here in the bay area, Calibasas and Pleasanton that also could have significantly more potential. Remember, its only dirt, it can be changed.

What does it take?