If you’re a hard core 29er fan, you would have been stoked at this year’s Sea Otter. In the expo area the emphasis was heavy on the big wheels, and just about every manufacturer has jumped on the big wheel band wagon with newly launched offerings. Even SRAM was into it, with SID 29er shirts identifying employees in town from the ‘Springs.

This was the first year in a while I’ve been to Sea Otter without a specific agenda, other than to just hang out check things out. Other than to hobnob and touch base with friends I haven’t seen for a while, I didn’t come rolling in with any specific goals. Which meant I was also free to wander around drinking beers on a sunny day. Nice.

RideSFO Boys (and AT) as usual, in the house and up to their usual shenanigans.

The weather in Monterey was sunny, in contrast to many a Sea Otter of seasons past. Unencumbered with shotlists, or specific events I felt required to shoot, (there are always a million and one photographers running around anyway) Inga and I walked the pits looking for the latest and greatest offerings from the industry. Out of everything we saw, it seemed that the emphasis which so often is on the downhill side of things to swing back to the trail riding side of the spectrum. And of course the whole 29 thing. It seemed that everyone had a new bike featuring the big wheels on display, with lots of carbon frames and even more carbon bits everywhere.

The stoker elected not to go along for the ride on this box jump to airbag attempt. The crowd of course, booed- chicken!

Amongst the usual Sea Otter releases was Shimano and a new XT gruppo. For the typical rider it doesn’t mean as much these days, since the only time you’re upgrading groups is during a new bike purchase. Although if you bought a new bike this year, your stuff is dated now. (sorry) If you haven’t been paying attention, there is currently a shift going on to move from a 3×9 drive train to a 2 or 3 x 10 drive train. Personally, I hate front derailleurs, so I consider less gears up front a good thing. (It’s isn’t the front derailleur I really dislike as much as loosing the chain constantly. We have a 2×10 SRAM X-9 drive train on hand that we’re planning to use on an upcoming trail bike build- review coming down the pipeline)

Ibis has another Mojo out, and it still has a steep as hell head angle, but now features a tapered head tube so you can slack it out to a proper geo with a Cane Creek AngleSet. Santa Cruz also re-released their popular staple, the original Blur, which also received the tapered head tube treatment. (our money is on the new Blur TR, which would be money with a 150mm fork, and in fact is how some of the SRAM guys are testing it)

It was probably for the best, as the long wheel base and lack of momentum didn't quite have what it took to take off.

Carbon fiber continued its proliferation as well, as Easton had their newest offering in plastic hoops, the EC90 on display.

We checked out the Titus booth and said hi to Shiggy (he kinda is out there, but is a super nice guy) to get the scoop on the ailing brand. Last we heard, Titus was chapter 11, and had been purchased by UK brand Planet X/ On-One. Titus looks to be going consumer direct from here on out. More than a few small manufacturers are going that route; should be interesting to see how that works for them.

In the demo/ play area, things were changed up a bit. College Cyclery made the  pump track and jump area again, but there was a shift towards wood features over dirt.

Little and big jumps for kids of all ages.

It makes perfect sense to me though- I never understood why so much labor was put into creating a mini bike park setup that would last less than a week. If all this effort went into the existing bike parks we already have, they’d be pretty sweet. (take the poorly designed Calibasas Park and the Pleasanton BMX Park, that is over due for some love)

Wood ramps are consistent and don’t require constant maintenance. The best line at Post Canyon (in Hood River, OR) has wood take offs, and it’s one of the best big bike jump lines in the northwest.

The drop in start for the jump line

In addition to a jump line for the jump jam, there was also a new hybrid event that took place Saturday afternoon, the Speed and Style event. Part pump track race, and part jump comp, participants started down a ramp to a wood kicker, busted their best moves, and ripped though a pump line.

The speed portion of the course 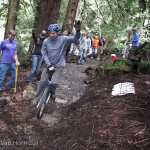