Whenever I think of the riding in Marin, I have mixed feelings about the whole place. On one hand, it’s the birth place of mountain biking, and there is fantastic terrain located a relatively short distance from a major population area.  However, as we all know, only  the smallest fraction of it is legally accessible to bikes. Really thinking about it gets me pretty agitated, so I just try not to. Progress in creating new MTB friendly multi-use trail there feels like it happens at a snails pace, especially compared to all the new trail construction going on in the northwest.

During a ride last week, we started at a popular Marin riding destination: Camp Tamarancho. It is often the starting section to what is and can be quite an epic ride, provided one leaves the comfort of the hand cut single track maintained by the local Boy Scouts, and is willing to put some fire road time in to connect to other not-so-bike-friendly social trails.

A fire road section in Marin

One of the most popular routes here is the Boyscout loop to the Solstice Trail. However, on our ride we found our usual route to be temporarily closed while it was under construction. Our group was a bit disturbed to see the beginning section of single track had been widened to the width of a small road.

This section of trail used to be a narrow single track.

Raw trail construction done with a bobcat never looks pretty while it is underway, and in a few years, the trail will likely be much more narrow than the current four feet or more. At the moment, the route resembles a bike park, with all of the fun parts taken out.

It turns out the entire section of trail is currently closed. After doing a brief bit of homework, we found the following threads, as well as a report on the trail realignment (PDF) of what is currently being called the 680 Trail. Here is a gallery of the route, currently under construction. 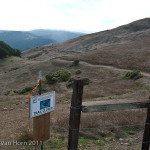 There is a thread on the trail construction that you can find on MTBR here. Based on the past history of Bay Area multi-use trails looking more like roads than single track, I can’t blame anyone that is upset about the current state of things. It is frustrating that fun and challenging single track here seems regularly become sanitized.

Putting the trail builder hat on, if we take a look at the trail alignment objectively, the route looks to be very sustainable, with a lot of thought going into the actual alignment. There is a lot of care going into the construction; those bridges we see there don’t come cheap, and there is a lot of rock work there already. We can see that the construction utilizes many best practices approved by the Forest Service in the trail construction, as described by IMBA in their trail building manual, “Trail Solutions.”

However- it’s disappointing to see that none of the progressive elements you’ll find in new destination trails like the Sandy Ridge Trail on Mount Hood in Oregon currently look to be implemented. All the turns and switchbacks were exactly that- switchbacks. Loose, off-camber, with none of the bermed flowy goodness that is currently getting raves in the northwest. It doesn’t look like the trail builders are interested in enhancing the mtb experience that is being so fully embraced in the northwest, which is sadly exactly what the bay area needs right now. Or perhaps what we’re seeing is the result of compromises with multiple user groups.

Although a few new trails have popped up here and there, none of them feature what we as mountain bikers travel hundreds of miles at a time to experience: flow. Personally, I believe strongly that if just 3 miles of flowy new trail were to come to the bay area, it could start a revolution. Like the man said, “build it and they will come,” and then they’re gonna clamor for more.

What this trail needs, is a injection of the “Wells Pro Flow” from IMBA Trail Solutions. How about it guys?

A few highlights from the forums:

Looks like from the report they want to shut down the best parts in trade for their new “masterpiece”. This is a direct quote from the Trail 680 report:

“Another consideration is the potential for conflict with existing trail users in the
project vicinity. The social trail known as Solstice Trail, which descends from
Loma Alta Open Space Preserve down to San Domenico School, is a well known
and frequently used trail that advanced level cyclists seek out because of itʼs high
degree of challenge, flow and specific type of trail experience. The proposed 680
Trail Alignment utilizes a section of this existing trail, crossing it six times and
wholly incorporating a short section of it. It will be challenging to change the
historic pattern of use along this section of trail and the existing users will likely
be upset over the loss of the specific type of experience it provided. These issues
can be addressed through the design and construction of the new trail, closure of
the existing trail segments that will not be adopted, and outreach and education
of the user groups.”

The good news is that the Solstice trail, for the most part remains intact. Another excerpt from the forums:

The “trail segments” subject to permanent closure that the 680 report refers to do not include portions of Solstice. Solstice is on San Domenico property. From page 18 of the NegDec: “District staff does not have the authority to prevent the use of existing social trails on private property.” The “trail segments” subject to closure mentioned in the NegDec are portions of Meditation Trail that were not incorporated into the alignment of the 680 Trail. Those are on MCOSD land and are subject to closure.

Parts of the 680 trail DO overlap w/ the some upper portions of Solstice- I was up there a few week and can confirm this first hand. Since 680 is closed to trail users until it is completed, the only legal way to access solstice is by taking the Fire Road up from San Domenico and then cutting left at the old skid road that ends at the rusted and shot out old truck- or you can try your luck climbing up solstice!

When 680 is finished, we will have a nice little loop for those who want to hit Solstice multiple times. 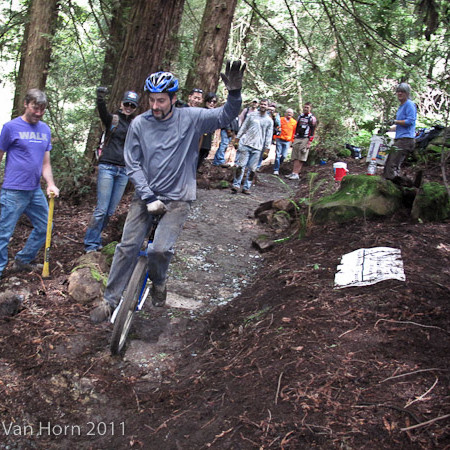