Ermygawd, I have the new 650b Nomad.  Since I’ve built it up, I’ve received more than a few Facebook queries about it, asking how it rides. My first answer? This bike puts a smile on my face. Yes— it is awesome.

I was in that boat a few weeks ago; once I decided I was about to pull that trigger, I did the same thing, hitting up a buddy whose opinion I respected and asked for his take as well. His enthusiastic response was the push I needed to go for it, so I’m passing the buck here.

During this time I read every article on the new 650b Nomad, searching Google for “650b Nomad Review” and mostly found the press camp reports from Chile. Most of them said the same thing: ‘the new Nomad shreds downhill, is a super capable descender, aggressive trail bike, yada yada yada’. But although it seems that half the reporters took their test bike home with them, they’ve been too busy out riding them to post follow up reports.

I thought that was a bit lame, so I decided when I built up mine, I’d get to it right away and post my impressions of the bike as they happen. Fair warning: I might also edit some thoughts as I spend more time on the bike, but I’m planning to create new posts as I go. I’ll try to get to the main points early; those that want to read what could end up being a lot of stream of consciousness crap can read further to see if my experiences are inline with what you’re hoping for from the bike. 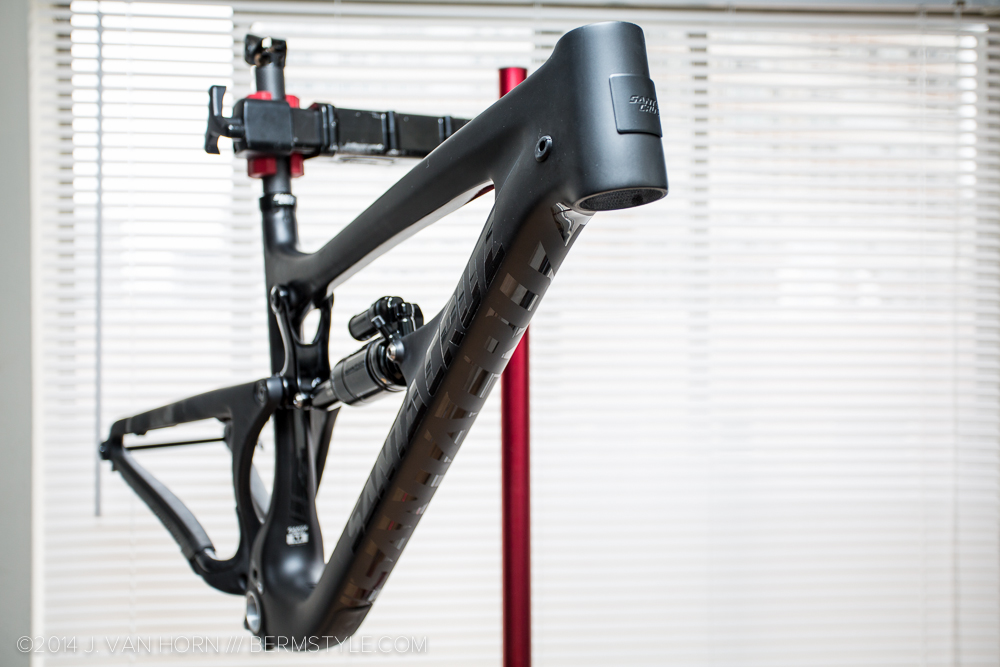 My motives for purchasing the new frame were fit oriented, and my concern was more about losing the all around capability found in the Bronson. In a nut shell, here are first impressions of the bike: 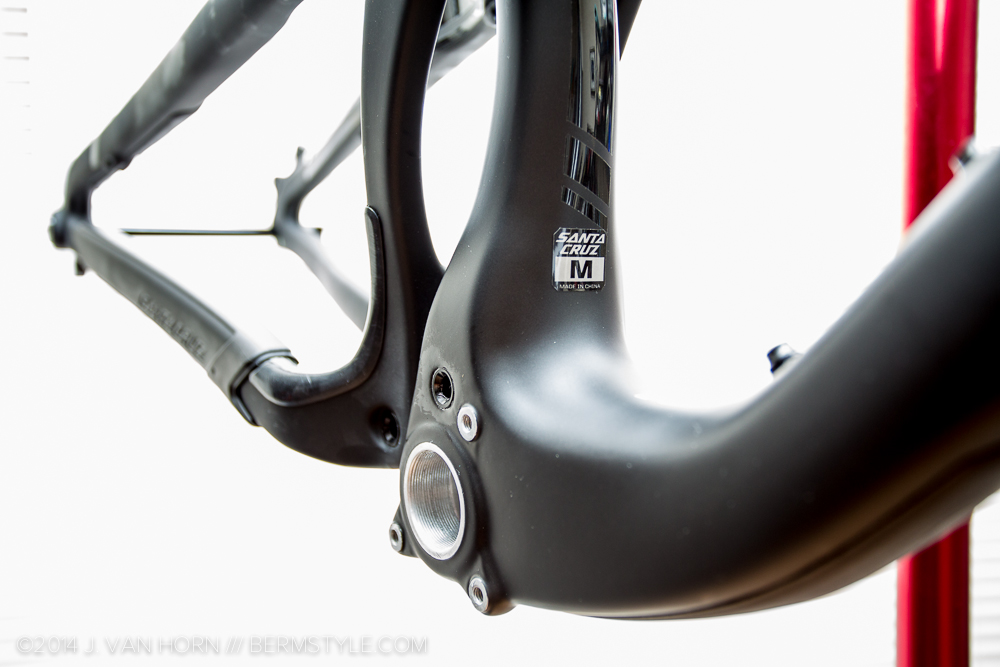 Bottom bracket detail of the Nomad

A bit of background first: I just moved from the 650b Bronson C (size large) to the Nomad, (size medium) and I’m super stoked. I also have a Blur TRc I’m keeping in the quiver to offset the much heavier feeling 650b Nomad for long rides on less technical terrain, which I think makes for a pretty sweet quiver. We also have a 26″ Nomad C Mark II that we’re keeping around for my girl friend Inga to ride, who coincidentally just built up a Bronson. We’re going to make her Nomad as “DH” as possible to differentiate the two.

And now a disclaimer with disclosure: I’m a fan of what Santa Cruz Bikes does down there in Santa Cruz. I also am privy to occasional opportunities to receive industry pricing on SC Bikes. But I also get similar perks with a few other sweet brands, and it should be noted I chose the Nomad. 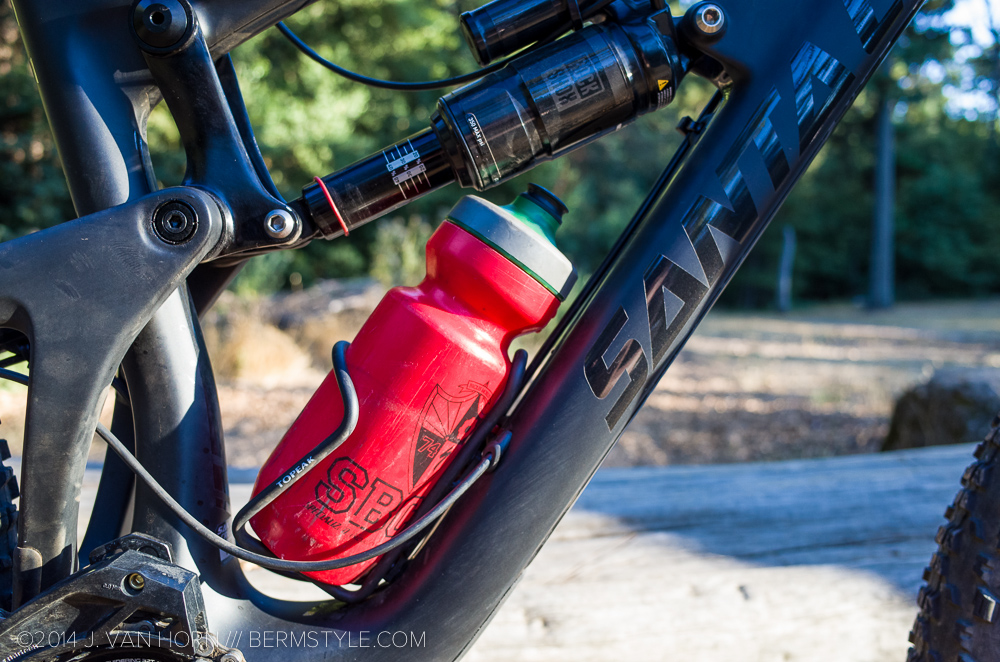 That said, I have a tendency to subscribe to a family of bikes. I used to have a Specialized Demo 8 that I paired with an Enduro. From Specialized I jumped to Intense and ran a Tracer VP for a season. The Tracer was a sweet bike and this is were I discovered how much I liked the pedaling characteristics of VPP. However, it never felt as capable as the Enduro or the Trek Remedy I began running back to back. The Tracer (with the poorly spec’d stock rear shock) was less than amazing, and I ended up keeping the Remedy, then added a Session 88 DH rig to the quiver.

A season later, when we moved back to the Bay Area, I made the jump to the 26″ Nomad C Mark II and built it up with coil suspension, replacing the Session and Remedy as a one bike quiver solution. I’ve been rolling SC Bikes for the last few seasons.

I really enjoyed my time with the Nomad Mark II in its 26″ wheel iteration once I added an AngleSet and lowered the bottom bracket. I always wished it had shorter chainstays and a steeper seat tube angle though. (not to mention a bottle cage) A lot of my riding buddies felt the same way, and some of those riding buddies also happened to be riding buddies with the fellas at Santa Cruz Bikes. 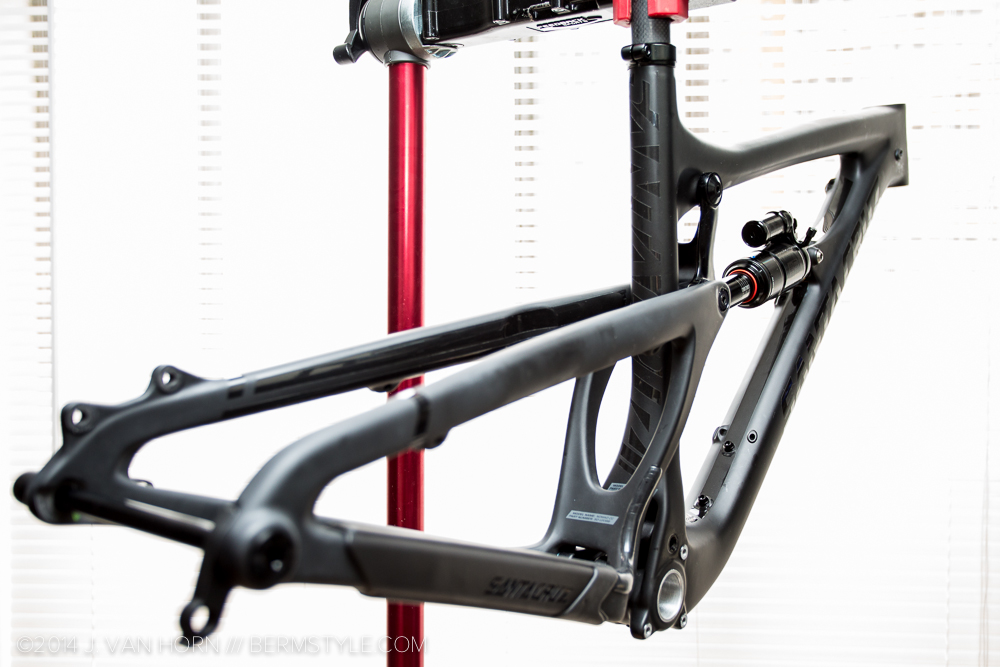 More detail shots of the 650b all black stealth Nomad

With the release of the newest iteration of the 650b Nomad c, it’s clear they heard us loud and clear, because out of the box everything checks out. The improvements to the new version of the Nomad make it a much more capable bike than its predecessor all across the board.

Shorter chainstays? Yes— 17″ long, (short for VPP at least) but you can’t run a front derailleur. I always ran a 1×9 on mine and with the new 10 speed 1x wide range aftermarket hacks, this is a total non-issue. I’ve always enjoyed the handling on Specialized’s Enduro, due to the shorter stays. We’re finally more inline with that geometry with the length moving to the front center. The 26″ Mark II has stays that measure close to 17.25″ or so, which are about the same as the Bronson.

The seat angle was the other item holding the previous iteration back when climbing. I’m feeling well placed on the new model with the 74.2º SA. I currently have my saddle set up clamped pretty neutral, in the middle position of the rails. 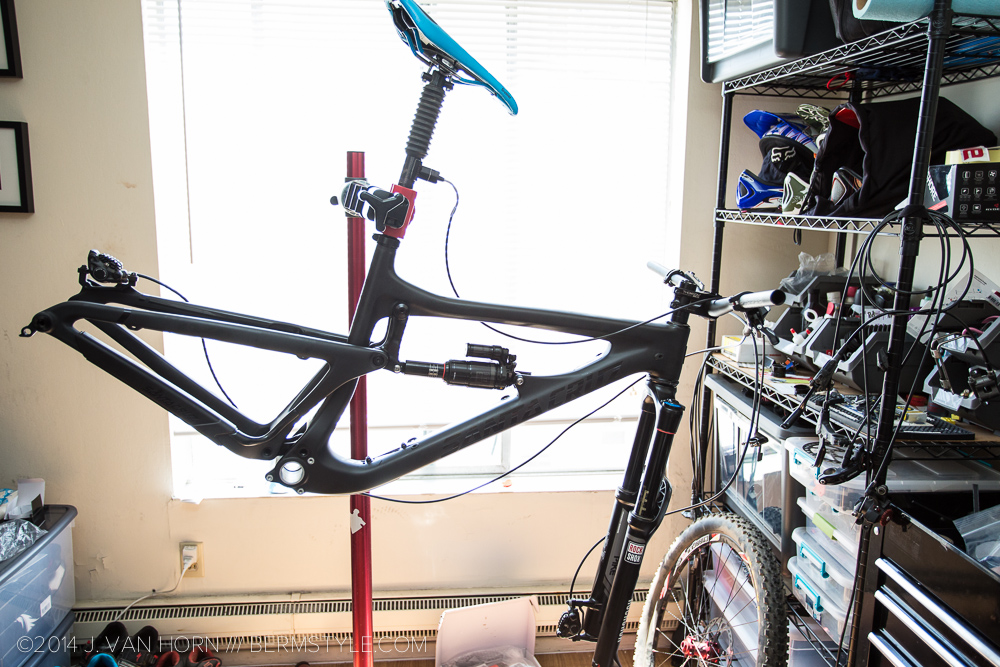 The 65º head angle feels dialed. On the 26″ iteration, I ended up changing it back to a 1º offset to end up at 66º. I’m not sure if it’s the larger wheels, or the fact I’m coming from a large Bronson, but 65º feels awesome on this bike. To be clear, this is NOT the bike I would recommend to most riders. The Bronson is better suited to the typical trail rider looking for an all around aggressive trail machine. Unless you prioritize descending prowess, which is probably why you’re still reading this.

26″ vs 27″? The bigger wheels roll faster. You can corner harder. The new bike with its shorter stays handles better to me. Sorry 26″!

The new Nomad starts where my modded Mark II Nomad left off and as an aggressive trail machine getting pushed into DH bike territory, feels better in every way. I have yet to take it to dirt jumps or ride it in a slope style context though. 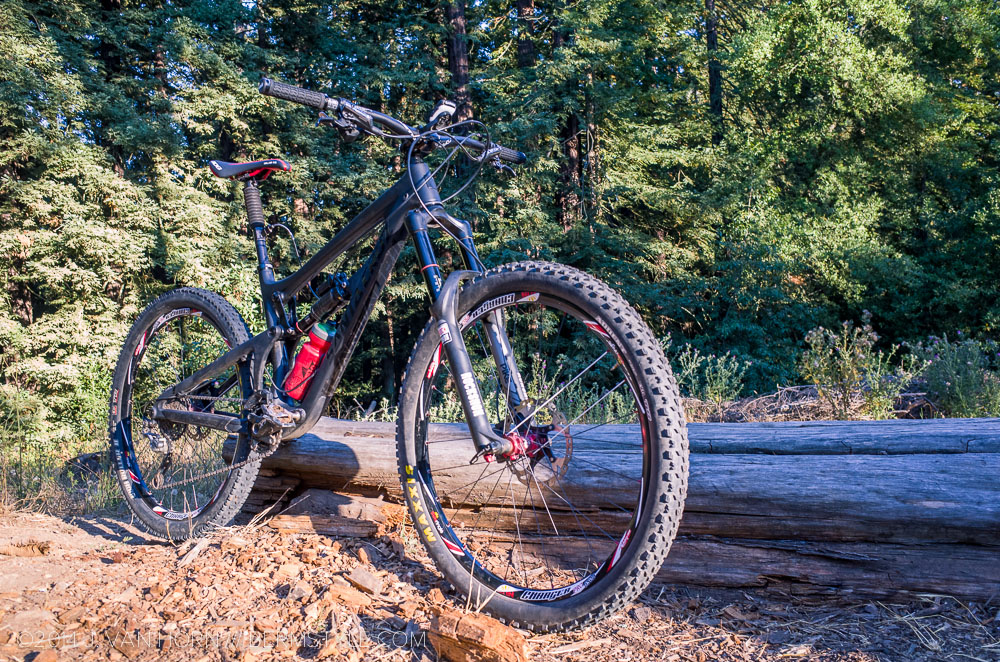 Bronson C vs the 650b Nomad

I had a hard time getting to love my Bronson. Unlike a lot of my other bikes, it didn’t feel natural to me right away. I spent most of my time on the Bronson with a 150mm travel Pike, and I think it would have come alive with a 160mm front end conversion, which I put off acquiring until I had the Nomad on order. I heard similar feedback from others that had gone to a Bronson from the Nomad Mark II.

The motivation for me in moving to the new bike was more of a fit issue. I was also considering the new Intense Tracer T275, which was also inline with the reach I wanted.

It wasn’t until I put a 30mm stem that I started feeling confident on the large Bronson. With the 30mm and the long frame I was effectively running a forward geometry style setup which made for a fast bike in a straight line, but I felt there was a really small sweet spot for (aggressive) cornering, and if I was tired and wasn’t on it, I would feel really off.

I never got that feeling of confidence riding it I had on the Nomad. It would be interesting to try a medium Bronson with a 1º AngleSet, but I already have the bike I want. In the first five seconds on the 650b Nomad I had the feeling I was missing. My first turn on the bike was a loose 90º right covered in bark dust and I drifted exactly where I wanted to and exited on point.

The Stealth black color blows away the Orange accents on the initial Bronson. But that’s personal. I really don’t like Orange. The Miami Vice color way is sweet too, but I really don’t want to have to buy a new kit. 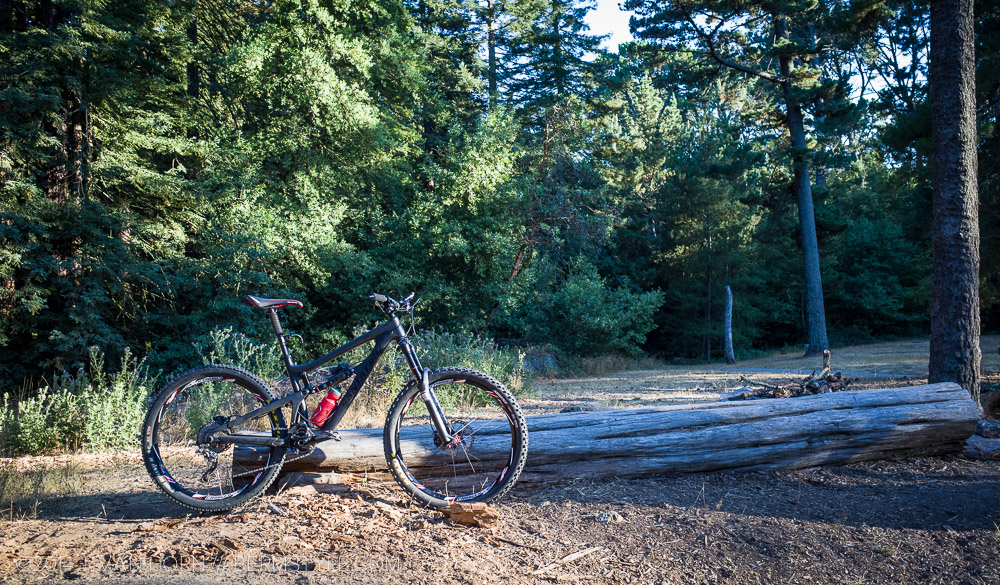 The Blur TRc was often referred to as the trail bike for downhillers. The new Nomad is like a DH-like all mountain shredding machine for aggressive trail riders. What I’m loving about it is that it feels like a DH bike I can take trail riding. Except you can pedal it up hill. Getting back on the TRc it feels light and whippy, and not in a good way. The contrast between the two feels like night and day at the moment. Now that I’m back on a size medium TRc, I think I’m pulling the flexy 32 fork and swapping it out with a stiffer 34. At the moment I’m in the honey moon phase with the new 650b Nomad though, and will be doing all my destination rides on it. I’m not doing any rides from the house though; I’m driving to the trail head on this beast.